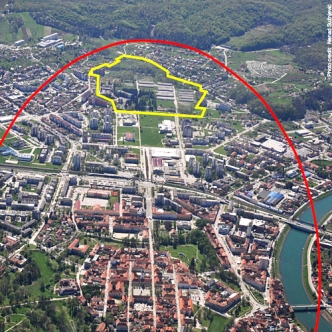 Karlovac is a city of rich industrial heritage that forms an important part of local identity. The city still has the characteristics of a productive city with a vital economy of a classic type. The main urban axis Luščić – Novi centar (new city centre) – Zvijezda (star-shaped historic core) – Gaza – the Korana river is planned to be an elongated zone accommodating central urban functions and recognizable public spaces. Karlovac would like the productive city topic to be applied to this site by exploring themes such as creative industry, culture factories and opportunities for new forms of work and (self)employment. The goal is to transform this currently derelict site by producing an urban fabric with all aspects of desired urbanity, which includes mixed and adaptable uses, new typologies, improved mobility, a sharing economy, the use of renewable sources of energy (including geothermal) and the creation of new public spaces.

Karlovac, the ninth largest city in Croatia, is situated on an important transport corridor and at the strategic location that was the major reason for its foundation exactly 440 years ago. Such strategic position required, until recently, the presence of numerous military facilities. The former military barracks Luščić are located on the main urban axis and represent a great opportunity for future urban development. At the strategic site level, the task is to provide new ideas for the physical design of the main urban axis. Proposals should consider ways of creating the necessary spatial links, addressing the problem of barriers caused by national transport infrastructure and improve the relationship between the central city area and river banks. As regards strategic site programs, functions that will be complementary to the city public facilities and services and lead to the creation of new jobs and economic development are expected.

The project site is the area of the former military barracks, surrounded by areas of high residential density. The existing structures within the project site are dilapidated and mostly constructionally unsafe. The evaluation of the architectural and construction properties of the existing building does not indicate that there are reasons to preserve them. Part of the site is covered with high-quality vegetation. According to the provisions and guidelines of the General Urban Development Plan, the following uses may be planned for the project site: public facilities, business uses, hospitality and tourism uses, open public spaces and residential use. The City of Karlovac wishes to receive proposals focusing primarily on public facilities of importance for the City and for the densely populated area surrounding the project site. This is also one of the obligations assumed by the City when ownership of part of the land of the former barracks was transferred to the City by the State.

Given its location in the urban fabric, the project site has to be planned in such a way as to accommodate high-density mixed-uses. Appropriate programs are expected, which will contribute to economic development, for example in innovative activities and services, production of culture, creative industries, connection of economy, education and research and activities that are not spatially dependant (digital and similar industries). Since the area of the former military barracks is not connected to the surrounding residential areas, it is necessary to design strategies of spatial integration. The result should be a coherent urban fabric connecting the project site with the surrounding residential areas where there is a shortage of social infrastructure. Proposed urban structures must be highly adaptable to changing needs over time.
Participants are encouraged to create development scenarios that include temporary uses for spaces which probably will not be realised in 10+ or 20+ years. In the light of local negative demographic trends, housing facilities are not the priority. However, innovative housing typologies that can contribute to making affordable housing for young people, and flexible structures for new forms of life and work (work from home etc.) are welcomed. The proposed solutions should ensure improved accessibility and mobility. A high level of accessibility for pedestrians and cyclists must include not only physical accessibility, but also urban environments that are attractive to pedestrians and can contribute to the total reduction in the usage of cars. Energy efficient solutions, which may include the use of geothermal energy (sources of which have been found in the vicinity of the city), are also encouraged.

In view of the announcement in the media of the project for continuation of construction of the central urban ring road (its part related to the correction of Luščić street), can we get a draft of the planned traffic layout in order to incorporate it into the competition entry, with possible modifications to achieve the connection between New center and area of former barracks Luščić?

We will upload the concept design of Luščić street (which touches the perimeter of project site) from 2016 for which a location permit has been obtained.

In view of the announcement in the media of the future bypass road around the historic core (Zvijezda) that will pass through Gaza neighborhood, located in the study area along the city axis, can we get a draft of the planned traffic layout in order to incorporate it into the competition entry with possible changes to achieve a complete traffic solution?

The design of this street project is in progress, but we can provide a conceptual design that is the basis for the elaboration of the project in question. The ultimate goal of this process is to acquire construction documents and in the near future to build the street, which should take over the transit traffic that is now passing through the historic core (Zvijezda). We consider that, for consideration of the strategic area, the possible route of the street in question is sufficient information.

As the competition brief emphasizes that the space of the historic core (Zvijezda), or the area regulated by "Zvijezda“ Urban Development Plan (UDP), is not the subject of the competition, we are interested whether smaller interventions are possible, or light modifications of the above mentioned plan for the realization of spatial connections with the surrounding area along the central city axis?

It was not intended that the competitors design the strategic area in detail, including the historic core, as the Detailed plan is a result of a long-term interdisciplinary work and has been certified by the competent conservation institute. However, the proposals of smaller, clearly argumented amendments are possible as a result of the analysis of the broader scope / urbanistic axis, its rethinking and consideration of land use at the strategic level, but interventions in the conceptual design of UDMP (Urban Development Master Plan) and Zvijezda Urban Development Plan (UDP).

It is not clear from the competition brief to what extent it is necessary to comply with the currently planned transport corridors and land use envisioned in the Urban Development Master Plan of Karlovac. Please comment on the possibilities of redistributing or changing the use and traffic layout in Gaza neighborhood.

In the study site, suggestions for modifications are possible, without any intervention in the UDMP conceptual layout, and in line with the expectations set out in the competition brief related to the study site. The Gaza neighborhood, in the northeastern part of the urban axis, should be considered strategically in the context of areas that, like Luščić, once had a military purpose, and nowadays is unused and state-owned.

Given the media coverage of the current development project at the location of Nazorova, what are the expectations of the competitors in planning the location, as one of the important ones along the central axis?

For now there is no existing development project for the location in Nazorova Street (residential/public space at the crossroads of Tomislavova and Nazorova streets and Prilaz Vjećeslava Holjevca), but there is an idea and initiative from a private real estate owner to change UDMP at the mentioned site. Suggestions in the context of questioning the urban axis, possible uses, roles and networks of public spaces, etc. are possible but not binding as the final result of this competition should be the basis for the future UDP Luščić Center.

Suggestions in the context of rethinking the urban axis, possible uses, roles and networks of public spaces, etc. are possible but not binding as the final result of this competition should be the basis for the future UDP Luščić Center. It is possible to propose changes in the perimeter of all plans beyond the scope of the project area, but should remain within the framework of the UDMP provisions.

The project area at the Luščić site is in contact with the areas covered by the current urban plans. What are the possibilities of modification, redistribution of land use within the project site and the changes in traffic corridors within these zones? Specifically unbuilt zone D4 within UDP Luščić 1; unbuilt zones R1, D4, and unbuilt part of zone S3 within UDP Luščić 2.

In the immediate surroundings of the former barracks Luščić detailed plans Luščić1, Luščić2 and Novi centar are in effect (can be viewed through GIS on the official website of the City of Karlovac: https://gis.karlovac.hr/gis).

Within the scope of all these plans it is possible to propose changes that should remain within the framework of the conceptual layout of the UDMP. The marginal parts of the detailed plans Luščić1 and Luščić2 are intentionally included in the project area, given that the included parts are planned for public use (2 kindergartens and sports hall). The task of the competitors, in the area of the former barracks, is to plan mostly public and social uses, and the city's view is that it is necessary to reconsider the purpose and role of the surrounding space, so that the planned social infrastructure can be properly dimensioned and deployed in the competition entries. Such suggestions may in the future provide a useful basis for changing of the existing plans.

With regard to the announced removal of 16 buildings and removal of part of the diseased trees, can we get map data on the removed trees and the plan of removing buildings within the area of the former Luščić barracks?

At this point, the City of Karlovac carries out maintenance work of the barracks area - now property of the City of Karlovac (cp no. 2185 /1) - with the intent that through temporary measures (in the period of implementation of the Europan 15 competition and later during drafting of UDP Luščić, after competition results) safety is ensured so the barracks are open to the public for walking and temporary use. With the final goal of introducing the use planned in UDMP, it is planned to temporarily retain a few buildings and to remove the others (13) according to the expert assessment and removal project. The competition solution can provide for the removal of all buildings without restriction, but may also foresee keeping of some of the structures according to the prize-winning design.
We will provide the plan with the markings of the removed trees and buildings foreseen for removal in the first stage.

Can we get the integration of the geodetic survey on the area of the former barracks Luščić in the wider area, ie the overlap with the plan of the cadastral municipality Karlovac II?

We do not currently have rights with the Geodetic Administration regarding the use of cadastral bases for the entire cadastral municipality of Karlovac II. Since this is a wider area that is anticipated to be processed at a strategic level, we consider the attached maps (HOK) to be sufficient.

The competition entry can review the rules on the height of the building, but the competitors should make sure that it does not deviate from the basic conception planned by the UDMP, in which the high buildings are not a rule but accents in the space emphasizing the urban axis.