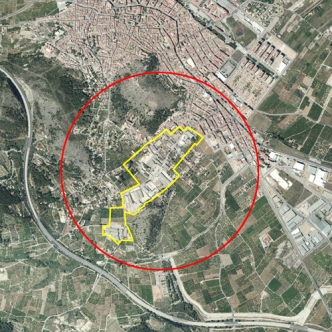 Oliva City Council, in response to the future challenges for its urban planning, wants to regenerate the Southern edge of its main urban core, an area known as "Els Rajolars", and employ various transport modes to improve its connection with the rest of the municipality and the different supramunicipal transport grids. The site is an old and largely abandoned industrial zone, with a powerful identity projected by former brick factory equipment and facilities (heritage-listed chimneys, kilns, large drying areas and buildings). This urban area, planned for residential usage, is in a strategic location: a transition zone between the city and the market gardens, and also between the city centre and the important natural mountain environment. It is also close to urban areas with serious vulnerabilities (the old town, La Carrasca), making it an alternative development zone for Oliva.

The municipality wishes to transform this degraded part of Oliva, taking into account the identity of the site and its surroundings, to generate a productive urban fabric. The traditions and location of this area make it perfect for the promotion of functional diversity (residential-productive). Proposed innovations should be linked to the municipality’s main traditional production sectors (agriculture, derivatives from agriculture and industry) with a view to the diversification of the production and labour market, currently heavily dependent on the service sector. Oliva City Council is looking for new feasible urban dynamics which apply economic and environmental sustainability criteria, respect for the area’s architectural and engineering heritage, a mix of uses, citizen participation and encouragement of high-performance job training.

The advantageous geographic location of Oliva has helped it to attract new ideas for future development, most of them linked to leisure and tourism. It benefits from the macro-infrastructure of Valencia and Alicante (harbours, airports, services, etc.), both an hour's drive away. Oliva is also located at a central point midway between two district capitals, Gandía and Denia, 30 minute’s drive away, and it is the gateway to hinterland districts.
In the 1950’s, this site began to be used by several brick factories which supplied the building sector, and eventually became a large “industrial estate”. When the Master Plan was ratified in 1982, most of the ceramic factories were still in operation. However, envisaging their potential decline, this Plan outlined a transition mechanism for the area that permitted the continuity of the industries until their closure, at which point they would be transformed into residential land for free-standing homes.
At present, only one factory is still producing ceramic material. Small-scale initiatives (workshops, caravan parking zones, cooking, etc.) have been installed in precarious conditions on another. The aim of the Master Plan has thus not been achieved: most of the land is now abandoned, with a profusion of old industrial buildings in ruins or in a very poor state, large expanses of unused land where building materials were formerly dried and stored, ten heritage-listed chimneys, several industrial kilns, old abandoned houses and others still in use, some of them of some architectural interest.

The City Council is aware of the different demands of the property owners in the area, and intends to steer the conjunction of interests of stakeholders who could become involved, with a view to inserting production in the urban programme.
The action programme should respond to the basic issues that underpin the objective, the way it is put into practice, and assess the possibility of an initial implementation in the form of an emblematic project.
The aim is to decide what kinds of activities can be implemented in this area (and therefore the city) with a view to improving relations between citizens, taking into account their social roots. Other goals involve making the productive territory habitable, generating a residential environment and managing the tensions potentially generated by the new relations between production and urban life, integrating all the production cycles in the local and regional context, and articulating them on a larger eco-scale.

Are there any clay mines on the site area? Where is the clay which is recently under production on the site being mined?

The zone of old mines near the project area  has been restored mainly making terraces for agricultural use (plantation of orange Cf. circle 1 on the plan added to complete site file: ES-OLIVA-C-M2. Claymines.pdf

Most of the mines in disuse are abandoned from and by the closure of the activity. It is a challenge to recover with restitution. Cf. circles 2, 3 and 4 on the plan added to complete site file: ES-OLIVA-C-M2. Claymines.pdf

The only mine in use is linked to the production of the FangCuit factory. Cf. circle 5 on the plan added to complete site file: ES-OLIVA-C-M2. Claymines.pdf.