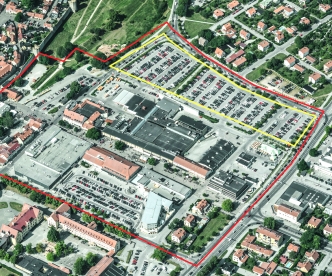 Since the beginning of the 20th century, the city of Visby has expanded far beyond its historic city walls. Östercentrum (The East Centre) was developed between the 1950s and the 1990s at the eastern gate of the wall, accommodating shops, office spaces and parking lots. The study site encircles Östercentrum’s main parking space and the commercial centre. The success of the commercial centre, as well as current restrictions in car usage and a shortage of parking spots inside the city walls, has generated a pressing demand for parking space in the area. The abundance of summer tourism transforms the neighbourhood into a vibrant district, while in low- season the open spaces leave the area with a desolate atmosphere. Östercentrum is the strategic node between the dense historic town and the scattered modern cityscape beyond. The main challenge is to develop the project site and study site areas so that the whole city can benefit from a new vitality within Östercentrum.

The municipality aims to turn Östercentrum into a vital mixed-use area in the city centre. New housing and well-designed public spaces could facilitate the development of the city centre, and better connect it to the low-density city districts beyond.
Public spaces, building heights and levels of densification need to be considered and regulated. Finding new solutions to parking spaces are vital for the survival of Östercentrum as a popular shopping district. Within the bigger plot, the red marked study site, the municipality is investigating the possibility of adding stories to existing buildings, in which new functions could be added.

The Hanseatic town of Visby was declared a UNESCO World Heritage site in 1995. The study site borders the town at the Eastern Gate and contains the commercial centre of the city, with parking facilities serving both Östercentrum and the historic town (the World Heritage site). Close to the city wall and Österport (the Eastern Gate), 19th century buildings connect the narrow streets within the wall to the modern Östercentrum district. The street of Österväg is today a pedestrian zone with a small shopping mall adjacent to the large parking area. The commercial buildings are generally one-sided, with shops facing Österväg street, and loading zones with poorly designed facades facing the parking area.

Östercentrum can become a harmonic transition, binding together the dense historic centre and the modern city, where the majority of the inhabitants live and work. The project aims to balance the urban with the suburban and the modern with the historic, creating diversity in equilibrium.
Östercentrum today is primarily active during the day. In order to inject activity, movement and vitality, it is important to consider the twenty-four- hour cycle as well as the seasonal differences and what they require from the small town of Visby. More housing in the area is essential for a dynamic populating of the emerging area. The project site also requires new uses, meeting places, active ground floors and passages that can create new connections within the study site. The project site contains 500 parking spots today that need to be relocated.
Development on the project site should relate to the entire study site of Östercentrum and the immediate presence of the city wall. The competition proposals are encouraged to give concepts for the site which include both housing and additional uses that could generate and promote new and dynamic production within Östercentrum.

Detailed architectural solutions for the project site (yellow border) are welcome, and important part of the competition. The rest of the strategic site (red border) could be part of the analysis, but should not be studied in terms of architectural proposals. Also read the site visit report for more detailed information in the answer to question 2.

Do the 350 parking lots have to be placed in the project site or is it possible to move them to the study site?

Yes, the 350 parking places need to be relocated within the project site.

70% (350) of currently existing parkings must be relocated within the project site. Quoting the brief, page 22, "The remaining part will be handled with another parking solution in another part of the area." Is it demanded to the design teams to identify this area on the final masterplan within the study site (red line)?

No, there is no need to identify new parking solutions for the remaining 30 % of relocated parking spots within the strategic site (red line).

In document STADSUTVECKLING VISBY: ÖSTERCENTRUM that is evoked in the brief, on many existing buildings is imagined the "construction on the existing buildings" (PÅBYGGNAD PÅ BEFINTLIG BYGGNAD). What does it mean? Demolition and reconstruction? Extension on top (what about the structure?)? Could you please clarify the needs?

The private properties and buildings within the strategic site (red line) could be rebuilt,  extended on top, or in other ways restructured. The architectural solution depends on the individual possibilities for each property and building. This is a task which is not part of the competition. The architectural proposals and solutions should be focused within the boundary of the project site (yellow line).