SITE 3 - USES & RHYTHMS
How Can Urban Rhythms Be a Motor for Urban Reappropriation?

“How Can Urban Rhythms Be A Motor For Reappropriation” was the question for Valencia de Alcántara, a rural town of roughly 6,000 inhabitants, 80 km West of Cáceres and North of Badajoz. The spatial opportunities were very clear, as the Junta de Extremadura asked for inspiring concepts for the city as a whole and especially for a number of vacant or largely underused buildings in the centre – a former slaughter house, a cultural centre, a foundation buildings almost in ruins, and the fortress that overlooks the town.
The rhythms were to be found in the imbrications of scales, from the architectural to the urban and regional, against the backdrop of elsewhere also well-known problems, such as a declining economy, the rural exodus, the demographic change and the question of the future of agriculture. The teams tried to engage dynamic interactions between the conceptual approach, the local situation and the different actors & stakeholders, and to transpose them in a storyboard, from macro to micro scale, and vice versa.

“The curious case of Valencia de Alcántara” tries to reactivate the town with a management system that is applied to what the authors call “urban containers”, i.e. currently vacant buildings or underused public spaces in the centre. They are meant to act as attractors by offering new kinds of facilities. New inhabitants such as elderly people, artists, farmers or young families shall be attracted by these services, both permanent and temporary, offered by the municipality as the central organising body. The concept is declined in variations, depending on the type of building, which rooms to be shared, abandoned buildings to renovate or dismantle and use as public spaces. 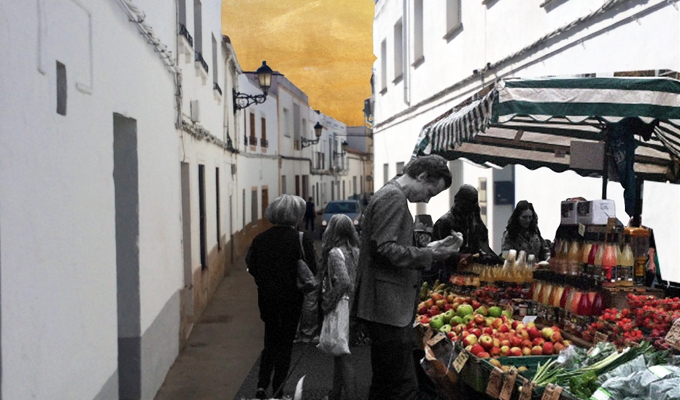