SITE 1 - ACUPUNCTURE
How Can The Revitalization Of Urban Fragments Induce A Larger Regeneration Of The Urban Structure?

Olivenza is a small rural town located approximately 22 km South of the provincial capital, Badajoz, and 10 km from the Portuguese border, in an agricultural territory marked by rising unemployment and a shrinking and aging population. The first workshop site proposed a large intervention area covering the historical city centre and its outer edges. Starting from a selection of existing buildings, partially vacant or in need of repair, the participants were asked to reflect on how the town might attract new populations and uses while preserving its local heritage. More precisely, the idea was to explore how to modify the program, use and adaptability of certain sites in and around Olivenza, such as the bus station area —a problematic collection of autonomous fragments consisting of a partially vacant community centre, a series of empty warehouses and an outdoor amphitheatre— or the San Francisco bastion site —a former convent partially occupied by an olive oil mill today— so as to establish the necessary conditions by which these locations might become elements of connection and urban activation in the future development of the city.

This proposal identifies two key potentials for the future development of Olivenza. The first potential is the linear void bordering the historical fortifications, which is an abandoned space today, a barrier between the historical city and the new neighbourhoods. Future construction in this zone is prohibited by law in order to preserve the visibility and access of the ramparts that form an important part of the city’s architectural heritage. The second is water. Unlike most towns in the region, which sought the protection of the hilltops to better defend themselves, the choice to settle Olivenza in the lower plains was due to the unique abundance of water at this particular location. Although this historical link to water is now largely absent, the wells and fountains that once forged the local identity of the town still exist, although currently not in use because the quality of the water is no longer acceptable for drinking.
The team proposes to link both potentials –void and water– to form a new landscape: the Dehesa Azul or ‘Blue Pasture’. The “Dehesa” is a traditional landscape in the Extremadura region: a sparse forest of oak trees for the grazing of pigs, bulls and cows, but which is also used as a social and leisure space, such as in spring, when it becomes a colourful flower meadow or in the orchards where one can find watering holes used for bathing. The team proposes to renew with this tradition of the Dehesa and the local waterscape as a framework to develop the abandoned void outside the city walls. This new landscape would enable new mixes of social and productive activity, combining leisure and tourism, while integrating pre-existing elements, such as the olive groves or the fortifications on which a public promenade is proposed at multiple levels. Standard irrigation systems are used to generate a ‘field of mist’ as a new social space in summer whereas selected historic fountains are reclaimed to develop more contemplative spaces fostering biodiversity and calm. The creation of allotment gardens in addition to the various orchards and groves takes advantage of the abundance of underground water and forms a transition between the city and the agricultural fields on the horizon. 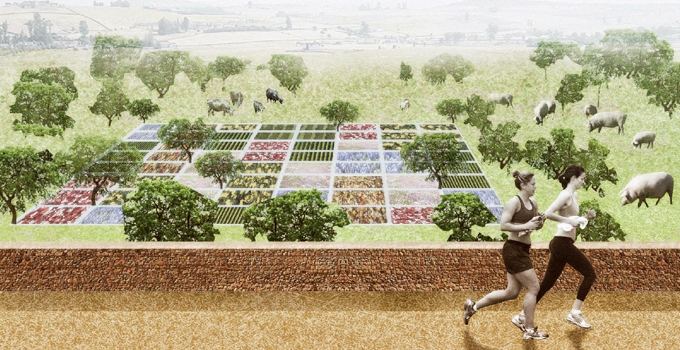