As a preamble to the Europan 12 Forum of Results in Pavia (IT) in September 2014, Europan with the DICAr (Dipartimento di Ingegneria Civile ed Architettura) of the University of Pavia proposed the E12 Winning Teams (winners and runners-up) to gather around amin issues and consider 3 urban itineraries, associated to 3 topics of adaptability to improve the coexistence of students together and with the local inhabitants. The participants, supported by a coach and local experts, had 4 days to design scenarios on the session topic –"The Adaptable City"– applied to the city of Pavia. They were divided into 3 main groups following the themes and sites proposed; each group had to produce 3 alternative scenarios on each itinerary, trying to answer major issues for the city.
Those scenarios were presented during the Forum of Results in the afternoon of Thursday Septembre 25th, bringing to light the relation between the winning ideas and the scenarios on the Pavesian sites.

Pavia is the capital city of a fertile eponymous province located in Lombardia (IT), near Milano; it is known for agricultural products including wine, rice, cereals, and dairy products. There are some industries located in the suburbs but the atmosphere of the city is better known as one of the most ancient universities in Italy, with 20,000 students in the University for 70,000 inhabitants in the city.
Improving the links between the students’ nomadic lives with their specific rhythms and the more sedentary life of the local inhabitants is one of the most important issues of the urban transformation of the city. How to overcome the fragmentation of the campus and residences of the students? How to adapt the city to this specific population keeping each group its own spaces but also finding places to share common spaces around facilities, public spaces and leisure?

Historically the University of Pavia was located in the very heart of the city, in a building with a series of courtyards that multiplied porosity and connections with the urban fabric. As it was in the mood of time, the new campus Cravino was built in the 70’s at the Western edge of the city, well deserved by a ring road but poorly accessible for pedestrians and bicycles. The campus itself is monofunctional, only occupied by university facilities that are closed at night and in the weekends, whereas services and student accommodations are missing.
At present, the transfer of the San Matteo hospital area located between these two entities raises the question of its future use and gives the opportunity to improve the links between the inner city and the new university campus. The task of the workshop was to create new connections, to requalify and secure the public spaces, to rethink the station area and its surroundings as well as to invest the wasteland at the back of the rail tracks.
In a common discussion with the group on possible conceptual approaches we identified three different strategies, developed by the three teams individually afterwards: A strong linear connection, a careful work on the two currently vacant contact spaces and a network of smaller relationships. These scenarios open a broad field of possibilities, thus opening a debate between the city of Pavia and its university about their common future.

Naviglio: A Chance of Coexistence Between Students and Citizens 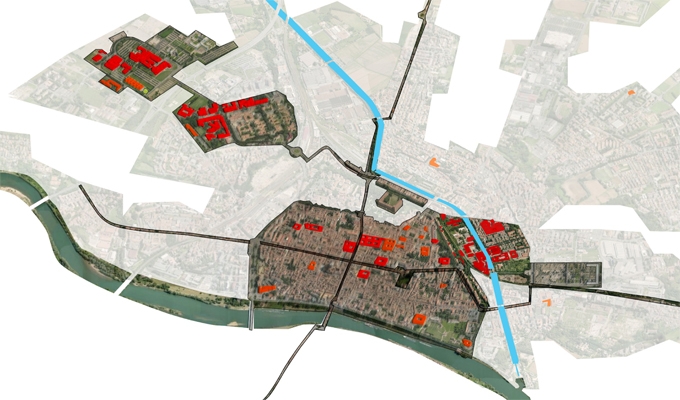 Large-scale infrastructures are not only the primary condition to network a territory through a system of links. More and more infrastructures have converted to important spatial spheres for different kind of activities and programs. Being part of the historical Lombardian system of naviglios (i.e. canals), the Naviglio Pavese represents an outstanding infrastructural project that provides the perfect example for testing modes of adaptability through which this infrastructure can become a space that fundamentally transforms the meaning and performance of a city, or even a region. The territorial scale of the Naviglio Pavese clearly provokes the tension between regional logics and local impacts. This unavoidable ambiguity becomes productive if we consider the context of recent urban transformations in times of shrinking resources. The disappearance of large-scale production complexes in city areas, the growing importance of sustainable and more efficient mobility-systems, new models of civic initiatives and the increasingly dominant role of nature and public landscape as identifying elements give waterline infrastructures such as the Naviglio the potential to fundamentally change urban conditions, which is a central concern among young architects.
The results of the Pavia workshop addresses this concern in very specific ways: “Gran Pavia – the Territorial Campus” focuses on the added value through local and regional cross-programming; “Ride & Park” reveals the extraordinary potentials of change that can be triggered by a more sustainable concept of mobility; “The Sleeping Beauty” suggests a new geography of sharing across the boundary of the Naviglio through a radical intervention in the university heritage of the city. 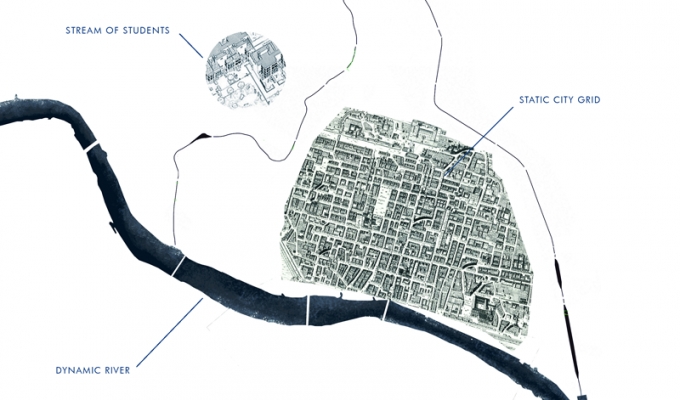 The Ticino River South of the historical centre of Pavia is meant to play a new role in the urban development of the city. Still, a certain number of obstacles prevent its integration in the city’s projects – particularly the risks of floods that have obliged the inhabitants of Pavia, from the foundation of the city until now, to build a very strong physical barrier (the fortifications) as well as a mental one between their territory and the river’s. The city of Pavia is better known for its historical heritage and its university than for its links with the Ticino. Besides, the district located South of the river is still regularly under water, as it is less protected than the city centre up North. All this contributes to hide the potentialities of the Ticino.
Today, Pavia wishes to turn towards this natural element that played a major role in its development without ever acquiring the importance it deserves. Some already use the banks for water or recreational activities and events are also sometimes organised, demonstrating a certain interest for this space. But the city wants to go further and this is precisely the issue of this workshop: exploring scenarios able to reinvent strong links between the city and the river. The question of sharing this potentially rich milieu lies at the heart of the investigations.

Project 2:
A Man Never Steps Twice in the Same River