SITE 1 - ACUPUNCTURE
How Can The Revitalization Of Urban Fragments Induce A Larger Regeneration Of The Urban Structure?

Olivenza is a small rural town located approximately 22 km South of the provincial capital, Badajoz, and 10 km from the Portuguese border, in an agricultural territory marked by rising unemployment and a shrinking and aging population. The first workshop site proposed a large intervention area covering the historical city centre and its outer edges. Starting from a selection of existing buildings, partially vacant or in need of repair, the participants were asked to reflect on how the town might attract new populations and uses while preserving its local heritage. More precisely, the idea was to explore how to modify the program, use and adaptability of certain sites in and around Olivenza, such as the bus station area —a problematic collection of autonomous fragments consisting of a partially vacant community centre, a series of empty warehouses and an outdoor amphitheatre— or the San Francisco bastion site —a former convent partially occupied by an olive oil mill today— so as to establish the necessary conditions by which these locations might become elements of connection and urban activation in the future development of the city.

Critical of the focus on tourism and cultural monuments as the primary means to regenerate the city, New Polarities explores a wider range of potential actors, uses and tools with the aim of developing new synergies between heritage, production and everyday life.
The fortified limits of the town punctuated by its nine bastions, provides the visible, physical, symbolic and temporal structure for a series of new collective spaces or ‘polarities’: a strategy of urban acupuncture that may be implemented as part of an incremental and non-linear process based on evolving needs and local specificities. For example, the team proposes to reactivate the former bakery in the San Francisco bastion and introduce complementary programs such as restaurants or lodging, so as to enhance the local identity of the site, already partially occupied by the olive oil mill. Similarly, the rethinking of the bus station area into a more integrated and attractive set of public spaces, proposes to connect the existing community centre, open-air amphitheatre and adjacent bastion within a new tree-shaded garden or collective ‘backyard’, thus restricting vehicular traffic to the west side of the community centre where a new street market for local production is proposed in continuity with the existing pedestrian streetscape. These spaces through their improved connectivity and programmatic intensification become potential ‘hotspots’ for activity and exchange: between the city and the region, production and consumption, agriculture and culture, everyday life and special events. 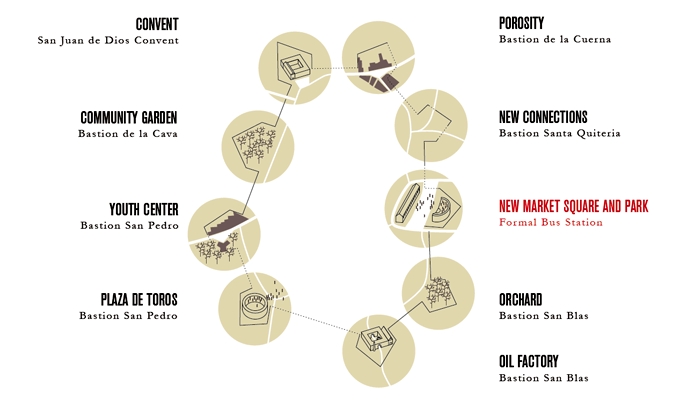