SITE 1 - CREATING AN INTER-CAMPUS DYNAMIC AXIS
Historically the University of Pavia was located in the very heart of the city, in a building with a series of courtyards that multiplied porosity and connections with the urban fabric. As it was in the mood of time, the new campus Cravino was built in the 70’s at the Western edge of the city, well deserved by a ring road but poorly accessible for pedestrians and bicycles. The campus itself is monofunctional, only occupied by university facilities that are closed at night and in the weekends, whereas services and student accommodations are missing.
At present, the transfer of the San Matteo hospital area located between these two entities raises the question of its future use and gives the opportunity to improve the links between the inner city and the new university campus. The task of the workshop was to create new connections, to requalify and secure the public spaces, to rethink the station area and its surroundings as well as to invest the wasteland at the back of the rail tracks.
In a common discussion with the group on possible conceptual approaches we identified three different strategies, developed by the three teams individually afterwards: A strong linear connection, a careful work on the two currently vacant contact spaces and a network of smaller relationships. These scenarios open a broad field of possibilities, thus opening a debate between the city of Pavia and its university about their common future.

The team states that there is an emotional distance between the campus Cravino and the historical premises in the inner city that has to be bridged by a new structure. The archetype of connection –a street– is used to revitalise the area and improve its functionality. The proposed link is a strong linear public space, based on the Mediterranean model of the “corso”, which starts from the structuring viale Matteotti in the old centre to connect it with the new campus via the suburb of Ponte di Pietra.
The project creates a continuous ribbon of vivid urban spaces between Cravino and the centre. A new lighting, landscape design and street furniture clearly underline the urban and user-based character of the intervention The central spine is declined in sequences with different atmospheres, each of them being connected to the lateral areas by transversal branches. The present enclave of the hospital is opened up, new programs and public spaces invest the area. The train station –at present an obstacle between the inner city and the western suburbs– is turned into an inhabited bridge mixing activities, leisure facilities, outdoor activities and a central park in the former Neca area. 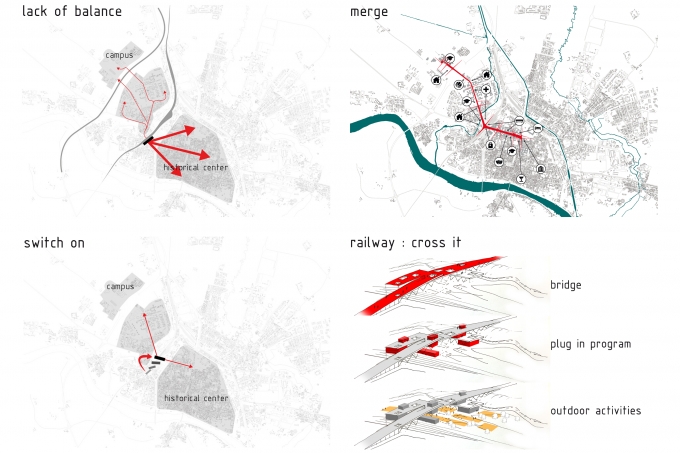 - Naviglio: A Chance of Coexistence Between Students and Citizens
- Sharing the Ticino River: Sports and Leisure