The particularly rich hydrology of the territory of Pavia was the basis of the team’s reflection. Besides the Ticino River, a canal –the Naviglio– and a small tributary river –the Navigliaccio– indeed surround the city and, although progressively integrated into its urbanization, they all nowadays constitute a visible loop on the maps of the city. This loop –concentrating the highest rate of potential project sites– becomes the guiding thread for multiple urban interventions. The various conditions of water on the territory are also considered trough this loop.
Some interventions are located on the riverbanks: for example the Arsenal site, conceived as a gate to the hidden garden of the Navigliaccio; or the “Palafitta”, a system of terraces on pilotis overhanging the natural banks; or also “The 3 Waters”, a public space Eastwards where the waters of the river, the moats and the canal meet. Other strategic interventions are set up along the canal and the Navigliaccio, aiming at better articulating the historical city and its outdoor territory. The scenario therefore manages, through a modification of the glance and the emergence of the water loop, to initiate strategic modifications for Pavia. 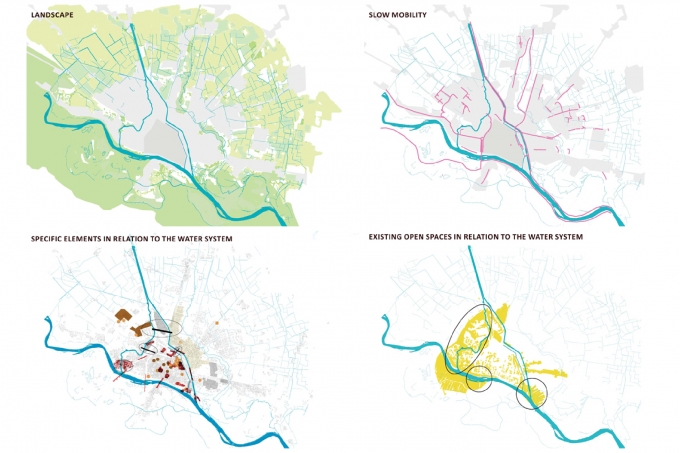