A traditional saying has marked Stavanger’s history: “Looking beyond the horizon”. The sea as the place to project dreams, trips and life. Fishing, the canning industry and oil have defined both its several growth phases and urban morphology.
Relying on culture and laziness; culture seen as learning from what others have already learnt; laziness seen as advancing from what culture has already set. Climatic consciousness becomes necessary at this latitude. The adopted strategy comes from certain intuitive thought patterns not directly related with architectural knowledge but, in this case, animal. Penguins will be the main characters of this brief story: their knowledge about how to gather on the ground floor to minimize heat loss and how to get distance enough to avoid casting shadows on each other. Towers, thus, maximize their solar exposure. Due to its weather, Stavanger uses its extra-size local housing typology to provide indoor places for socializing. As any social event never happens by chance, a public net of non-programmed equipped indoor places and open to invention is suggested.
Lervig is the result of its industry and harbour condition. Three canning typologies occupy the new Lervig: a) square cans (sardines): housing and mixed uses as penguin colonies b) round cans (tuna): facilities c) oval cans (mackerel): green spaces. The gaps between cans provide place for singular pieces like car parking, public buildings, bus stops.

After winning the competition, the team began a phase of implementation commissioned by Stavanger Municipality. The research covered a wide range of possibilities for the site. The most important realisation was the need to move the Park to the town’s unique southern seaside area (the precise location of the housing area). Surprisingly, the municipality excepted this switch, recognising the opportunity for the town of creating this south facing maritime park. So the team proposed a new project redesign involving this change. Stavanger municipality therefore decided to suspend its plans and rescheduled a new plan with the winning team ideas. The project was interrupted until this was done. Unfortunately, the new master plan modified the uses of the Europan site, so the client was unable to give the Europan team the commission. The project commission will be awarded to a Norwegian team.
In January 2013, the Municipality involved the team in the design of the urban park.
Their design seeks to integrate two different approaches on the concept of urban park:

1- Park as something mainly GREEN that “evokes” a natural environment.
2- Park as a public space where URBAN LIFE is celebrated collectively.

To articulate both views, the team make use of two characteristic features of the local identity: the industrial past linked to canned fish and the sea as a dominant element in the collective imaginary.
Therefore, the final design builds a multilevel landscape using the circle as the main geometric pattern in order to establish a direct relationship with its industrial past and cans of fish. Within this topographic system, large wooded parkland invade the periphery of the park acting as a “buffer” while the gray areas (made of concrete) constitute a promenade bathed by the sea with multiple levels. This is where a response to the identity of the Norwegian relationship with the sea occurs: the multiple levels of the different platforms are designed so that the dry landscape changes depending on the tides throughout the day, month, year, every lustrum or every half century. The design understands that this changing and surprising situation may reinforce this sense of belonging.
From a social point of view, setting these concrete platforms at different levels allows very different situations: jumping into the water, kayaking, fishing comfortably, picnics, concerts, etc.
The team submitted the preliminary study in May 2014. They are now waiting for political approval. 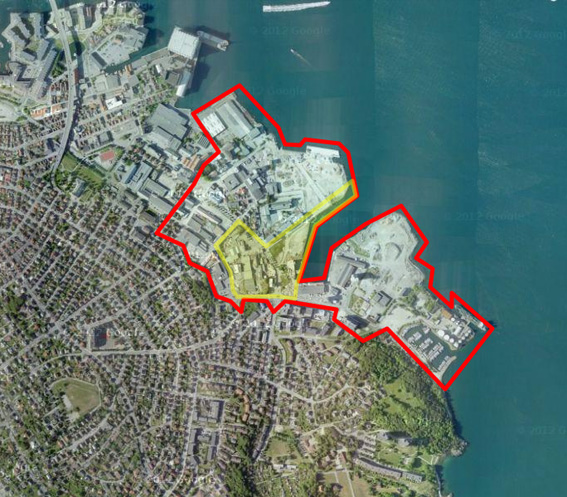 High towers with maximum solar exposure rise out of a Kasbah-like carpet composed of row houses, patios and greenhouses, forming clusters arranged in an informal  composition inspired by the flocking of penguins. 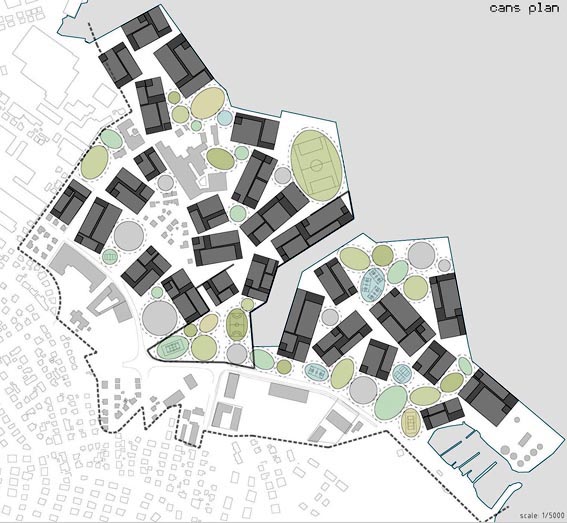 Climatic conditions guide the choice of an urban fabric based on a dense framework. The social interactions take place in the gaps between the residential blocks. 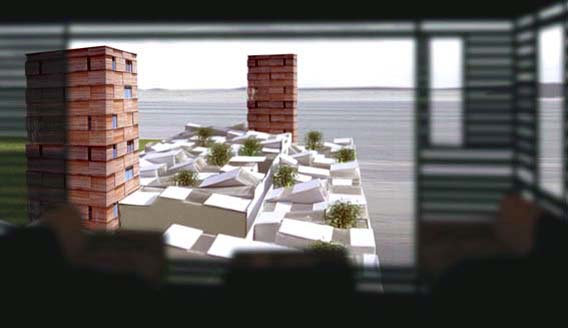 The project proposes to insert tartan-like built platforms within the regenerated harbor site, leaving space for inner private gardens. The patio scale is put into relation with the coastal horizon. 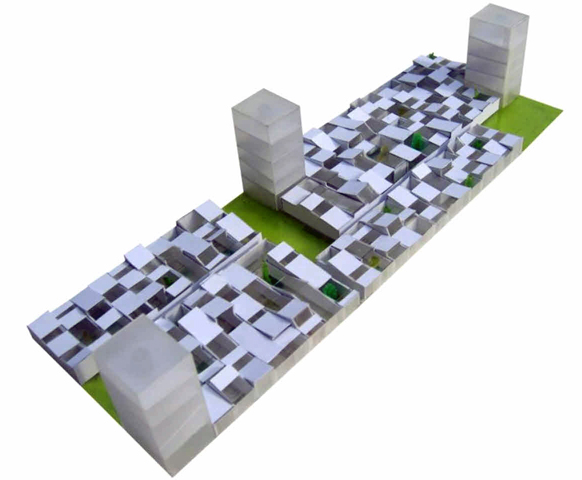 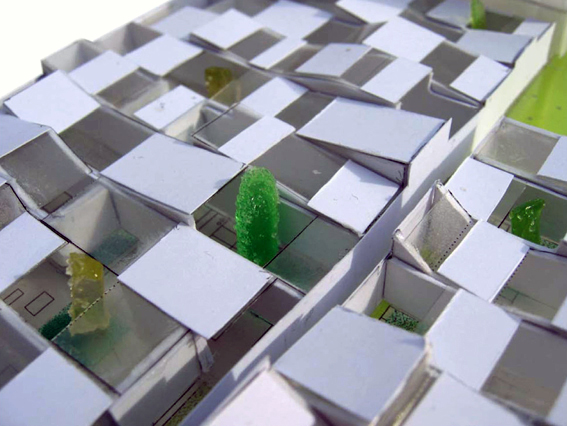 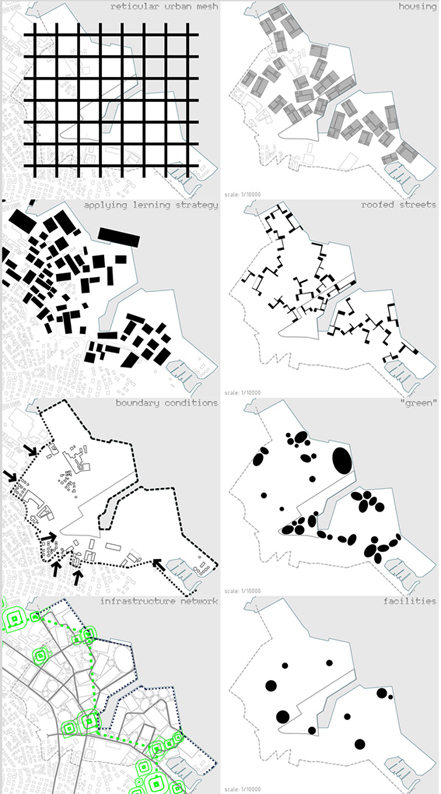 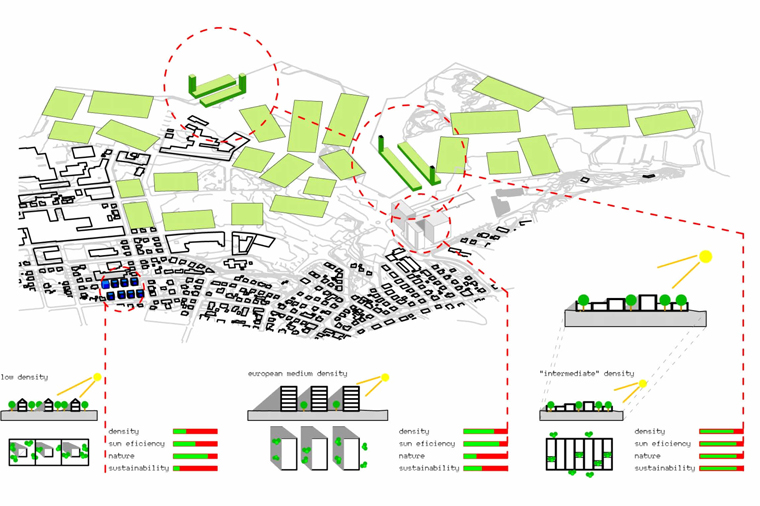 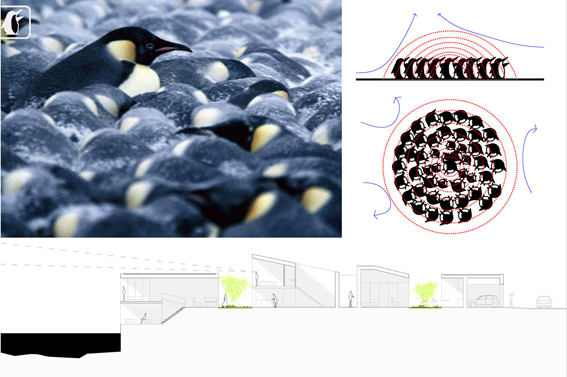 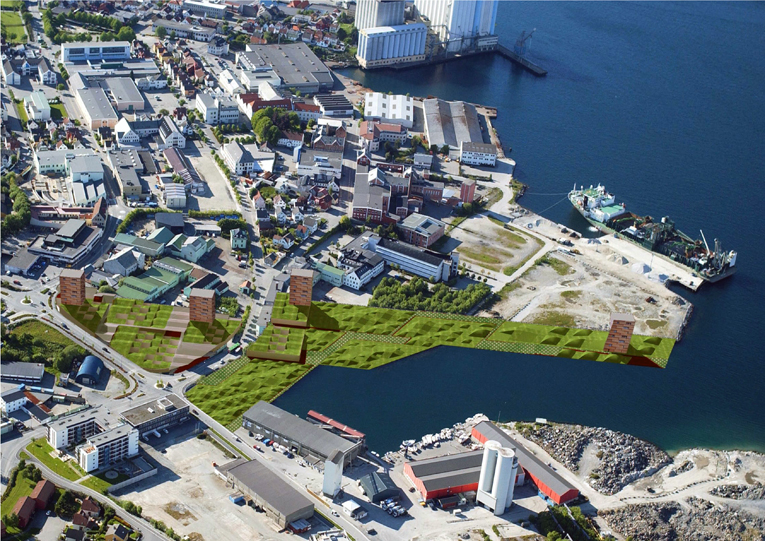 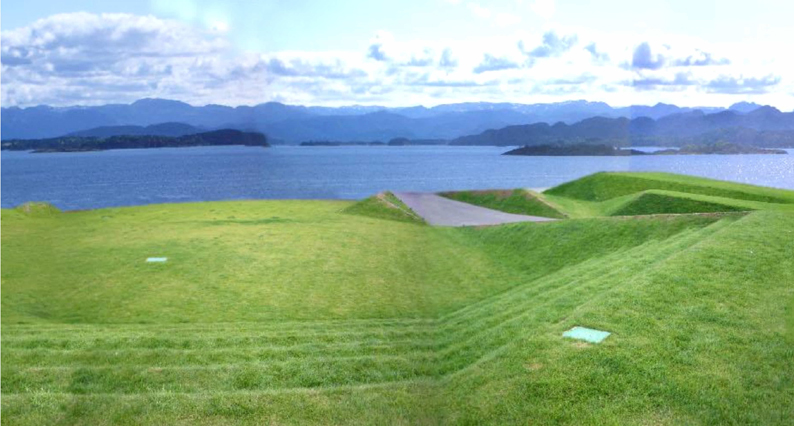 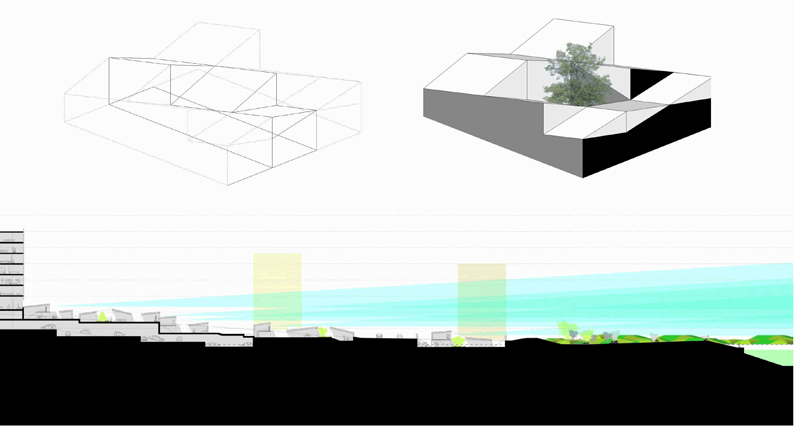 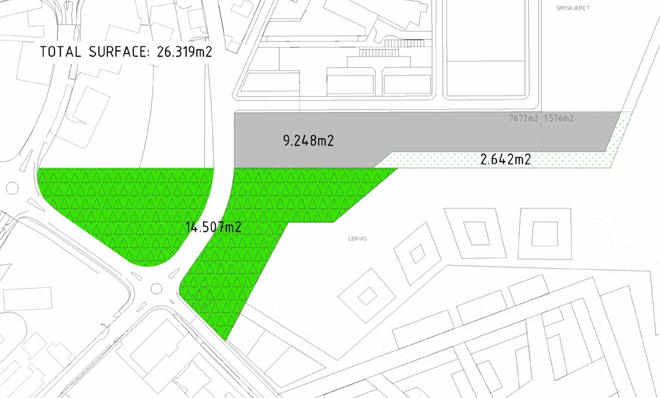 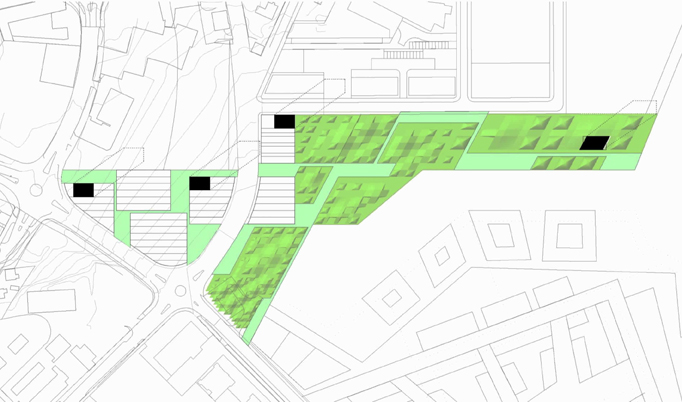 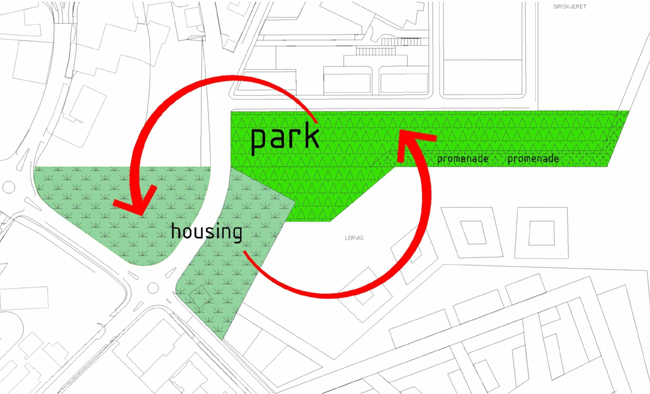 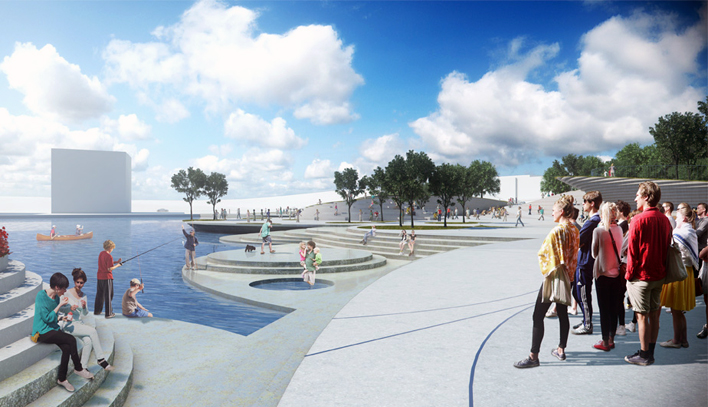 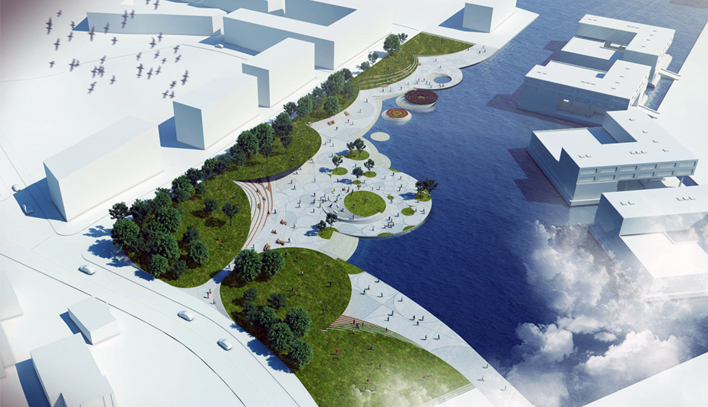 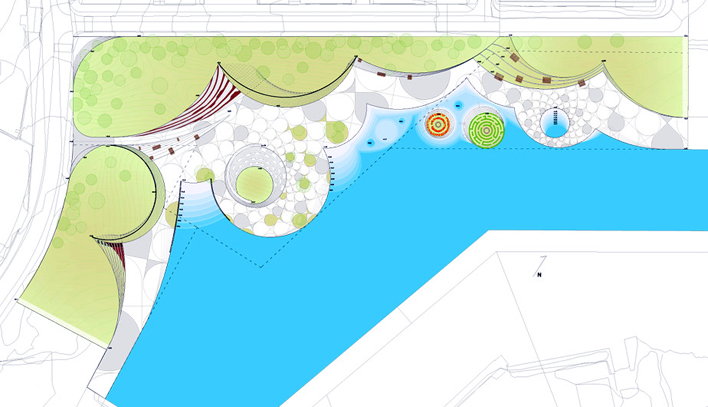