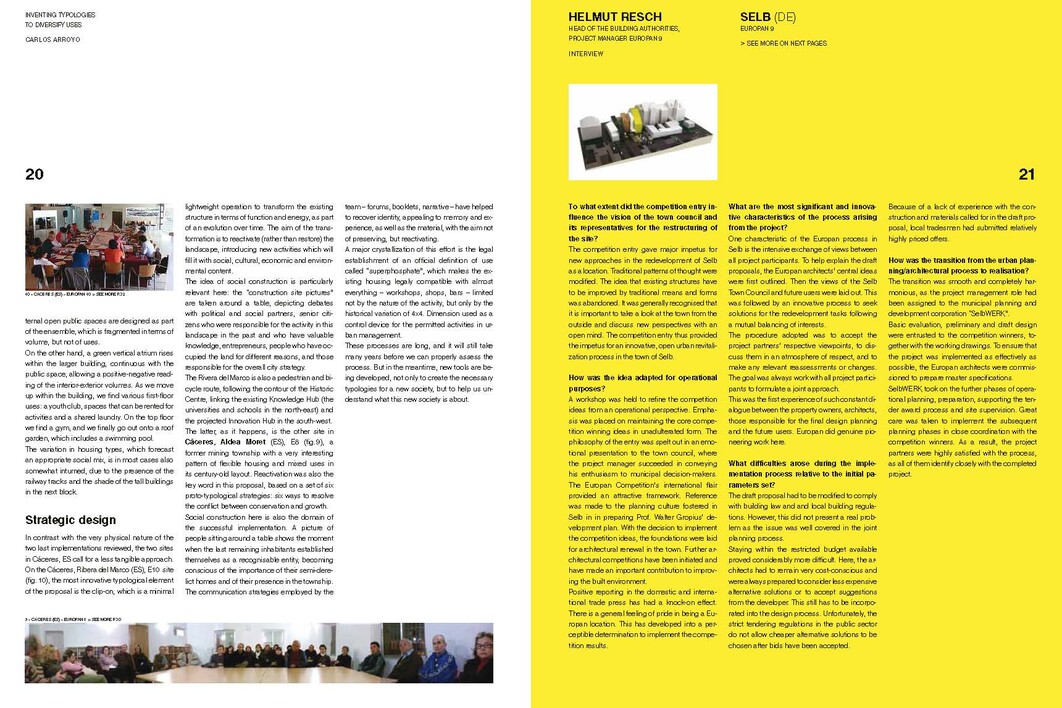 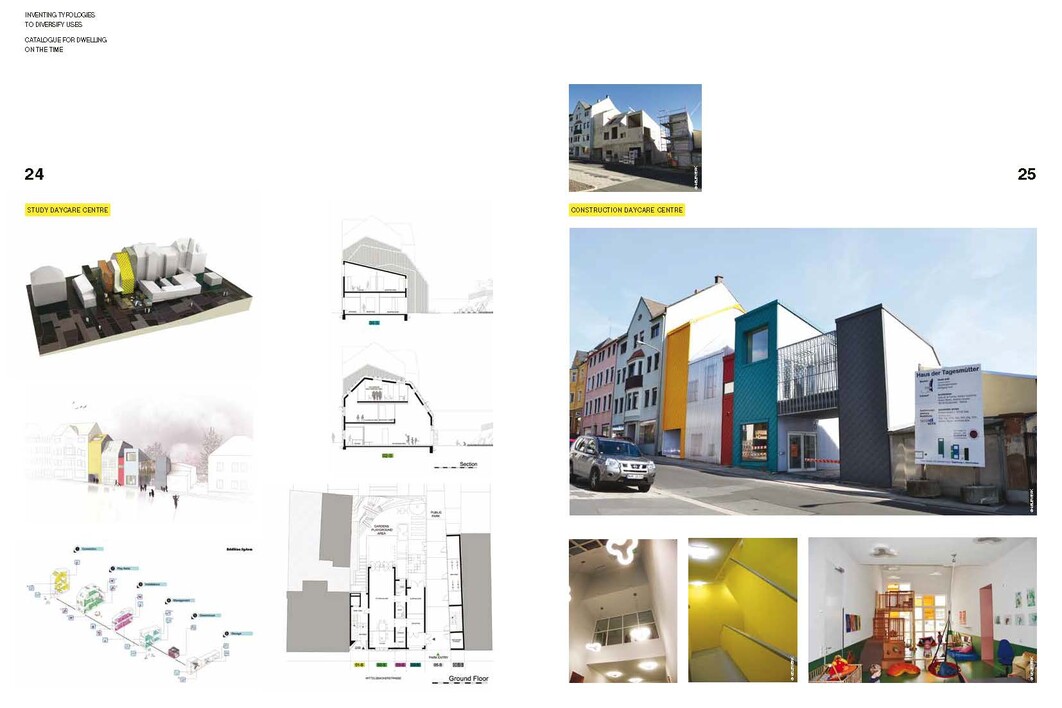 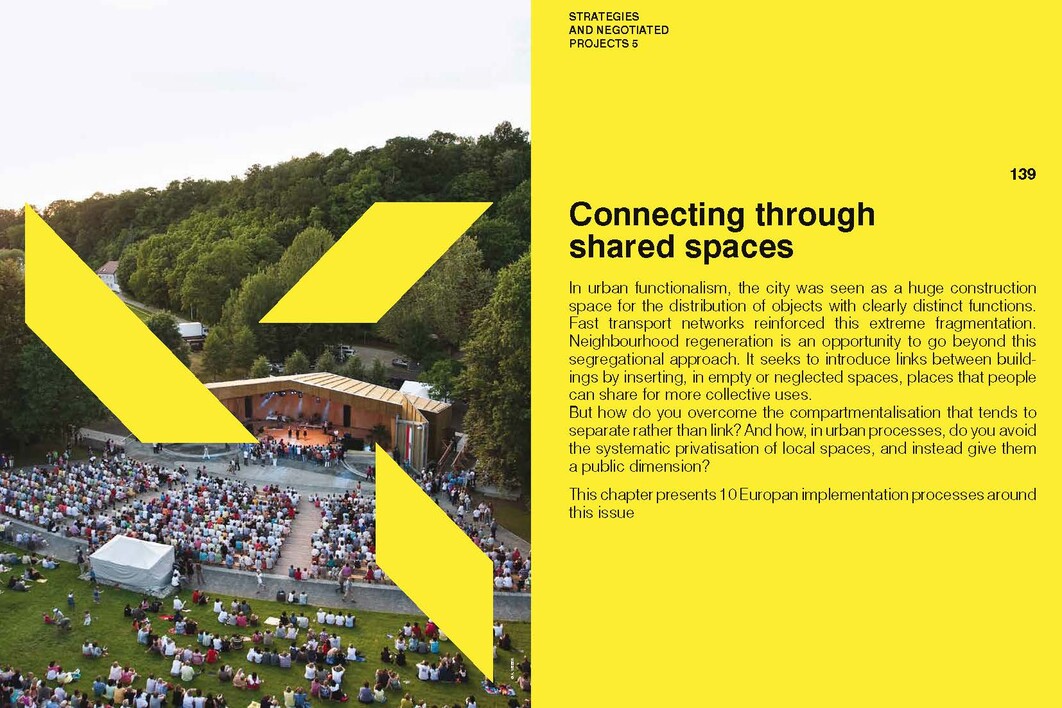 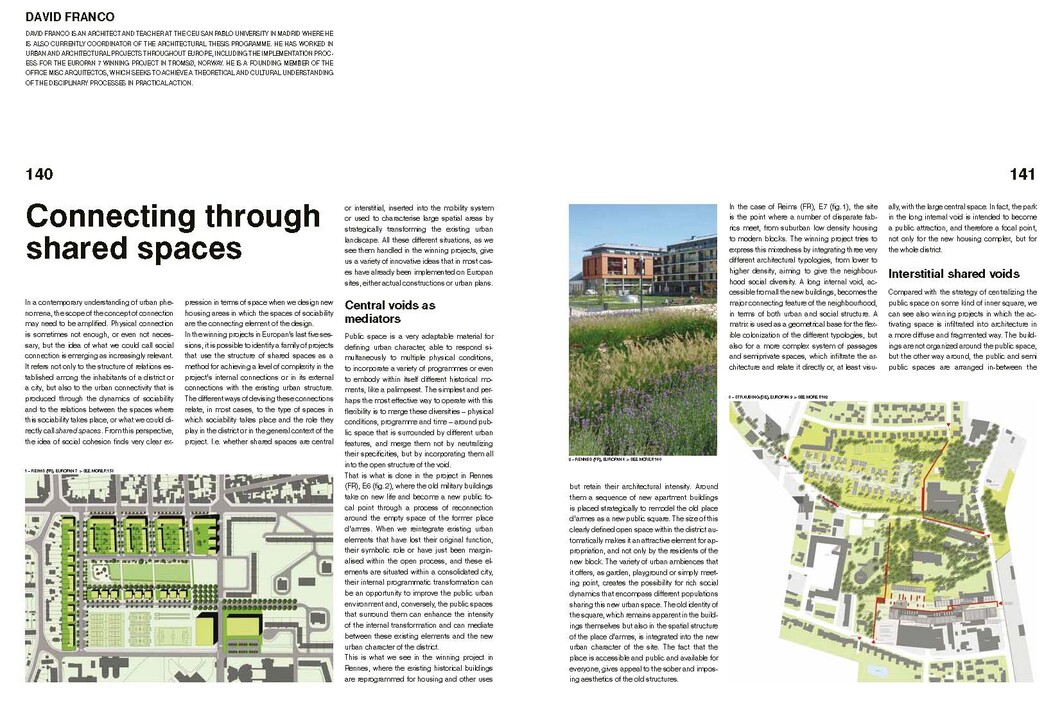 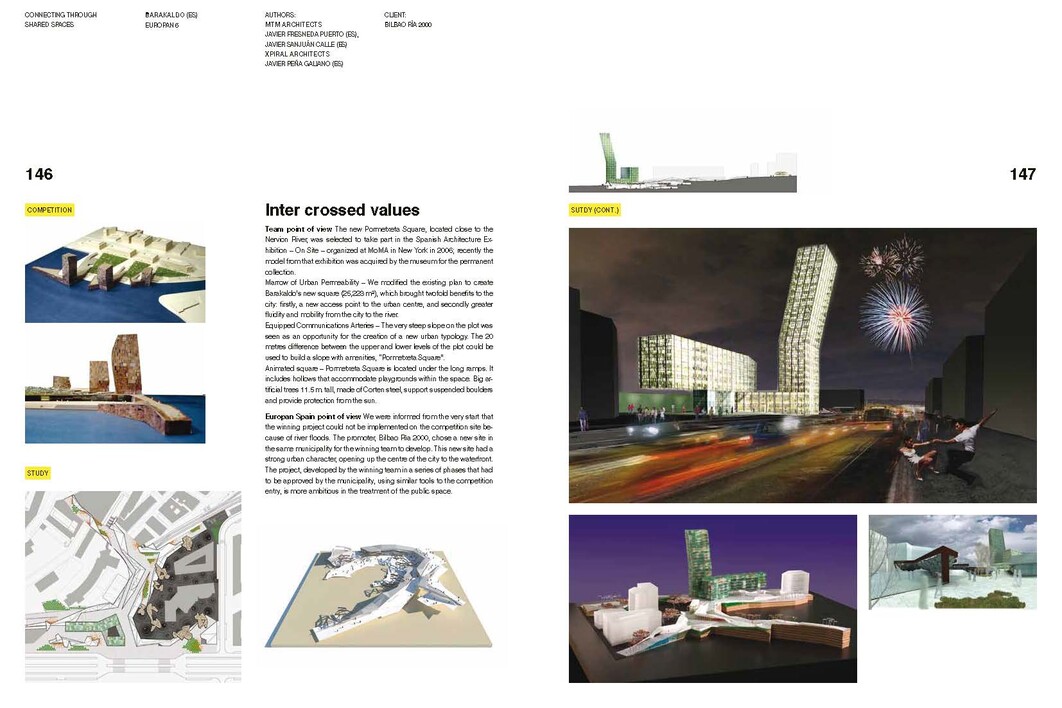 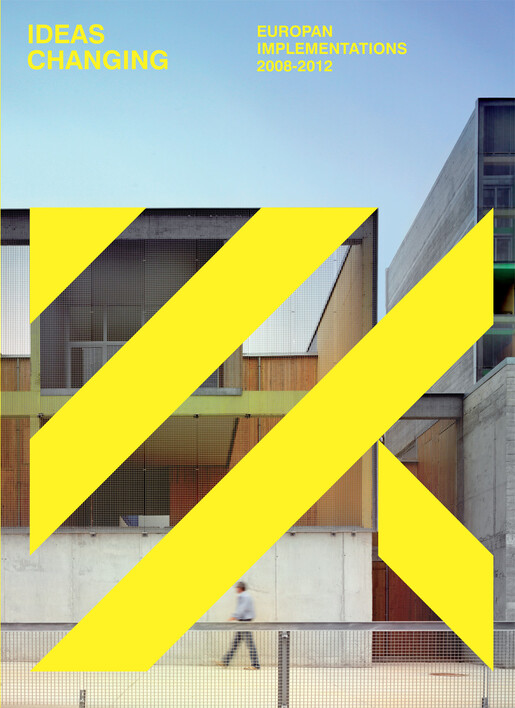 The book Ideas changing, Europan implementations 2008-2012 is published to coincide with the Closing Forum of the 11th session of Europan, at the same time as the European Results Catalogue. The celebration of the winning ideas in one session is a strategic moment to think about their future by looking at the implementation processes arising from previous competitions.

This book thus presents 60 active processes from the last two sessions between 2008 and 2012. It does not claim to be comprehensive, more to show a range of innovative processes at different stages in the long journey from idea to implementation in the context of real urban conditions.

In terms of presentation, whilst respecting diversity, it was decided to group them into six thematic categories each associated with a project issue and a process issue.

1- Inventing typologies to diversify uses: The 21st-century city will be a city of spaces with hybrid uses, reflecting the diversity of lifestyles and an urban intensification that a century of functional urbanism had denied. In the context of the urban project, this issue emerges at different scales: the neighbourhood that needs to provide fragments with different, interlinked uses, blocks where several functions need to be vertically integrated, and finally the individual building that has to encourage social life.
But how can this goal of overlapping uses be achieved to produce the right kinds of spaces?

2- Creating a porous urban connective tissue: Making the city by creating fluid itineraries that can accommodate different kinds of mobility is a priority in today’s urban projects. Architects seek to make the urban fabric porous. Buildings, while continuing to play their role in demarcating traditional public spaces (streets, squares, etc.), become permeable to cycleways and footpaths.
But how do you build these intermediate spaces and give them a public character, while protecting the private dimension and the security of the transit spaces?

3- Regenerating inhabited milieus: In the context of sustainable development, there is an overlap of territories (private and local, inside and outside, near and distant), natural environments and places, which link individual and collective history. How can the act of inhabiting, the focal point of societal and urban changes, coexist and connect with valuing natural resources, the focal point of an ecological approach to the city? How can this articulation/hybridisation form part of processes of coproduction (citizen, client, political authority, project manager)?

4- Reconciling density and privacy: Protecting natural resources and minimising the use of fossil energy requires a densification of existing urban fabrics. But when the majority of city dwellers dream of a house in the country, with urban services nearby, how do you design a dense habitat that nevertheless attracts people? Le Corbusier invented the typology of the “block villas” that was to reconcile the private house and the apartment building. Is this model still relevant and what models of dense housing can be devised to reconcile resource protection and citizen demand?

5- Connecting through shared spaces: In urban functionalism, the city was seen as a huge construction space for the distribution of objects with clearly distinct functions. Fast transport networks reinforced this extreme fragmentation. Neighbourhood regeneration is an opportunity to go beyond this segregational approach. It seeks to introduce links between buildings by inserting, in empty or neglected spaces, places that people can share for more collective uses.
But how do you overcome the, the compartmentalisation that tends to separate rather than link? And how, in urban processes, do you avoid the systematic privatisation of local spaces, and instead give them a public dimension?

6 - Making the city with flows: The history of mobility is also intimately linked with the history of the city, which is built from flows. The metropolis becomes a symbol of movement, flows represent the city, which in its turn becomes the terrain on which mobility is expressed.
However, modern urbanism has severed this link, preferring to subdivide roads into different speeds and the city into function-based zones.
Today, in the era of sustainable development, the priority is to re-establish links between different mobility networks and the urban fabric. How do you link the high-speed metropolis and the footpaths and cycleways of local neighbourhoods?

This presentation by broad themes highlights the importance in the processes of the strategy definition phase, where the competition ideas disrupt or energise the planning framework in a given context, by reinterpreting the environments they produce. Because of their force lines, but also because they are not fully formalised, once the actors commit to a negotiated project process, projects that are still only at the outline phase provide a vision of the future and widen the range of potential for future change. The ideas that emerge from the Europan competitions have undoubtedly become more credible with site representatives because they are projects of ideas designed by teams with a broad range of sensitivities and skills to help them tackle urban priorities.