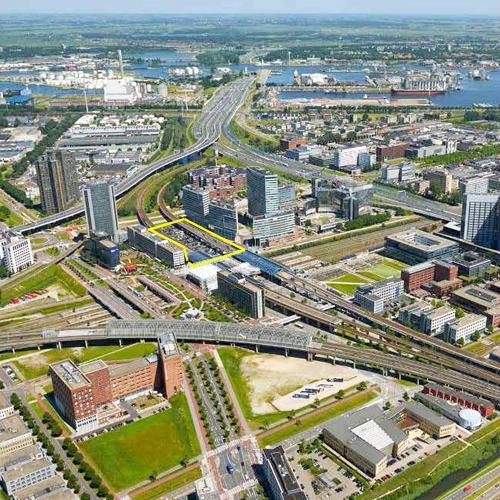 Site proposed by City of Amsterdam

Owner of the site Gemeente Amsterdam

How can the site contribute to the productive city?

Work-related functions characterise the area but the quality of buildings and in-between spaces are poor. After the economic crisis, the city successfully initiated a series of bottom-up regeneration strategies. Looking to the future, the site requires further transformation. The question is what to do and how to do it? For the municipality, this is an open question, but one in which the theme of productivity can be explored in the widest possible sense in search for, perhaps, radical solutions. The site is surrounded by productivity. How can this influence and help orchestrate a new vision for the area?

The long-term strategy is to transform Sloterdijk Centrum from a monofunctional business area into a vibrant, mixed-use urban quarter. Recently, redundant offices have been converted to hotels, student housing, short stay accommodation, retail and other amenities. These changes have been guided by some of the most flexible zoning policies in the Netherlands. Sloterdijk Centrum’s location mid-way between Schiphol international airport and the city centre helps to ensure that it will continue to be a dynamic area. There is no clear final image in sight but the large amount of infrastructure will remain a given.

Piarcoplein is currently a ‘park and ride’ area; it’s a place where cars are parked for long periods. For people who live in this region of Amsterdam, this is a convenient place to park their car and then travel by public transport either to the airport or to the city centre. Piarcoplein is the least attractive place in Sloterdijk Centrum. The site is both framed and trapped by streets, privatized open spaces and elevated train and metro tracks. The area currently lacks liveliness. The combination of cars on the ground and the bundles of roads, and regional and local transport infrastructure make the area feel like a non-place. And due to the lack of social control there is regular (minor) crime e.g. car burglary.

How is Production Considered in the Urban Diversity Program?

The city is seeking a vision to transform the site by defining an urban program for Piarcoplein that embraces productivity and mixed-use. Design proposals can range from propositions for new public spaces and/or new buildings. It is expected that the role of the car will change over time. Design proposals are therefore expected to integrate visions on the evolution of mobility and parking. On the project site it is important to consider the connections and public routes that pass through and around the site to and from Sloterdijk Station. By blending new forms of urban activities on Piarcoplein, the area could function as a district node as well as a gateway to Amsterdam’s Haven-stad where in the future, 40,000 new residential units will be realised.
At the scale of the study area, the task is to consider how recent and future developments can be integrated into the context in meaningful ways, both spatially and functionally. An innovative vision for the soft programming of the open areas is expected, focused on ideas to enhance productivity or to show-case the productive qualities of the surroundings. Proposals are expected to create meaningful connections between the three main squares around the station (Piarcoplein, Orlyplein and Carrascoplein) to improve the user experience for visitors and residents. 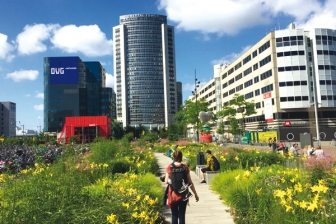 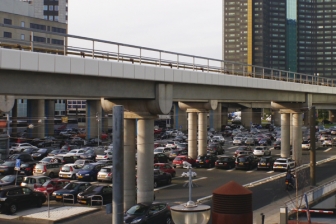 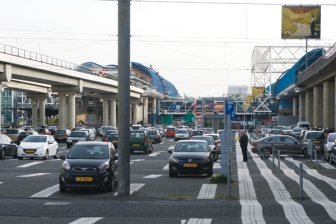 Looking towards the Sloterdijk station

Is it possible that you could add a map with some height levels of the site (especially of the raised infrastructure and the rest of the squares around) to the complete site folder?

Your question will be answered by the city of Amsterdam. The answer will be posted here before June 2.

Is it possible to have a section of the strategic site, or at least of the only project site?

More information is added in the complete site folder

Is it possible to propose partial demolition or reconfiguration of existing infrastructure or buildings?

We are open to proposals but the municipality can only decide for public areas.

Is it possible to have the altitude dimensions of the main levels of the area?

More information is added in the complete side folder

Is it possible to have some more detail on the station, such as the internal altimetric dimension?

Unfortunately, we don't have this information available.

Is it possible to move the parking lot completely or partially to an underground level?

Is there already an underground level for parking below the project area?

There is some limit regarding the maximum height for new buildings on the area?

Yes, Buildings can notbe higher then the eleveated tracks. we added some sections over the Piarcoplein regarding heigths of the existing railtracks.

Is it possible to reuse and integrate existing raised-railway as a sustaining structure for the new proposal as well?

Under conditions of required distances

Should it be respected any distance requirement from the raised rail?

yes, a distance of minimal 3,5 meters is required. Also consider the reservation for additional railtracks (Drawing with indication added to the complete site folder).

Is it possible to propose underground levels?

Yes, but please keep in mind constructions of the elevated railtracks.

1. Can you elaborate on the ‘’sponging effect’’ mentioned on the final page of the competition brief? How does it apply to the project site?

We are not sure to what your refer to and have not been able to find "sponing effect" in our brief. please contact us by email: info@europan.nl to resolve this issue.

Could we extend our proposal outside the boundaries of the project area into the strategic area?

Within the strategic area there are similar challenges in designing the public spaces. So yes expanding to other areas is possible, but with a strong focus on Piarcoplein.

Do you aspire to have more small business in the large office buildings adjacent to the Piarcoplein or do you want to keep that for big companies only. If so how do you want to facilitate that?

We are open to that and would be glad to facilitate this by changing the zoning plan, however private owners should be willing to cooperate

Is the area adjacent to Piarcoplein going to be densified?

so far there are no plans on that, however we could imagine expanding in this area in combination with a future growth of the station en expanding the railway-program.

Why is the Orlyplein seen as an example of urban revitalization and a model project for urban renewal as stated in the project brief?

It's not a common solution for entrances of trainstations in main cities to change this into a green zone, the Orlyplein containts more then 50.000 plants and flowers and contributes to the ecological system and has become a pleasant place to stay now, we would like to add more of these areas in Sloterdijk.

In the brief you mentioned the many, many cyclist. Do you imagine that they should have a place on Piarcoplein? And would you image that instead of the bicycle storage next to the Carascoplein?

Yes, we could imagine this, but we also think the total amount of places for bicyclestorage should be spread over the area, so also we need storage around other areas around the station. In this way less cyclist need to cross the station area.

What were the goals/aims of the municipality for the Piarcoplein versus the Orlyplein and the Carascoplein?

The Piarcoplein is a hub for parking & car-transportation, while Orlyplein was originally meant for bus-transportation, which has transformed now into a green zone; Carascoplein was a kind of left over area designed as a public space now, but could be questioned

Where does the name 'Piarcoplein' come from?

Do you have an idea of a possible function that could be added that would be of added value for Piarcoplein?

Why do you think that mixed use is the most capable of adapting to changing trends?

What role does the municipality take: facilitating or pro active?

Facilitating towards private, existing buildings; pro active towards public spaces and grounds which are to be offered by the municipality to the market

Does the municipality themselves want to exploit the front-end places for small local businesses?

Will the facades of the buildings adjacent to the Piarcoplein have a more open character?

The municipality tries to stimulate the private owners of those buildings to open up the facade, the outcome of Europan might be a way to seduce them.

How many cars pass by on a daily basis and how many parking spots are there?

About 2500 cars pass by on daily basis pass by (in &out) on Piarcoplein, there are about 450 parking spots

How many people travel to sloterdijk station on a daily basis by train?

How many bikes are there stationed?

From Functionalist Infrastructures to Productive City
How Can New Mobility Conditions Encourage Hybridization Between City & Production?


How Can New Mobility Conditions Encourage Hybridization Between City & Production?

Infrastructures are crucial actors to introduce a dynamic economy in the city. But they have most often been introduced against the city itself – motorways, parking lots, intermodal areas act as gaps and reinforce urban fragmentation.
New city visions on a soft mobility model offer new opportunities to reconsider those infrastructures for adaptation. But how can we make sure this leads to a more sustainable urban life and the hybridisation of programs including productive activities? How to reinforce infrastructures as a fertile ground for a productive city? Could downgraded roads become productive streets? Could obsolete parking areas turn into productive places? Could updated intermodal nodes generate productive hubs? And which space strategies could arise from these scenarios?