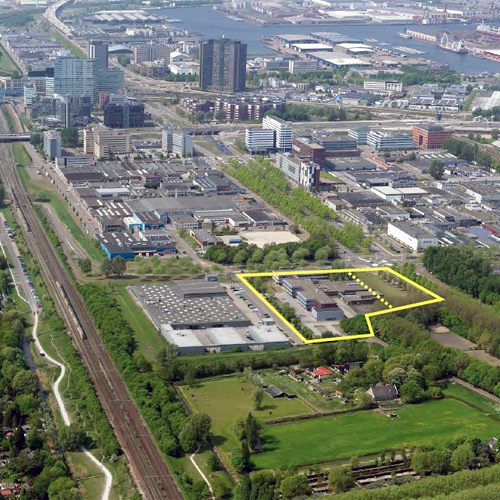 Site proposed by City of Amsterdam

Owner of the site Gemeente Amsterdam

How can the site contribute to the productive city?

The municipality is seeking an inspiring architectural vision that can bring together the aspirations of the municipality, who intend to promote the creation of a new mixed-use neighbourhood, and the desires of the stakeholder, who intend to expand their building and in doing so, support increased multifunctional uses on the site. Design proposals for the public space should increase the attractiveness of the location, help foster synergies between education and entrepreneurship, and make visible the changes taking place in the area.

The site is located in Sloterdijk 1 development plan, an area in the eastern part of Amsterdam’s Port-City where in the long term, 40,000 homes will be built by 2040. The municipality wants to transform and convert this area into a coherent mixed-use urban district. Initially, the municipality is focusing on the area between Transformatorweg and railway tracks which will, over time, become a mix of living, working, educational and commercial facilities. The municipality wants to develop the area together with the existing owners and users. The first steps in this collaboration process has just started. 4,500 new homes will be realised in Sloterdijk 1 by 2025.

The location Transformatorweg is part of one of the (five) blocks of the planning area Sloterdijk I South. Despite the various port-related activities, the area has a mono-functional character with a strong emphasis on the car. There are very few examples of intensive urban development. The study area is bordered by rail tracks and private allotments in the south, undefined green space to the east. But change is coming. The highway to the north will be re-profiled and light-industrial buildings in the west will be replaced by mixed-use residential neighbourhood. As it stands, the area feels like a ‘non-place’. This is the fundamental challenge set by the competition.

How is Production Considered in the Urban Diversity Program?

On the project site, the ambition of the city is that new residential and non-residential programme can be integrated with the Mediacollege building to create a mixed-use cluster. During the process of transformation, it is important that the Mediacollege can continue to function, so the phasing of new additions and various development scenarios should be indicated clearly, and supported with strong arguments. It is important to understand both the benefits and constraints associated with combining and/or placing in close proximity the different uses. What could be the role of shared common spaces and how, for example, could educational facilities be used outside school hours for other forms of social or commercial activities?
On the study area It is expected that design proposals include an analysis of how the site can function better as a gateway for Sloterdijk 1. The study area is bordered by different conditions to the north, south, east and west and each border condition presents both challenges and opportunities. To the north, the city is busy with a new framework plan that will narrow the profile of Transformatorweg, releasing land for a new canal and more green, open spaces. To the west, the municipality intends to reduce the number of cars on Contactweg and make it more pedestrian-friendly. How might this space, and the future buildings that will face it, support the integration of the Transformatorweg in its surroundings? To the east, there are opportunities to connect to Amsterdam’s famous Westerpark.

Contactweg, Mediacollage on the left

Working versions of the files have been placed on the same location.

NL-Amsterdam-SS-M1.dwg does not open (it also shows 0KB when downloaded). Please upload the file again.

When was the MediaCollege building built?

The Mediacollege was originally built in 1980. New extensions have been realized as late as 2016.

The programm should be 75% housing, 20%productive work spaces and 5% commercial.

Should the top of the submission panels state "Amsterdam" or "Amsterdam Transformatorweg" ? The Guidelines says to mark the City, but there are 5 Amsterdam locations.

The panel should state "Amsterdam Transformatorweg".

The file NL-Amsterdam-SS-M1 is not readable (in fact it weight 0 kb). Could you please load it again? The project site boundaries between the Google Earth and the brief seem quite different. Could you please provide a vectorial file with a clear definition of the property lines? Thanks

A working version of the file has been uploaded to the same location. The projects site as given in the brief should be followed.

Could you attach dwg file with border of the site. Now there are two pdf files in the complete site folder with two different optiions of the border?

The site lines from the brief should be followed

And productive again!
How to Reintroduce the Productive Economy into New Urban Districts?


How to Reintroduce the Productive Economy into New Urban Districts?

Many formerly industrial places in and around cities are now out of use. Buildings were left in a derelict state, activities have been moved or stopped, sites became brownfields. Obsolescence is the common feature of these sites and the future is uncertain. Mostly, we dream of turning them into new vibrant urban quarters. But to avoid total gentrification as it has appeared many urban renewal projects in the past, we should perhaps try to put some productive activity in these sites… again? Because these sites were once industrial and linked to the city. Because there is a will for a really mixed city, and that mix includes productive economy as well.