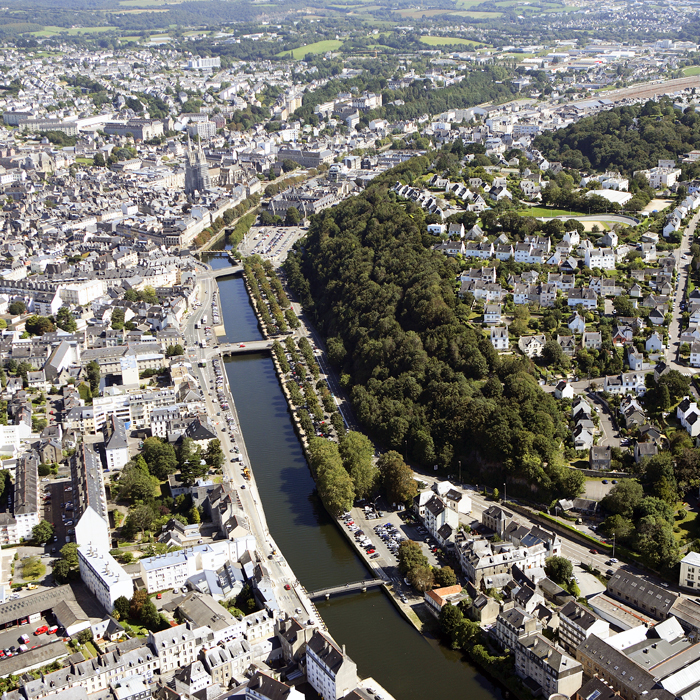 Commission after competition mission of pre-operational studies. Operational implementations could be proposed depending on the results of the competition

Quimper is the final stage on the route that links Finistère with the rest of Brittany.The city grew up at the point where the tide releases into the River Odet. It is also at a convergence of valleys, permitting easy communication routes in this uneven landscape.
The city possesses an exceptional heritage, linked with its history and more particularly with that of its ancient nucleus with its relations to the waterways and their valleys.
Founded at the confluence of the Steïr and Odet rivers, the city of Quimper possesses an unusual and contrasting geography. The winding valleys provide this large territory with a variety of vistas over the landscapes and constitute landmark points of connection between city and nature. They also, like the relief of the landscape, raise the question of the urban boundaries.

The project area is one of the main gateways into Quimper, marking the boundary between the outskirts and the city proper. It also marks the transition between natural spaces (Odet estuary) and the centre. It therefore occupies a key position as a connector within the city, and it is this strategic positioning that is behind the effort of transformation. It therefore raises a first question: how to create a transition between the maritime, estuarian and urban landscapes?
At a more local scale, it operates as a pivot, since it has the potential to connect and reinforce urban and landscape links between:
- The River Odet and Mont Frugy, which are kept apart by the thick fabric of the Locmaria district, the footprint of Departmental Road 34 and the sharp slope of the hill.
The project proposals will need to redesign the stitching between these defining elements with the aim of creating a continuum of nature in the city extending all the way to north Quimper.
- The plateau with its primarily detached housing and the River Odet. Here again, the urban structure, the topography and the street network have created successive barriers in the landscape.
At perimeter scale, the site is distinctive in being made up of three distinct and singular urban entities: The disctrict of Locmaria; l’îlot Rozmaria; and Locmaria planted pathways.
Today, they stand side-by-side but without any real dialogue, and function in an introverted manner despite their potential to create large-scale dynamic connections. They protect themselves from the Departmental Road, since the broad wake of this highway and the speed of the vehicles leaves little room for crossings and links. The challenge is therefore to identify and enhance future relations between them in such a way that they create instruments of reconnection with the wider landscape.
Because of this connective potential, therefore, the site constitutes a strategic tool for the transformation of the zone.

The site is fully congruent with the theme of “Living Cities”, since it is the point of convergence of two defining dynamics: the arc of nature that connects with the estuary, the River Odet and Mont Frugy, and the dynamic of Quimper’s urban development. Because of its position, between the city and the wider landscape, it is the ideal focus for ideas about the role of nature in the city.
It resonates equally well with the theme of the last sessions, “Productive Cities”, since it relates to recently abandoned former production sites and the Locmaria district, cradle of the Breton pottery industry for several centuries, which recently embarked on a reorganisation based around its heritage and local skills.

What are the DIR's data and forecasts for traffic on the D34?

We do not have any data on the evolution of the traffic.

Complement on roadway: two documents on road counts are available for download in the 0-New_Docs_After_Launch file of the compete site folder:

Is it possible to specify the project of bypassing the city center planned by the city of Quimper? What is the outline of the route of this bypass?

There is no bypass project planned by the City of Quimper, other than the one already completed to the north of the city.

Roads complements: However, the Department should consider the eastern sector of the city (Boulevard Allende, Route de Brest, etc.)

What are the data on the navigability and the river traffic of the Odet? Which parts of the Odet are under the jurisdiction of Voies Navigables de France? What constraints apply to the development of its quays? Is it possible to propose new crossings on the Odet (footbridges for soft mobility and/or carriageways)?

The candidates are free to propose new crossings on the Odet if they consider it relevant.

Is there a project for the evolution of the D784?

There are currently no plans for the evolution of the road. The europan proposals will feed the future reflections.

The Mont Frugy is a classified site: - What are the limitations in terms of intervention on this site? Is it possible to think of new paths, accesses, walk on the side, troglodyte interventions, punctual clearing, punctual constructions?

An intervention in the perimeter of Mount Frugy is possible within the limits of the regulatory framework of the SPR. If an evolution of the PLU is proposed, it must be clearly indicated.

The project must respect the following principles: respect for the site, its quality, its specificities and be in keeping with the history of the site and the spirit of the place. The landscape character of the site must however be rigorously preserved.

The attention of the candidates is also drawn to the "fragility" of the mountain which is currently being reinforced.

The 1910 Manor and its garden are a registered site: Is it possible to remodel the garden (topography, planting plans, flooring...)?

If you feel that the remodeling of the Manor's garden is relevant, you must respect the SPR (Site Patrimonial Remarquable) regulations and the following principles: respect for the site, its quality, its specificities and be in keeping with the history of the site and the spirit of the place.

The SPR (Site Patrimonial Remarquable, formerly AVAP Aire de mise en Valeur de l'Architecture et du Patrimoine) of the city of Quimper defines the framework of intervention on the buildings; according to a categorization of the architectural interest of the listed buildings. Please refer to the regulatory document and the related graphic documents.

PERIMETERS: Is it possible to expand the project perimeter (yellow) to include the parking lot of the Place Résistance and General de Gaulle to the northeast? To what extent can the study site be extended to the upper edge of Mount Frugy, including the interface with the residential fabric?

The project perimeter (project site) can be enlarged to include the parking lot of the Place de la Résistance et du Général de Gaulle.It should be noted that it will be part of the reflection on the development of the Odet quays in the city center (p.21 of the site file/site brief) that the city wishes to undertake in the near future.

The extension of the reflection perimeter to the edge of the mont Frugy, in contact with the residential fabric, is possible.

What is the geological nature of the site?

We do not have more detailed data than the information available in open data (geoportal, etc...).

Can we have the PPRI?

We invite the candidates to differentiate in their proposals what fits into the current regulatory framework and what would require changes.

What are the possibilities of mutability of the land between the traffic circle and Locmaria? What are the current uses of the area?

The plots of land located between the traffic circle and Locmaria are mostly privately owned and are mainly used for residential housing.

Does the Mount Frugy protection perimeter include a non aedificandi easement? If so, would this also apply to aediculae or light structures?

Refer to the SPR, formerly AVAP.

Is the departmental road 34, more precisely the Rozmaria-Locmaria-Mont Frugy section, already decommissioned or in the process of being decommissioned? Thank you very much

The structural roads included in the yellow and red perimeters of the site (see above error in the naming of the roads in the site brief) are not currently the subject of a declassification. The road of 19 March 1962, the high street and the Locmaria alleys are expected to remain one of the structural entrances to the city of Quimper, but to be redeveloped to be less of a road, to reduce the speed of vehicles, and to allow the development of soft mobility. 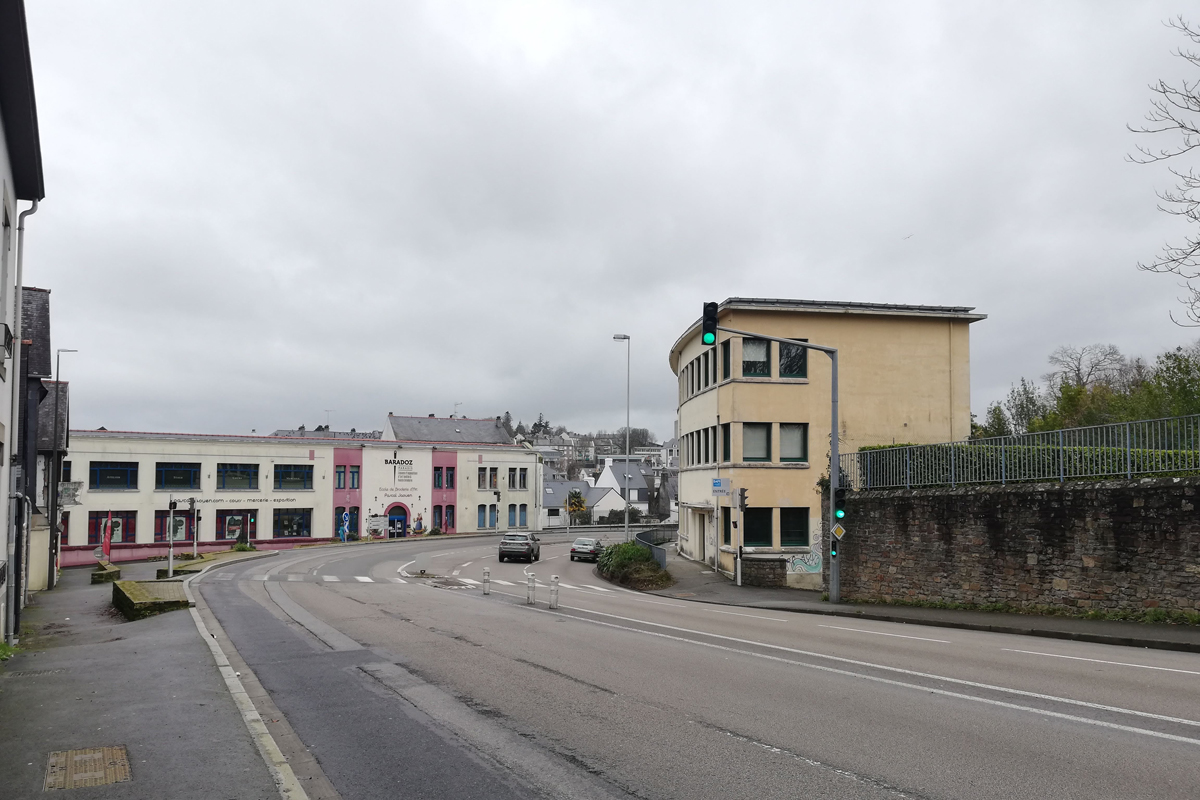 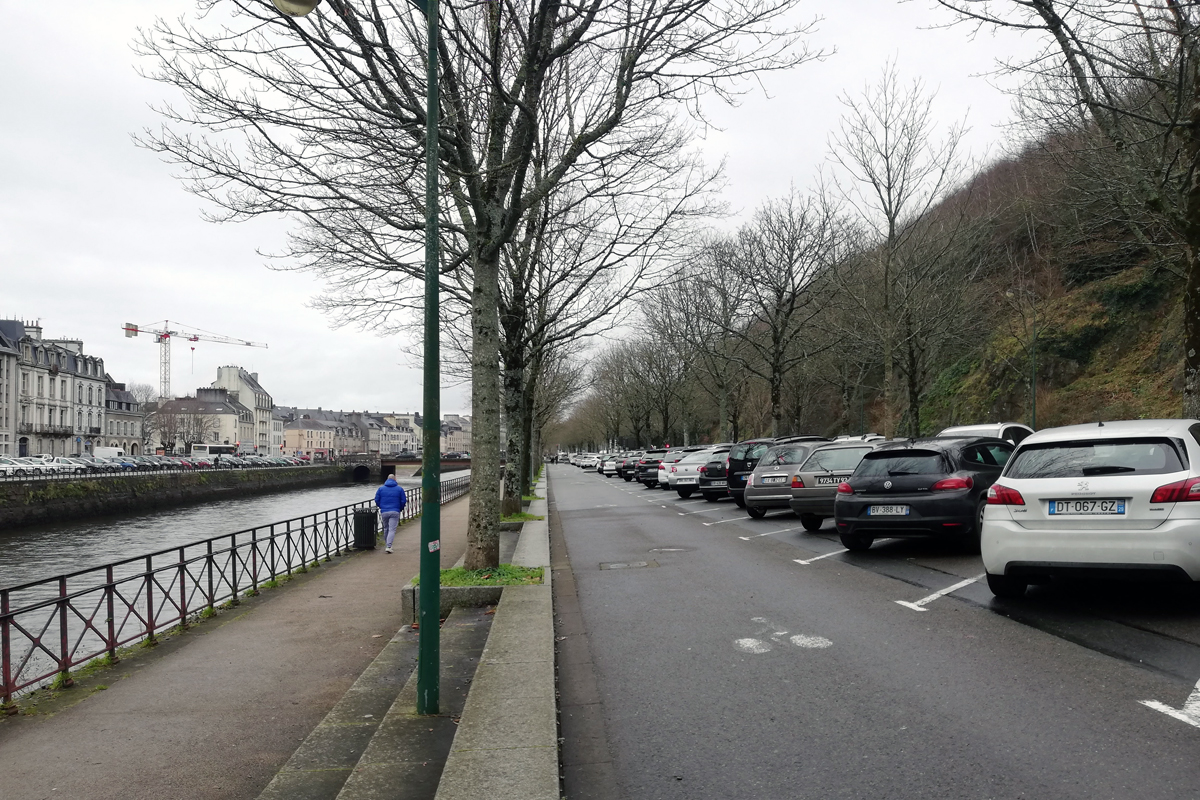