This article introduces the results of the 5th edition of DOCEXDOCE around the theme of New uses and adaptations to climate change.

What future for the old Barcelona power station ?

Europan supported the 5th edition of the European version of the competition for students DOCEXDOCE.

The rule is that the students must produce a project in 12 hours on a topic and a site defined by the organization founded and managed by Nicolás Martínez Rueda, architect Barcelona (ES). This 2022 edition of DOCEXDOCE has as theme “Rising Resilience” and the site proposed was located in Sant Adrià de Besòs, a small municipality a mere 8 km North of Barcelona city centre within the province of Catalonia, Spain, situated on both sides of the Besòs estuary, At the beginning of the 20th Century, a new wave of industrialization transformed the landscape of Sant Adrià from farmland to factory. Today, the large polluting factories have closed. Regeneration is necessary for Sant Adrià to prosper once again, and the city’s most prominent site has been chosen as a catalyst. The three skyward soaring chimneys and adjacent turbine hall preserved from the 1970’s Sant Adrià thermal power plant are an integral piece of the district’s cultural context. Looking over the city they are an architectural remnant of its past and an icon that could be central to its future.

The competition took place on October 9 th , 2022. 1264 students, organized in 437 teams from 25 countries, participated in the event either independently online or as part of one of the 14 onsite embassies (related to European Schools of architecture) in Rome (Italy), Sofia (Bulgaria), Granada (Spain), Barcelona (Spain), Ankara (Turkey), Skopje (Macedonia), Sarajevo (Bosnia and Herzegovina), Tirana (Albania), Bucharest (Romania), Belgrade (Serbia), Zagreb (Croatia) and Msida (Malta). There was also the cooperation of venues located in Vilnius (Lithuania) and Liberec (Czech Republic).

The jury was composed of - Miriam García García | Ph.D in architecture, landscape architect, LANDLAB - Barcelona (ES) - Bernd Vlay | architect, StudioVlayStreeruwitz, teacher - Wien (AT) - Tomás García Píriz | Ph.D in architecture, architect, CUAC Arquitectura Camp; Tomás García Píriz Arquitectura - Granada (ES) - Céline Bodart | Ph.D in architecture, architect, professor – Paris (FR) - Didier Rebois | architect, urbanist, professor, General Secretary of Europan Europe - Paris (FR). The jury remarked the quality and depth of projects that came from a twelve-hour period of work. They agreed that this was an extremely complex site that posed many questions and had a range of topics to tackle : Heritage and Memory, New uses, Regeneration of the territory...
They decided to read the projects as ‘initial ideas’ and ‘intentional concepts’ rather than fully formed designs as the time restraint forced certain aspects of projects to be unresolved. The variety of programs was noted as well as the impressive standard of graphics. While different projects explored different themes, those that stood out the most dealt with multiple. Projects were praised when the complexity of the site was met with a complex and laired solution.
The jury gave 3 Prizes and 8 Honorable Mentions.

This project project addresses the real scenario of sea level rise by creating an adaptive, productive landscape suitable for the region and situation. Using algae and working with the subsoil to produce energy, and food, generate a marine ecosystem and increase the delta’s biodiversity, this solution seems simple, yet it is considered very clever. While the vision they create is attractive and somewhat utopic, it also feels simultaneously attainable. Poetically between the soil and sky, the existing buildings introduce human activity through social housing and public spaces. The chimneys are stated to clean the polluted air, and though this process is not fully explained, the basic understanding is strong. The main image is captivating and provokes many different thoughts, ideas and questions. It is both suggestive and attractive. This project was a forerunner from the beginning as the authors seem to understand the situation and site complexity.

An ecological and educational approach: agriculture and industry merge into productivity, preserving the historical antagonism between the project’s local and non-local impact. The program of the productive environment hosts locals and attracts “punctual visitors”. The activation of local resources, environmental awareness, and ecological smartness create a metabolic neighbourhood of things and elements. Considering the comprehensive reflection about the interrelation processes, the project still is emprisoned slightly by a classic zoning attitude: the design configures a collection of entities whose identity could have been more “hybridized” by processes of exchange among them. However, the placement of the zones was carefully considered; for example, the agricultural area is located away from the sea, where the land is higher, and there is less saltwater infiltration. In general, the project is well-balanced and an example of how to strategically manage a landscape by working with the site’s resources in a mature way. The jury members appreciated the projects positioning within the context of the city and agreed that while there isn’t an immersive visualisation, the project is intentionally and carefully complex.

The simple formation of a dyke is beautifully seen in section. One landform running through the three sculptural chimneys suddenly puts the concrete structures in a space between land and water. This project responds to the question with ‘one simple and clear idea’. The city is protected from flooding, and the dyke is so strong that it naturally creates an unintentional landscape as a byproduct. It posses as such a captivating place where community gather, nature is welcomed and the two worlds harmoniously combine.It is a project of the future; however, it will be an attractive place in 100 years, but there is little consideration towards the process.

8 others teams of students received an honorable mentions:
1- EEEnergy cycle! Alberto Camarero Matas, Sergio Pírez Porras (Granada, Spain) Three energies create a place of networked added values: natural forces and spatial power initiate a creative working environment into the site-specific history and technological innovation to the public.
2- The Veil Antiola Kapaj, Arkeida Merxhushi, Kejsi Çomo (Tirana, Albania) Several interesting solutions to develop the site: .A walkway - A leisure theme park, The seaside development. The Veil does it poetically and lightly, contrasting the weight of the existing structure.
3- Shift The Profit Franziska Vey, Anna Abl, Anna Edelhofer (Graz, Austria) The project incorporates a process of evolution over time, believing that the new industrial landscape will grow and transform by reacting to the environment over time.

4- Intersection of Nature and Machine Alba Marcela Britez, Simon Johan Muller (Milano, Italy) The factory becomes a huge horticultural vessel with a public canteen, the turbine hall becomes a farmers market, and the landscape a site-specific ecosystem.
5- Territorial Monument Álvaro Rossy, Jaume Mayos, Lluc Ruiz (Barcelona, Spain) The project proposes a program for the active regeneration of the environment and building. In addition to the simple but effective proposal for landscape recovery based on introducing a Mediterranean forest.
6- The Last Factory Greta Grbavac , Antonio Brkić, Luka Jugovac, Klara Gazda (Zagreb, Croatia) The project incorporates a metabolic and infrastructural vision that is exciting. The landscape is both wild and productive..

7- The Path Of Life Aysha Isaki, Dogan Chorba, Marija Arizankovska (Skopje, Macedonia) This project attributes a symbolic history to the building, which it interprets as a force that has resisted everything, including war, and as a symbol of human life and resistance.
8- Mare Nostrum Laboratory Beatriz Salido Fortuna, Lucía Santos Buceta, Víctor Blanco García, Víctor Jorgensen Mínguez (Sevilla, Spain) It is interesting to put the Mediterranean Sea at the project’s core. The global issue of rising sea levels is situated and anchored with common landscape features. 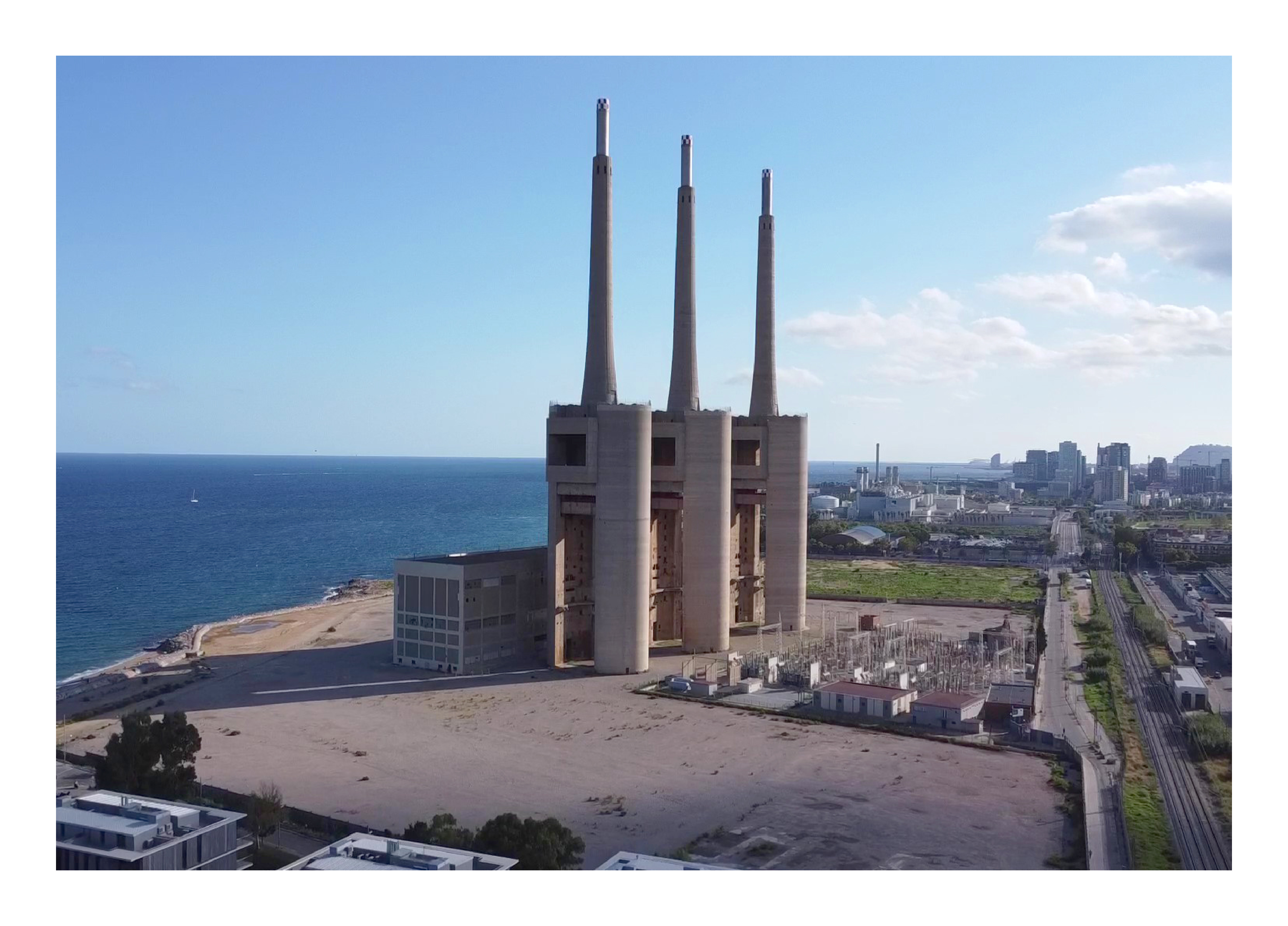 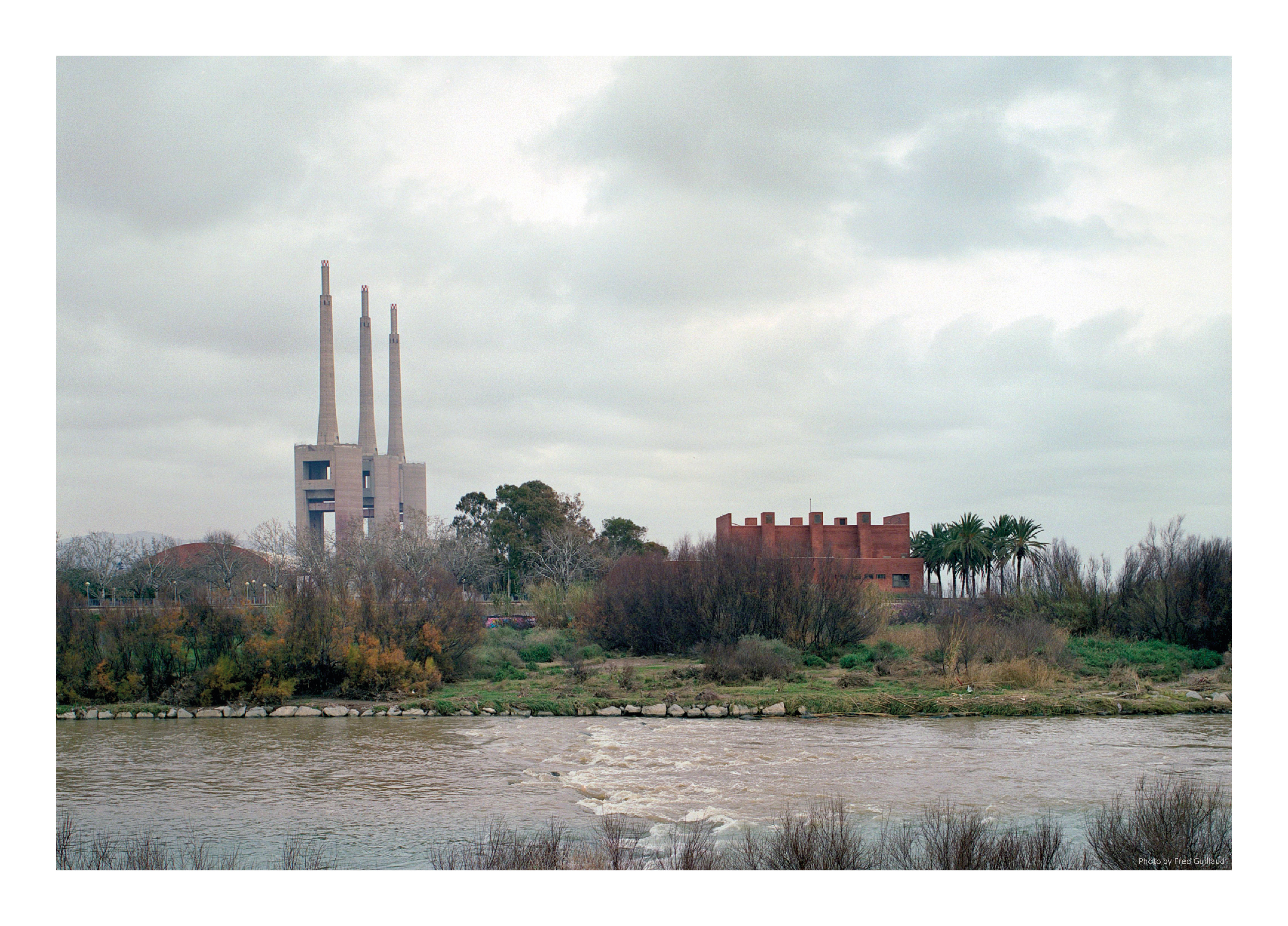 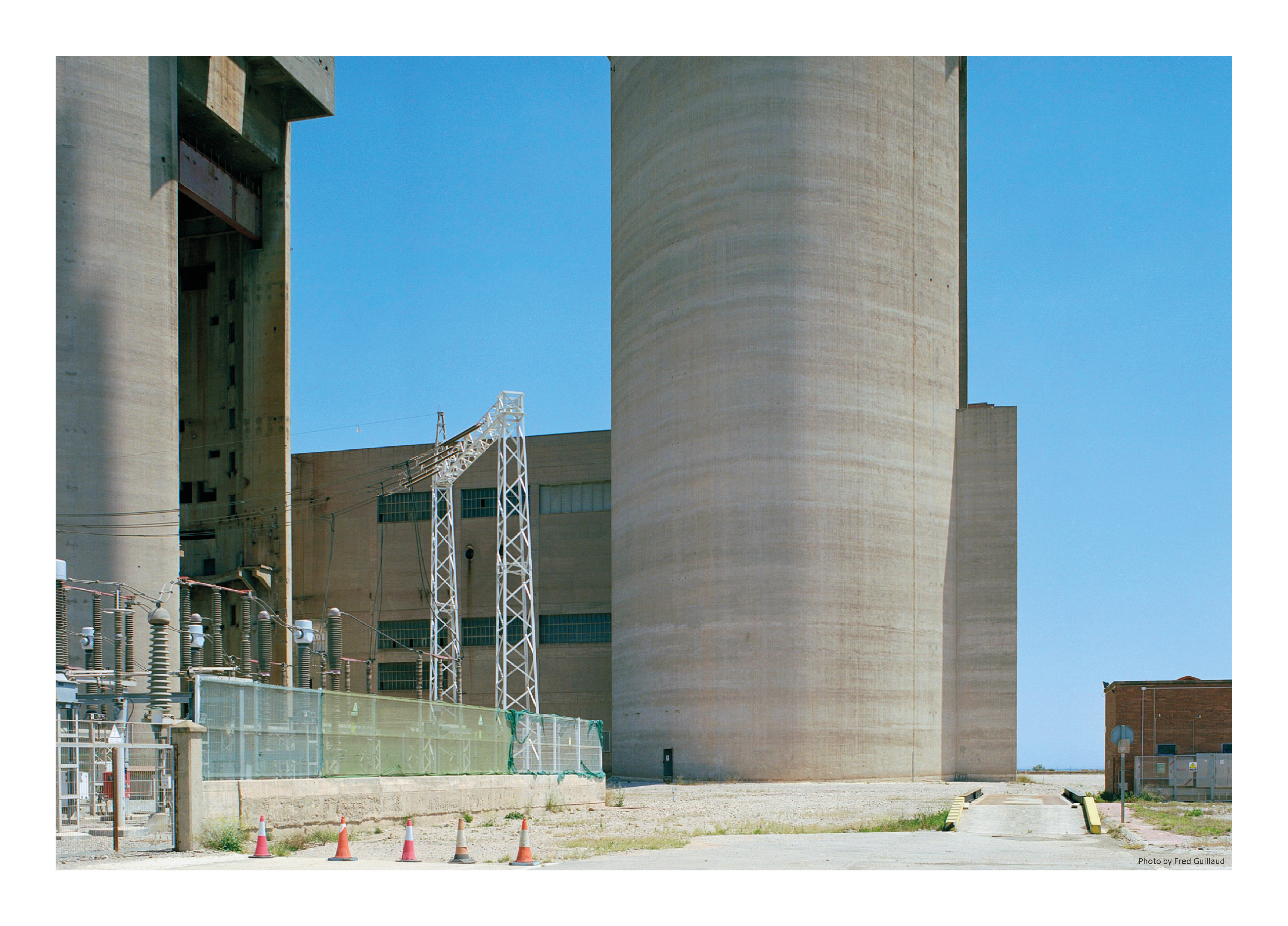 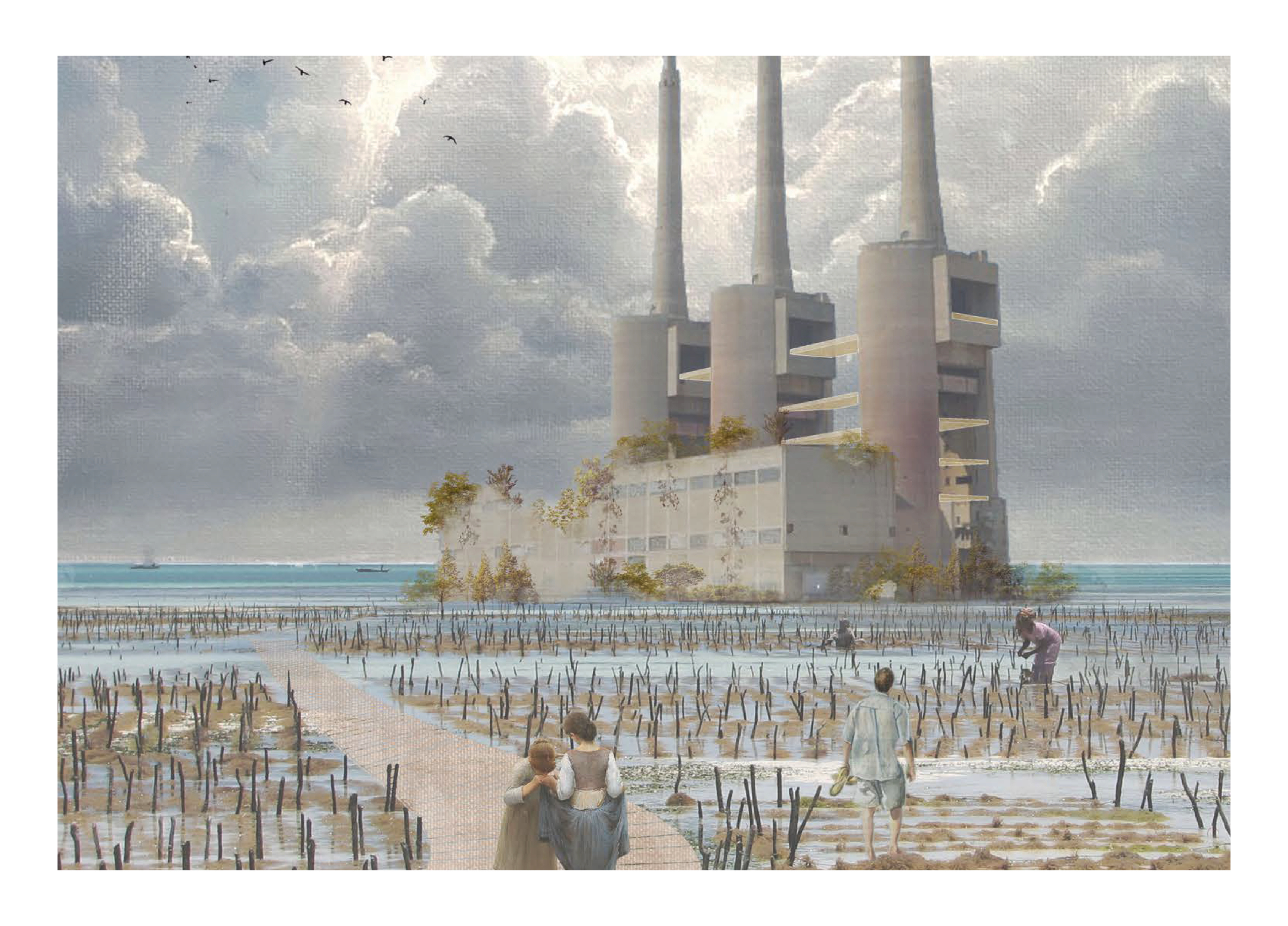 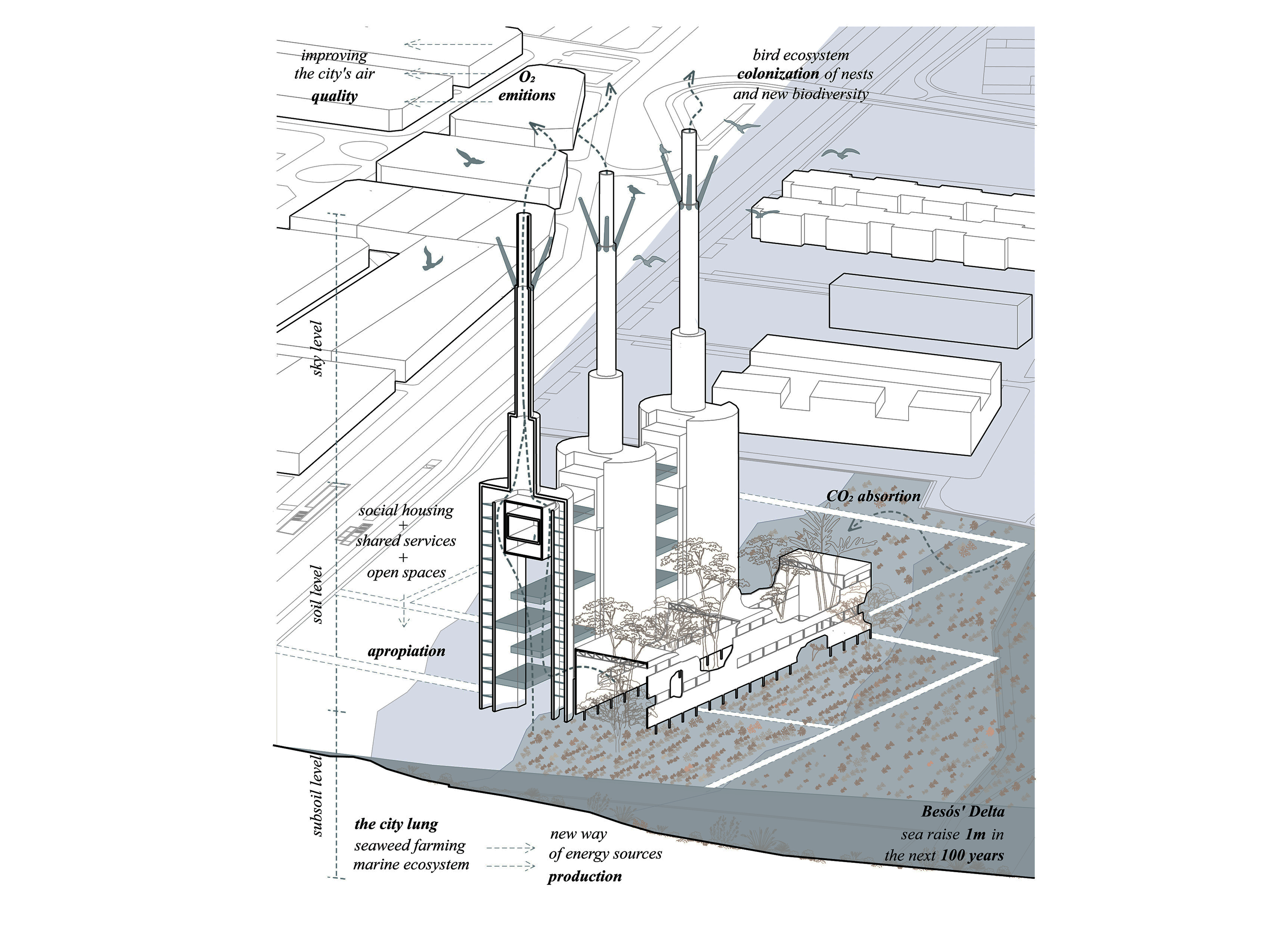 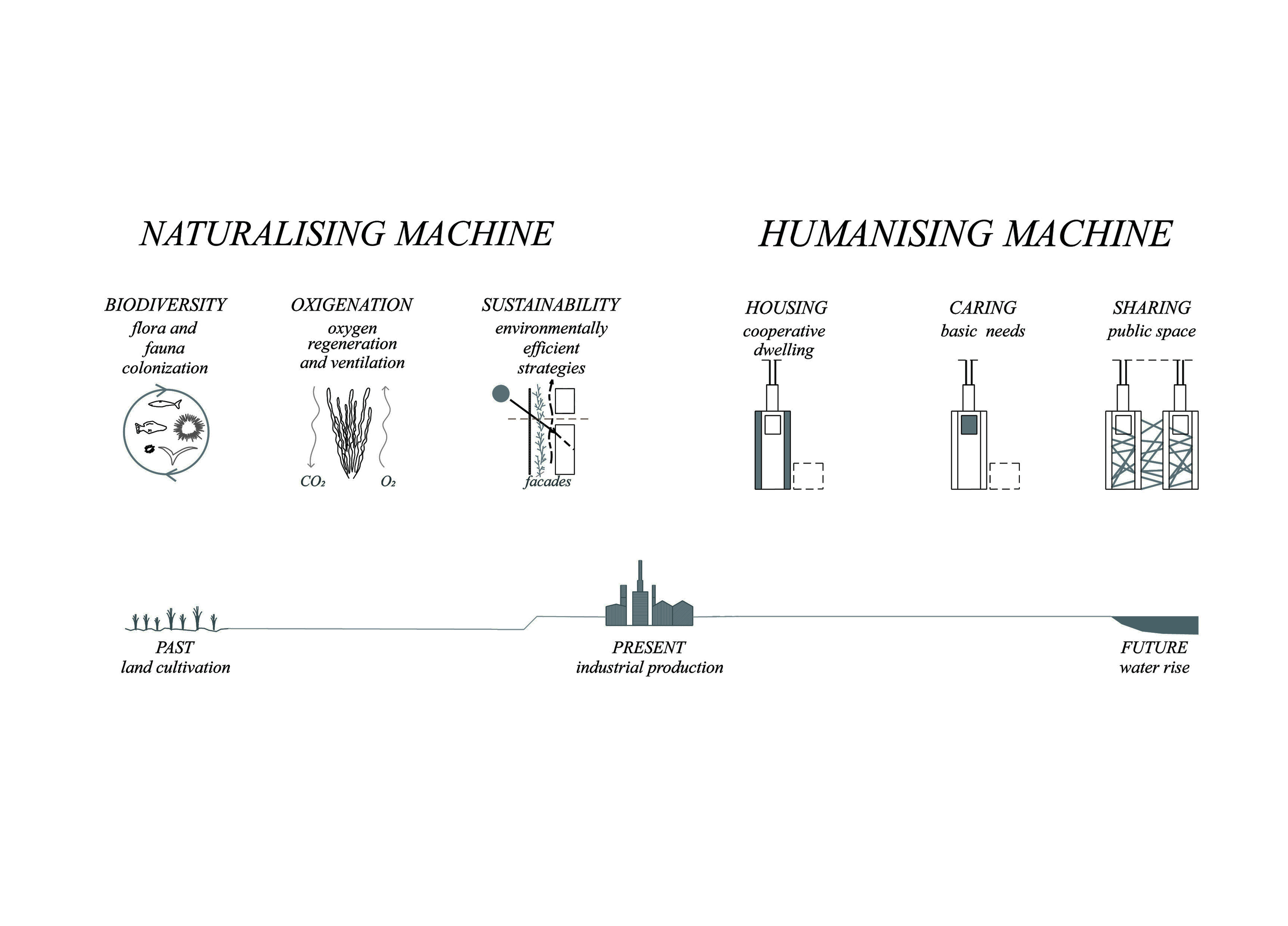 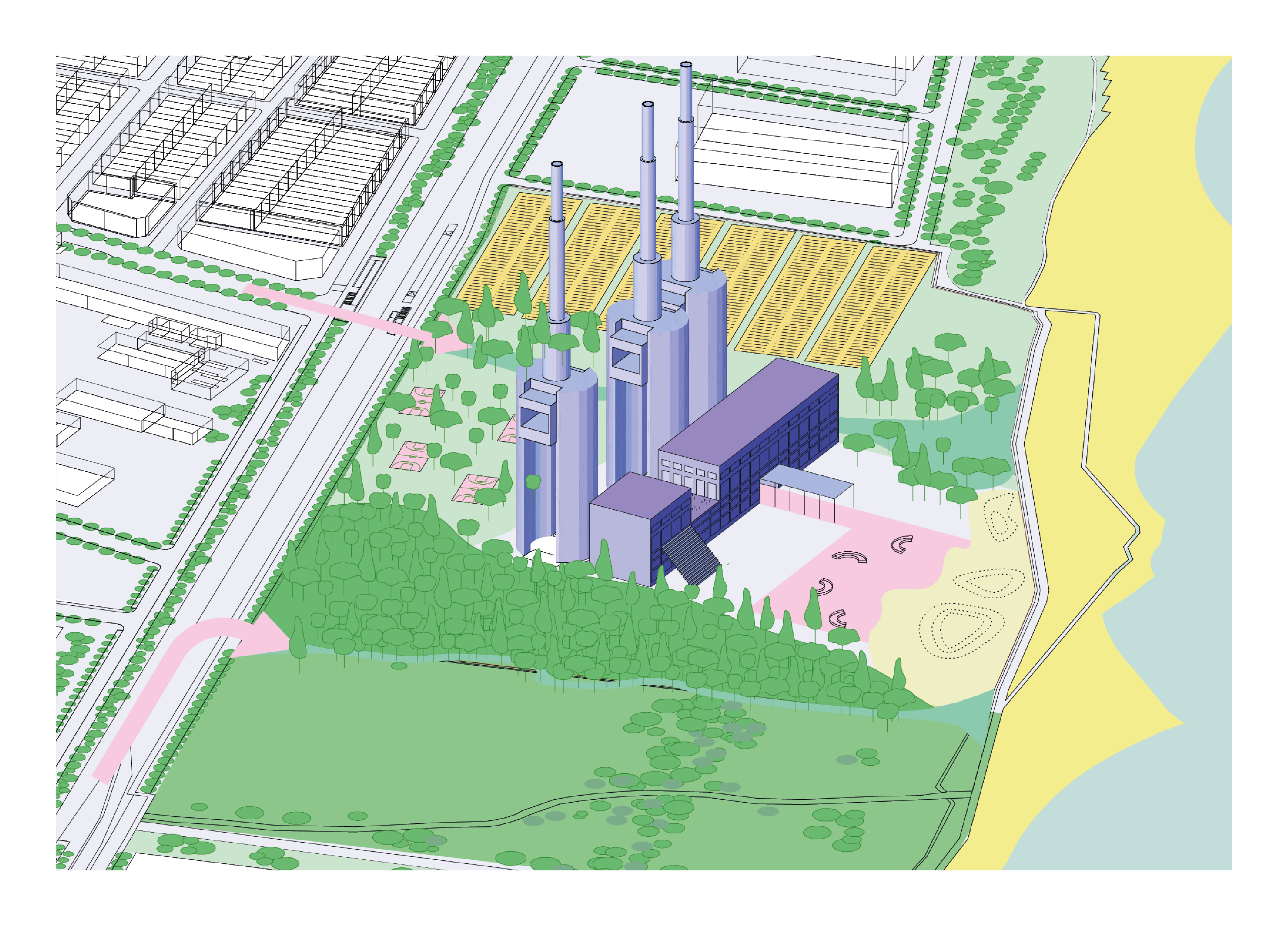 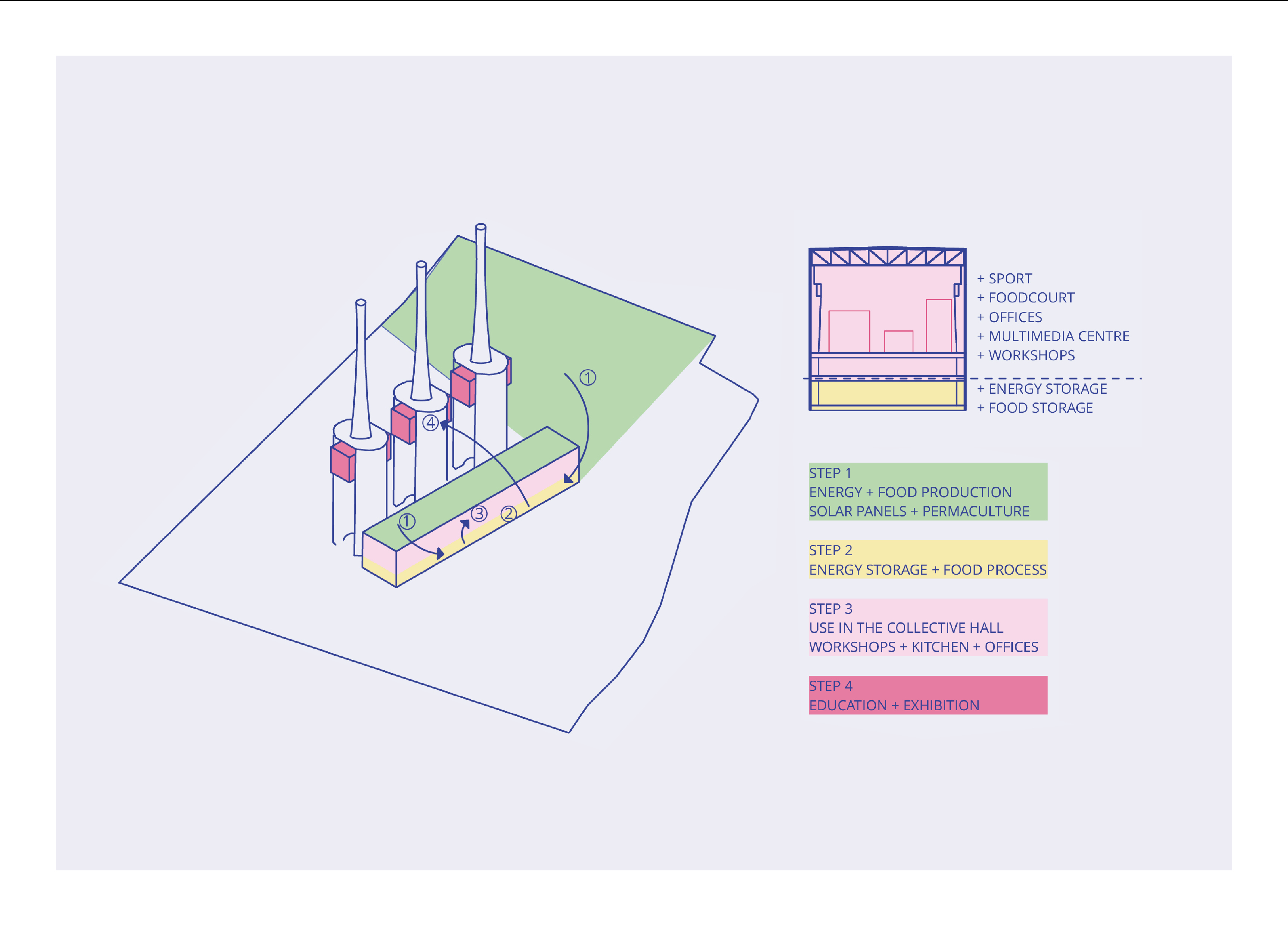 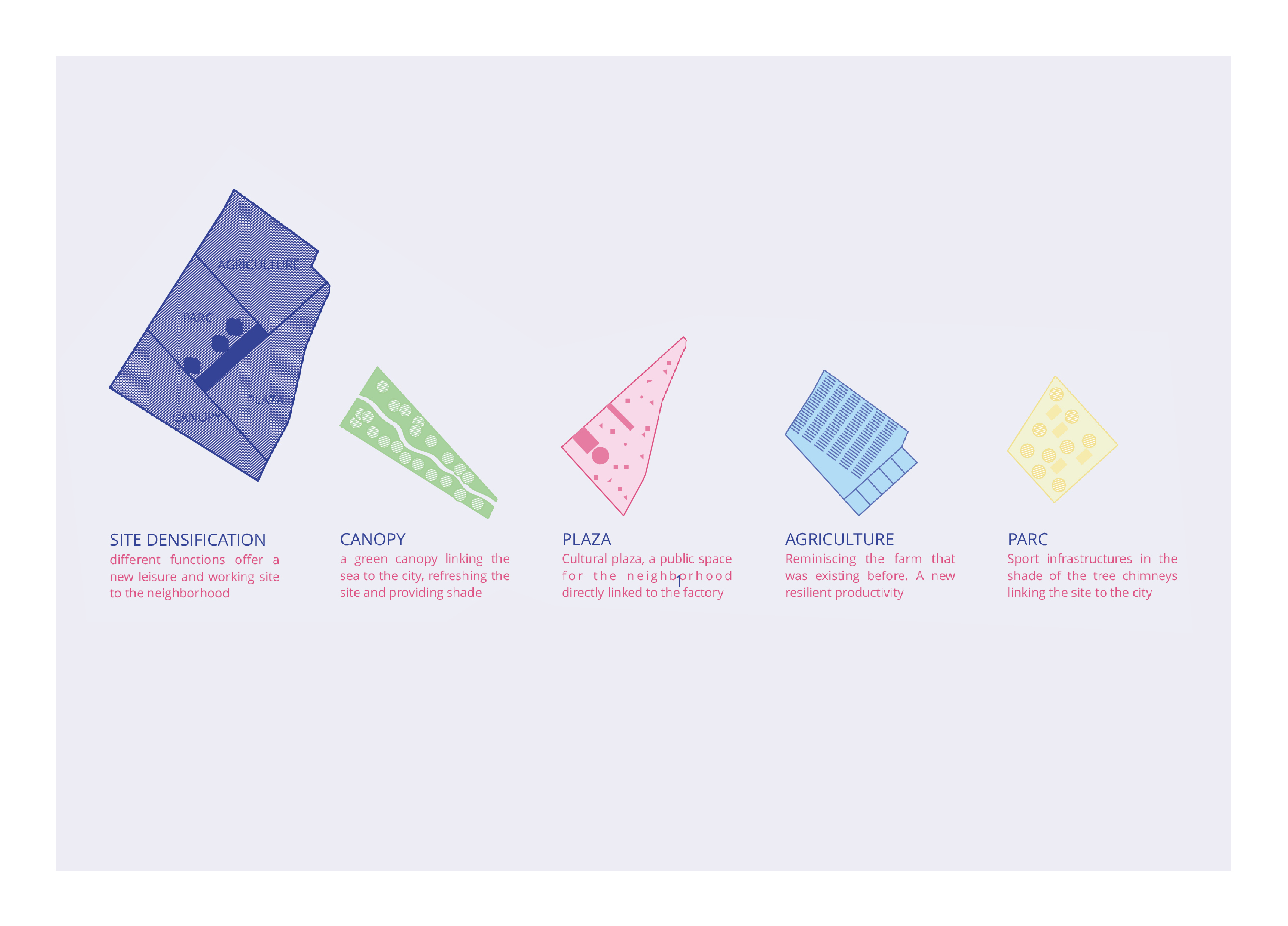 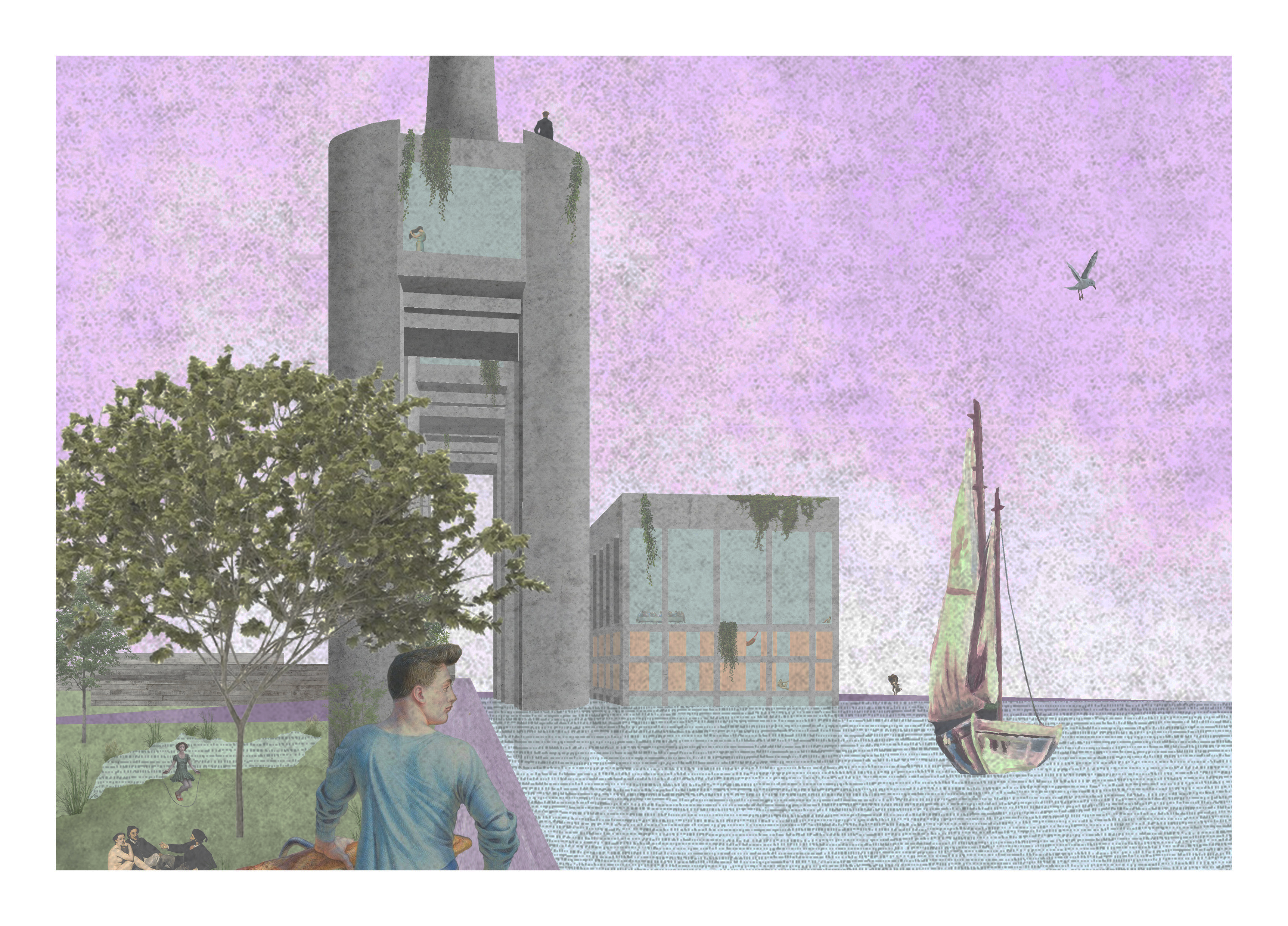 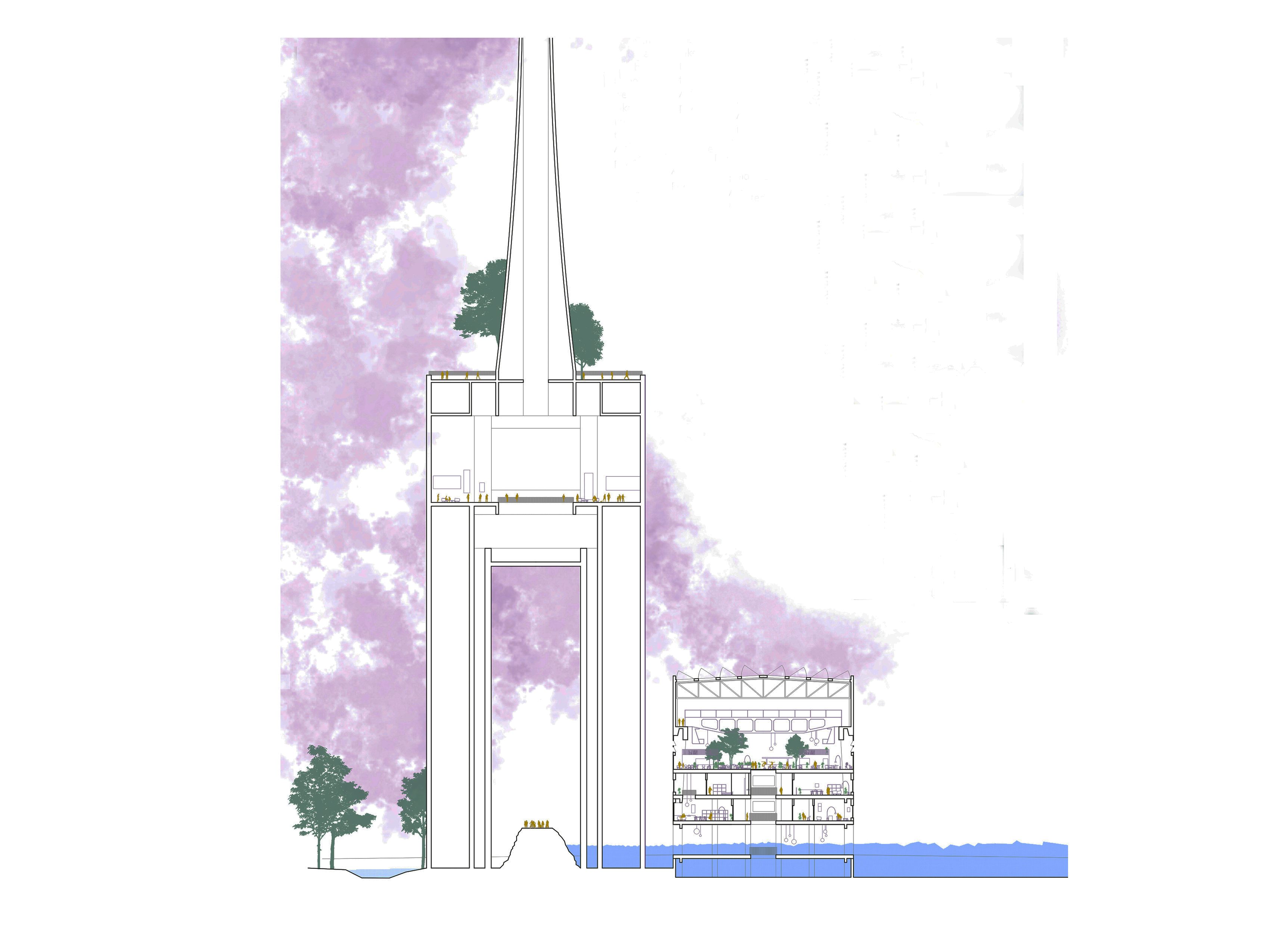 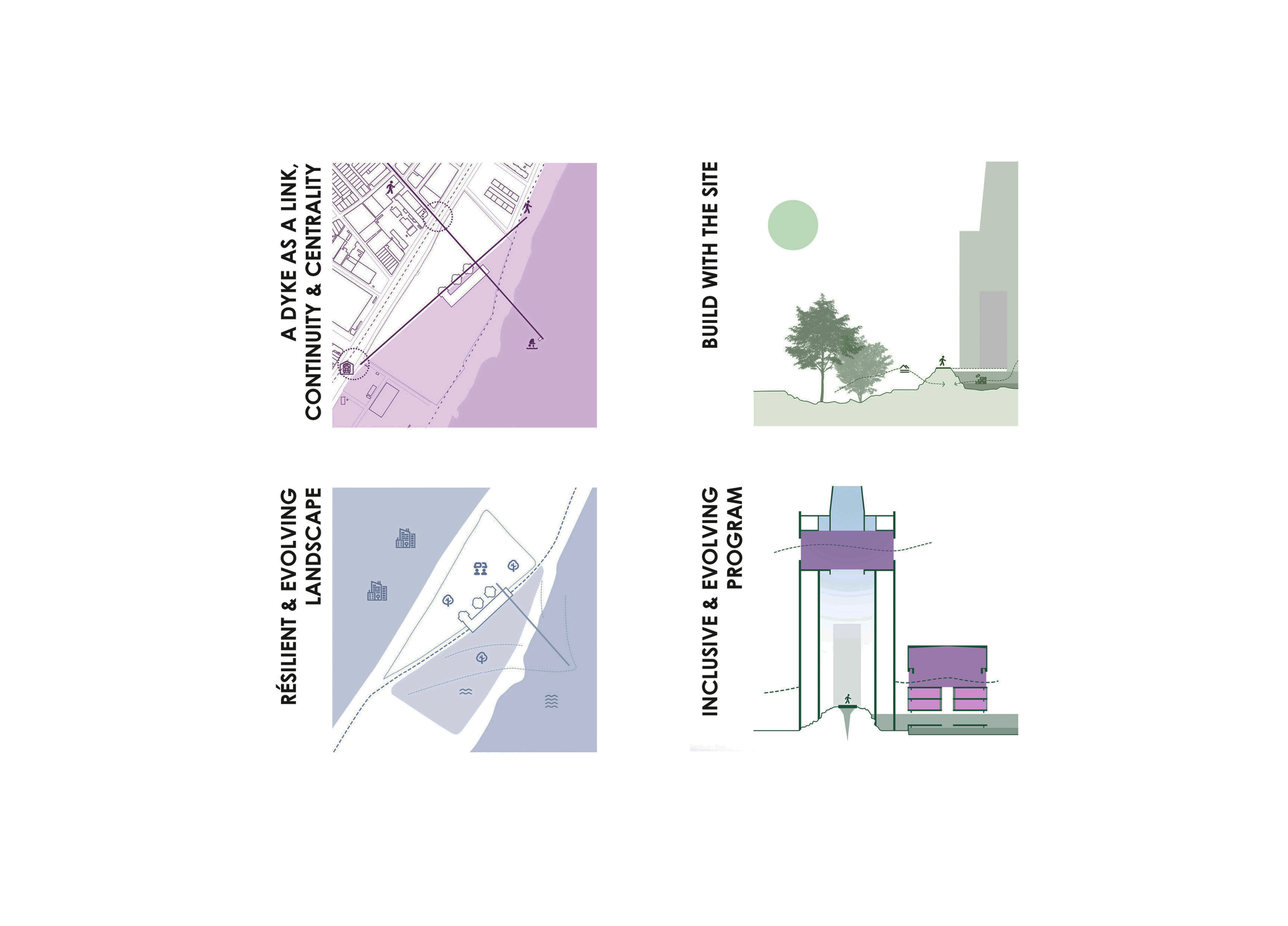 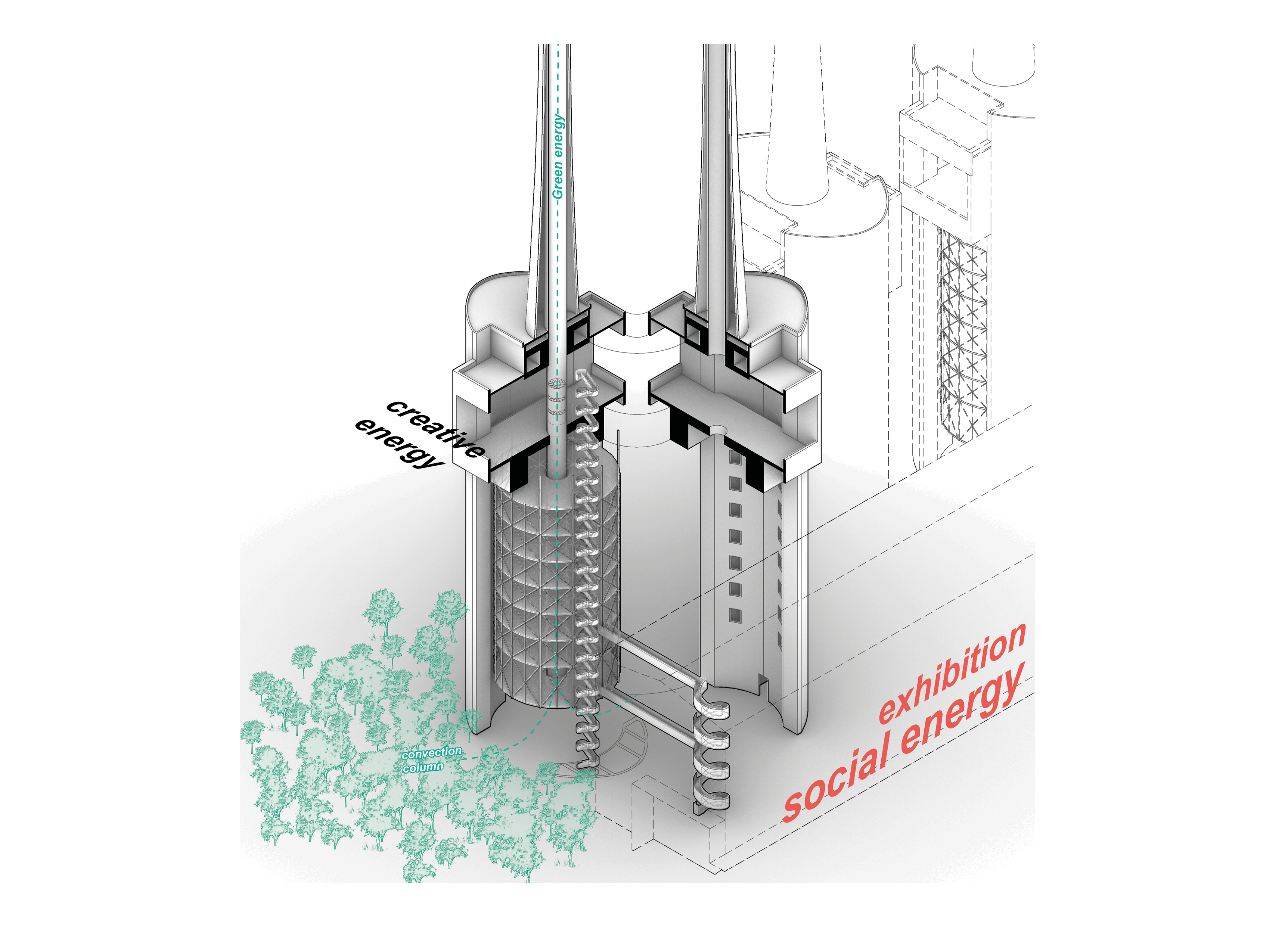 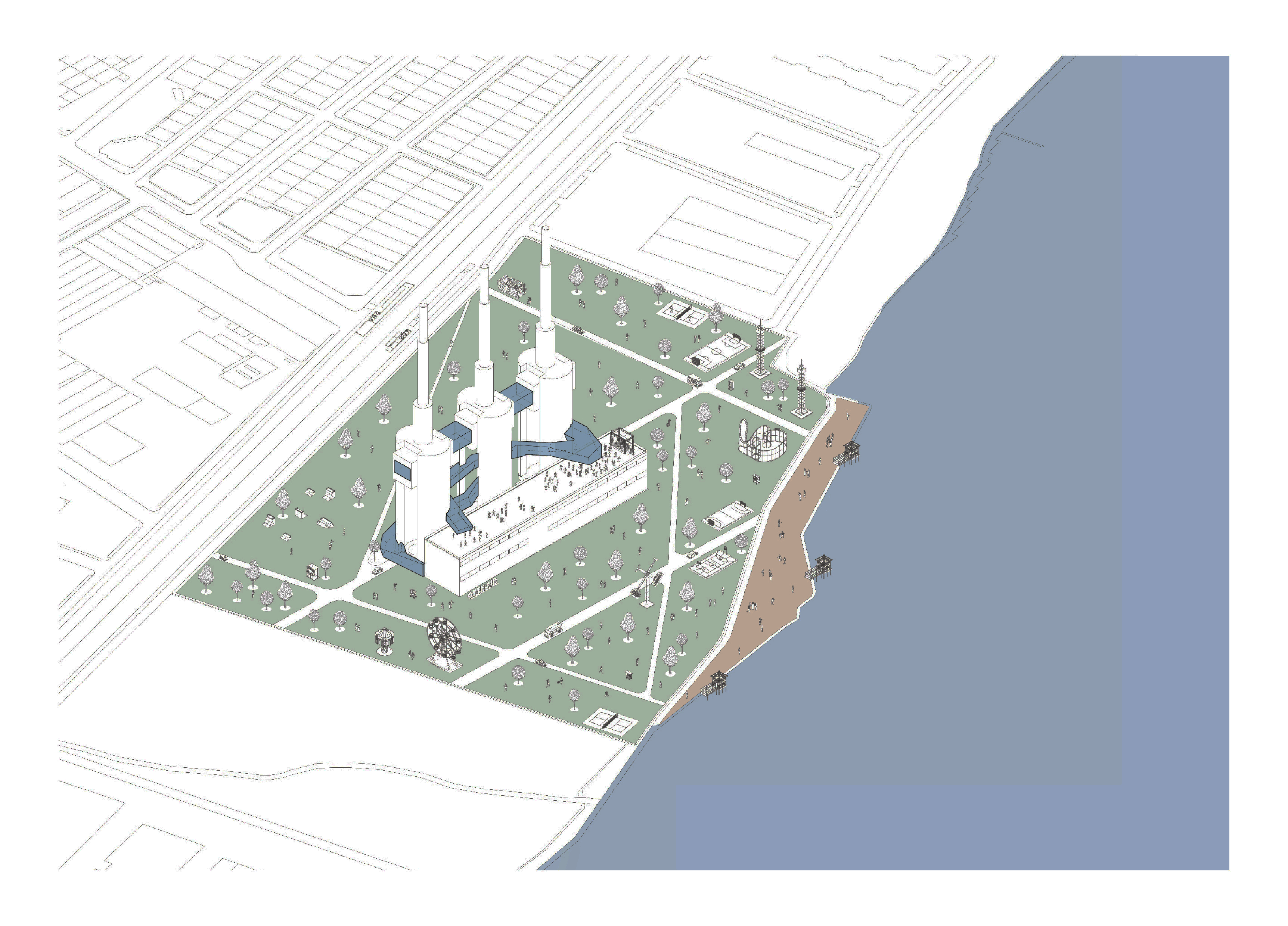 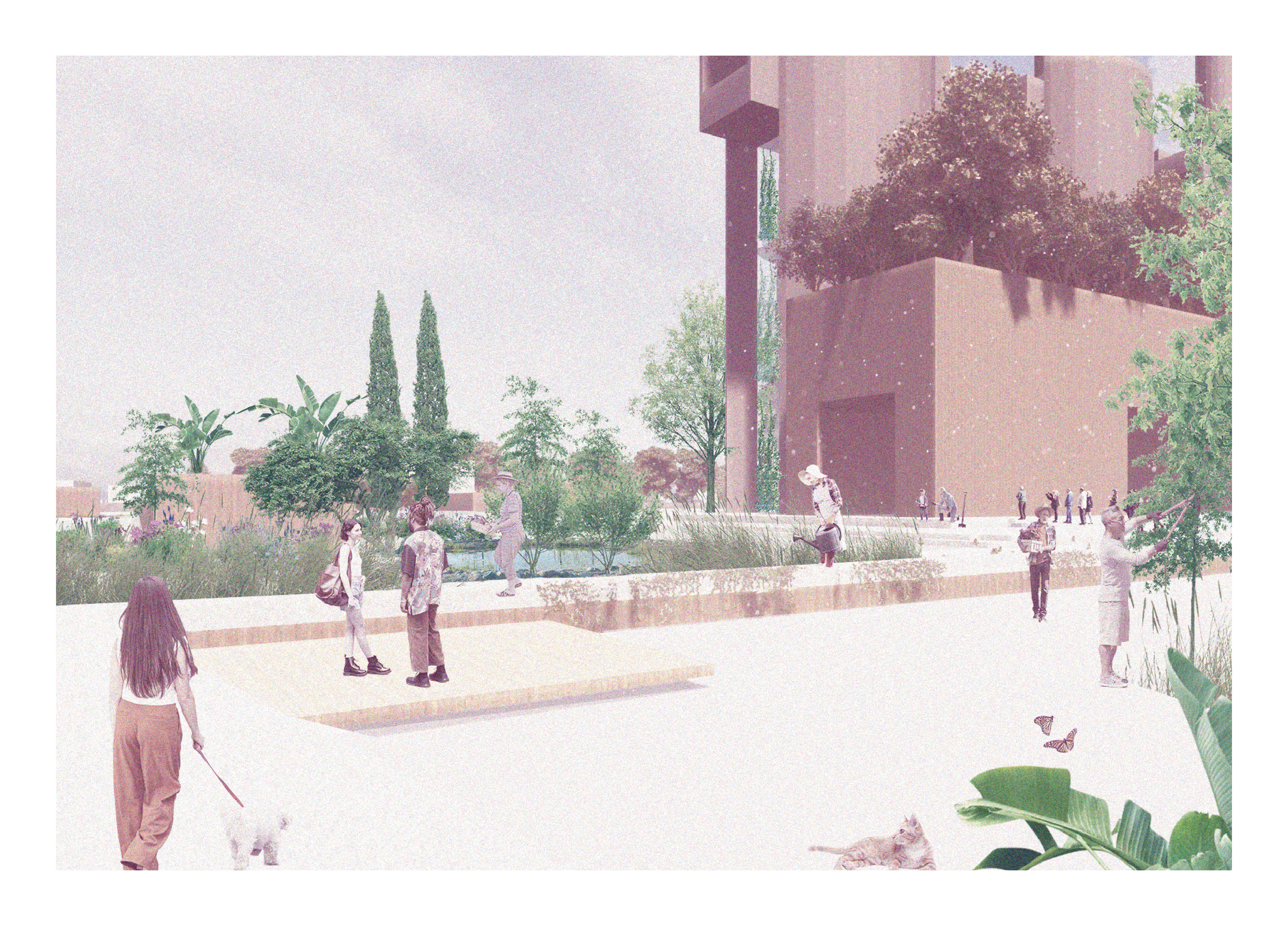 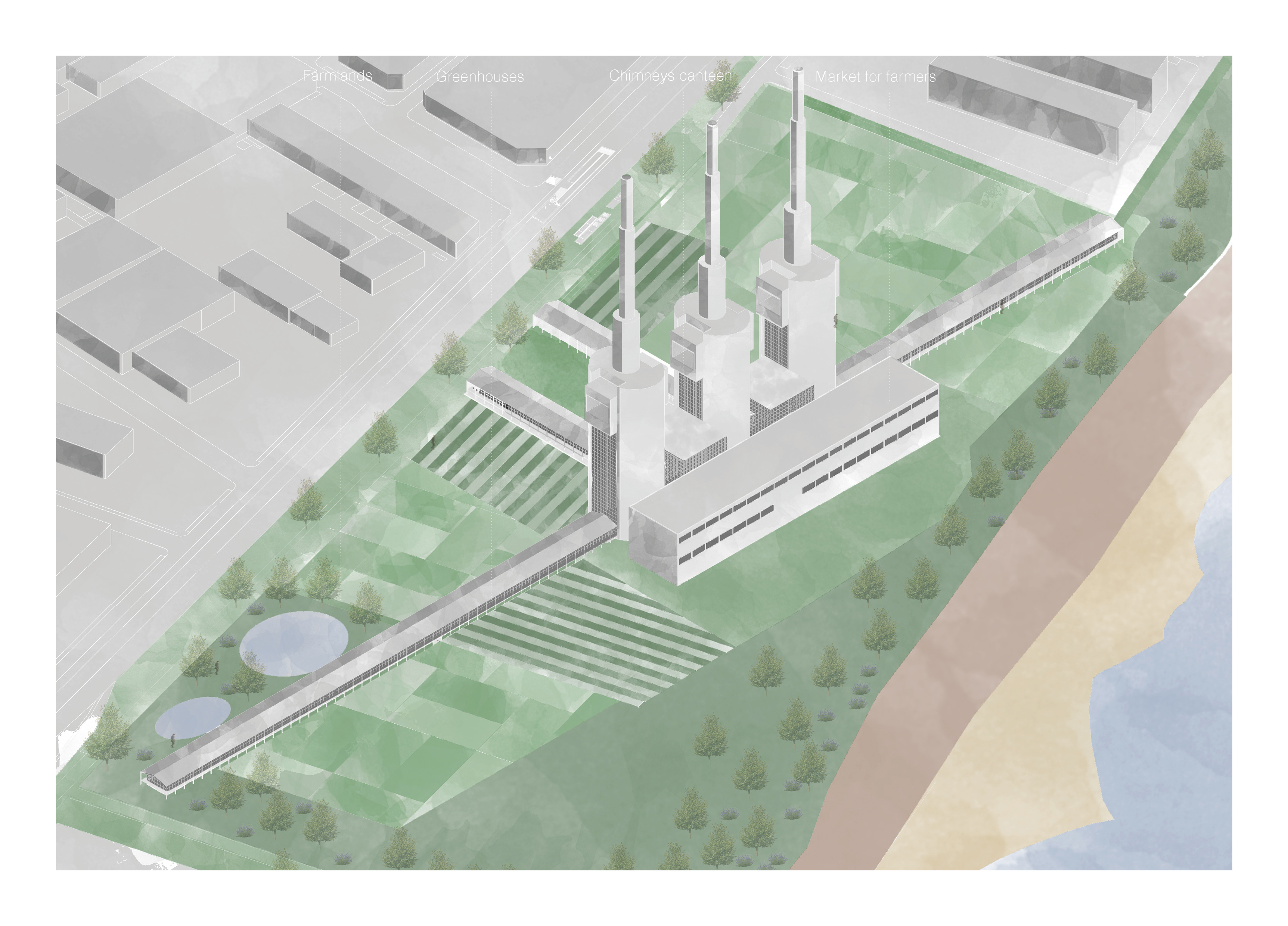 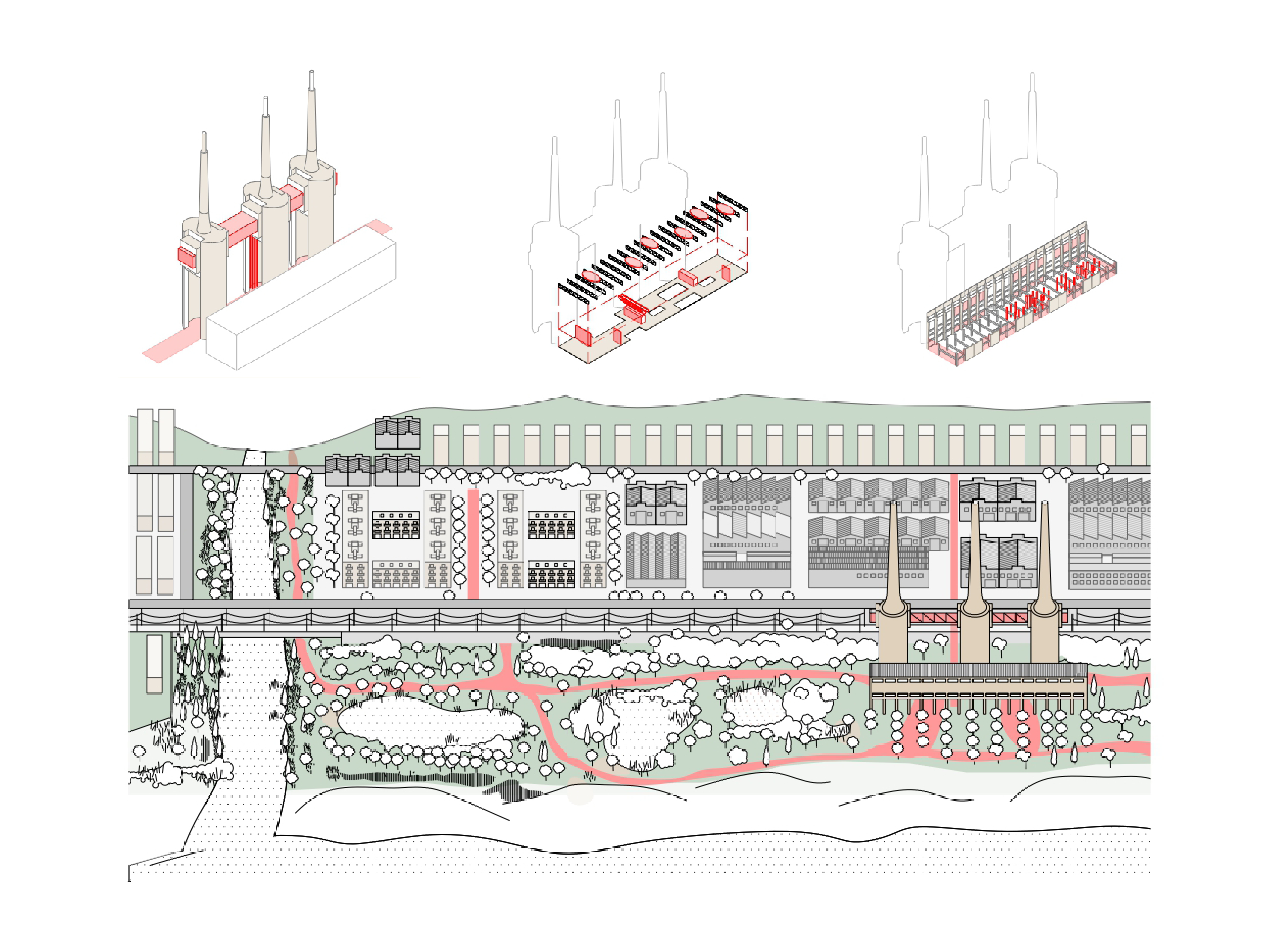 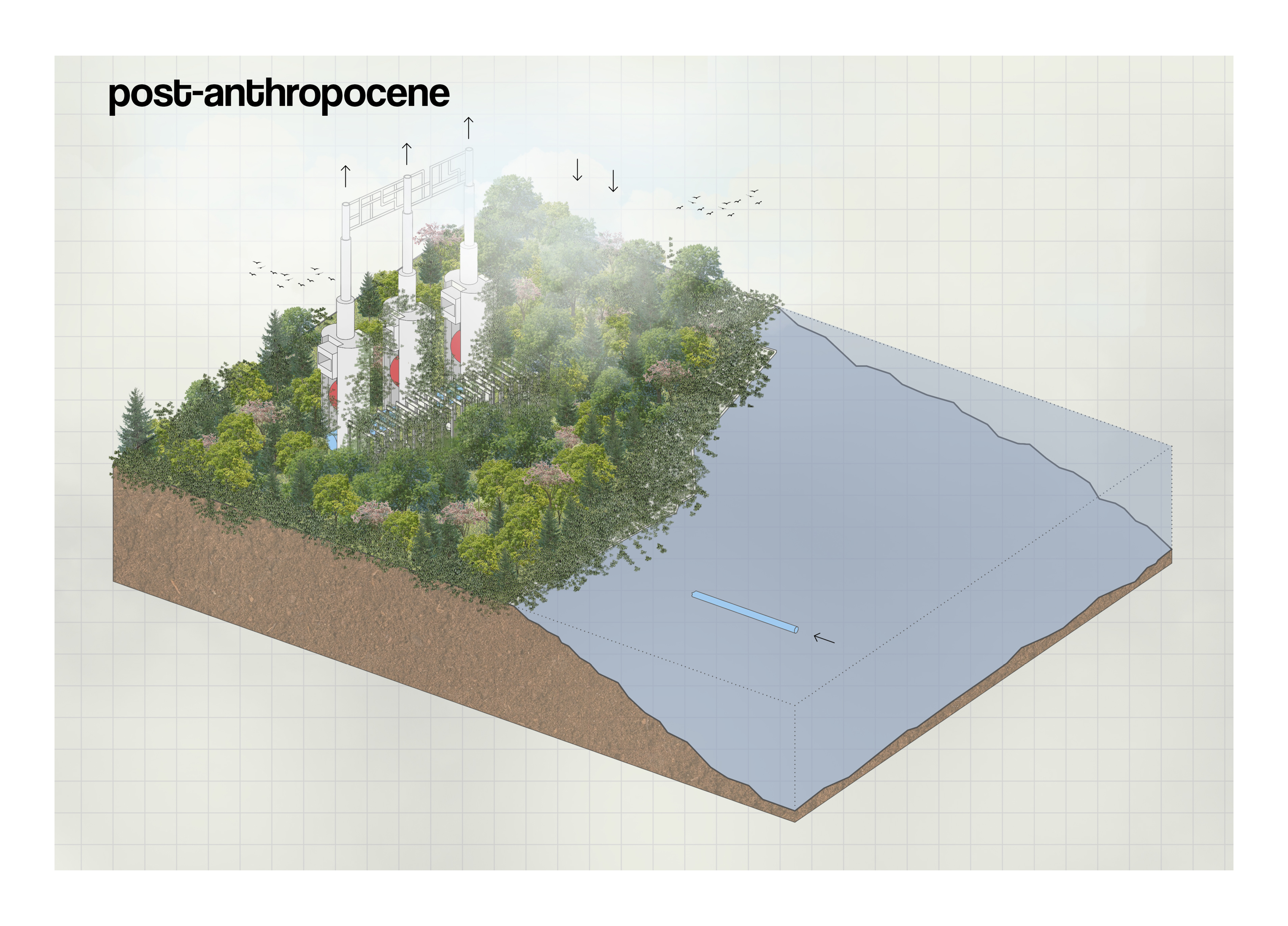 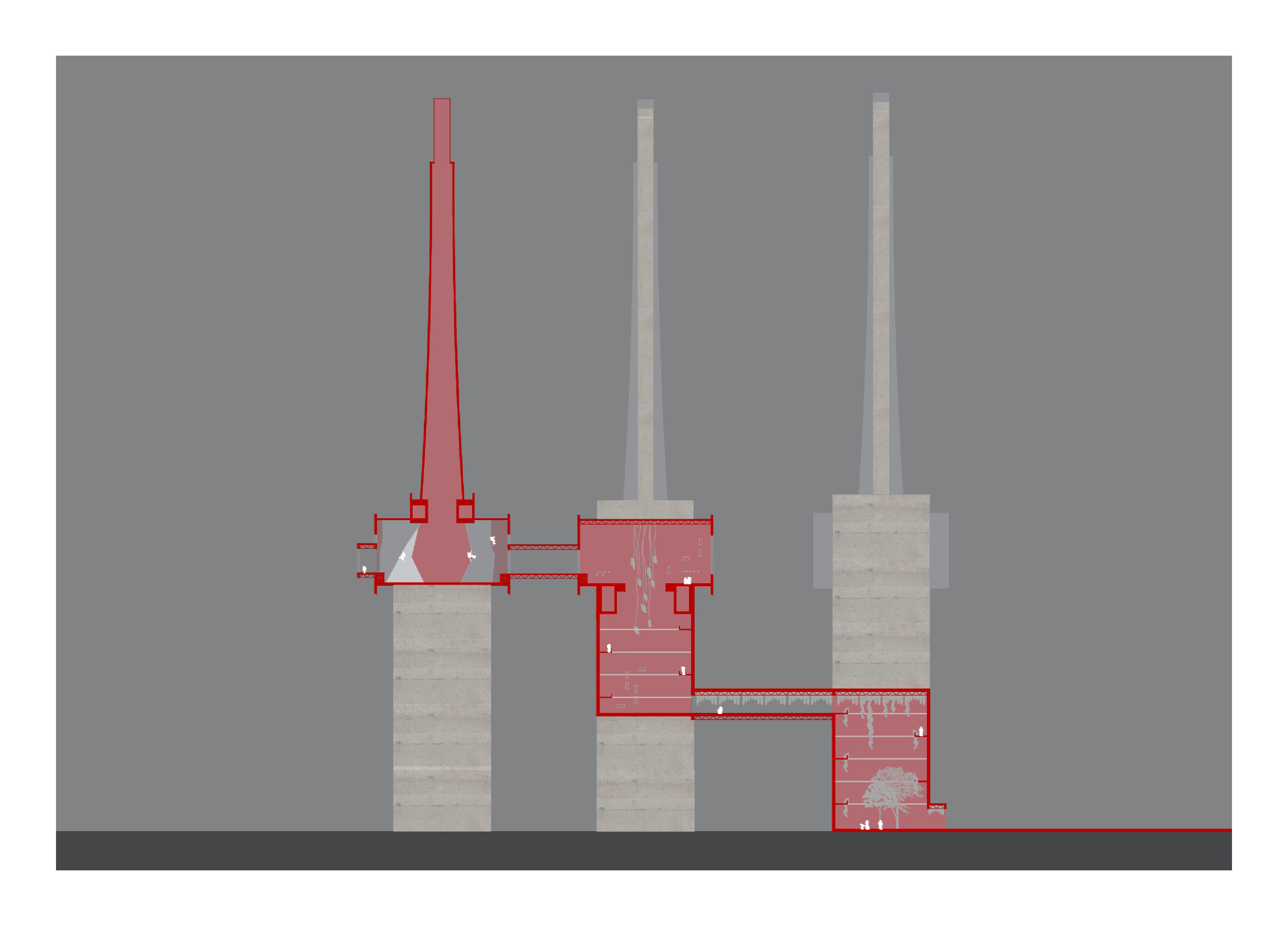 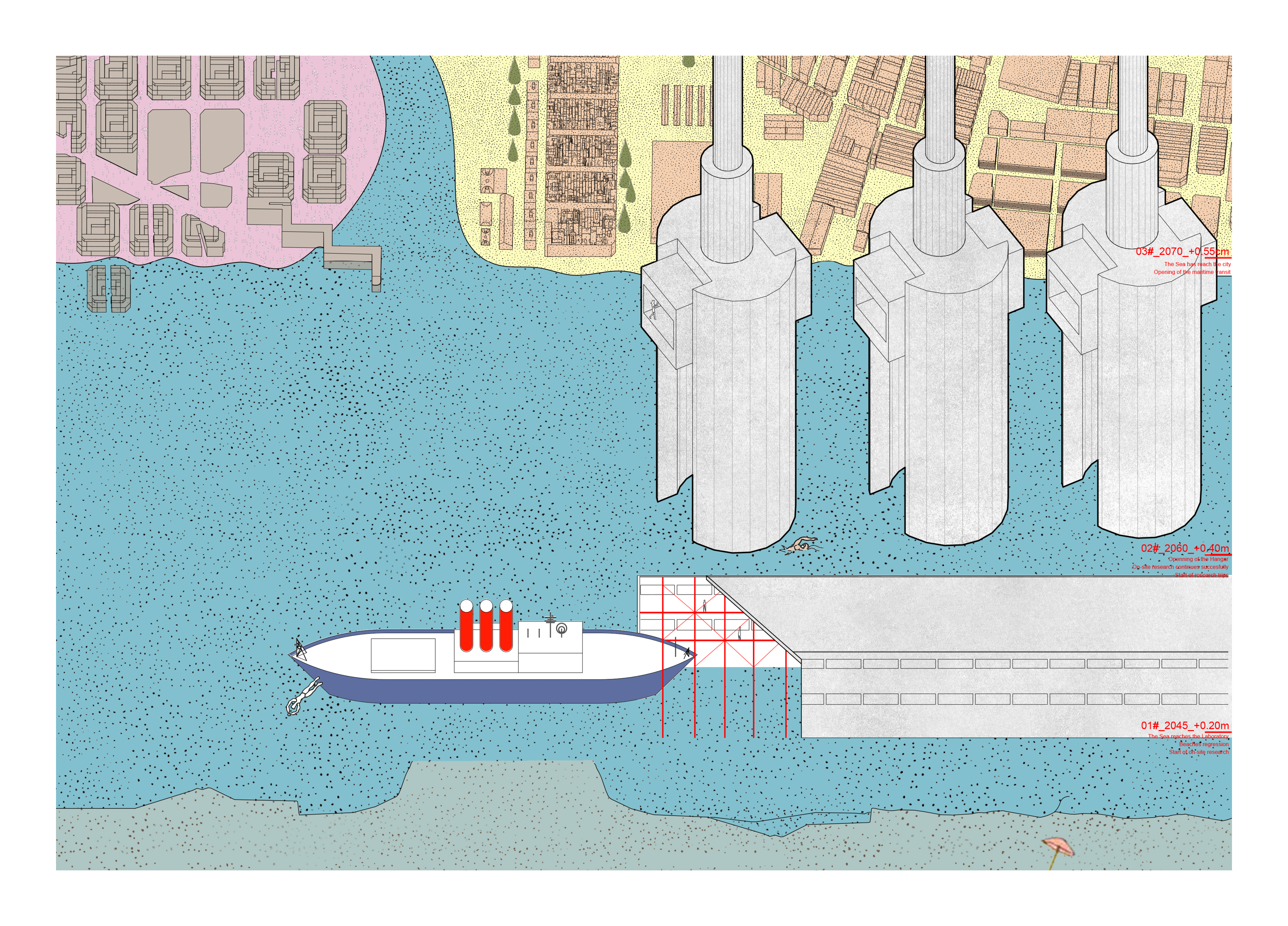