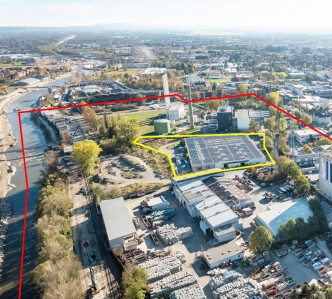 Two things are vital in order to understand the importance of the E15 site. First, its position within the city-structure: Graz consists of a beautiful old town surrounded by residential districts with industrial areas on the outskirts. However, there is one part of town wedged across these different zones. Defined as a productive strip, it bears the exceptional potential to bring innovative forms of production right into the middle of Graz.
The second crucial parameter is the development of a hydropower station – part of the “Smart City” strategy – within close proximity. This project will regenerate the entire area bringing the river back to city level. The E15 site sits enticingly within a unique testbed for new ideas, ready to surface.

In 2013, the city council of Graz anchored the “Smart City” concept as the principal strategy for future urban development. This progressive approach has since generated several innovative projects and sparked an adventurous spirit for new departures. Graz’s beautiful, but environmentally delicate topography - a basin surrounded by hills – calls for a low-emission city. Therefore, new mobility concepts, resource and energy efficient projects paired with the latest technologies are key to achieving this goal. The prevailing mood for innovation is grounded in the raised awareness of requiring a sustainable lifestyle.
With ambitious force the city has sent signals installing neighbourhood managements and fostering a culture of participation. Nothing less than ground-breaking projects are expected within this context.

A creek skirts the site, a forgotten railway line runs nearby, and the River Mur is only a stone’s throw away. Picturesque landscape elements are not the only things waiting to be rediscovered. The site includes a factory hall with a ground floor area of 9,000m2. Its pillar grid system will be reinforced in order to build on top of it. Keeping the existing structure, the new density can reach 2.5. A colourful mix of tenants is ready to be included in the new project.
The task at hand is to develop a hybrid of productive scenarios em- braced within a pioneering project. Create a sense of place with an iconic concept and make the idea a reality.

The E15 site is embedded in an interesting field of diverse projects, allowing for an experimental approach. Old factories occupied by the creative scene can be found next to a waste site or a district heating plant - in between those, hidden places of beautiful and wild landscapes are thriving.
Instead of mixing industry with housing this project is about creating a hybrid of productive scenarios. A cluster accommodating different types of production, education and services which could especially profit from exchanging knowledge, synergy of skills, and facilities for work and re-creation. Weaving existing components of the site into the new project will promote interaction and sharing. Combined with the culture of participation and supportive monitoring it could easily trigger a vivid quarter. The intensification of the green network, the remodeled river banks, the introduction of leisure activities will regenerate the whole area. The already popular north-south connection for bicycles and pedestrians will become even more important. In this setting a beacon project of intelligent typologies will easily attract new businesses. Europan’s call is for an extremely innovative project, yet it must be realistic. The owners are at the ready.

Is there any topographic map? We don't find the elevation of the topography.

There is no topographic section available.

Is there any plan or section of the existing building?

Plans and sections of the existing building: AT-Graz-PS-M3.dxf

What are the legal limits of the plot? Are they in the yellow line? We need them to calculate the estimated FAR.

Yes, the leagl limit of the site is the yellow line.

Which is the maximum percentage of occupation in the plot site?

See answer below, explaining the amount of sealed surfaces on the project site.

The degree of sealing refers to the entire property. The seal can however be reduced accordingly by the implementation of green roofs or the use of oozing surfaces. In this sense, at any rate, an improvement of the actual situation should be worked on. A mandatory requirement is the preservation of 10% of grown soil, which is not compensable.

Excerpt from the urban development concept of Graz on the subject of compensation measures regardin soil sealing:
"Due to the high contribution of green roofs to delay rainwater runoff, green roofs can be made accountable - according to the height of their vegetation layer - to reduce the degree of surface sealing on site.

A floor is sealed when it is completely or partially covered by impermeable material, such as surface sealing or sealing layers below ground or others (surface fortifications, roads etc.). Soil sealing is one of the most significant hazards for soils, because it prevents any exchange. The determination of the degree of soil sealing (the degree of sealing serves for the quantitative determination and means the proportion of the sealed area to a reference area)is especially important for the modeling of the soil water cycle. Maintaining the natural water cycle and soil function, which relieves the public sewer system, reduces heat and heat dissipation and fosters other micro-climatic factors (such as humidity), requires restrictions on future soil sealing. Also in the area of ​​the building land a substantial minimum portion of grown soil is to be obtained. Green roofs as well as oozing surfaces can be made accountable for reducing the intended maximum degree of sealing, depending on the height of the vegetation layer or on the remaining soakability.

calculation for green roofs on the degree of sealing:

sealed surfaces are to be calculation depending on the selected material and its permeability:

No sealing (0%) and full permeability:

The building’s height is limited to 32m, however it is also mentioned that higher parts above 22m have to be argued for. What is then the maximum height that we have to take as reference?

References should be taken from the surrounding and with the nearby powerstation in mind, a height of 22meters was defined as suitable.
It is the aim to integrate the new project into the existing urban fabric, hence 22m seems a reasonable hight to the City of Graz. However, if there are reasons why the project needs to be higher than 22meters, it is possible and legal to extend it up to a maximum of 32meters. Elevations over 32m should be done with a differentiated approach and therefore not extend over the entire floor area. The additional height has to be clearly argued for.

Maximum scape height should be less than 22m. Is this height defined as the vertical distance covered by the stairs or how is it defined?

Yes.
It is the height above the natural grown ground.

Strategic Site: must ALL existing buildings be preserved? Especially along Herrgottwiesgasse and Puchstraße there are very heterogeneous building structures. Can they be “demolished”? Can existing buildings be extended (except the Coca Cola warehouse)? Do plot boundaries also have to be taken into account during densification?

The strategic site asks to connect the existing neighborhood with the Mur and its recreation area. Water and nature is seen as a hidden value of this area, which is not yet made tangible. In order to achieve a porosity, adaptions of the existing built structure within the strategic site are allowed - a tabula rasa approach is not envisaged. Plot boundaries should be considered, but continuous developments across boundaries are possible. The specific future extensions or potential development of existing buildings can be proposed.

How are we supposed to deal with the existing railroad? Is it still used?

The drag railway line is only used for freight traffic by the existing companies. It is owned by the City of Graz and therefore open to additional solutions. It is up to the participants to integrate the drag railway line in one or the other way in order to support the proposed strategy of the project.

Can the solar system south of Fernheizkraftwerk be transferred ?

The strategic site is meant to deliver a vision for a future development process, which can answer the questions of the brief. Depending on your concept, you can adapt things where necessary. Please note that sound explanations for a strategic approach must be provided. (Due to current ownership, no direct access on the solar system of the Fernheizkraftwerk is possible.) The city of Graz doesn't support solar panels on ground level because it takes up a lot of space. Solar panels should be integrated into the builing either on vertical or horizontal surfaces.

In the brief you mention that the size and locations for Schaumbad and the Tribeka are unchangeable. What kind of use is Tribeka?

Is the heating-power plant in the South of the plot (object scale) is active?

Yes, it is active.

Can we relocate or remove some of the current functions on the plot (strategic site)?

Please see previous answers.
"The strategic site is meant to deliver a vision for a future development process, which can answer the questions of the brief. Depending on your concept, you can adapt things where necessary. Please note that sound explanations for a strategic approach must be provided."

Is is desired also for urban scale to reach maximum FAR of each individual plot?

As seen, the most of the banks of the Mühlgang are bounded by fences. Is this regulated by law or is it just a designation of a private territory?

This is not regulated by law but is done on the owners initiative. In case of an accident, the responsibility lies with the owner.

We want to understand which property on the Strategic site is private / municipal. Is such information available in open sources? Do we have the opportunity, if it's reasoned, change private territory into municipal ownership?

The yellow areas on the plan "AT-Graz-SS-M3.pdf" ( = FläWi) belong to the municipality. In case the city is in need for small plots of land (e.g. for bike lanes, bus bays, public space, etc.) an approval procedure will take place to negotiate the transferral of private land to the municipality. Private plots will not become generally accessible. The participants are asked to define areas which should become generally useable explaining why and for what.

Since some of the companies in the Strategic area are secure facilities (recycling center, heating power plant, slaughterhouse, etc.), does it mean that their territories should remain fenced and well protected from outsiders in the future?

One must assume that also in the future some uses will require fences.

Which opportunities do we have in terms of development/changing of heating power station? For example , eastern part of the plant seems unused and potentially can be converted in liveable/productive spaces.

The strategic site is meant to deliver a vision for a future development process, which can answer the questions of the brief. This is seen as a long term process. The task here is to develop guidelines, frameworks, toolkits, rules, elements etc. which manifest the character of the area. Depending on your concept, you can adapt things where necessary. Please note that sound explanations for a strategic approach must be provided.

Who is the owner of the containers and garbage storages on the island, formed by the Mühlgang?

The property is privately owned. The building density is 2.5 as on the project site. Suggestions for a further development are welcome.

How is the locomotive in the site operated (today)? Is there a "train driver" / a supervisor?

Yes, a train driver is operating the locomotive.

The 1-storey high building between the towers of the Tagger Werk is a climbing hall called ‘bloc-house’.