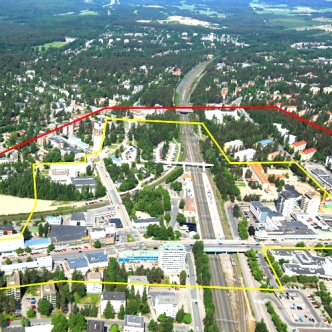 Hyvinkää city centre is located on two sides of the main rail line of Finland. On the east side there is a new shopping quarter, housing and administrational, recreational and cultural services embedded in old industrial buildings. The western side is less defined and lacks character. West from the project area there’s a former train yard that is being developed into an urban district including housing and public services.
The objective is to find an urban concept for the project area with various functions including productive uses. The different sides of the rail line should also be better connected to one another. The new urban concept will be used as a guideline to develop the area with various land owners and other stakeholders.

Hyvinkää is part of the Greater Helsinki area with excellent traffic and logistic connections to many directions. Helsinki is only 60 km away and can be reached in less than one hour by car or train. Hyvinkää was born when the rail line was first built in the 1850s. The location on the Salpausselkä ridge with it’s pure groundwater reserves was the foundation for growing industry, initiated by the wool factory in the 1890s. Sanatoriums and winter tourism became popular thanks to the quality of fresh air and pine forests. Since then Hyvinkää has grown into a lively city, still carrying the past tension between industry, high culture and nature. Developing the city centre is one key project in the City Strategy of Hyvinkää. The goal is to make a city plan for the area west from the main rail line, and to create a vibrant, well functioning, pleasant and safe city centre.

The project site is mainly situated on the west side of the rail line. The density of the area is relatively low compared to the rest of the city centre and there are several unbuilt wooded lots. Many of the buildings are out-dated and need an architectural and functional upgrade. There are also traffic challenges in the area; bridges over rail lines, busy traffic arteries, oversized intersections, a bus station and large open parking areas. On the east side there is a large school campus and a city block that need to be connected to the west side. Some buildings in the project area have historical value and are protected. The train station with its surroundings is architecturally acknowledged and has received an RKY status (culturally significant built environment).

Is there a possibility to have a 3D model of the site with buildings (in sktechup, rhino...)?

3D models of the site (dwg) are available in the Complete Site Folder.

On the last page on the competition brief we are encouraged to present other material to illustrate and clarify the proposal. Where should this material be uploaded?

The 3d-dwg file uploaded on 27th March does not include any 3d-geometry, but only line geometry. Is it possible to get the 3d-model that is shown in the web based model as a Sketch-up, Rhinoceros or a dwg-mesh model to be used as a base for designs and visualisations?

We have now added 3D information to the Complete Site Folder. You can also use the 3D model on the city web site.