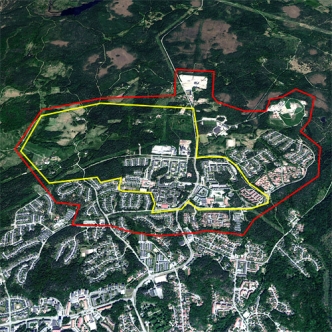 Due to the urban development of the last 50 years the residential areas of Dalaberg and Hovhult are today characterized by segregation. The majority of residents in this area are immigrants who come from outside the EU and many have sufficient working experience. Some of the most recently arrived immigrants are well-educated but not well-integrated in Swedish society. They have the potential, but often lack the means, to create new jobs within various branches. Even those who are less educated can contribute with creativity stimulated by cultural diversity, which is often common in segregated communities. Established locations where the local community can meet and exchange ideas will create a productive atmosphere that encourages entrepreneurship in a broad range of fields. Today the area is already teeming with cultural activities. The area’s proximity to the unexploited nature of Bulid presents the opportunity to develop new synergy effects between urban and rural environments.

The City of Uddevalla lies in the centre of the historic Bohuslän region and to this day maintains a cultural heritage particular to the region. The strategy of Uddevalla is focused on three areas: Life, Passion and Location, leading to a better quality of life.
In Uddevalla, everyone is welcome. Diversity and tolerance stimulate development. The citizens of Uddevalla should feel respected, proud and have the confidence and desire to develop themselves and their surroundings. The city is abundant with meeting places that inspire and develop creativity. Uddevalla is part of the growth regions of Oslo and Gothenburg. The potential of the city is strong due largely to its industrial history and its attractive location in the heart of Bohuslän with the unique combination of sea, forest, mountain and fjord.

The competition site includes residential areas typical for the social housing program of the 1970s, suburban family houses, as well as a large rural landscape where one can come close to nature. The urban design of Hovhult is characterized by only one building type, situated in a rectangular pattern. The Dalaberg area on the other hand includes a more varied form of social housing with buildings up to seven stories. Bulid today is an unused landscape where nature has been left to its own. This area has previously been used by the Swedish military for exercises. Although the competition sites are demarcated, the area can’t be seen as a separate entity. It must rather be considered in the context of the entire city’s urban development.

Strategically located on the West coast of Sweden, Uddevalla has from the beginning developed as a trading hub. Since the industrial revolution, more and more industrial production sites have been established here. With the founding of one of Sweden’s biggest shipyards shortly after the end of the Second World War, the city experienced another commercial boost. This created a need for more accommodations which led to the social housing program.
Soon after, Uddevalla expanded especially on its outskirts, including the districts of Dalaberg and Hovhult. From the mid-1980s, however, global economic transformation gradually took hold in many European cities and at this time even the shipyard in Uddevalla had been shut down along with many other industries. During this period many people became unemployed and moved away from Uddevalla. One consequence was that segregation increased, especially in areas where social housing is prevalent. After time, well-known social problems emerged, such as increased unemployment and exclusion.
To reverse these negative trends, the municipality wants to tap the potential of cultural diversity and realize a well-integrated environment that contributes to the development of the entire city of Uddevalla. This will increase the attractiveness of the newly transformed district for both individuals and businesses and break the pattern of segregation. People who today avoid this area will in the future be attracted by the urban development and want to move here, thus increasing the economic potential of Dalaberg and Hovhult. In the long term this will contribute to the economic and social sustainability of this specific area and of the city of Uddevalla as a whole.

After downloading the files we had to realize that there are floor plans and sections of only one key building. For us it is very important to get to know as much different kind of typologies of the area as possible. Typology of the buildings is key factor for the project. Is it possible to get more informations like floor plans / sections etc. of other buildings?

There are now additional drawings of buildings in the area uploaded to the Complete Site Folder.

Is the ownership of the Million Program homes private or public? If yes, with what percentage and in what areas are they located? and finally how does the process of assignment of the public housing works?

The majority of buildings in Dalaberg and Hovhult are owned by Uddevalla Hem which is a public company. The apartment houses around Lillbräckan are owned by a private company. In addition, some apartments in the northern part of Dalaberg are managed by a cooperative.

Even in residential areas with social housing and their related problems, the general shortage of available homes is evident. Assignment in this particular residential area is regulated by a queue system where people have to apply for an apartment as it becomes available. This contrasts how it was 20 years ago when people were moving away from this area, leaving enough space so that those with lower income could easily move in.

Please find a map of public transport (bus traffic) and a dwg of the city of Uddevalla uploaded to the additional material in the complete site folder.