SITE 1 - CREATING AN INTER-CAMPUS DYNAMIC AXIS
Historically the University of Pavia was located in the very heart of the city, in a building with a series of courtyards that multiplied porosity and connections with the urban fabric. As it was in the mood of time, the new campus Cravino was built in the 70’s at the Western edge of the city, well deserved by a ring road but poorly accessible for pedestrians and bicycles. The campus itself is monofunctional, only occupied by university facilities that are closed at night and in the weekends, whereas services and student accommodations are missing.
At present, the transfer of the San Matteo hospital area located between these two entities raises the question of its future use and gives the opportunity to improve the links between the inner city and the new university campus. The task of the workshop was to create new connections, to requalify and secure the public spaces, to rethink the station area and its surroundings as well as to invest the wasteland at the back of the rail tracks.
In a common discussion with the group on possible conceptual approaches we identified three different strategies, developed by the three teams individually afterwards: A strong linear connection, a careful work on the two currently vacant contact spaces and a network of smaller relationships. These scenarios open a broad field of possibilities, thus opening a debate between the city of Pavia and its university about their common future. 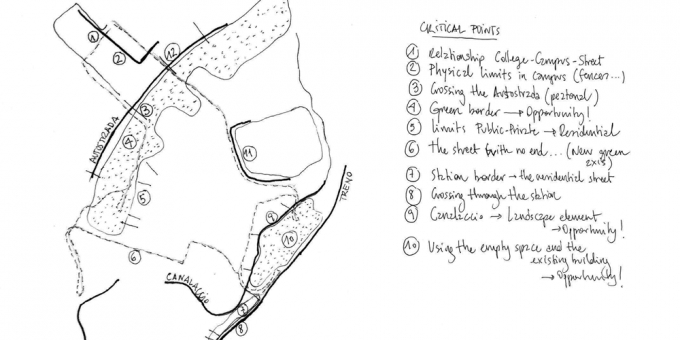 The proposal is based on a careful lecture of the margins between the campus Cravino, the so-called intermediate city and the historical city. The present cuts of the mobility lines of the motorway and the rail tracks form a space of borders, interpreted as adaptable surfaces. Sensitive drawings express the main concept, it consists in redefining and characterising these limits, the vegetative one at the motorway and the mineral one close to the railway area.
By inserting mineral elements in the natural border and vice-versa, the team aims to create a new perception of the differences. By taking advantage of the existing, they re-establish the broken network and give a new value to the place. Landscape interventions on both sides create a unity and help to better identify the spaces, multiple connections across the two surfaces bridge the existing gap. The work on the blind spots is continued on the programmatic level, the currently perceptible voids are filled with a multitude of small interventions, here again to provide new uses and activities.

- Naviglio: A Chance of Coexistence Between Students and Citizens
- Sharing the Ticino River: Sports and Leisure