INTERVIEW
Click on the images to enlarge
1. How did you form the team for the competition?
Bento started its activities two years ago. First, it was three friends, Charles, Florian and Francois, who left recently – we all studied together in Brussels – that wanted to continue the adventure together after the studies. At the beginning, the work was based on experimenting and searching on natural/living materials. Bento really started from that approach, from the raw natural material, to feed the architecture. Corentin joined the team later and added his knowledge on earth construction, with the same logic, material and architecture that feed each other, while both experimenting with materials and designing project. Doing the competition was the logical following step for us! It enabled us to outscale our experimental process on a bigger project, first theorical, and after, we hope so, real…

2. How do you define the main issue of your project, and how did you answer on this session main topic, Living cities?
The starting point would be the answer to the last question. When we started experimenting around the mycelium, we tried to understand how the material works. This is a very specific material.  The mycelium, is the root network of the fungus. This has huge stakes in reducing the impact of construction. It is living matter, which works by proliferation. In fact, unlike most other construction materials that work with a binder whose production requires excavation, cooking and whose setting is chemical and irreversible, the mycelium works as a growing network. From a cloned cell, the mycelium is inoculated into a sterilized plant substrate, hemp, within a mould in which the shape and growing conditions are controlled. So, this would be the first link with the session topic, talking about a Living material, to build the Living city. Our answer started from our past and present research, it’s quite an exciting link!
Starting from this understanding of the proliferation process, we wanted to outscale little by little, from the recipe we developed bricks, then furnitures, a small construction and, what we would like to implement in our project for CIVA, a construction at a bigger scale, that would use all the properties of the material. Mycelium has good insulating and acoustic properties. Then, we imagined we could use this natural material to insulate all the existing building, and the new building we would build at center of the project. Following the proliferation process, we dreamed we could imagine a growing insulation, that would encage a secondary structure we would fix on the masonry, and would grow along! A living insulation!
Secondly, we thought the program could be an answer to this first point. We can talk about natural materials, insulation, but how could we ensure the supply? Indeed, as a congested European metropolis, integrated into the network of the European megalopolis, Brussels is highly dependent on supply circuits for raw and, above all, processed materials. Within the metropolis, only high added value economy is generated. We would suggest that the metropolitan area could accommodate production sites for materials based on plant fibbers and mycelium, in order to be able to supply the entire built fabric of Brussels. For us, the had to be at the center of this process! Then, we decided to transform a large part of the old building, the building from 2000, into a laboratory and place of production, inside the city to produce for the city. We called it « Micro-Factory ». The materials produced in the "Micro-Factory" are ready-to-use bricks or insulating panels. All the interior insulation of the "Architecture Center for regenerative materials" is carried out with its panels in a logic of short circuits and circularity. This one proposes the installation of a laboratory on the ground floor, structure which will accompany the production of building materials in the basements of existing buildings. Thus, it is the 2500m2 of basement that is transformed into a large production hall, lined with incubators and pasteurizers of the raw material. This could be replicated on a larger scale. This system could be generalized, and we could see buildings under renovation producing, within their vacant floors, their own “growing” insulation. A living program!

3. How did the issues on metabolic and inclusive vitalities and the questions raised by the site mutation meet?
A part of the answer may be found in the last paragraph of the last question. Moreover, as the saying goes, the best resource is the one we don’t use. We should work with what already exists. In his book "Offices of the past, inhabitants of the present", Pierre Laconte tells us that in 2016, 1.6 million square meters of offices were empty in the Brussels Region. We could consider using this available land as a resource, within the Brussels metropolis itself, transforming empty platforms into places of production of building materials. The CIVA is based in the center of Ixelles, one of the 19 cities that form the Region of Brussels-Capital. As a former Center of Architecture, close to a University of Architecture, it would be a perfect place to start experimenting and responding concretely to these issues.
To complete this “living program”, that a laboratory couldn’t satisfy completely, we proposed to create a large room for 1:1 scale experimentation. It would be settled into the XIXth electric fabric building. Added to the production part, this would add the learning part, by experimenting and raising awareness. We called this space the “Macro-Factory”.
4. Have you treated this issue previously? What were the reference projects that inspired yours?
The "Macro-Factory" is conceived as the "Grands Ateliers du Benelux", with refers directly to the « Grand Ateliers de l'Isle d’Abeau », in France. It is an experimentation hall for building on a real scale, around organic and geo-sourced materials. This infrastructure is part of a vast regional or international network of Schools of Architecture, from the "Faculty of Architecture La Cambre Horta" in Brussels to "TU Delft" in the Netherlands. This basin requires an ambitious infrastructure to be able to carry out a european educational project, capable of structuring everyone in living and natural construction, integrating all sectors and all actors, in a logic of exemplary circularity.
This is what managed to do the « Grand Ateliers de l'Isle d’Abeau » in France. Settled by schools of architecture, Lyon and Grenoble, this place enabled to teach to a lot of students and professionals, issues of natural construction, based on a learning by experimenting, central into the thought of CRATerre (Centre international de Recherche sur l’Architecture de Terre), research lab on earth construction, who also worked on the settlement of this infrastructure.
Each geographical/cultural area should have this kind of infrastructure, to spread the knowledge on living / not-carbonated architecture.
The “Micro-Factory” system would be based on our own, already quickly explained, practice. The lab could outscale the process and enable to face the huge needs and issues of the in-city insulation topic. Some projects including living materials start being built and are quite inspiring, the work of the dutch designer Marjan Van Aubel for example… Indeed, in the Dutch pavilion for the 2020 Expo in Dubai, the acoustic insulation of the vertical-farm inside was realized with mycelium-panels.
In conclusion, a large part of the new interventions will be carried out in wood structures. It is worth noting the influence and respect we have for Simon Teyssou and his architectural studio based in Cantal, France. His architecture is made of wood and/or other locally available resources. They show great elegance, eloquence, and a perfect alchemy with the sites in which they are set.
5. Urban-architectural projects like the ones in Europan can only be implemented together with the actors through a negotiated process and in time. How did you consider this issue in your project?
First of all, talking about the program itself, we think that the proposal is totally realistic, technically and economically. A clear timeline could be settled for the implementation of each part of the program, starting with the production part, “the Micro-Factory”, to the experimentation-learning part, “the Macro-Factory”. The “Micro-Factory” could be built first and could start working while the second phase is launched, to be able to face as fast as possible all the exposed issues.
Secondly, we studied at few meters of the site, in La Cambre-Horta Faculty of Architecture (ULB). We have a story with this building, where we’ve been quite often! We are also based in Brussels. We are concerned with those topics and ready to start!

6. Is it the first time you have been awarded a prize at Europan? How could this help you in your professional career?
Indeed, this is the first time we’ve been awarded a prize at Europan. First, we hope we would be able to implement the project we worked on. We are deeply concerned with the topic itself, making the bridge between architecture and research on material, and the location, Brussels, were we studied and are working. We would like to be a part of the actors of a transition towards a living architecture!

Has your team, together or separately, already conceived or implemented some projects and/or won any competition? if yes, which ones?
Two members of our team have already built a center for orphans, « Xewa Sowe », in Benin (Western Africa), composed of 10 earth buildings (area = 800m2, budget = 110000 euros)
For this project :
-    Finalist of the Terra Award 2021 (+ exhibition and book)
-    nominated for the European prize Philippe Rotthier  « Genius Loci » (+ exhibition and catalogue)
-    Finalist for the « Green solutions awards » 2021 Bento realized an exhibition called « 52Hertz » in the CACLB (Centre d’Art Contemporain du Luxembourg Belge), june 2021. For this exhibition, we realized furnitures, mycelium panels and we built a ceramic hoven in burnt wood.
Does your team share a common workplace? if yes, give us a short description:
Yes, we are currently working in the Jolimont Castle in Brussels, an old XIXth century house that will be under renovation soon into a conference / exhibition center. Until this time, the owner wanted to create a living lab where some projects come to experiment and « grow » in the existing building, around art, design, science… This is where our experimental lab is settled. There, we are experimenting around the mycelium, living material that is at the center of our project for Europan. This lab is shared with other people that also work around the mycelium, the knowledge is then emphasized! This is also where we meet to discuss around our projects. This place is a living and inspiring translation of what we were trying to think for the future of CIVA. 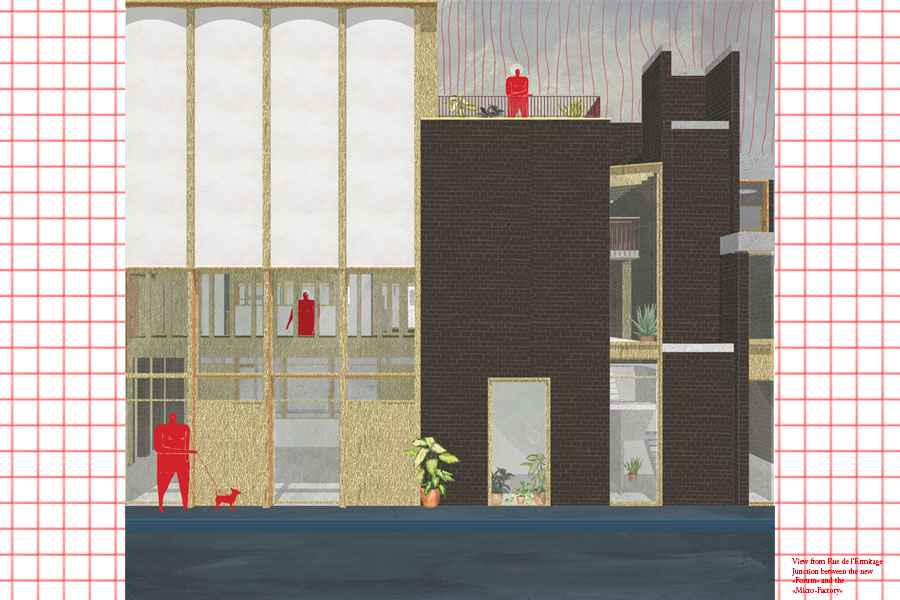 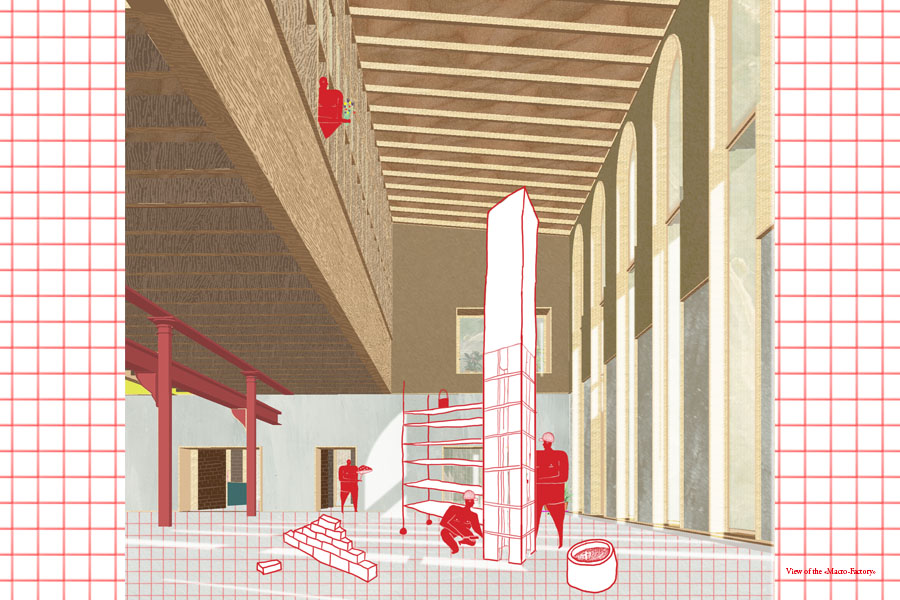 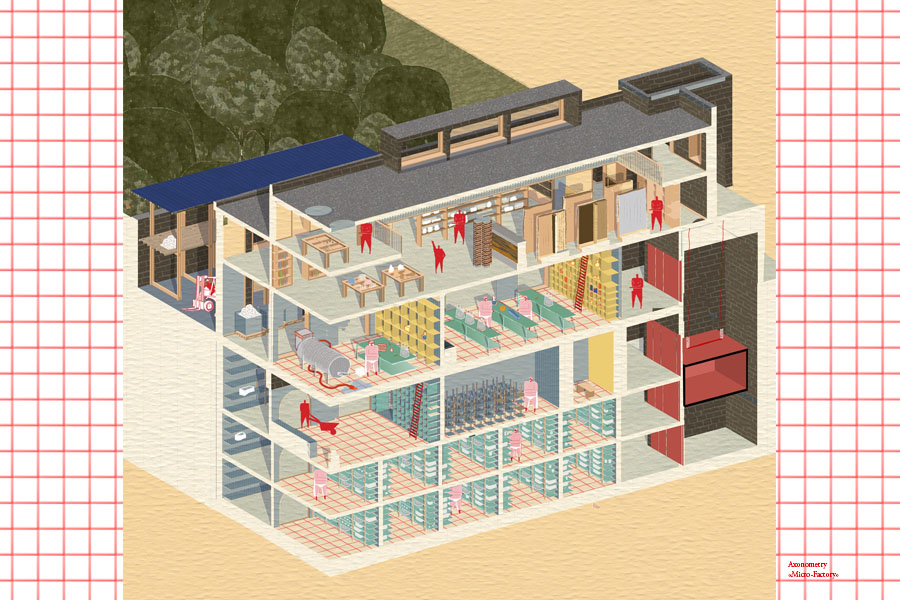 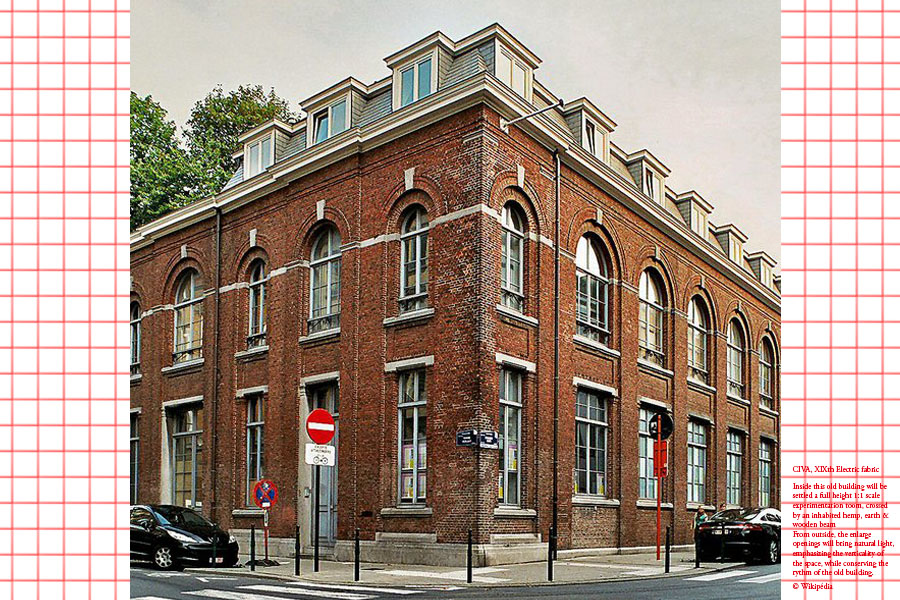 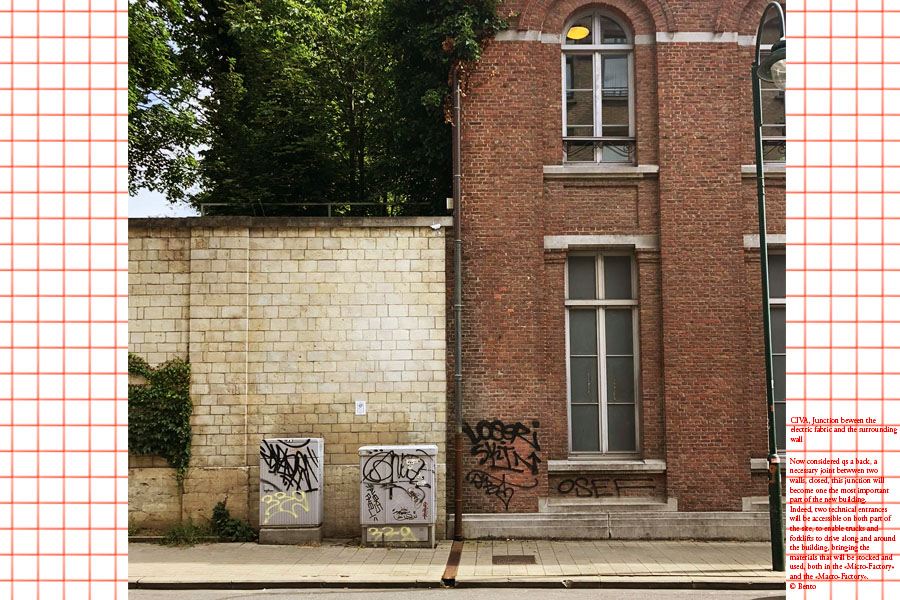 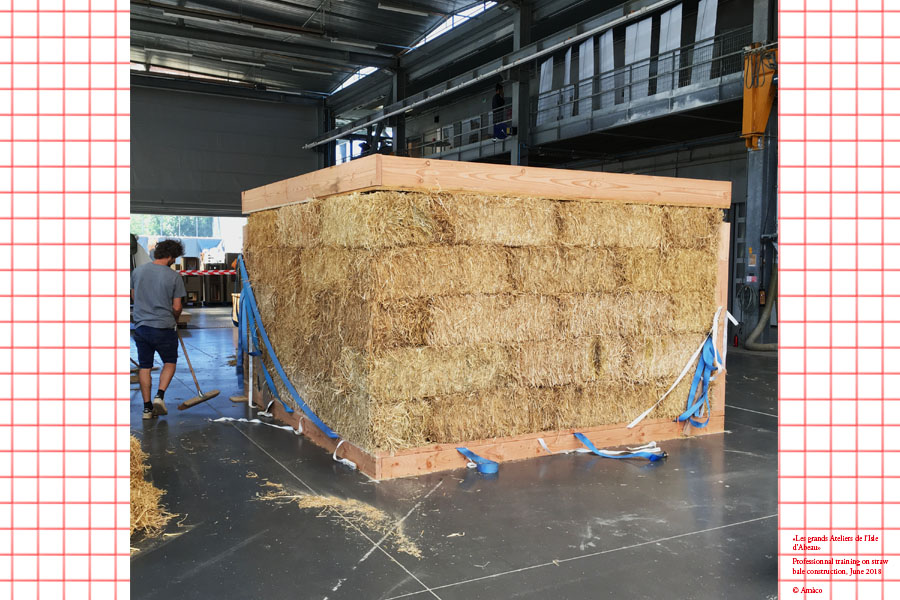 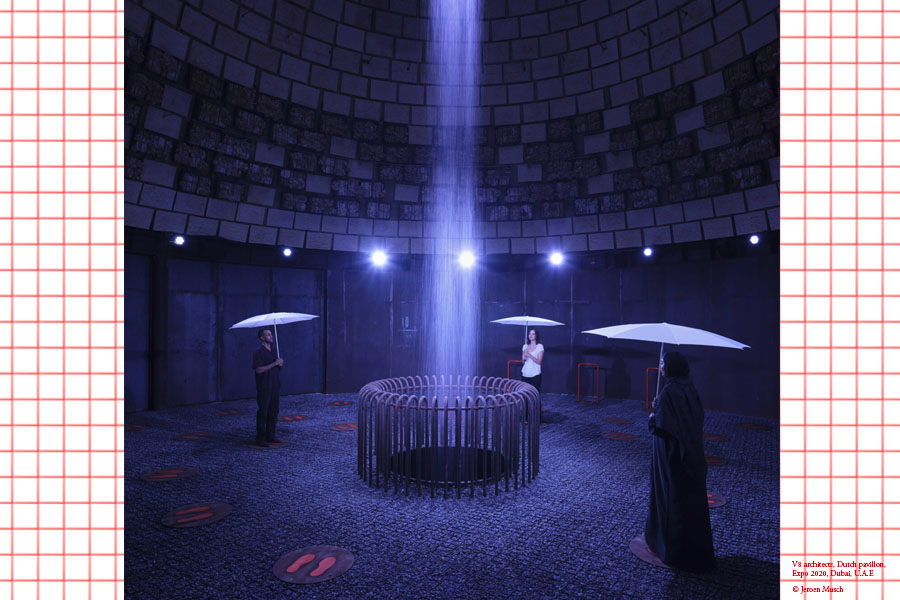 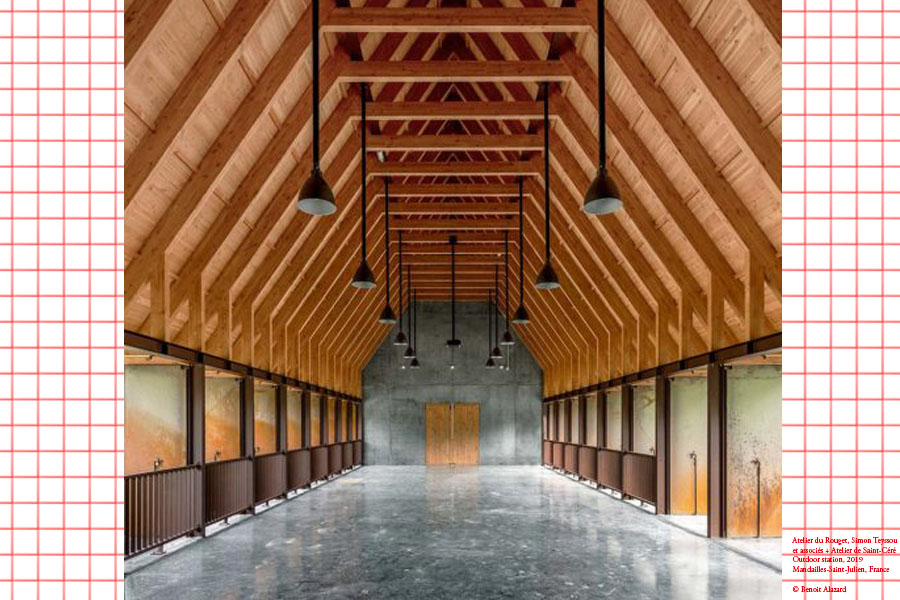 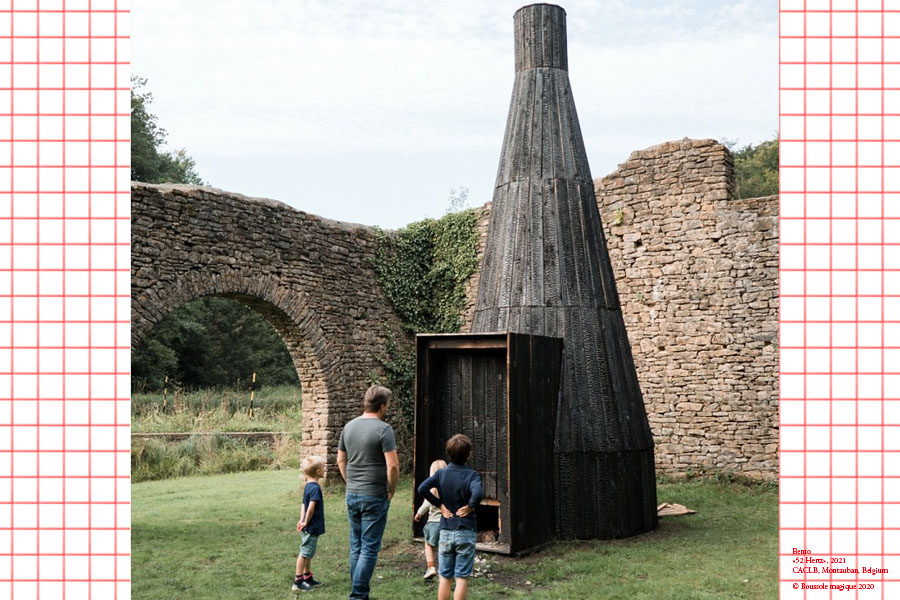 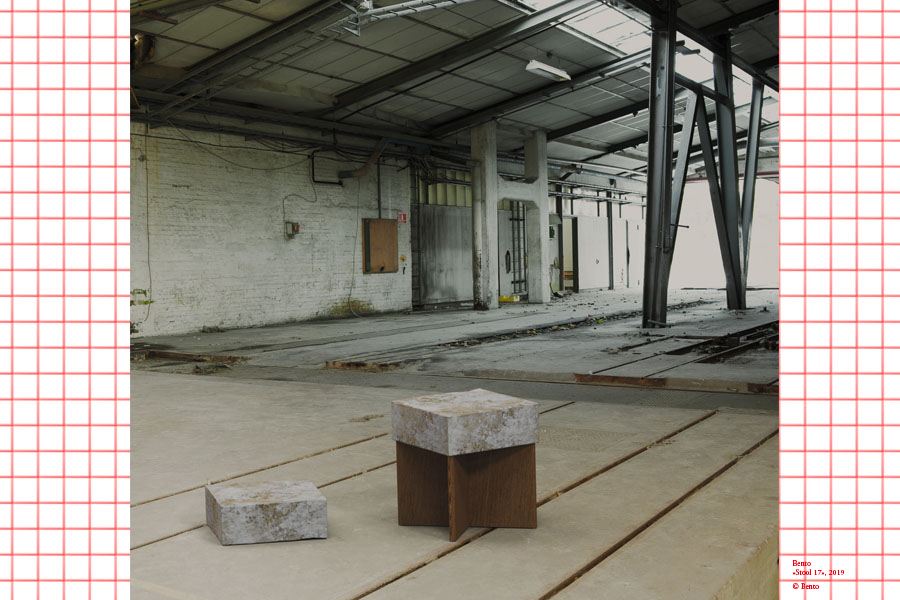