INTERVIEW
Click on the images to enlarge
1. How did you form the team for the competition?
Our team is composed of 4 architects and town planners, each engaged in different professional projects. We nevertheless share a strong interest in multi-scale territory projects and Europan was an opportunity for us to collaborate, to exchange our views to and build a project together, combining territorial and architectural considerations.

2. How do you define the main issue of your project, and how did you answer on this session main topic, Living cities?
Three ideas led our reflection, in the post-industrial urban context of Dorignies:
- Scales of intervention (spatial and temporal) and orientations of the project economy, to increase its frugality and sustainability
- Invitation to experiment citizen appropriation solutions, for an "inclusive metabolism" offering real opportunities for residents
- Search for the forms that metropolitan vitality can take in the context of a medium-sized city.
The E16 subject "Living cities", and more precisely on the Douaisis Agglo site: "a new social utopia", echoes the district's history, which is steeped in other utopias linked to its industrial past. Our answer was not to imagine a new form of utopia per se, but rather to recycle and reveal existing urban forms. Thus, a change of perspective on existing heritage becomes the starting point for dynamics to come. In this project, we bet on the ability of the inhabitants to co-construct, to “get their hands dirty” to bring out and carry out the various projects proposed. The utopia is also the ability of municipalities to re-invent scales of interdependence, with the aim of carrying out new forms of joint projects. The utopia is finally believing in the value of its heritage, as a reusable raw material.

3. How did the issues on metabolic and inclusive vitalities and the questions raised by the site mutation meet?
In our proposal, the existing infrastructures and superstructures, inherited from the mining era, are the support of new metabolic and inclusive vitalities. They make it possible to act simultaneously at the local level, by bringing together the various districts of Dorignies which are now isolated, and at the metropolitan level by stimulating the interaction of small towns along the canal and the railway. These collaborations make it possible to imagine:
- A new form of metropolisation, shared, and itinerant. On the banks of the canal, barges are becoming intercommunal and mobile public facilities. (media library, outdoor cinema, stage….) In the railway wasteland, wagons host association and the equipment necessary to bring public space to life. (Buvette, Stage, Sound system ...)
- A new art of building through local re-use, support for new socio-economic metabolisms. The 35,000 mining house renovations planned under the ERBM are sufficient to develop a re-use sector in the former halls of Pit 3 of the Escarpelle mines. The rehabilitation of the Delattre tower and the extension of the social center are pilot projects to experiment with this approach.
4. Have you treated this issue previously? What were the reference projects that inspired yours?
The metabolic vision of the city, as the way we seek to understand, respect and promote all the flows that animate a territory, human and non-human (materials, animals, energies, flora, vehicles, etc.) is not an approach that we usually meet in our respective professional paths. However, the advantage of this posture is to open up new spatial and temporal scales, and to identify the possibilities of interactions in aid of the quality of the project. From our point of view, this Europan session represents a reservoir of ideas and useful references for spreading this culture of the “living city” within the public authorities.
- Instant City, Archigram, 1969-1970 This theoretical project inspired our answer to the metropolitanization of medium-sized towns through the use of barges and wagons.
- Exhibition “Matière grise”, Encore Heureux Architectes, 2014 For their metabolic logic concerning materials which creates a new aesthetic in the art of building.
- Europa, head office of the European Council, Samyn and partners, Brussels, 2005-2016 This project inspired us for the facade of the Delattre tower in reused joinery.
- Rehabilitation of “la tour Bois”, Druot, Lacaton et Vassal architects, Paris, 2011 The architects forcefully demonstrate that "Demolition is not a prerequisite".
5. Urban-architectural projects like the ones in Europan can only be implemented together with the actors through a negotiated process and in time. How did you consider this issue in your project?
We suggest three way of relationships with the stakeholders :
- The snapshot ; do not wait. The use of barges and wagons makes it possible to quickly transform the territory, to test, to share, to discuss.
- Do it ; over time and over the years: allows the user to get involved in the project, to understand it well and to improve it considerably through feedback and daily practice,
- Foresight: daring to project oneself into futures that may seem worrying, but which make it possible to take winning trajectories for the future, at the right time. For example: the change of the Lille-Douai railway line will take place in the decades to come, thus, the question of crossing the railway line was thought out by anticipating the possibility of “breaking down the fences” thanks to a train- tram serving the string of small towns, and which would de facto make the investment of a footbridge unnecessary.
Spatially, we propose to go beyond administrative perimeters and free ourselves from territorial interdependencies that we believe are inevitable. It is then a question of cooperation around concrete and operative material data: How does a canal unite the inhabitants who live on its banks and redraw a metropolitan territory? How, in a context of a shortage of materials, can we collaborate and bring about new projects from the deposit represented by the built heritage of the mining basin?

6. Is it the first time you have been awarded a prize at Europan? How could this help you in your professional career?
Yes, this is a first participation for all team members. The Europan competition offers the opportunity to build a different approach to recurring issues in our professional practice. These reflections will undoubtedly feed our production. We hope that our project will be able to have an echo in Dorignies, but also in similar districts of the mining basin. 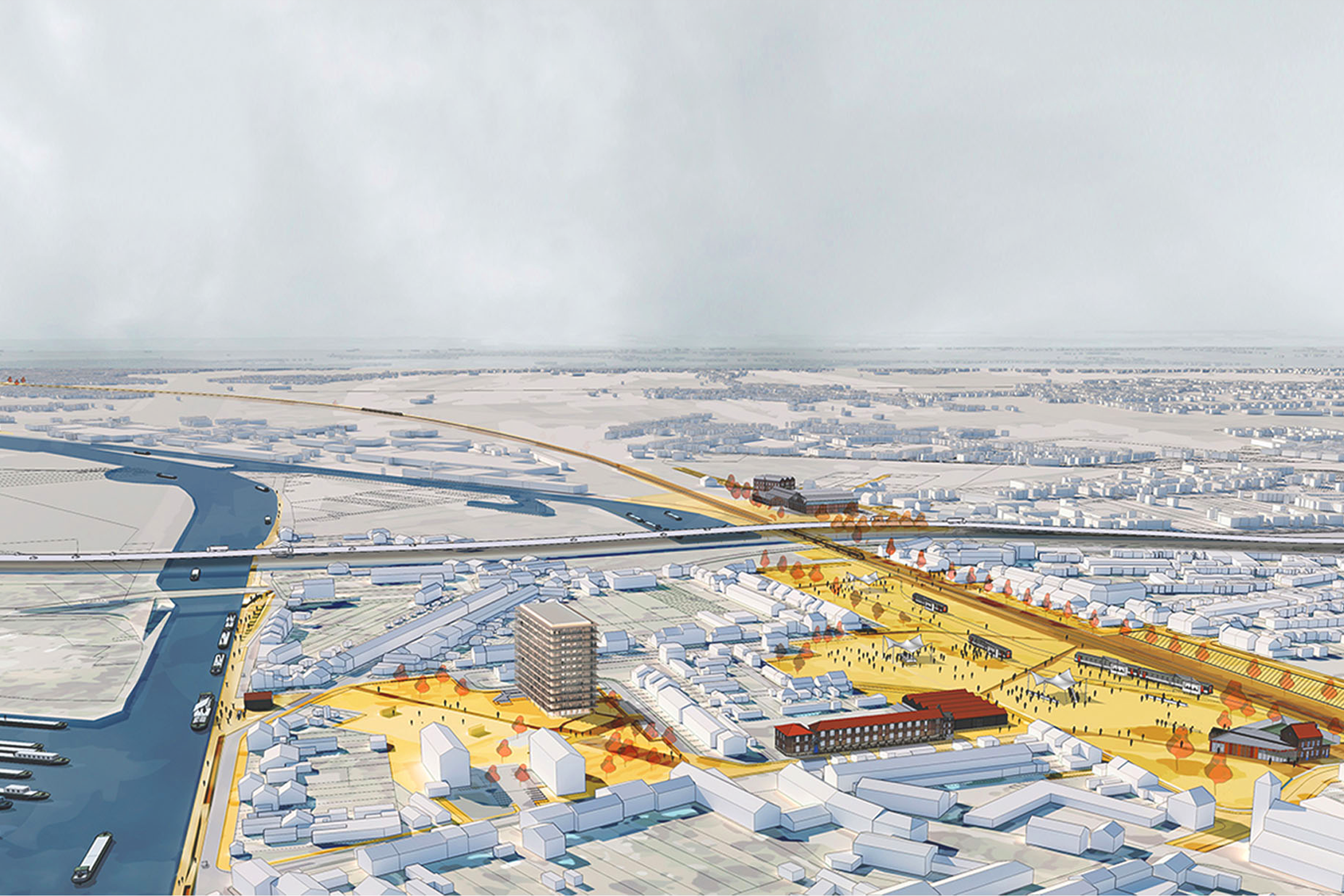 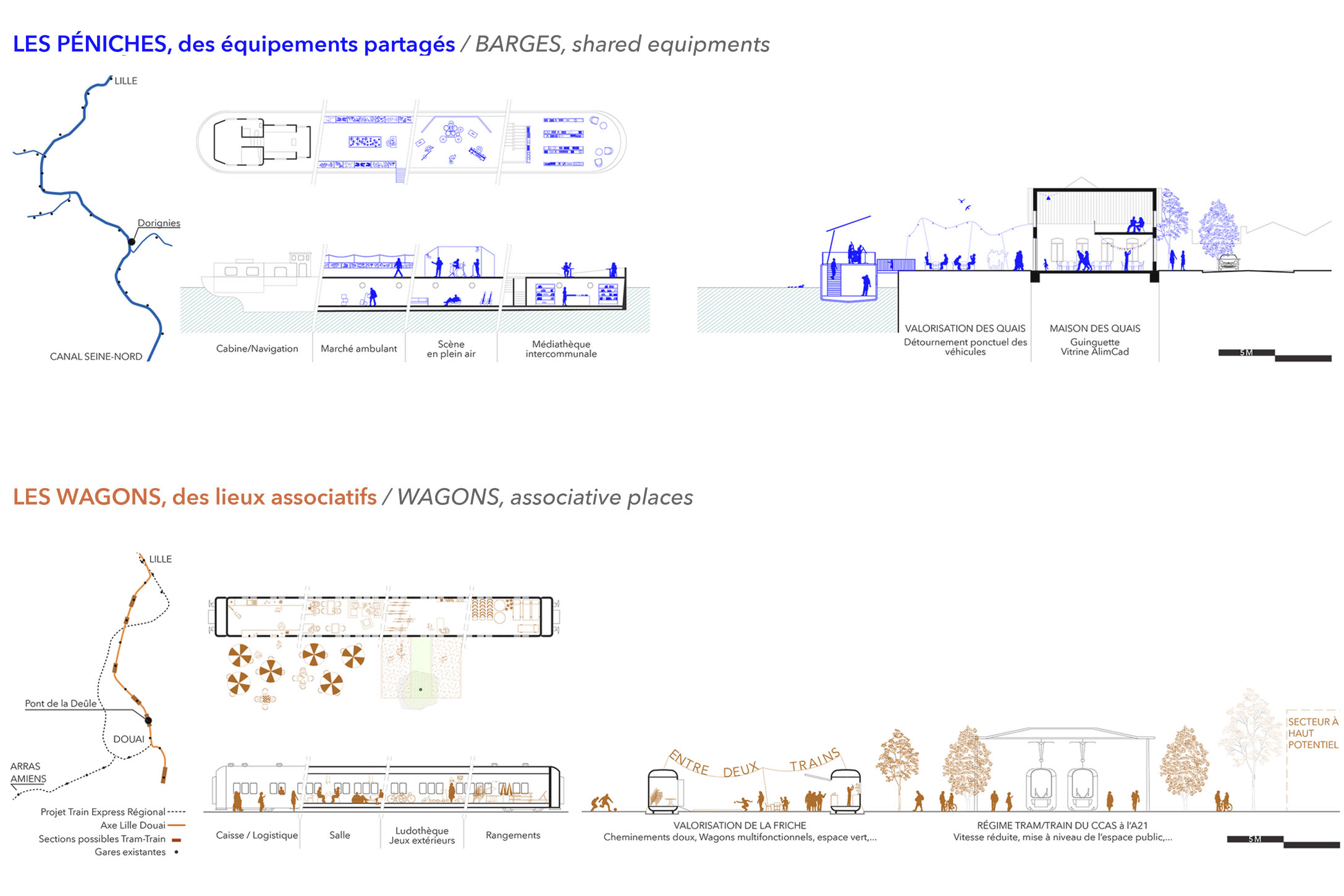 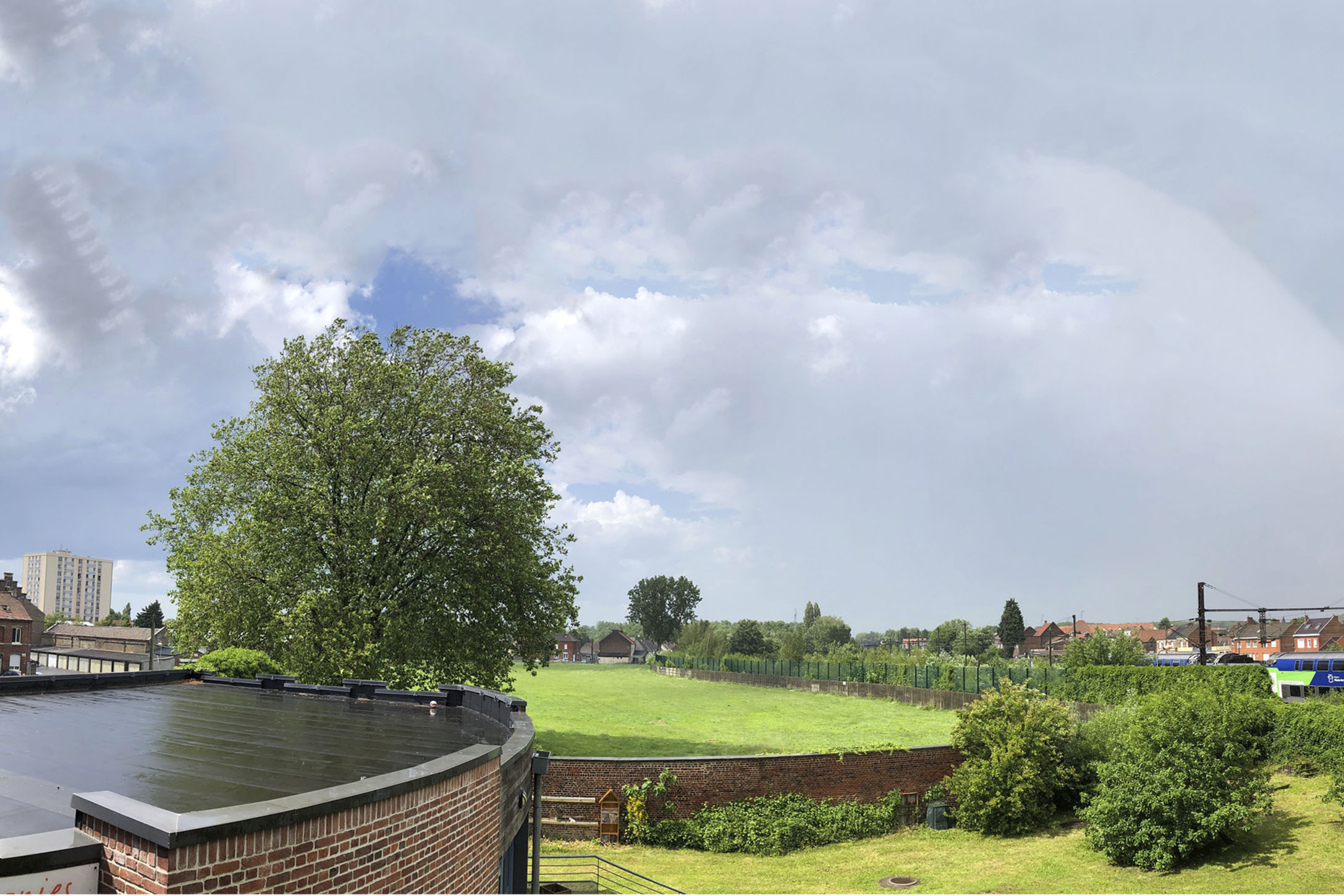 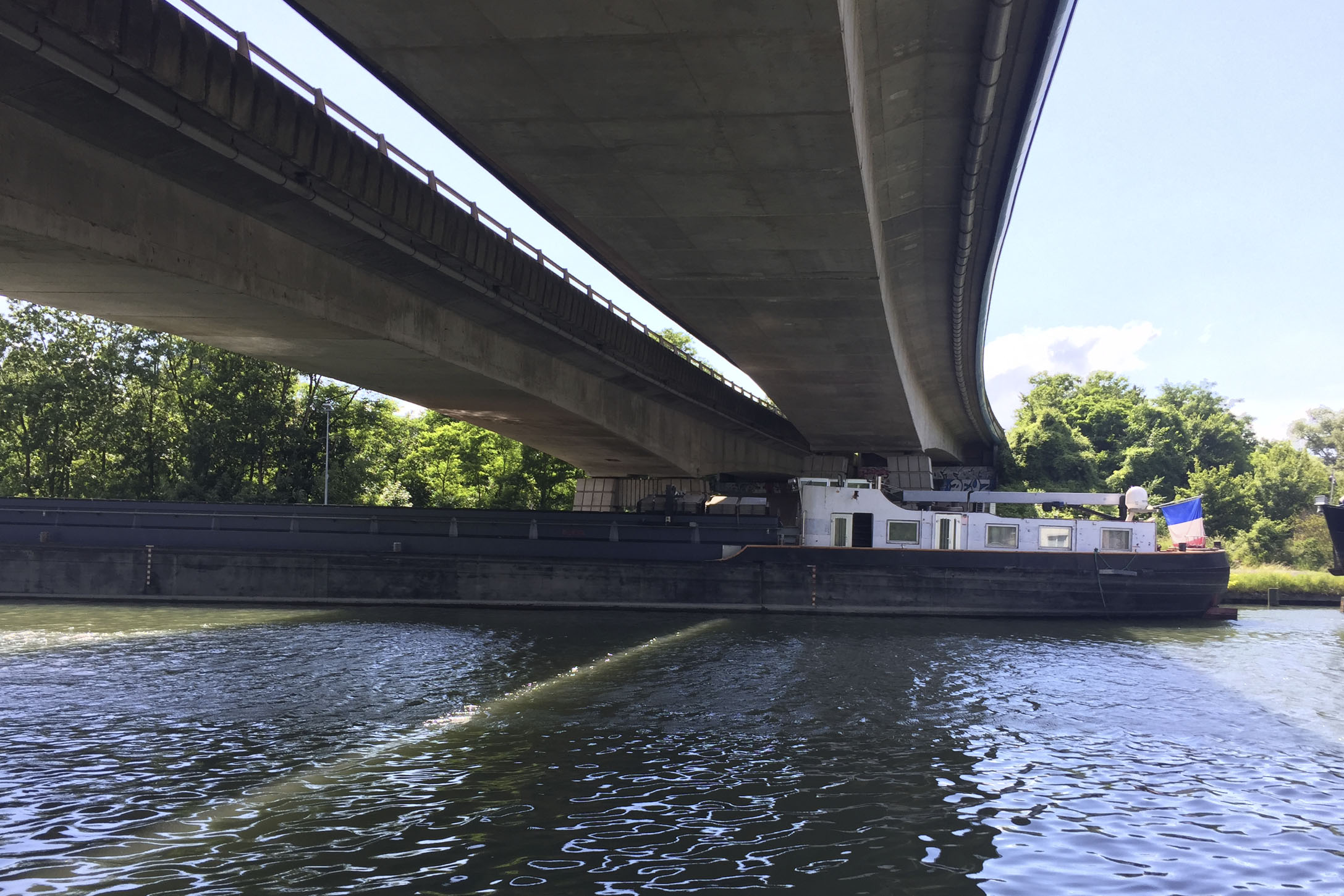 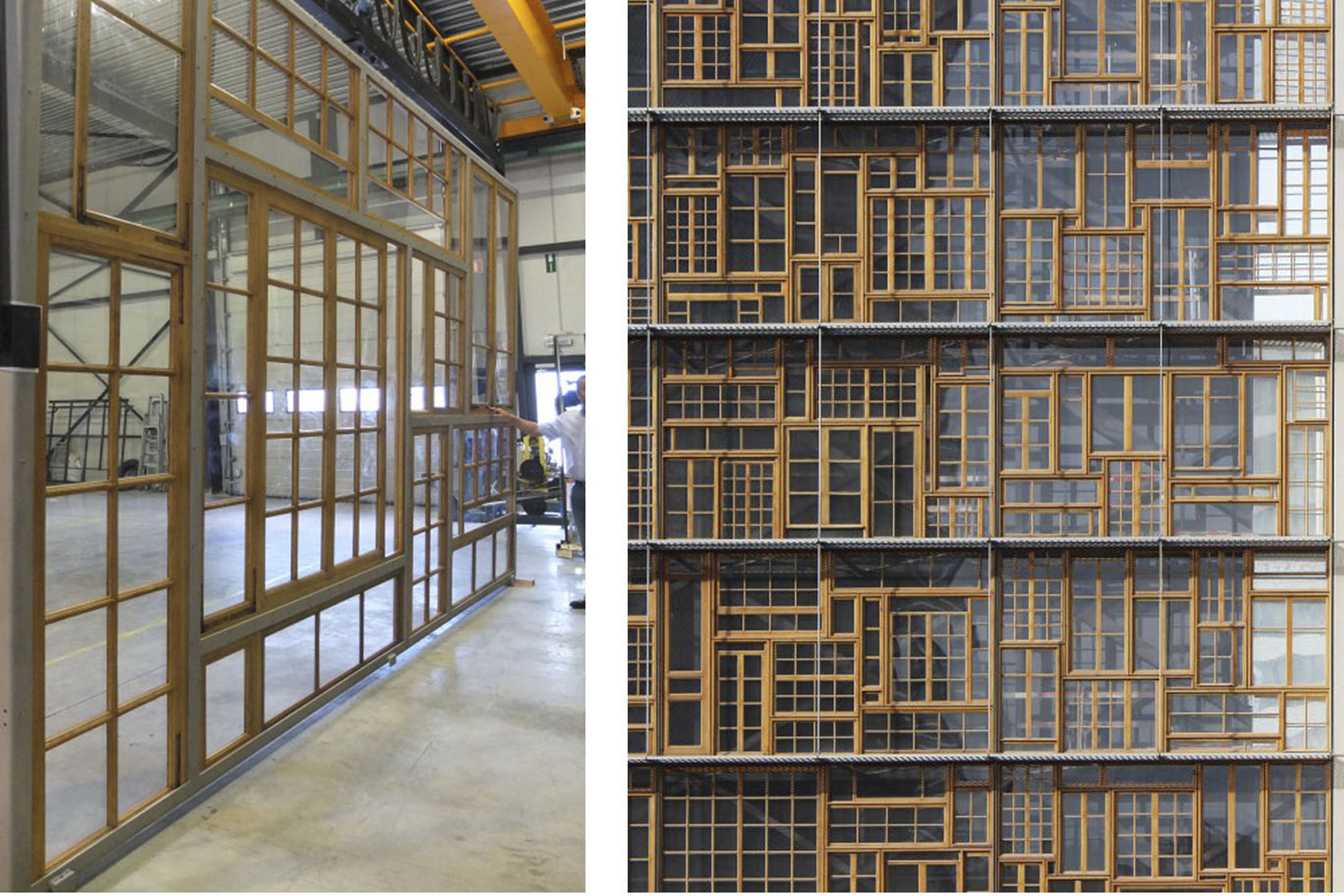