INTERVIEW
Click on the images to enlarge
1. How did you form the team for the competition?
The competition was an opportunity to work together in an open group made up of most people who have known each other for several years and collaborate regularly or occasionally in Geneva. Consisting of seven young professionals, our team shares a common vision on how to imagine the city while making these complementary and multidisciplinary skills an asset. The motivation of each member of the team has been a great strength in proposing our project in a territory that we know very well.

2. How do you define the main issue of your project, and how did you answer on this session main topic, Living cities?
Neighbouring the Bout-du-Monde district, the Fontenette district suffers from being a peripheral district with occasional uses or that one only passes through. The "Gold line" project redevelops underused spaces and offers the opportunity to live and experience the Fontenette district and the banks of the Arve in a new way. We imagine the living city as a revitalization of the territory by relying on the landscape and the Arve riverbank, by reconnecting the different districts and by programming new activities. Through urban planning, landscape and architecture, small and large interventions create a coherent whole, creating a destination beyond the district. By giving this place a new character and a new identity, "Gold line" seeks to highlight the living potential of this site. We see this project as the beginning of a discussion, a proposal that can enrich a vision for Fontenette and for the municipality of Carouge.

3. How did the issues on metabolic and inclusive vitalities and the questions raised by the site mutation meet?
The Fontenette site offers great potential in terms of biodiversity. By exploiting this quality and creating new social spaces close to nature and accessible to all, metabolic and inclusive vitalities are intertwined. The Arve River functions as the backbone of the project on which we have sought to connect the existing and new activities of the district. Reflecting on the three other themes to be dealt with: enhancing nature, giving an identity and decompartmentalising the site also allows us to imagine a lively and inclusive neighbourhood that goes beyond the city-nature opposition to propose a new way of living. In particular, it is thanks to the road requalification that the Fontenette district is being decompartmentalised and allows the creation of a new urban project.
4. Have you treated this issue previously? What were the reference projects that inspired yours?
In our professional practice, we are more and more regularly confronted with these questions, which force us to think of our projects through the transversality of approaches to respond to climatic, social, and urban issues. During competitions or mandates, we have already tackled these issues in individual ways, but working at this neighborhood scale with a complete program that combines landscape, urban planning and architecture is for us a first opportunity to imagine a coherent project with real freedom. We are committed to designing our projects with an emphasis on nature, biodiversity, history, uses, soft mobility and promoting the creation of inclusive public spaces accessible to all. The site itself, the observation of the present and the discovery of its history have been our main sources of inspiration to imagine this project. Period paintings showing children having fun on the beaches of the Arve or Orpailleurs were very inspiring. The bridge made by Aurelio Galfetti, Flora Ruchat-Roncati and Ivo Trümpy over the Bellinzona baths also inspired the gesture of connection between Pinchat and Champel. The renaturation project on the island of Vers-Vaux in Geneva was also a source of inspiration regarding the different issues of renaturation and flooding.
5. Urban-architectural projects like the ones in Europan can only be implemented together with the actors through a negotiated process and in time. How did you consider this issue in your project?
Our proposals have been thought out to be able to be integrated into a phasing with different temporalities allowing light modifications to be carried out (mobility, pavilions, public spaces...) and others which require greater negotiations to be carried out (passage of the Arve, requalification of the car office...). The different timeframes can also be a way to take the time to convince and test temporary uses while allowing the population to adhere to the project. We are aware that a project of this magnitude requires continuous monitoring, multiple expertise and numerous exchanges with the various public institutions and private owners to accompany the realization of the projects described in a master plan. The fact that we are already professionally active on these issues in Geneva is also an asset to facilitate these discussions and the implementation of the project.

6. Is it the first time you have been awarded a prize at Europan? How could this help you in your professional career?
Yes, this is the first time we have won an award at Europan and it is also our first participation. We are very happy about this success and the visibility it will bring to all our team members.

Is your team multidisciplinary? If yes, what are the disciplines and why did you include them to your project?
The constitution of a multidisciplinary team is for us a condition for participation in the EUROPAN competition. Our disciplines bring together all the elements to create this living city.
• Geography and urbanism
Geography and urban planning allowed us to compose the project through the prism of the territorial context and identity of the site while promoting a sensitive narrative to better imagine the future district. The development of a program as a guiding thread accompanies the project in both large and small scale. Urban planning synthesizes each discipline and seeks to reinforce territorial dynamics. In terms of mobility, programming and by proposing new relationships with natural spaces and public spaces, the city must be thought of as a whole by relying on each skill to make a project feasible and sustainable.
• Landscape architecture and environment
To be able to imagine a living city thanks to its metabolic vitality, landscape architecture has enabled us to highlight the structuring nature of the site by thinking first of the spaces of nature and then of the built spaces according to their impacts on the environment. Sometimes, human uses must be delayed if we want to favour biodiversity threatened by climate change and land pressure.
• Architecture and patrimony
Architecture has enabled us to take a harmonious and technical look at the various built spaces on the site in order to preserve, rethink and propose new ones in strategic locations with appropriate positioning. The role of architecture is to preserve the history of a place and to create new ones, through large-scale interventions for the creation of the environment center and the requalification of the car office, or even smaller ones through the installation of pavilions along the Arve. An architecture that fits into the landscape, allowing people to live in this area in all seasons.
• Tactical urban planning and citizen participation
We imagine designing the city for everyone. To create this inclusive and vibrant city, we want to place the future users and the various partners around a common program and collective actions. Good project support and a consultation process are necessary to create this metabolic vitality and to be as close as possible to the needs and expectations of all.

Has your team, together or separately, already conceived or implemented some projects and/or won any competition? if yes, which ones?
We all attended training courses where we had to design projects that responded to specific themes. Some team members are familiar with architecture and urban planning competitions and have already won them. For others, Europan was their first experience in an official competition. One of the team members realised the redevelopment of the Céligny beach. The project re-imagines the uses of this space in a more contemporary way. Access has been made easier for people with reduced mobility, an ecopoint has been installed, and the charcoal grill has been replaced by an electric plancha. The paving stones were retained and adapted. The project has incorporated areas of fine stabilised paving to ensure that the footpaths and the project are soft. The large iconic trees have been retained and a tree has been planted to frame the boat ramp. The perennial plantings on the bottom, against the parcel boundaries have been selected to thrive in sunlight and these create a neighbourhood privacy to welcome back users. In 2021, two of the team members also conceived, organised and led a participatory process in the context of the redevelopment project of the Place de Carantec in Grand-Saconnex. During three workshops, the participants were able to reflect and position themselves around themes of public spaces and the programming of the ground floors of the future buildings. MDT Architects members have handled multiple projects on various scales in the French-speaking part of Switzerland. From the elevation of an apartment building involving care for the elderly to the design of semi-detached villas, these different projects have allowed the team to develop an openness and critical eye on the current issues related to densification and urban development. For example, housing for the elderly in the city centre implied several problematics such as therapeutic care centre in a residential area and the densification of the city's immediate periphery. Regarding the Onex-located project, it allowed a collective housing of 17 flats to be built with a very high energy performance, in the middle of a park full of trees. The building now offers quality housing in a beautiful green setting and preserved nature, while being close to the city centre.
Does your team share a common workplace? if yes, give us a short description:
Our various meetings took place in the common room of a Geneva cooperative in the centre of Geneva. 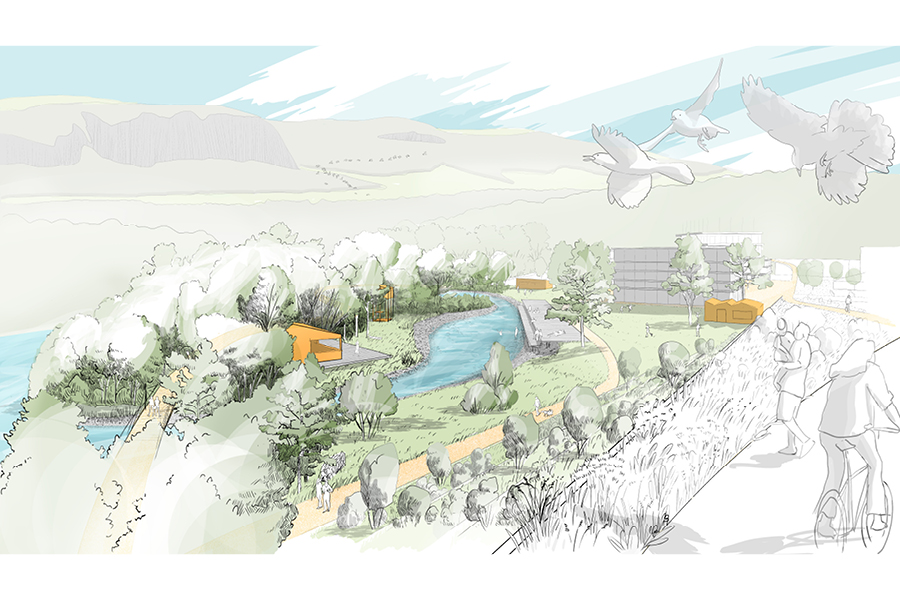 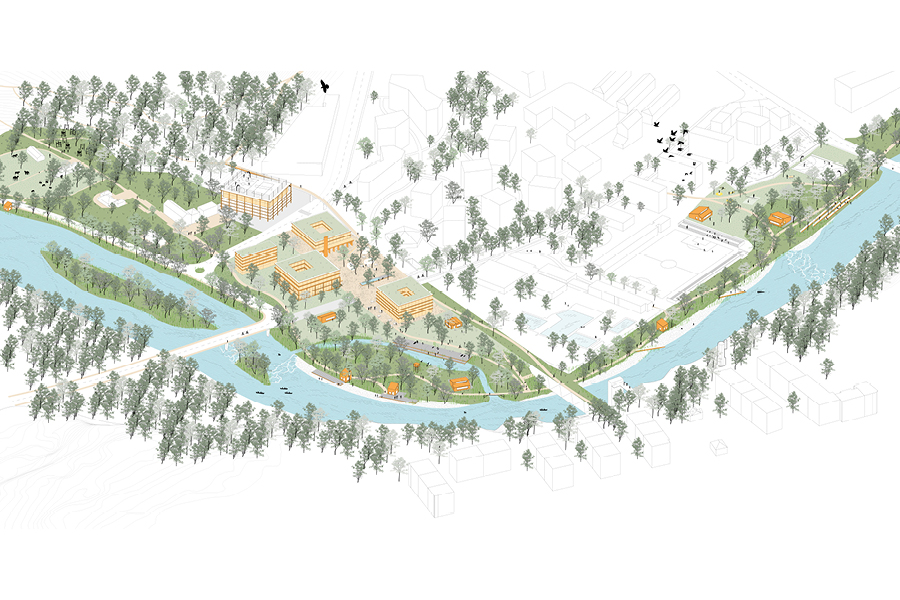 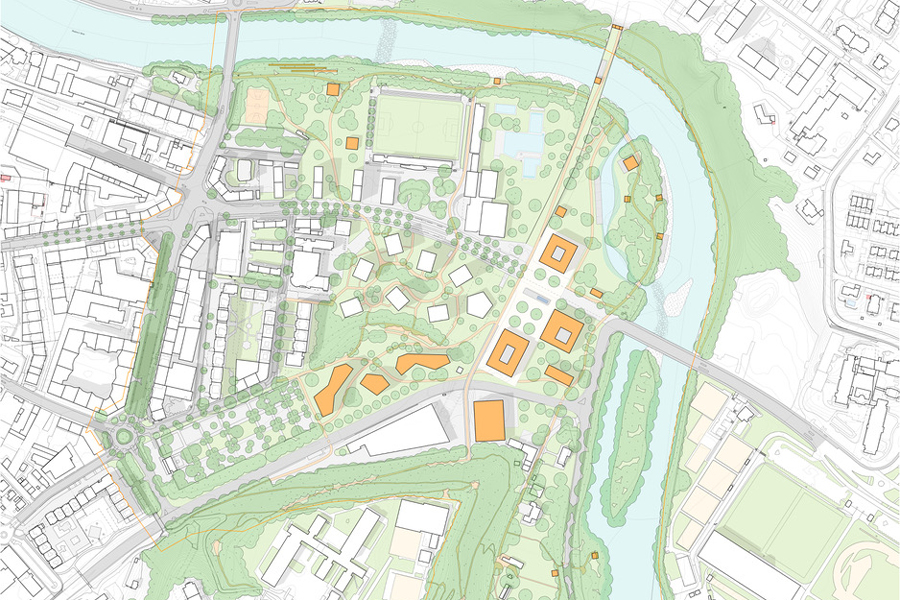 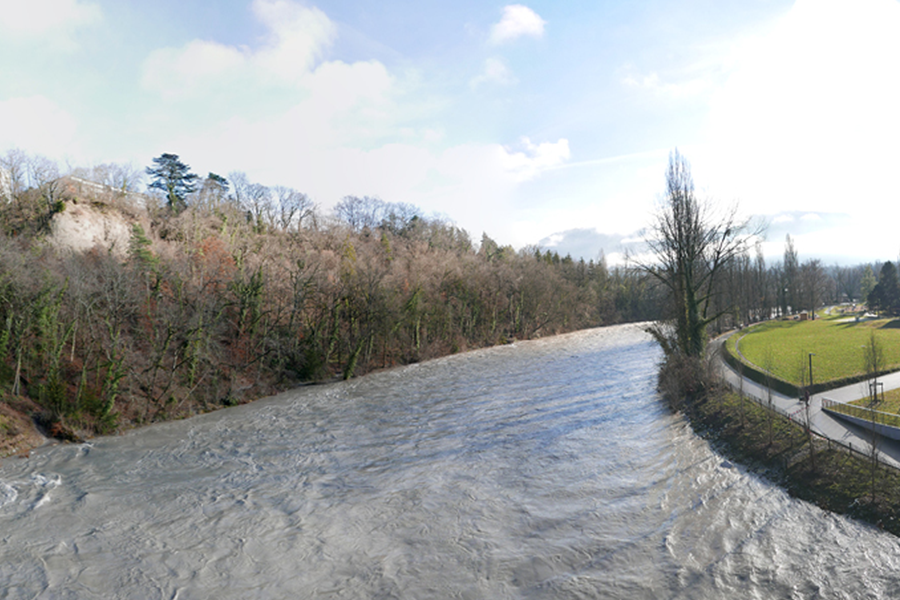 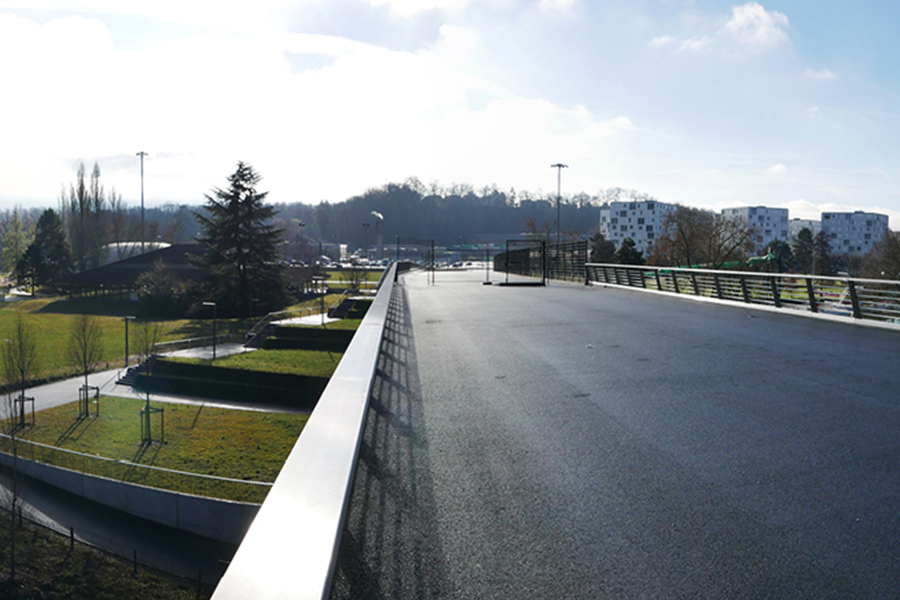 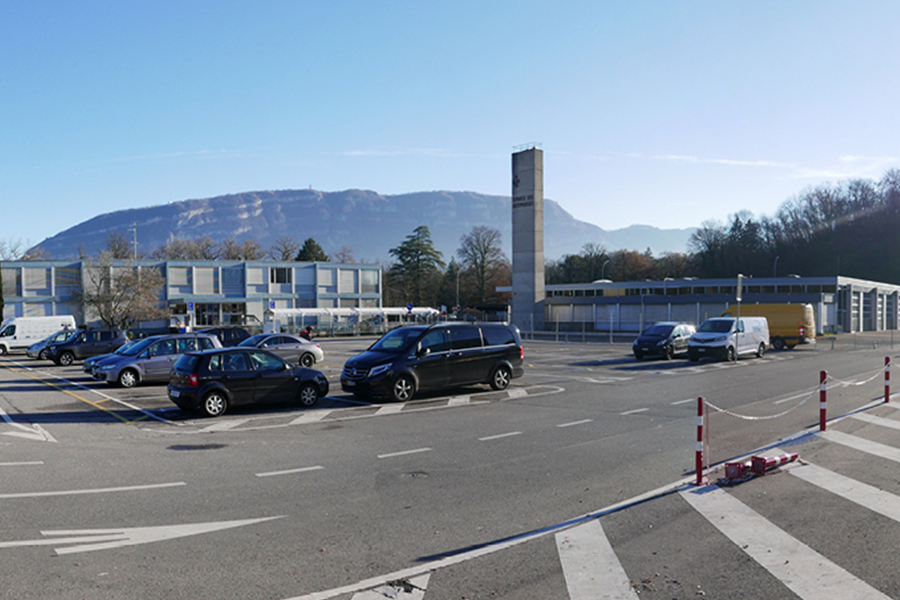 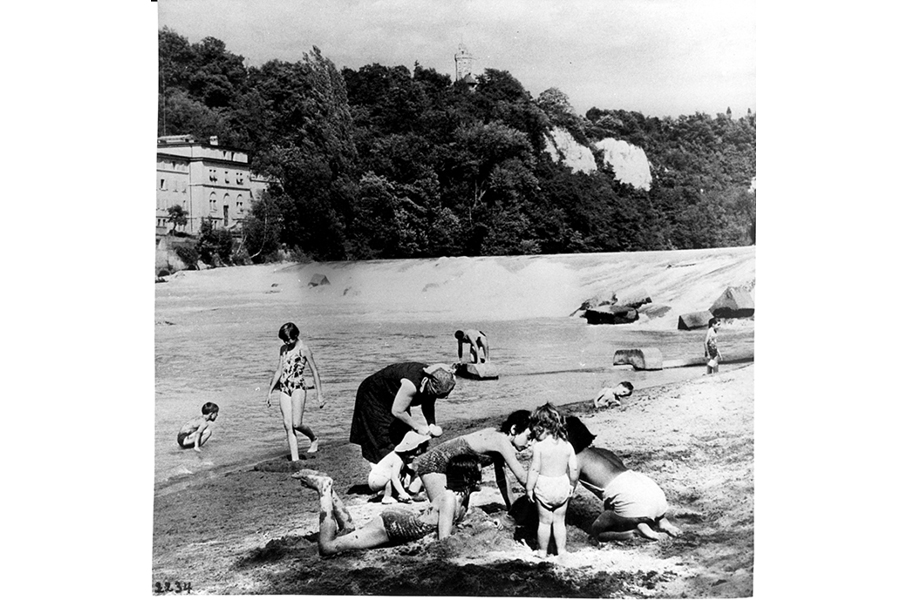 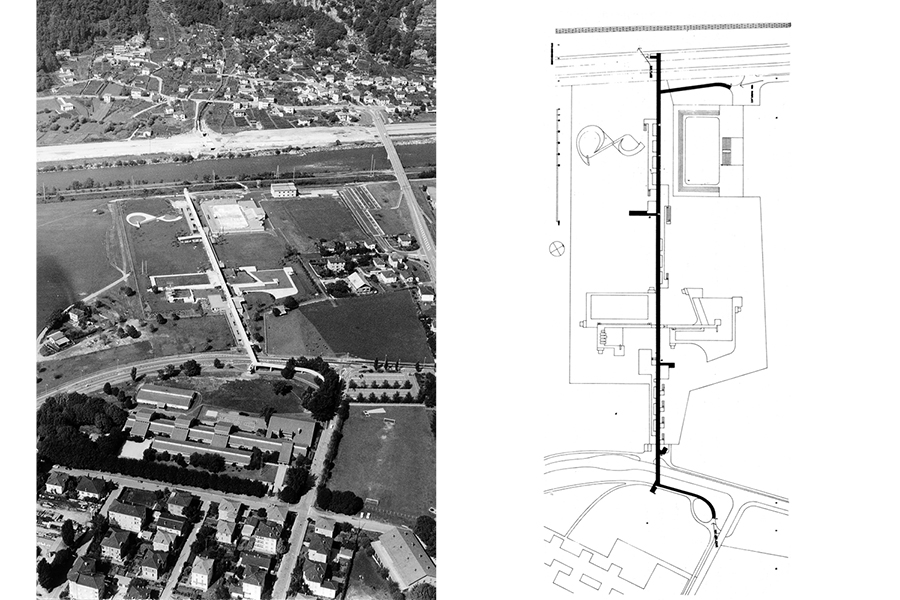 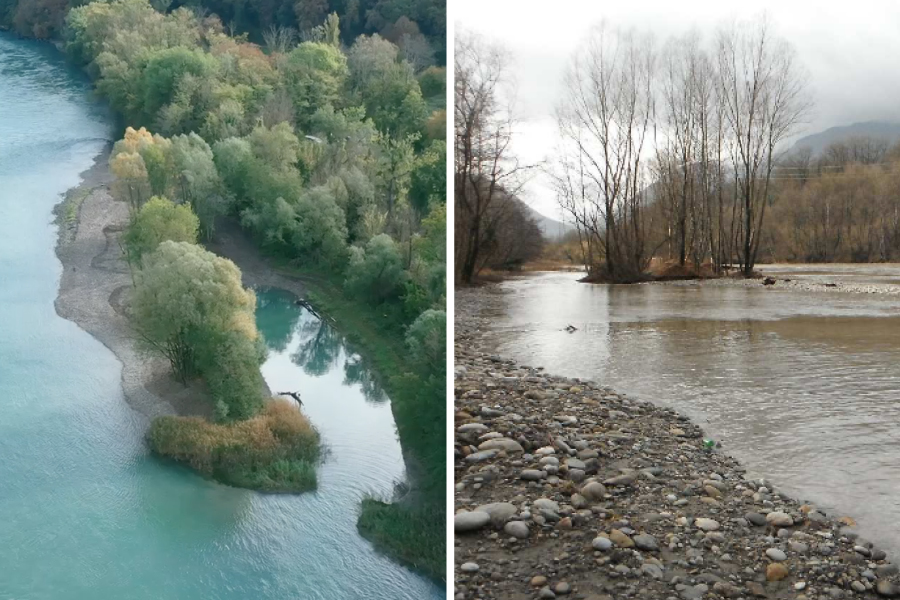 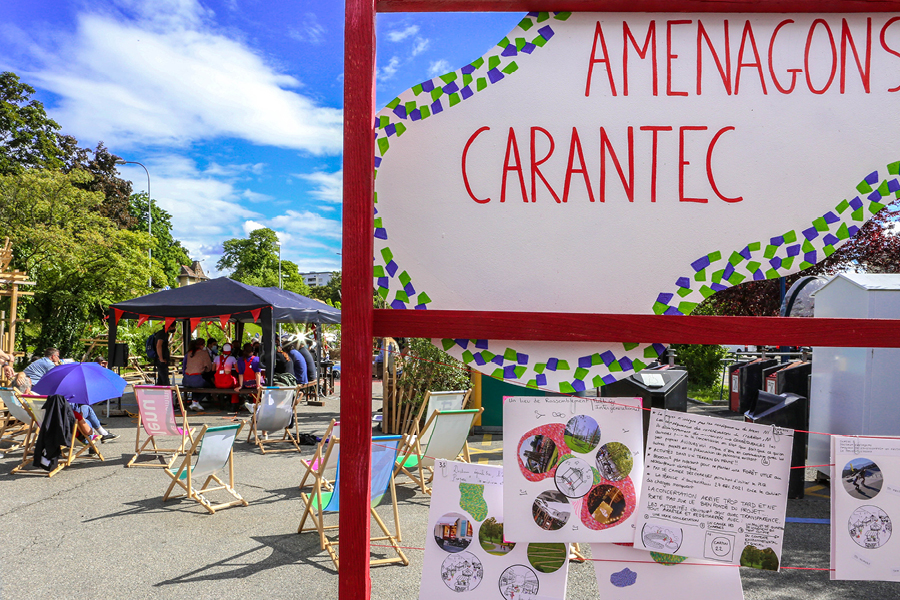 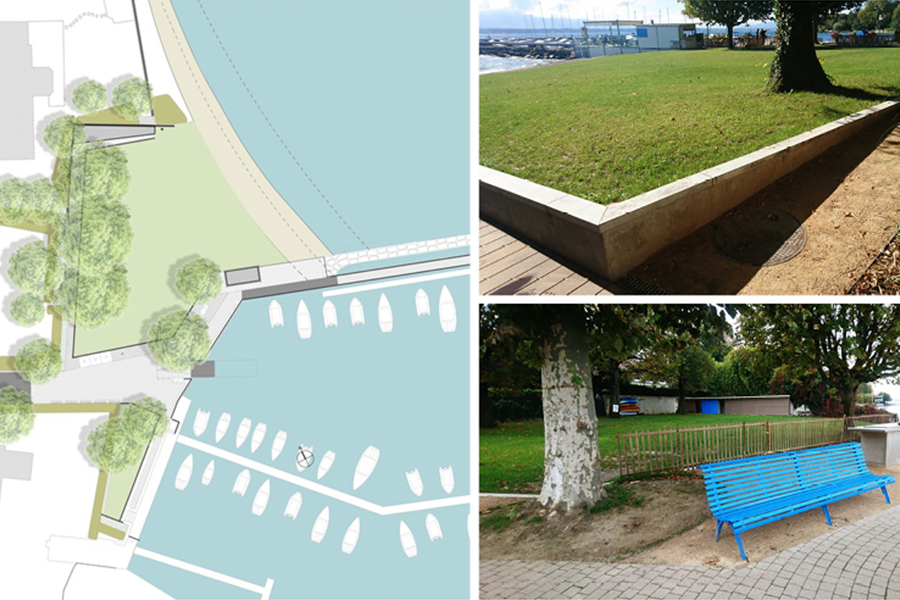