Food Production is an essential issue for the city in a context where circularity, durability, mobility and economic challenges concentrate the main focus. This site is located between Neerpede, a mostly agricultural and peri-urban area, the South-West region of Brussels and metro station COOVI/CERIA, representing an entry point to the urban context of the Belgian capital.
There are various objectives:
- considering the site of Neerpede, and especially the site of La Ferme du Chaudron (Cauldron’s Farm), as a wide food market supposed to “feed” the city,
- considering and rethinking the landscape of the farm and its agricultural surroundings,
- considering mobility in the site of Neerpede and mobility towards the city, while dealing with the metro station COOVI/CERIA as a turning point between this area with landscape issues dedicated to food production and the city and its consumers.

Several questions are raised in this zone:
1- What type of landscape project can integrate the fields located near the Cauldron’s Farm?
2- What mobility solutions could be designed to integrate this peri-urban area to the city?
3- What architectural project could be conceived for the Cauldon’s Farm, which is dedicated to be transformed into a wide food market for Brussels’ inhabitants?
4- How to think the peri-urban area of the metro station COOVI/CERIA and its surroundings as an entry point for food production to the city?

FOODSCAPE raised the question of the future relationship between agricultural productive areas and urban space.
The proposed site is located in the South-West of the Brussels region, at the edge of mainly agricultural semi-urban areas and large commercial and research complexes along the ring road. This creates land-use conflicts, urban sprawl VS productive landscape, accessibility vs. preservation.
The aim was to negotiate these problems, to find ways for a respectful use of existing resources, the opportunities for new mobilities and a fair and equal policy to manage the process. Paraphrasing Thomas Sieverts, it was about the activation of ZwischenLand, in order to keep agricultural production close to the heart of the city and in the hearts of the citizens, both literal and metaphorical. 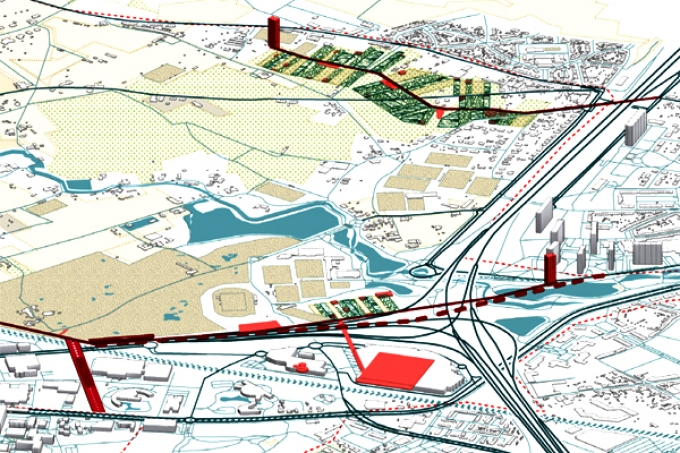 Linking Promenade creates an active border between the city and the landscape, strengthening and reinforcing the limit by means of a connective boundary. Taking other natural limits such as a boardwalk at the seaside as a model, it redefines a third space that physically separates inside and outside, clearly preserving the open land from the city’s extension. A number of plug-ins connect and irrigate both territories, they range from a simple greenhouse café to complex circular systems as an aquaponic plant that serve as access points both to the urban as to the more rural areas. 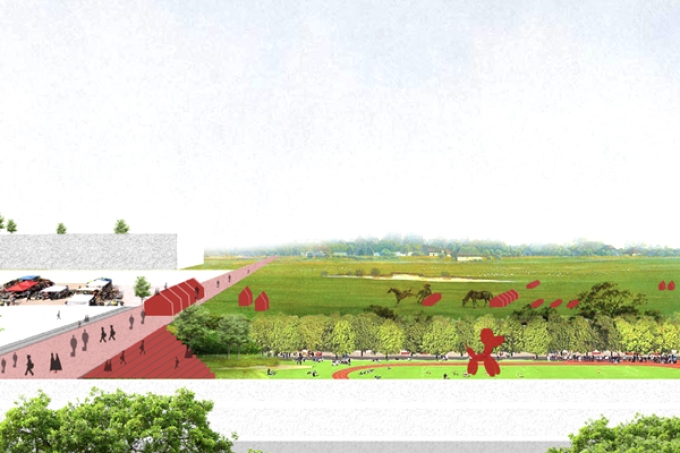