Team Point of view
For a city, adaptability is the ability to provide opportunities for different temporal and spatial uses, without causing instability. Those opportunities are defined by three dimensions that essentially guide usage: urban and architectural form, property rules and plot pattern. The proposed thin plot weft is an adjustable object that is easy for all stakeholders to appropriate. A system of mid-length leases fits into this weft, allowing flexibility of use while guaranteeing stability for occupants. Finally, the light architecture provides a low-cost structure that can be easily and quickly converted.

Jury Point of view
The project analysis explores the question of ownership. Societal changes and the crisis make it essential to adopt adaptable construction systems. The architecture developed here is not frozen, but is always adaptable to requirements and to change. The facility has a mixed aerial architecture and its roof is accessible to the public. The jury found the proposals on land and land management through leases very interesting.

2014-2015
Marseille Rénovation Urbaine entrusted both prize-winning teams to make an urban study in order to redefine the site’s programation, the feasibility of the project and make proposals for a new qualitative urban and architectural logic.
A series of 3 workshops of 2-3 days took place over 6 months, in situ. Local actors (city, associations, lessors) and inhabitants were invited to work, discuss and ask questions etc.
The original proposals made on the urban fabric, the horizontal density, the public spaces genealogy and the publicization of the view were kept in the project.

2020-...
In February 2020, the social landlord Erilia and the Aix-Marseille-Provence Metropolis, launched a call for expressions of interest (AMI) relating to the development of an affordable and sustainable housing offer to complete the urban renewal of the Plan d'Aou district. The project was won by the Méridien consortium made up of Demathieu Bard Immobilier as promoter-agent, Ekinov as co-promoter and the office of architecture Concorde with their proposal for a hamlet of Mediterranean spirit, conducive to the development of social ties while preserving the serenity of its inhabitants. The accommodations, designed according to the needs of their owners and each equiped with a private outdoor space, garden or terrace, will offer a great comfort of life, for the well-being of each.
In February 2021 begins a study phase of 6 to 9 months intended to jointly design the project. The objective is to produce comfortable, sustainable and affordable housing, using an efficient approach aimed at controlling the overall cost and the rest to live, while respecting economic, social and environmental issues. The project management will be based on the principles of working in collaborative mode and taking into account uses with the Design Thinking method. The Méridien consortium will build two-thirds of the planned housing on the “Carré Sud” plot. The last third, being built under the supervision of Erilia.

2016-2021
Erilia, actor of the renovation project, gave the project management to the French team Concorde for the development plan of transitory public spaces (5 to 10 years) and the prefiguration of future public spaces.
On the site scale (10 000 sqm), the temporary project consisted of a small equipment inserted in a reworked landscape, with a density of uses creating a critical mass planification, defined by a surfacing ground mixing painted and pierced parts, as well as by a fence giving visibility and identity. Intended for sports, this space also became a playground: a wall is both a goal, a target, a shadow provider and a field for boules with benches. The use must define the destination of the planification, and the latter must welcome the children and teenagers’ imagination.
On a site scale and on a long-term timeframe: boules, basketball, sculpture games. Noble material, sustainable and cheap creating a unified and qualitative vocabulary in shape of 210cm x 45cm x 50cm blocks, the stone is used to create different layouts: benches, borders, walls, fences.
The construction work started in 2019 with the first phase (recreational park - competed) then with the second phase (blue moon and the belvedere) completed in 2021. 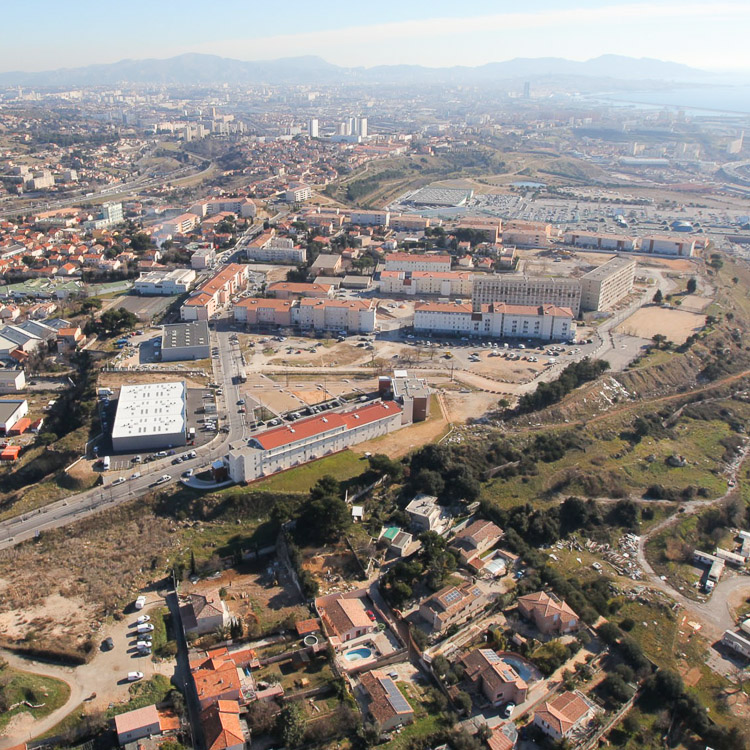 The project is putting forward shared spaces rather than public spaces with intimate and private dimension. These spaces are presented as voids, enhancing the coherence of the urban structure capable of leaving time for appropriations to come.

The entire ground coverage of the site is divided in a very thin and orthogonal grid comprised of 5x5 meters plots offering great flexibility and an innovative property model where many different and modest typologies can evolve progressively throughout time. 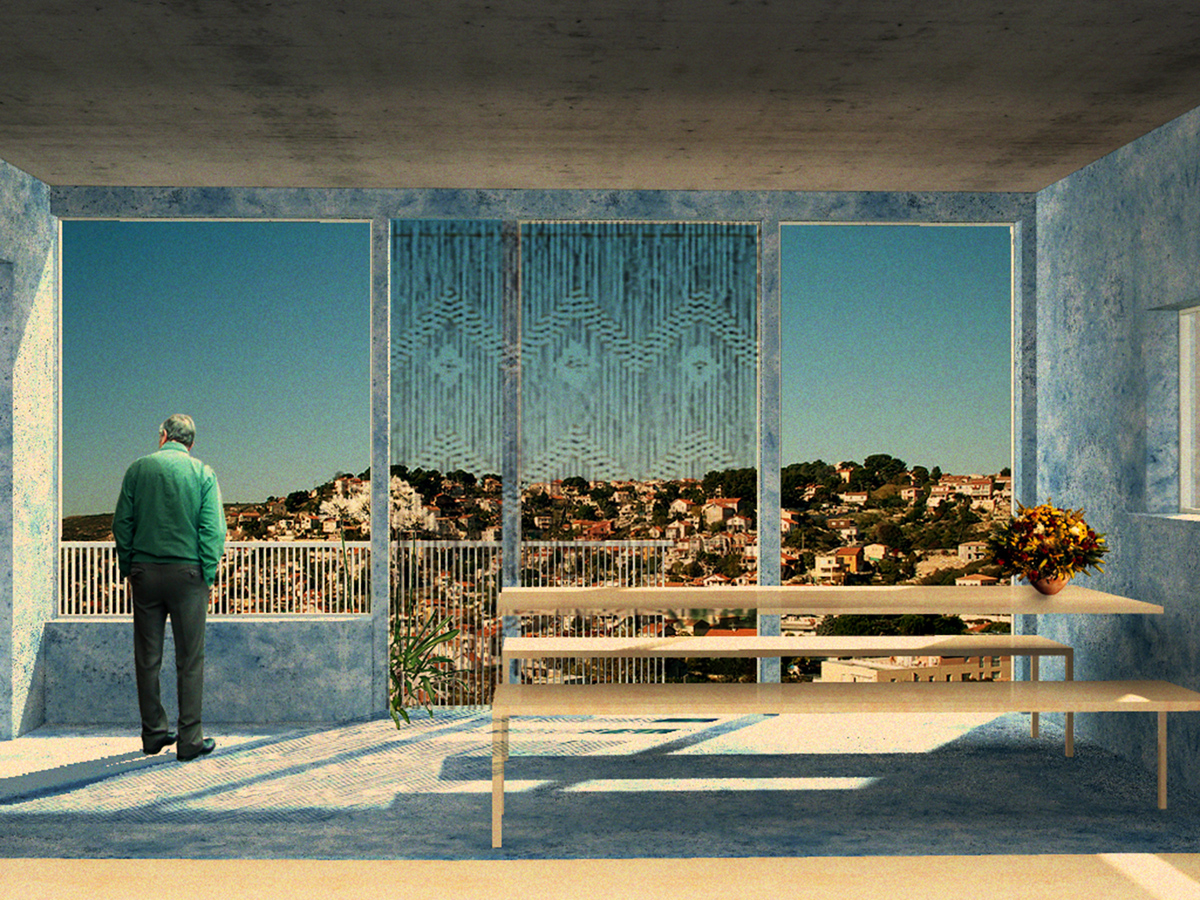 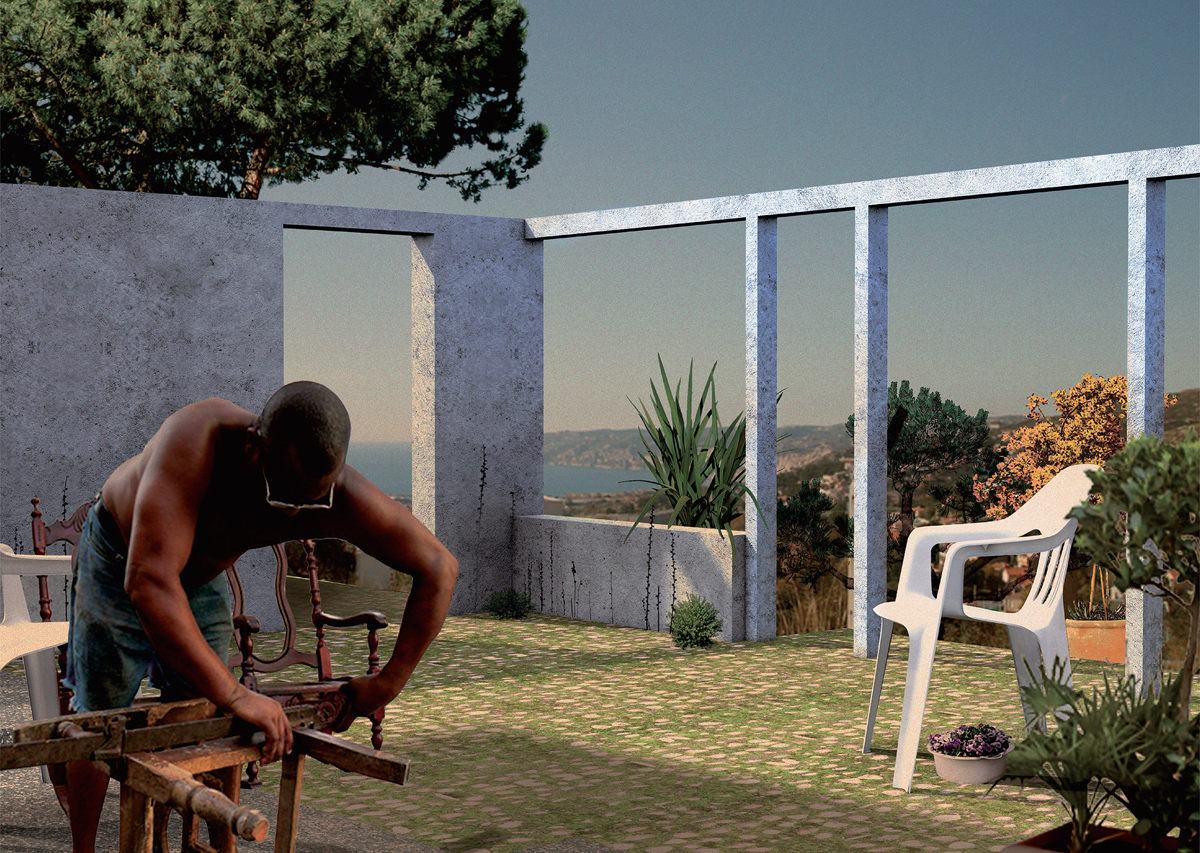 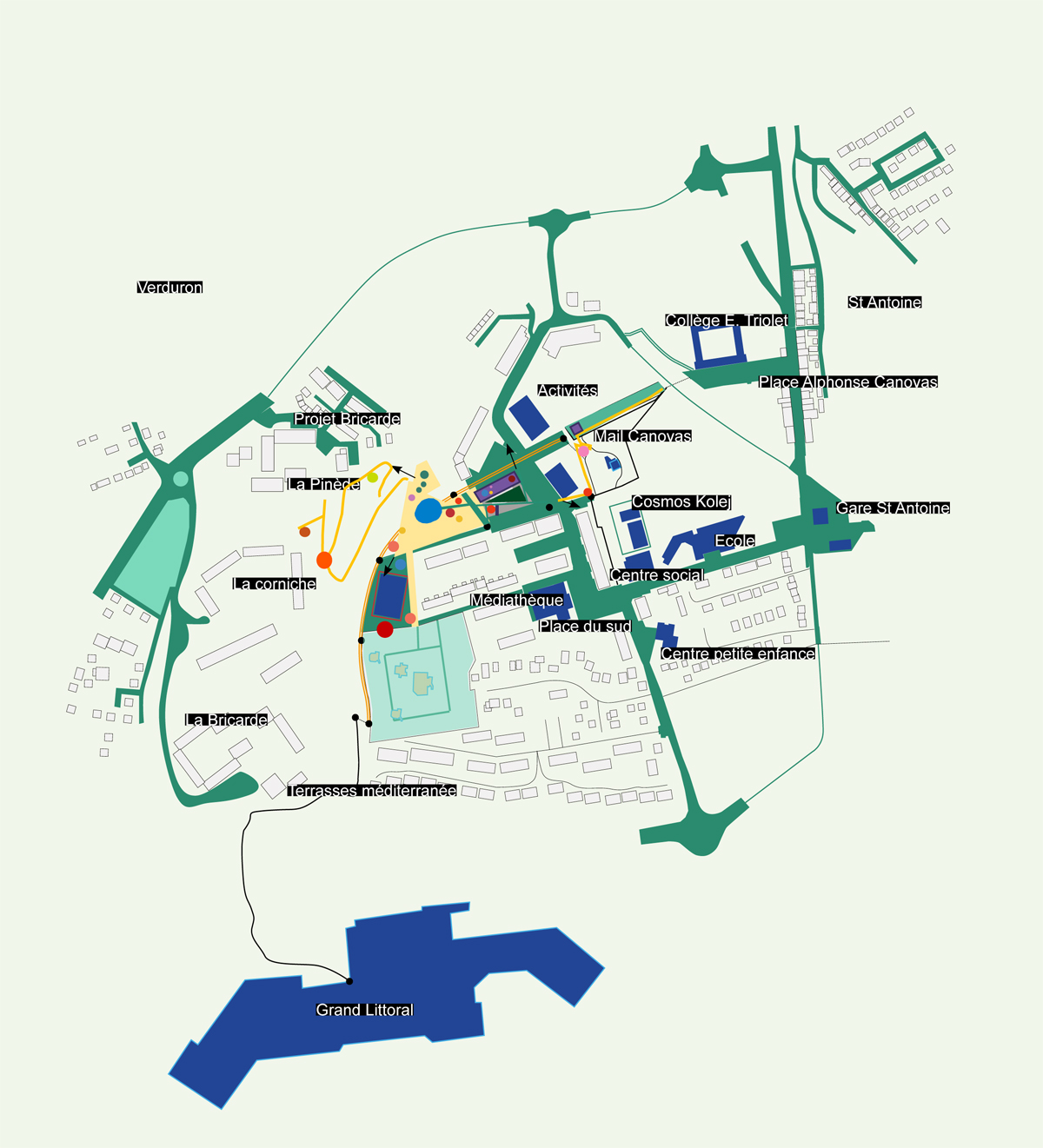 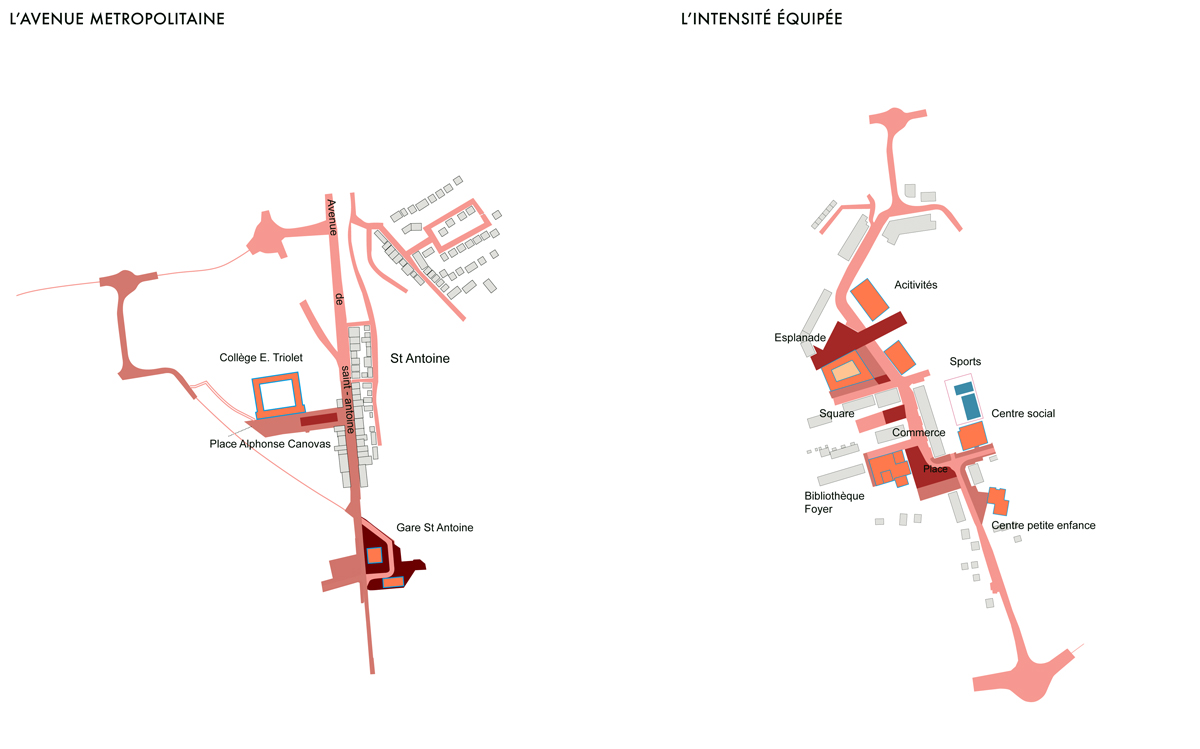 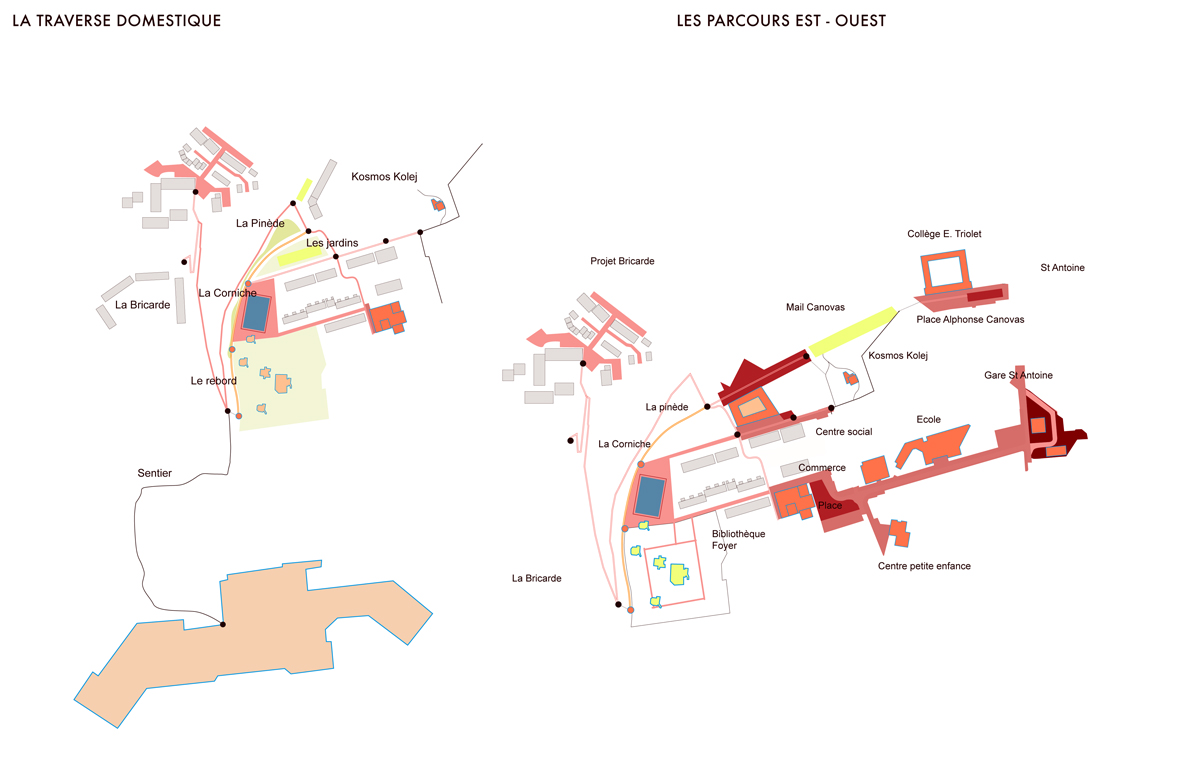 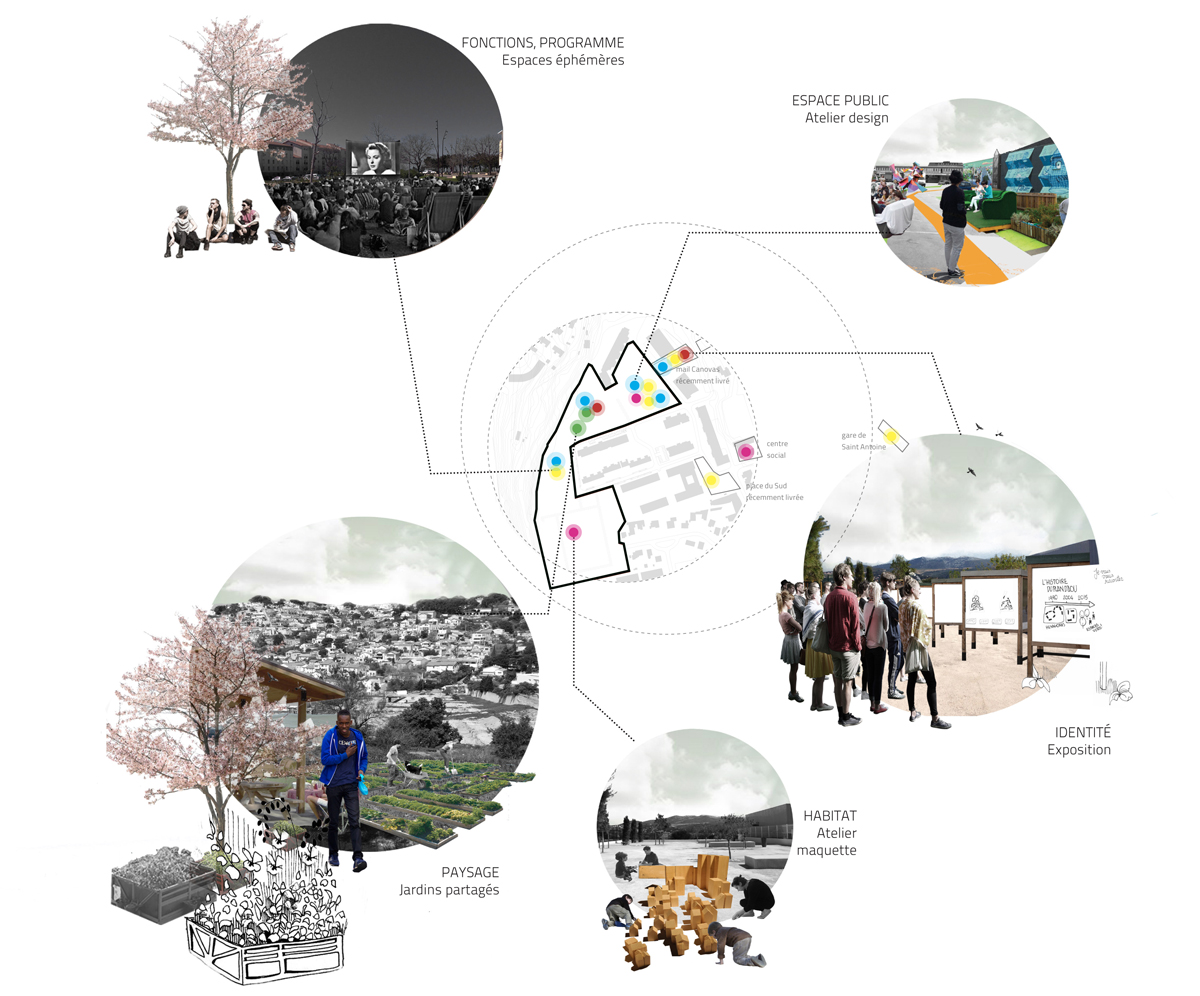 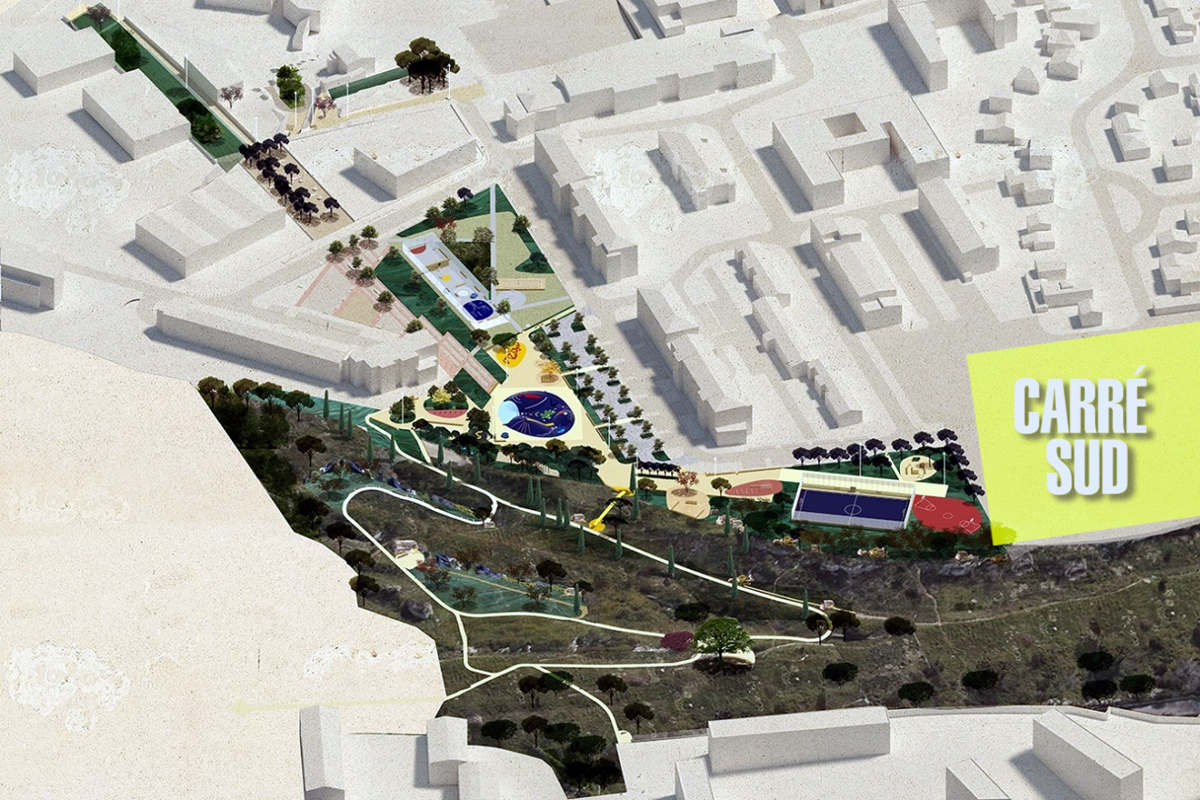 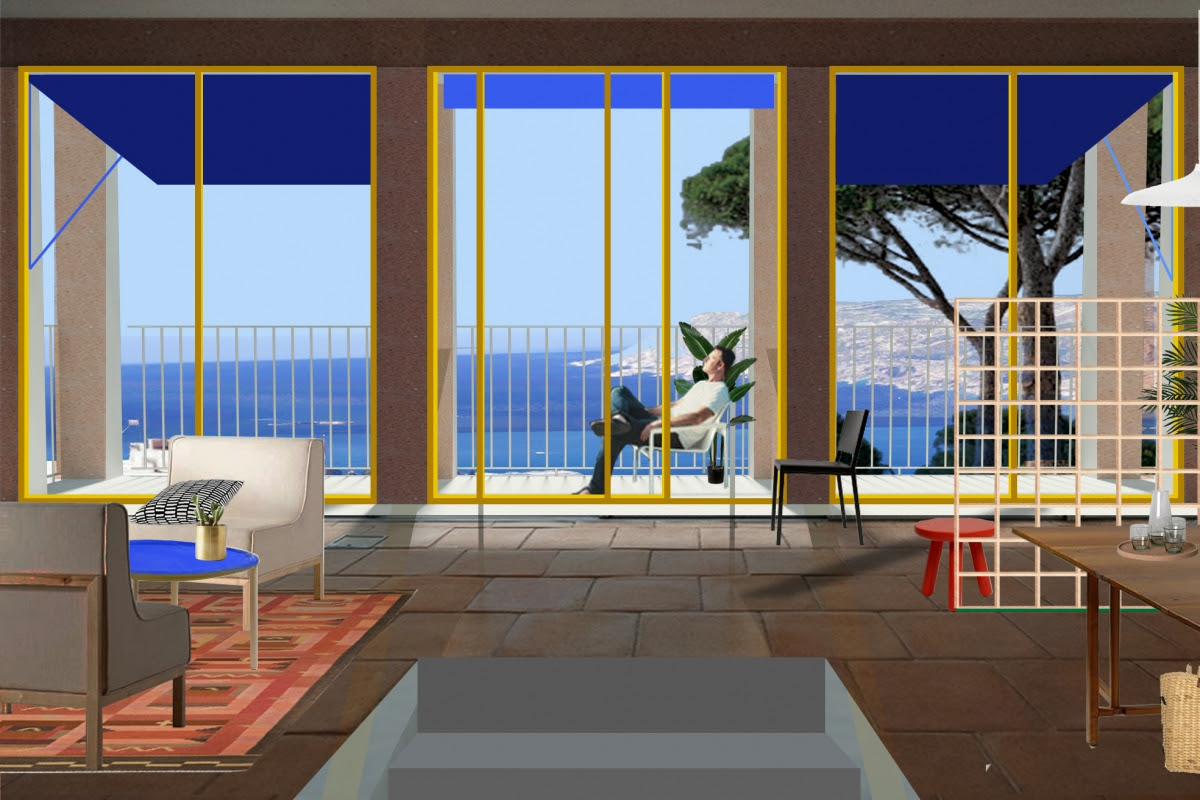 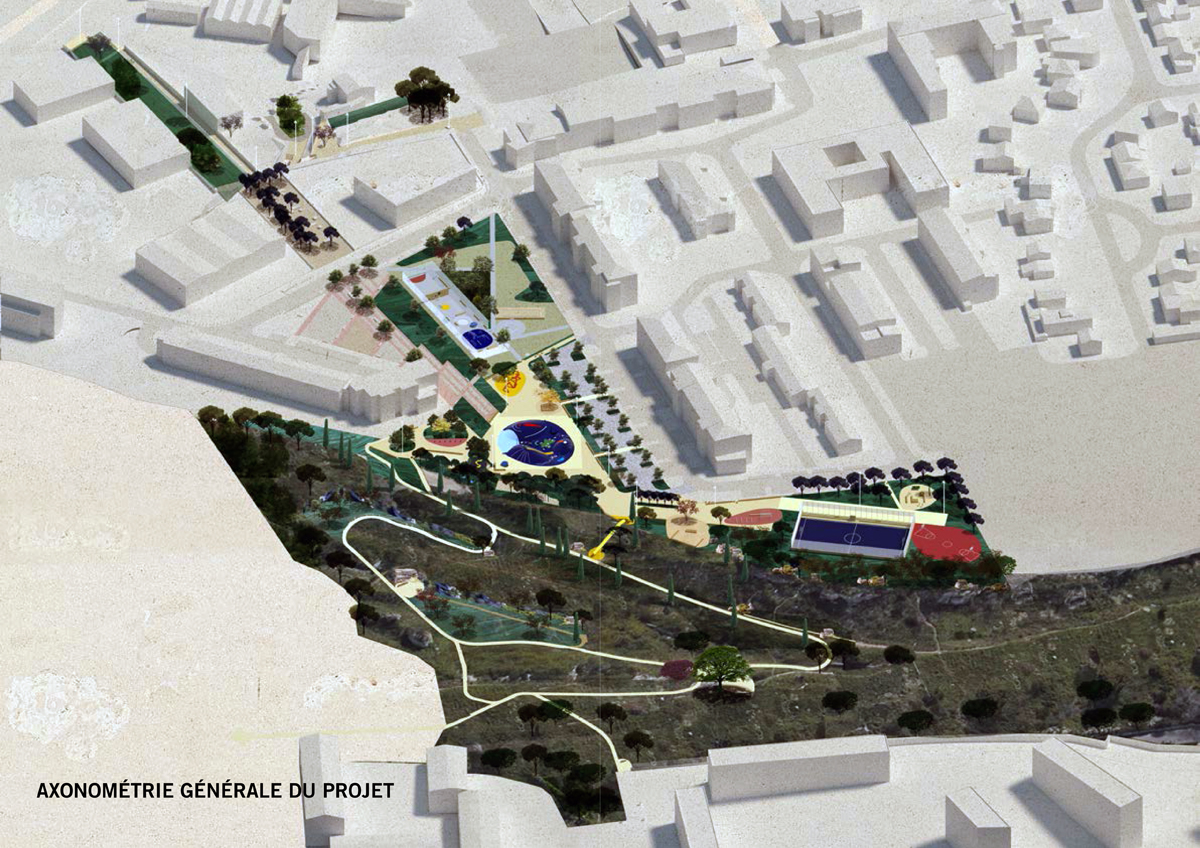 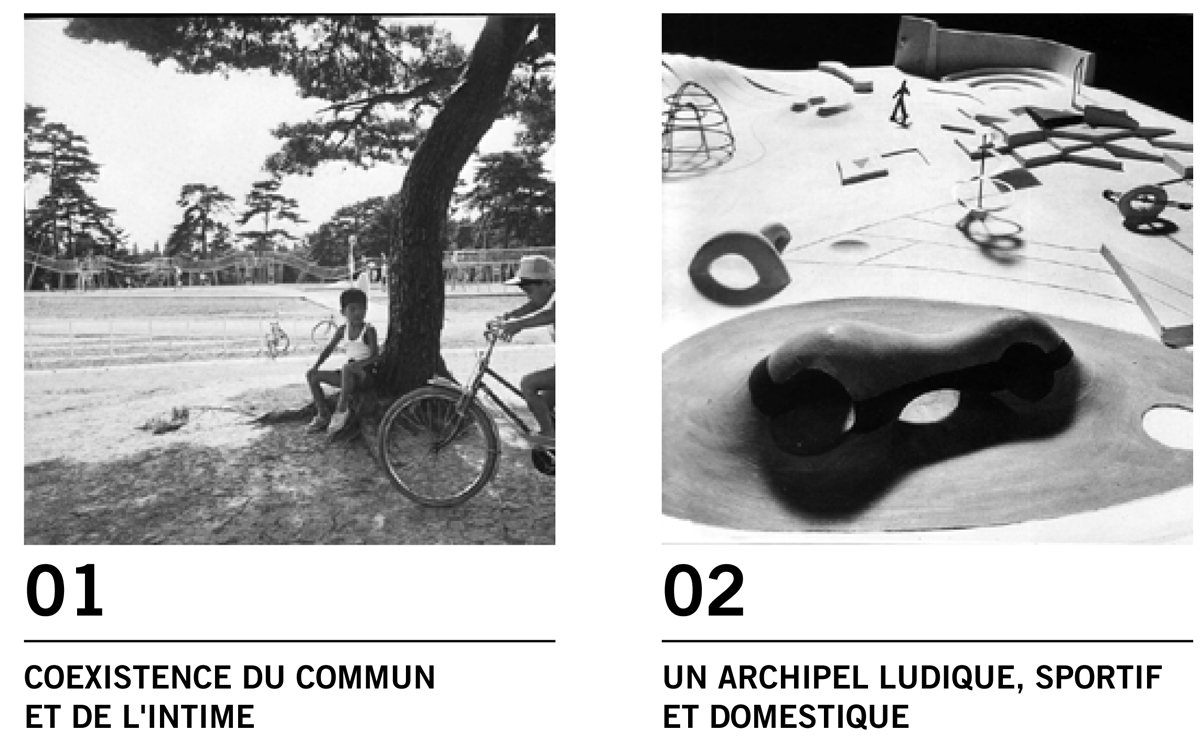 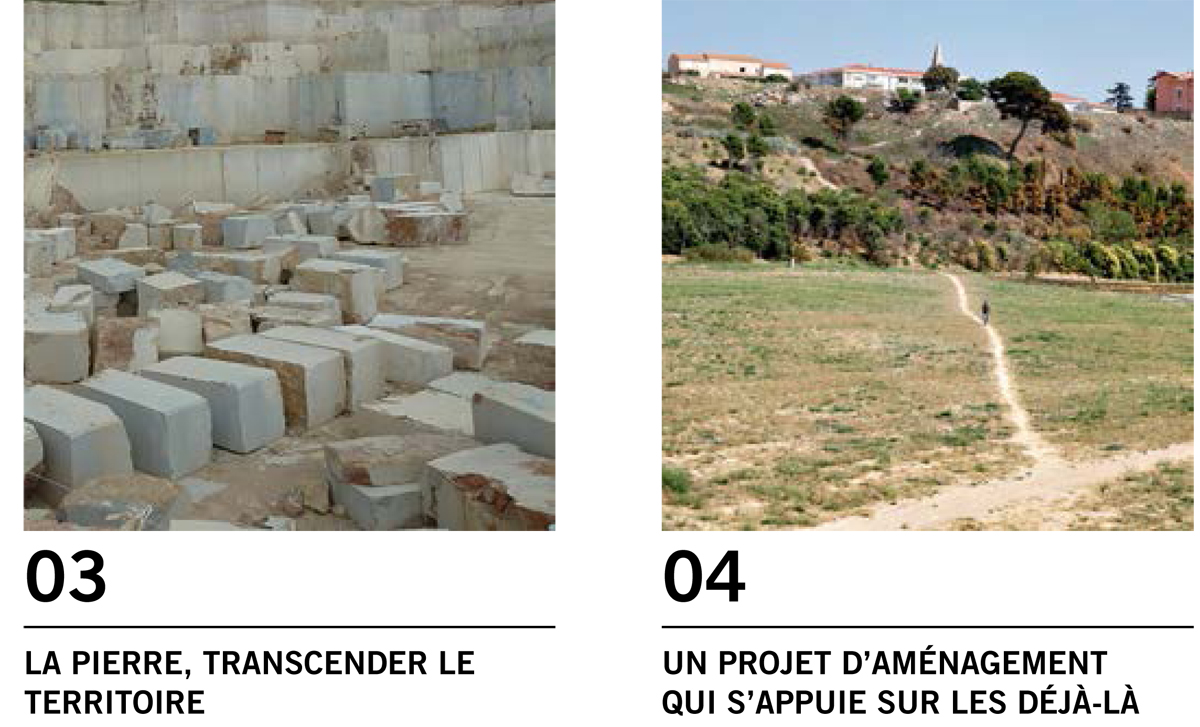 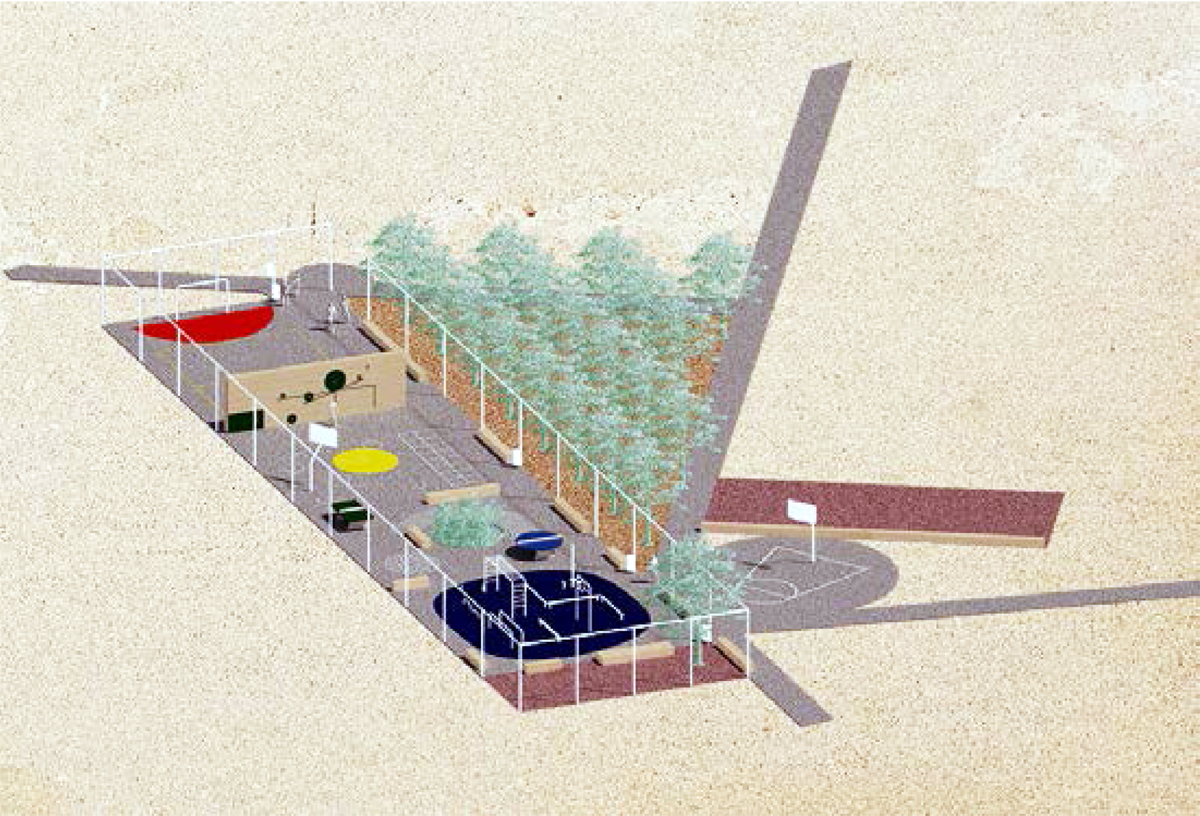 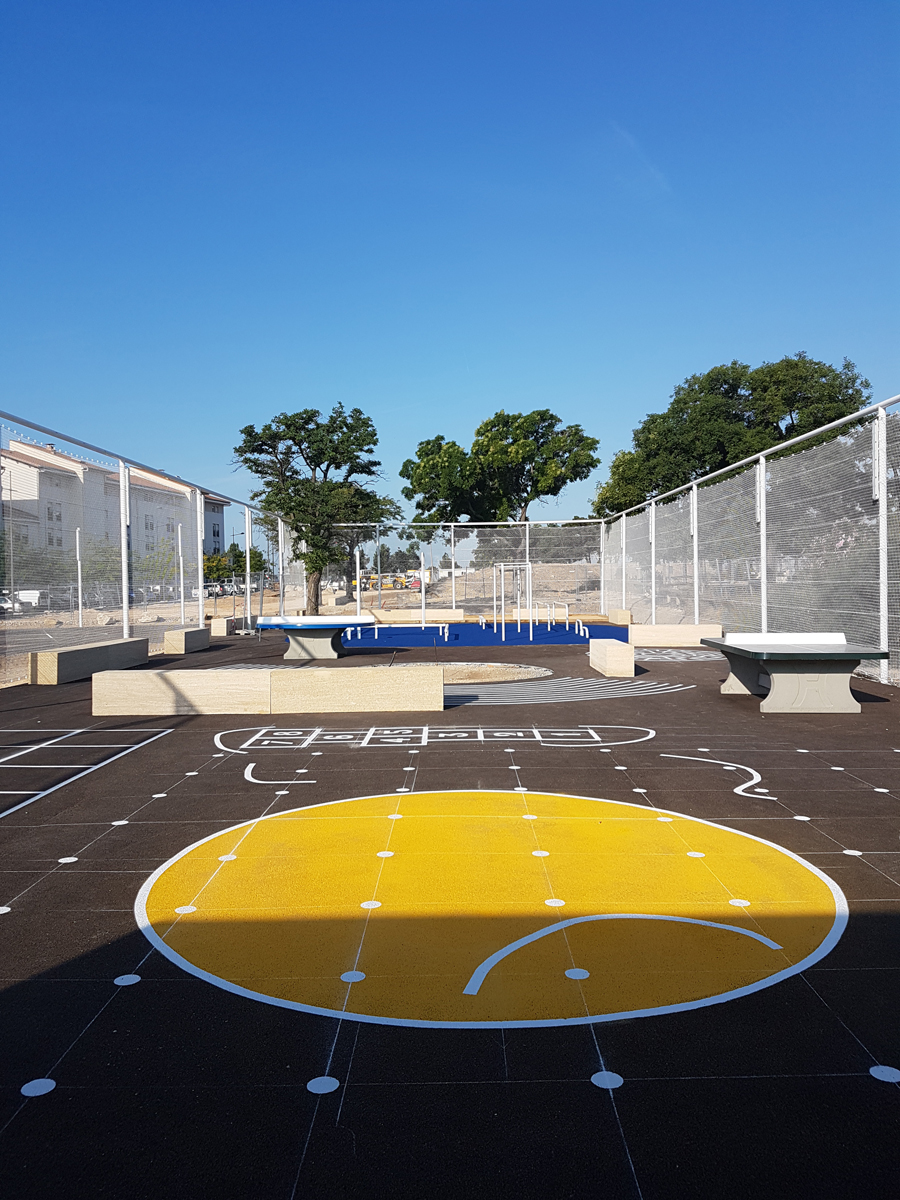 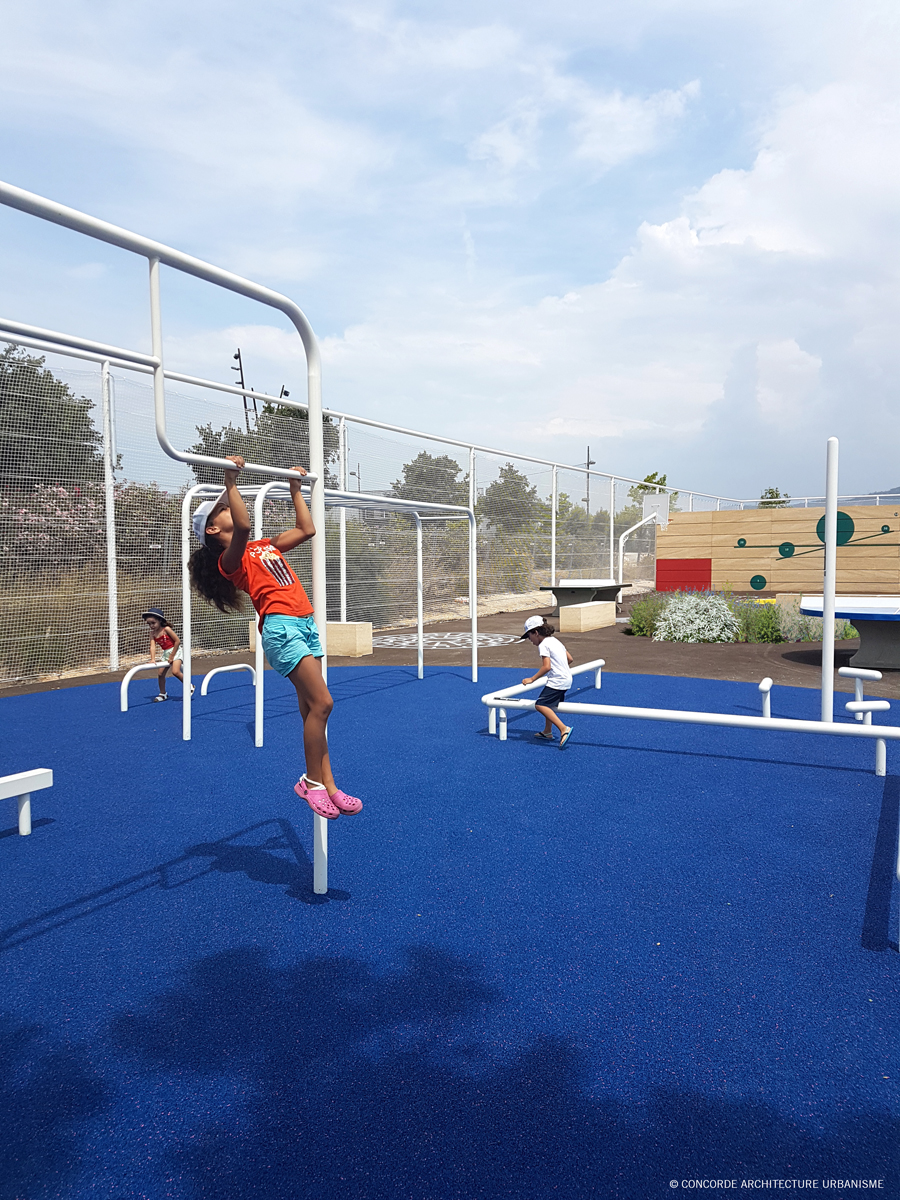 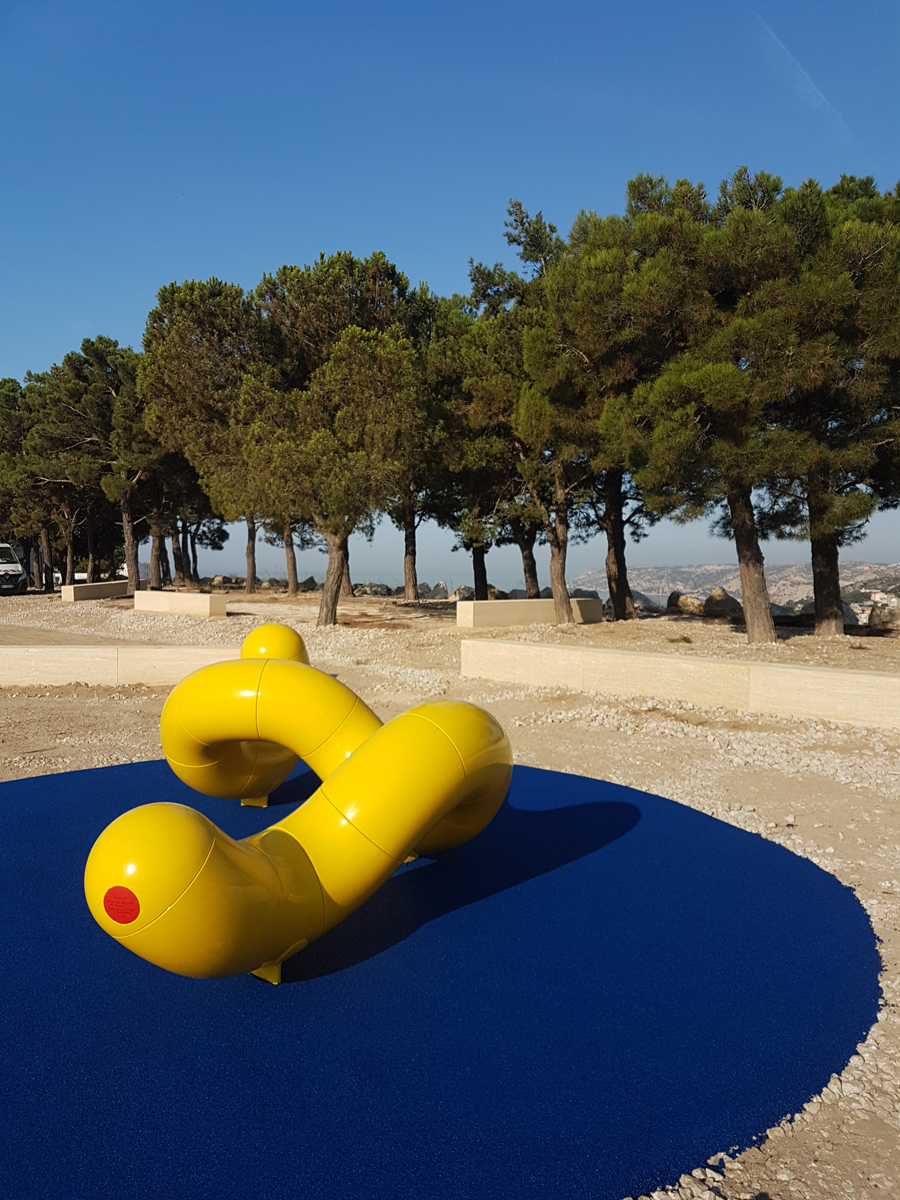 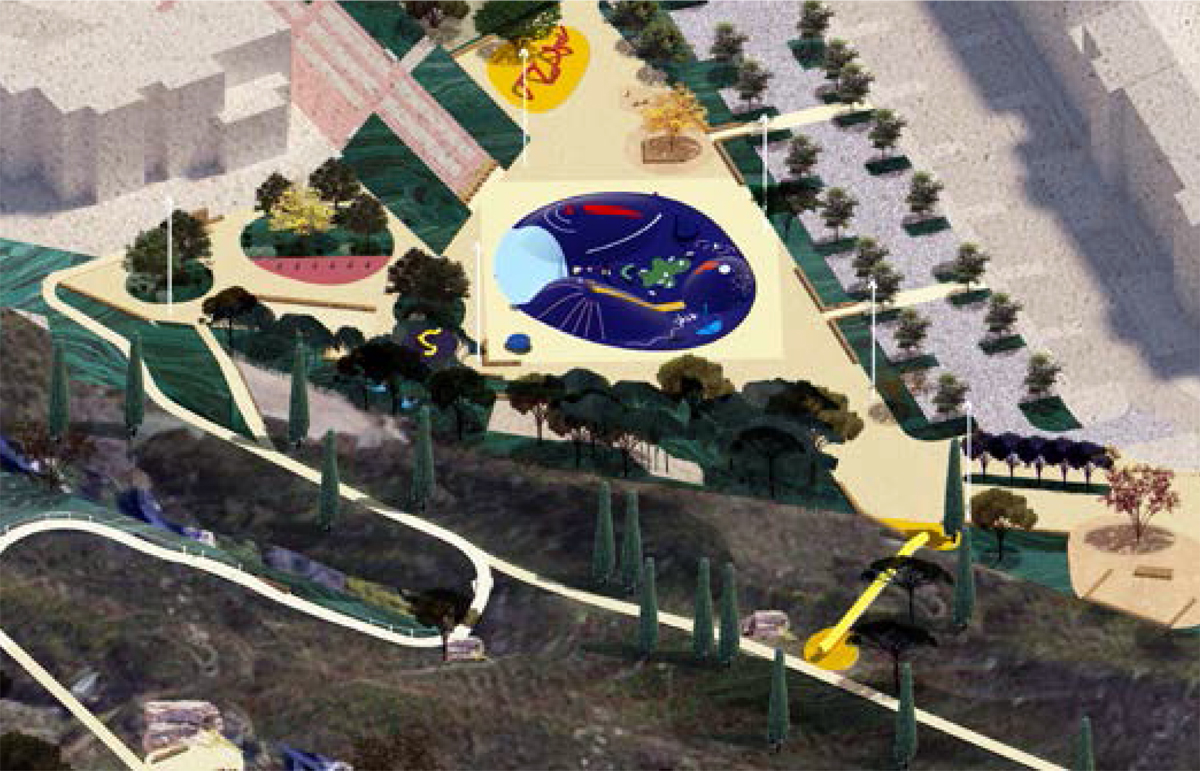 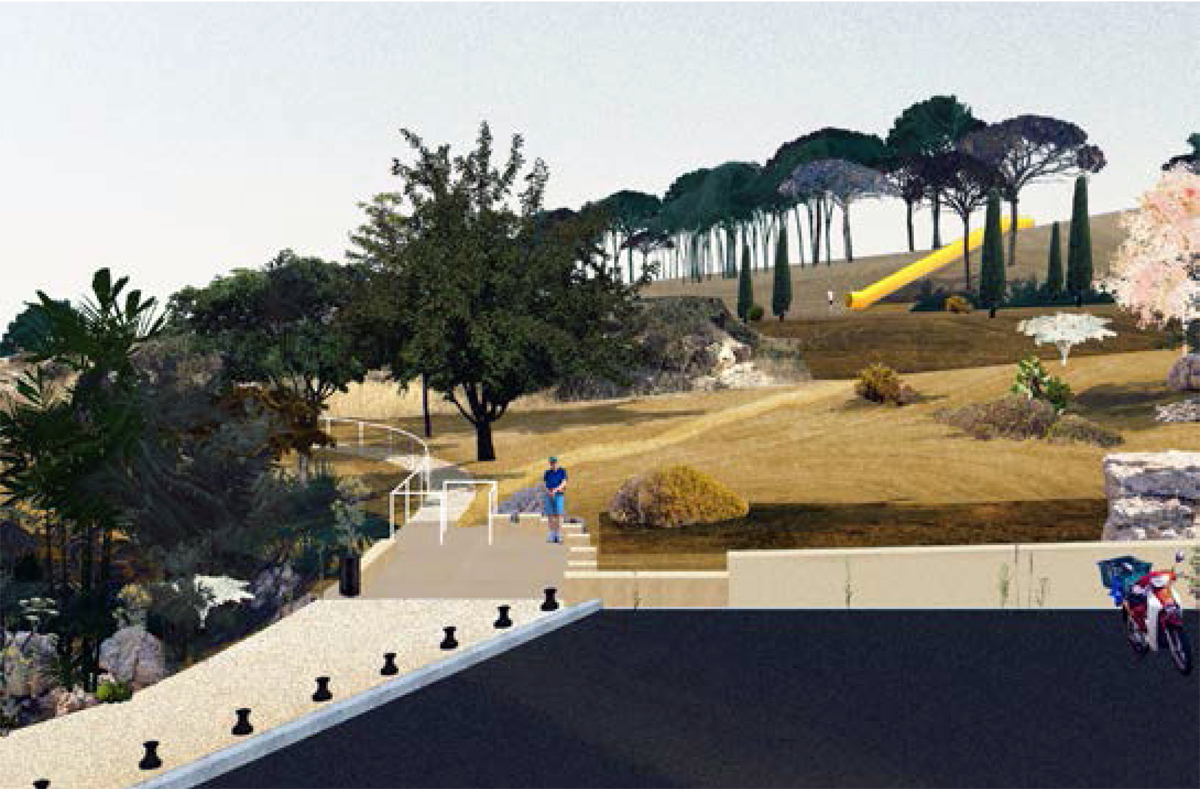 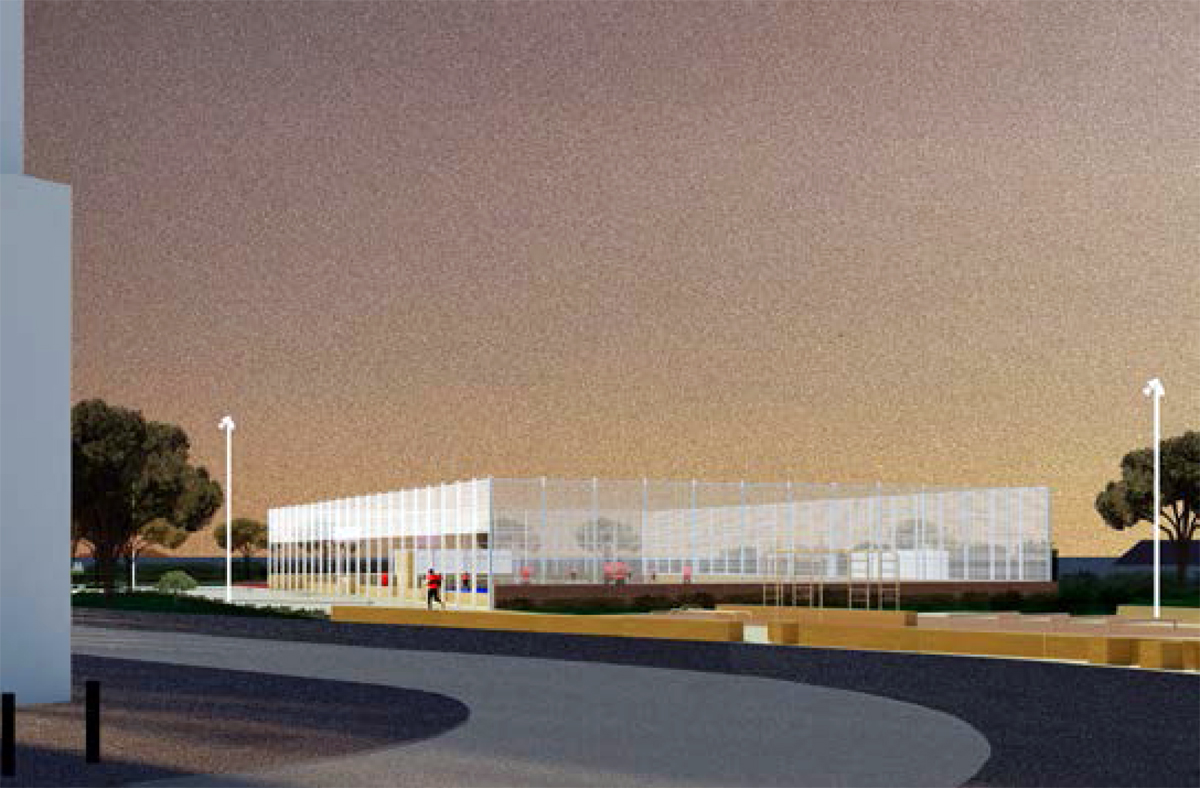 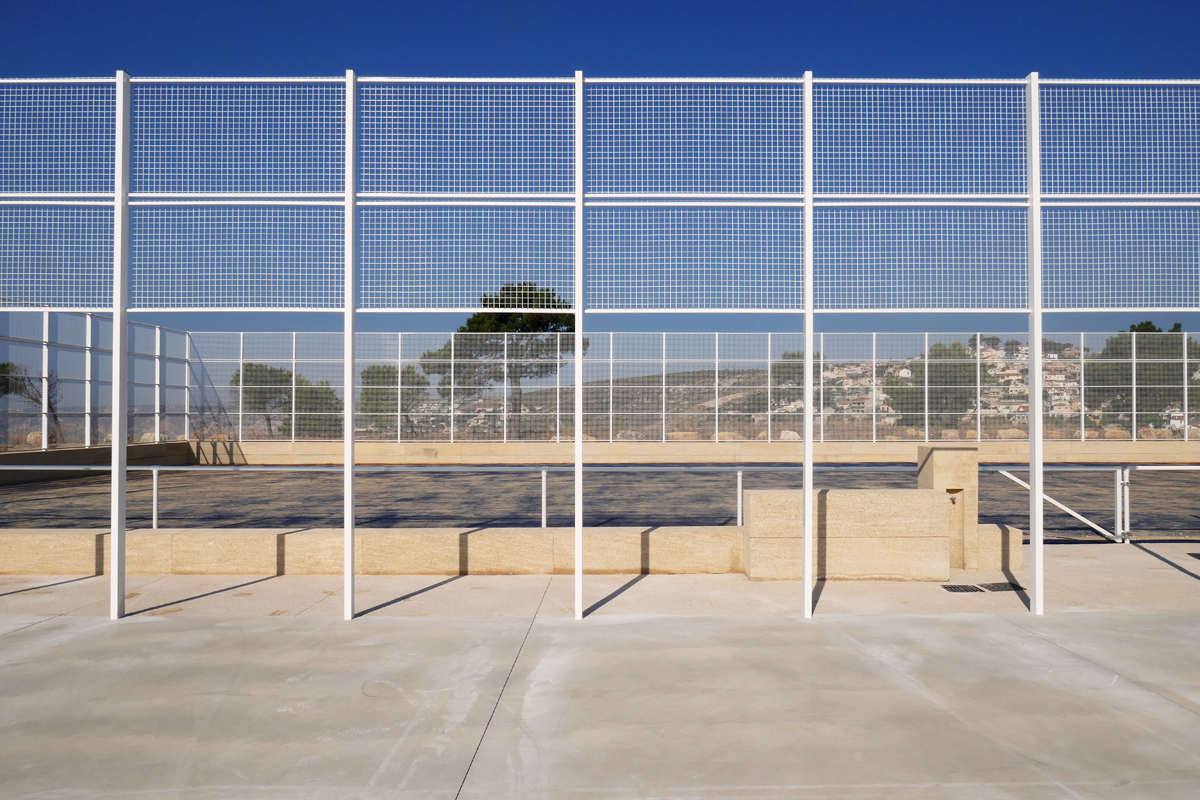 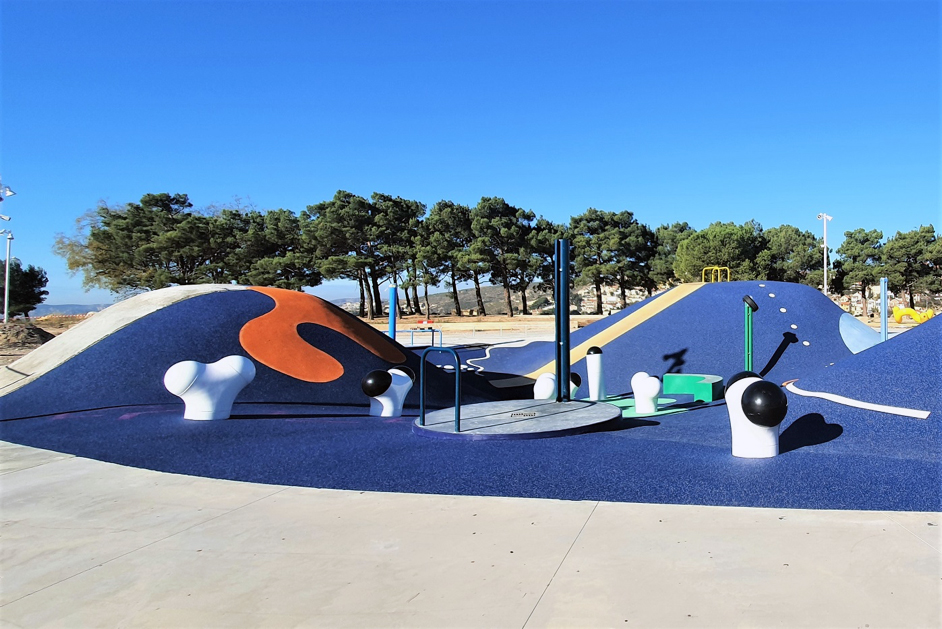