2009
The planning of [sub]urban contexts is perceived as the creation of supports for the many processes that constitute the city.
The strategy is fivefold. First, a grid of gardens initially structures the area, forming land subdivisions and urban objects. Second, building takes place around – but not inside – each of these gardens, concentrated on the north parts of the site, allowing for a more open frontage to the south. Third, these ‘extroverted’ plots are colonised by different occupants: public, developers, co-ops, individuals, etc. Initially there will be 4 public housing blocks per hectare. Fourth, each garden initially contains 370m² of potential building land, that can be increased by buying more from neighbours, or sold if not needed. Fifth, the neighbourhood gradually becomes denser, but in a heterogeneous way that always reflects its population’s needs.

2010-2015
A preliminary draft of an urban plan for the area was produced after competition.
Instead of proposing a pre-designed urban fabric, the project proposes a collective pattern for individual interpretation: a grid of gardens structures the area. It is possible to build around the gardens, not inside. Several actors (from large companies to individuals) can colonize these “extrovert plots”, promoting diversity of building scales and urban relations.
Once this structure was fixed, the next stage of the project was to investigate the relations that this framework can produce by redefining a configuration of free space. The proposal is a collective space that is reprogrammable over time and with ownership capacity. The result is a fabric that is porous not just in terms of low environmental impact, but also of constructive flexibility and process continuity: a liquid that adapts to society's changing needs.
The process has been a collective effort based on negotiation, in collaboration with the local architectural team, Mascha & Seethaler, management experts (Raum&Co), mobility (Traffix), landscaping (Land in Sicht), energy or sociology, as well as representatives of the neighborhood, the soil promoters (ARE) and the MA21 office of the Vienna City Council; all of them active participants in the design process. The team published the story of this collaborative process as a comic ("Commons"), from the winning project of the Europan 10 competition in Vienna and its later development with a multidisciplinary team until its definitive passing by the Vienna City Coucil. "Commons" obtained recognition as an example of innovative, sustainable and democratic urbanism.
One of the most challenging issues of today is the question whether housing in itself, as a programme, has the power to generate an urban neighbourhood. “Garden>Courtyard” plays the ball straight back to the municipality, developers and users, suggesting an extrapolated concept of mixing with just a single programme – housing: housing with diverse models of living, diverse models of sharing, diverse models of developing, diverse models of financing, diverse models of landscaping diverse models of maintaining.
After a 5 years long collaborative planning process, the master plan has been approved in September 2015 by the municipality of Vienna.

2016-2022
After approving the master plan ‘Wildgarten’ as evolution of the winner project of Europan 10, the urbanization works in the new 10 hectar district in Emil-Behring-Weg (Meidling, Vienna) started.
The landowner (ARE, Austrian Real Estate) commissioned multiple architecture teams as well as different sponsors to develop an edification design. In partnership with the Viennese enterprise for social housing and different cooperatives, a collaborative democratic and plural urbanism process was created.
Arenas Basabe Palacios was commissioned with the design and execution of 11 housing blocks in different scales, including 82 housing units with a total of 9500 m2 constructed surface containing community spaces, shared parking facilities for bicycles and commercial spaces in the ground floor zone.
In the foreseen urban tissue, the series of buildings joins different urban elements: a rehabilitated historic building transformed into a cultural centre, a grouping of cooperative housing units, an urban square with local suppliers and services, etc.
The ’Allmende’, a wild/natural free space between the buildings, strengthen pedestrian connections and the continuity of local flora and fauna. Those characteristic green zones are lowmaintenance and flexible to adapt to resident’s needs.
The design respects the original urban idea and furthermore creates new potential based on the garden-matrix, which is structuring the new district. Each block is constructed around its garden while edification varies in height, bay and edification type: constructions of small scale (size S) contain single-family housing and duplex; Medium-scaled buildings (size M) as their taller complements (size L) serve as collective housing blocks and develop a diverse and porous urban process.
The materiality of the buildings accentuates this idea: ceramic color façades are facing the sun, while all living spaces are south-orientated and opened towards the garden. A characteristic construction system with load-bearing walls of isolated ceramic blocks (‘Hochlochziegel’) defines the dwelling’s interiors with a sequence of neutral, flexible and reconfigurable spaces.
The relationship with its built environment presents a sensitive balance of building scales, which guarantee good sunlight in all the interior rooms, the south-facing gardens and the intermediate free spaces, creating a friendly transition with the adjoining architectures.
The result is a residential fabric that is both unitary and diverse, with an architecture that reflects the urban/natural duality of the urban planning project, thus qualifying the entrance to the new Wildgarten neighbourhood. 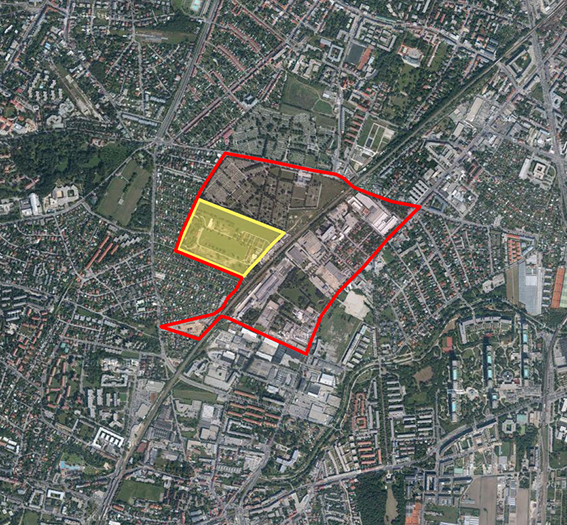 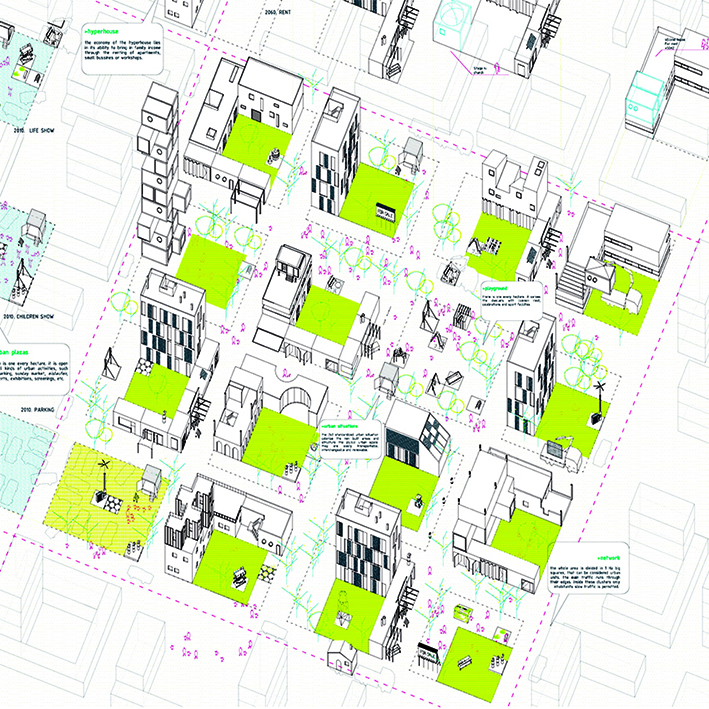 The project consists in a process of urban development founded on a series of basic rules: establishment of a garden grid, peripheral construction, appropriation and densification, diversification. 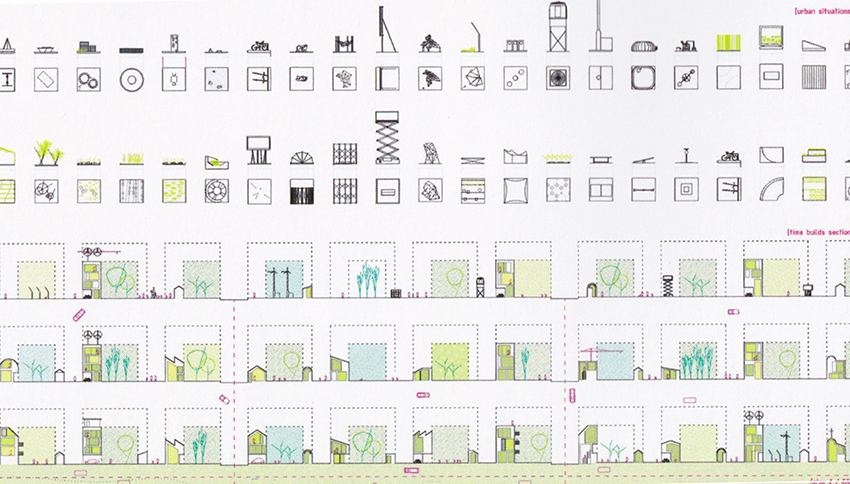 The great typological diversity developed by the project serves a large-scale urban morphology, a heterogeneous and adaptable development plan for the city of Vienna. 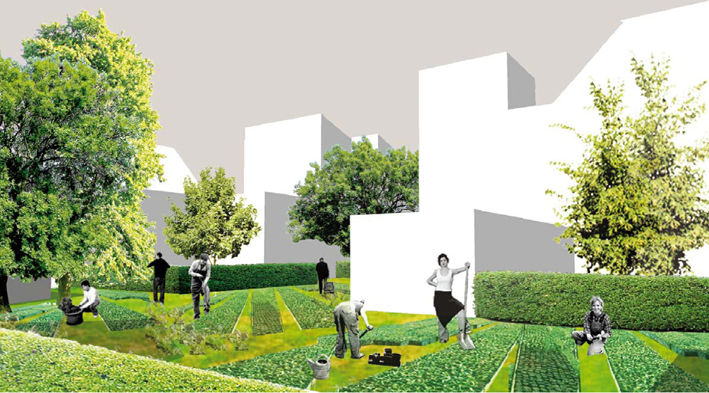 The site is structured by a grid of gardens intended to evolve as the city evolves. A network of open spaces gradually develops, for direct transformation by the inhabitants that will directly influence the neighbourhood’s identity. 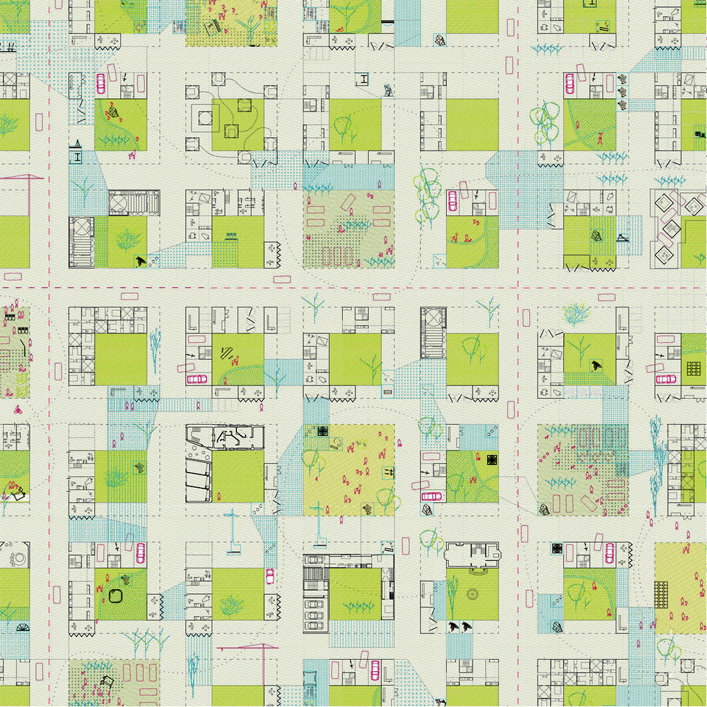 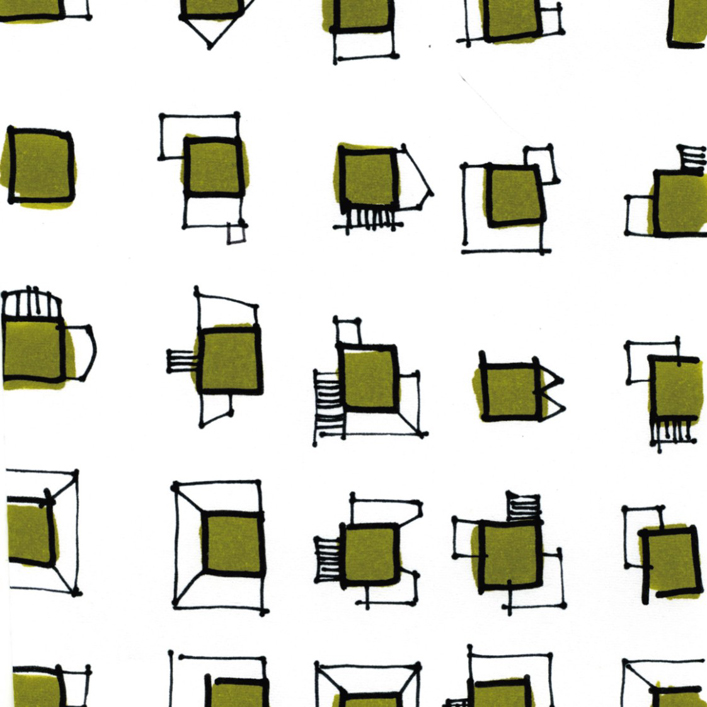 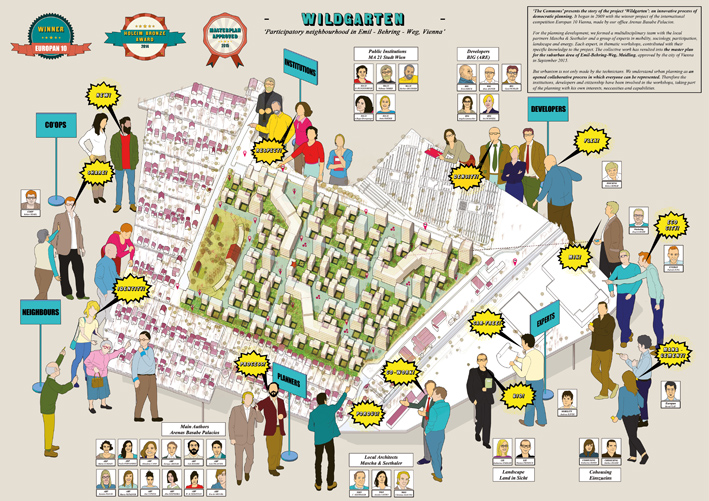 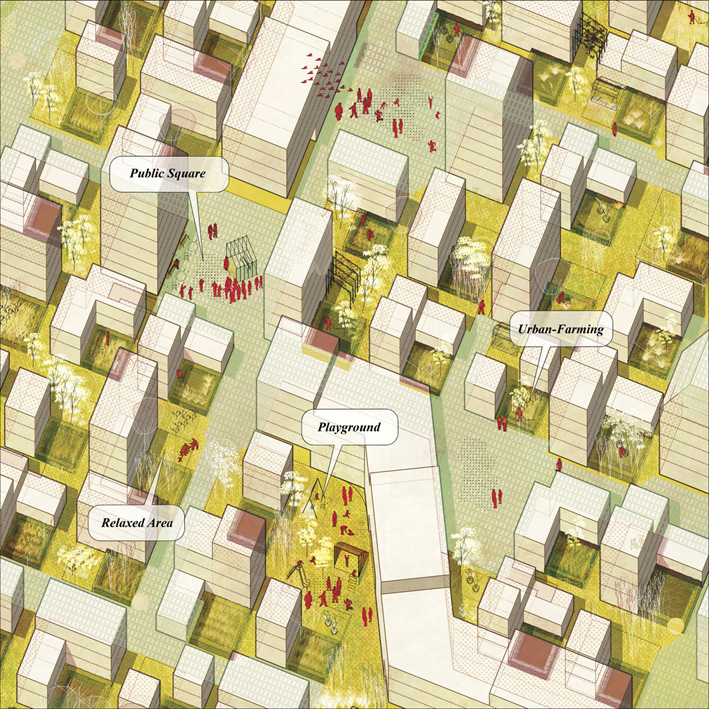 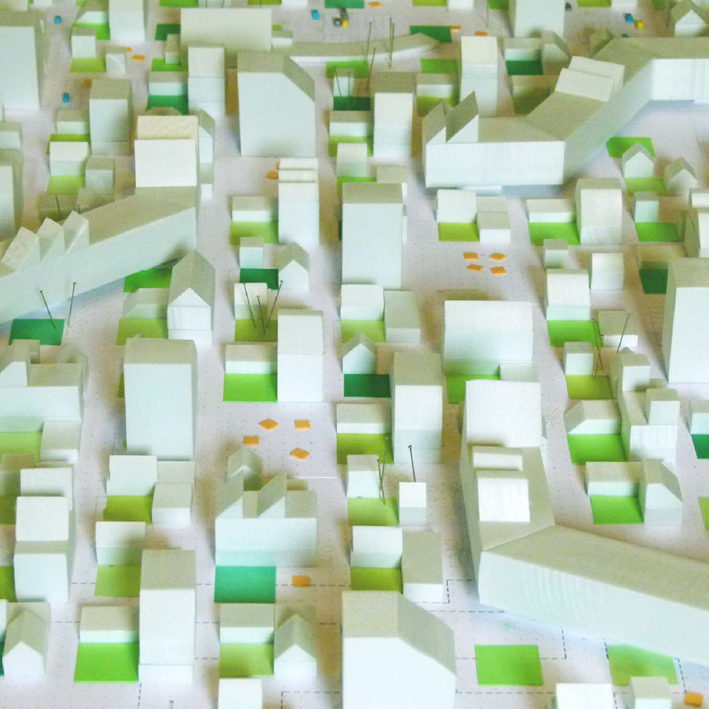 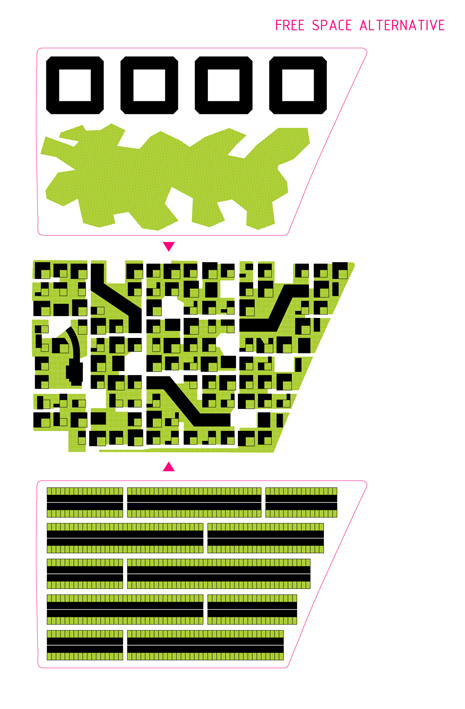 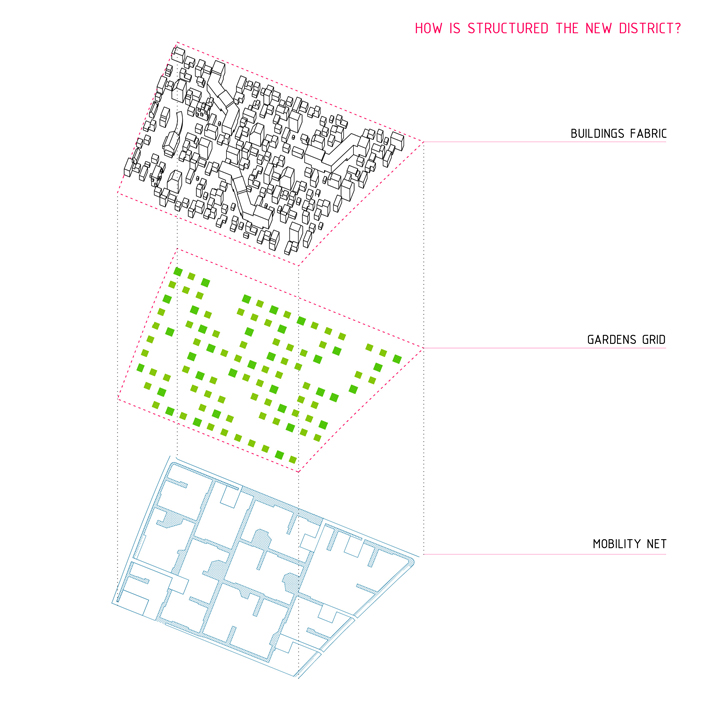 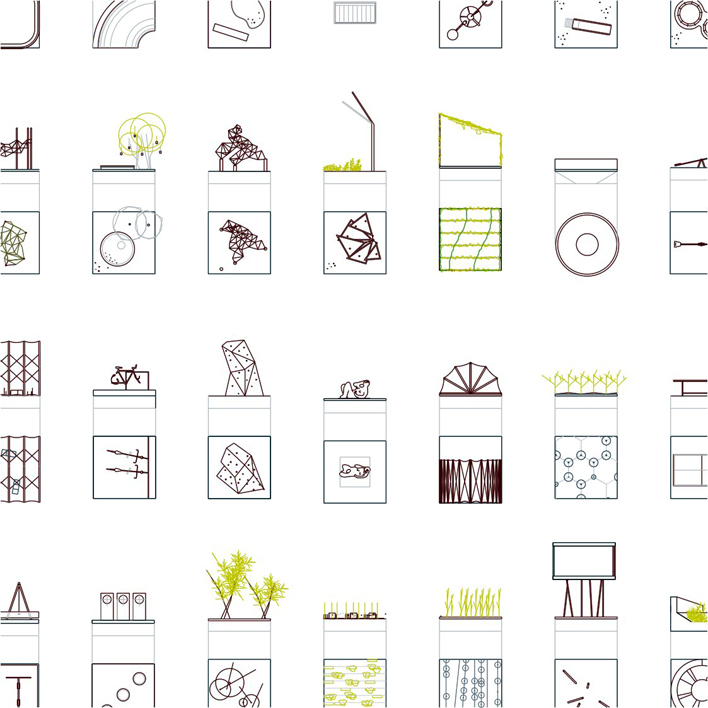 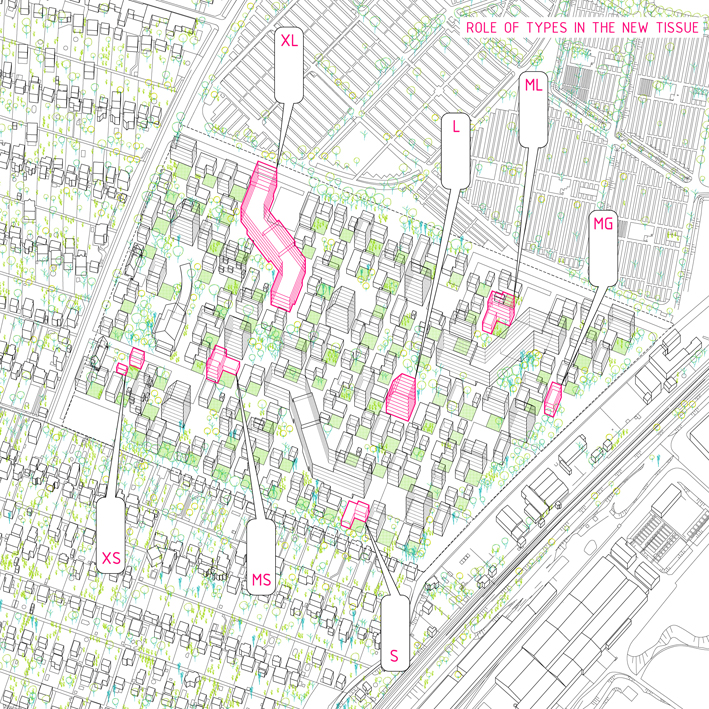 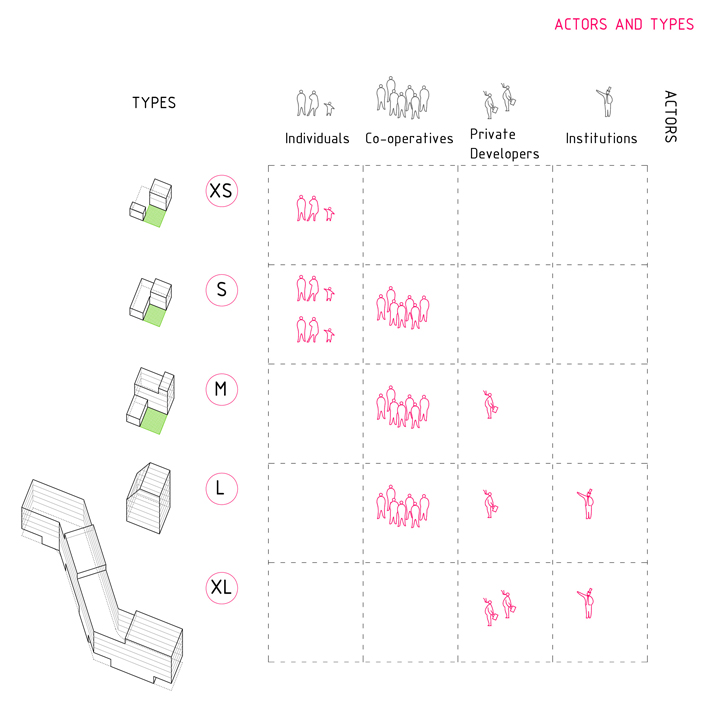 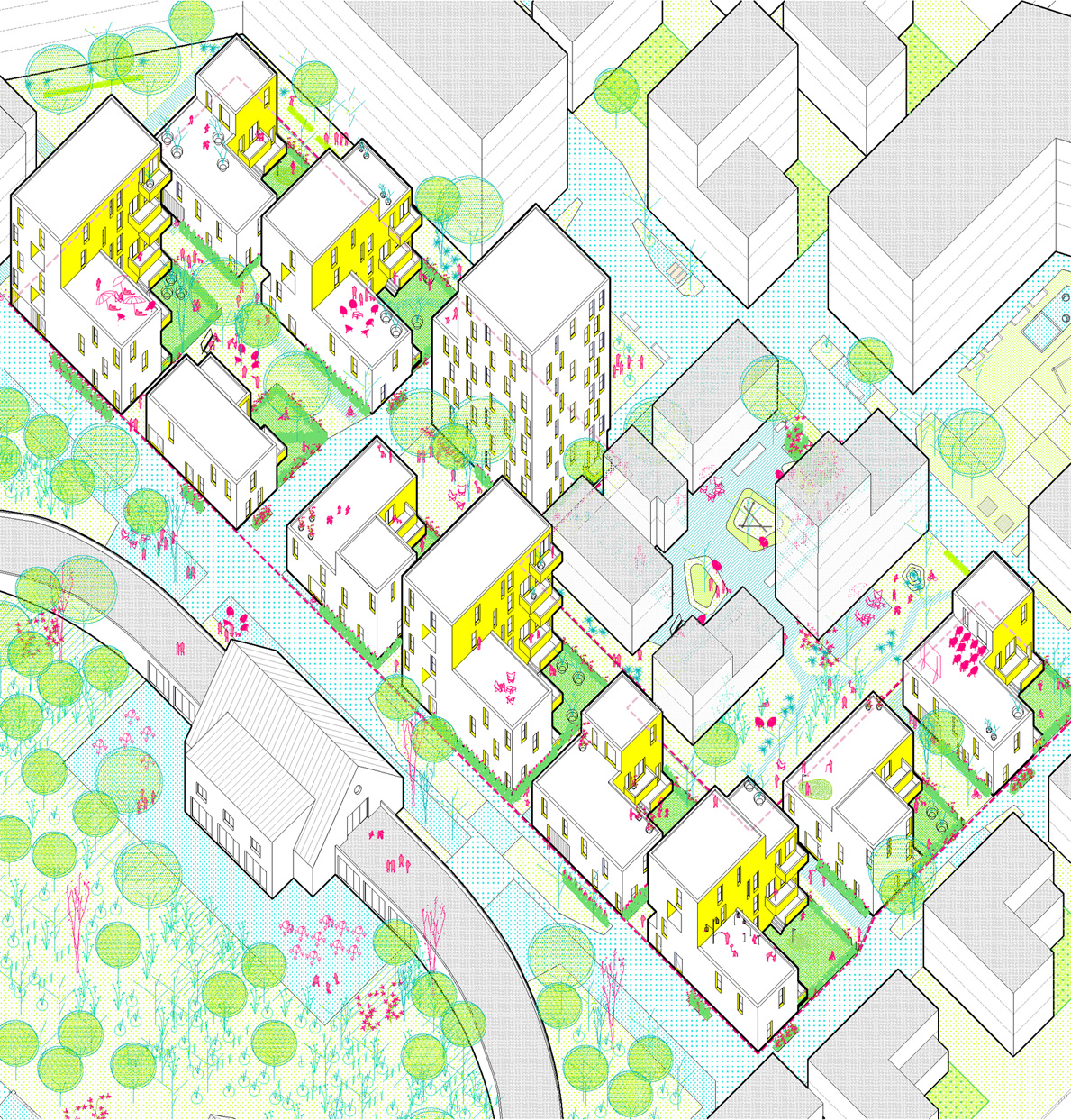 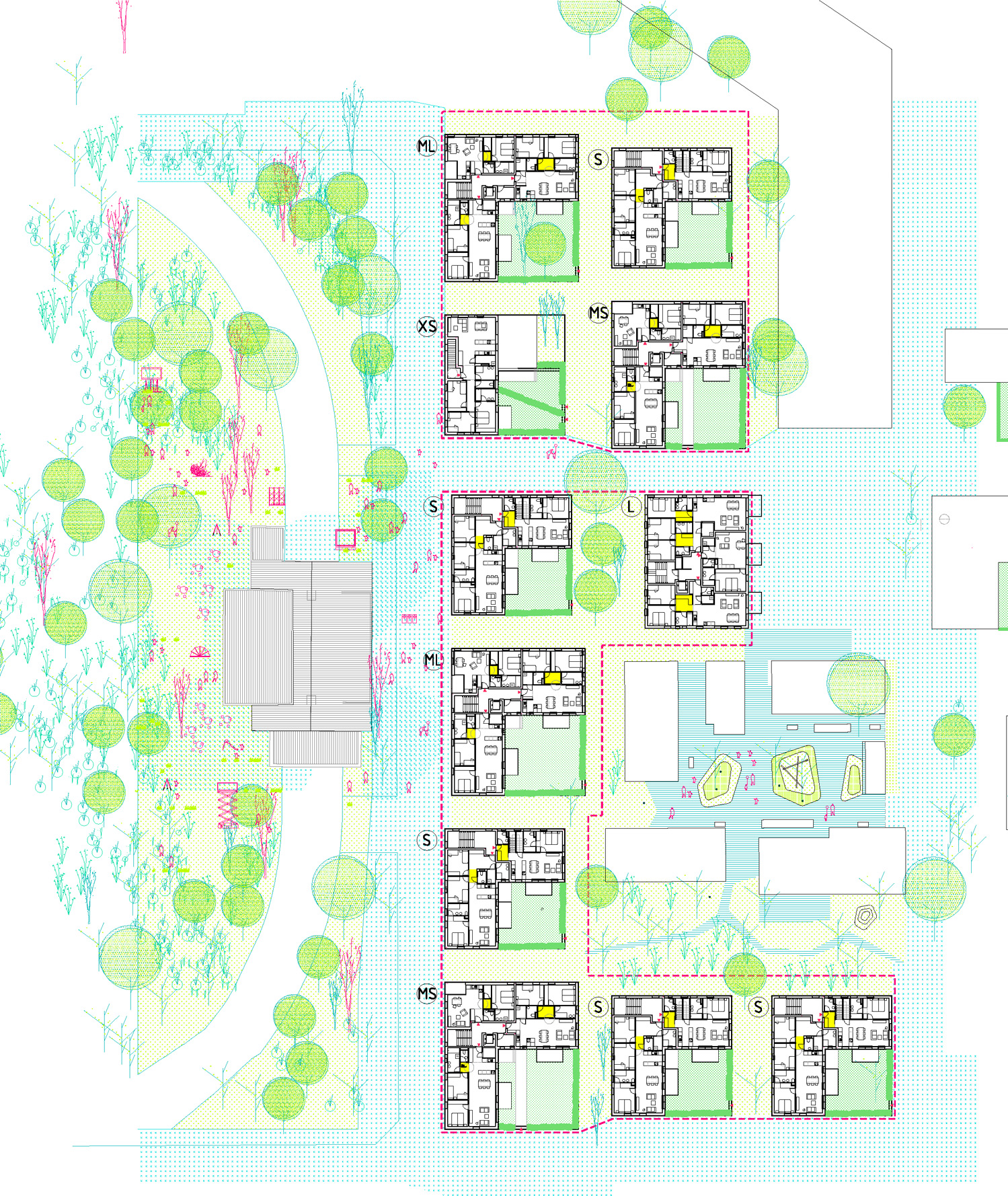 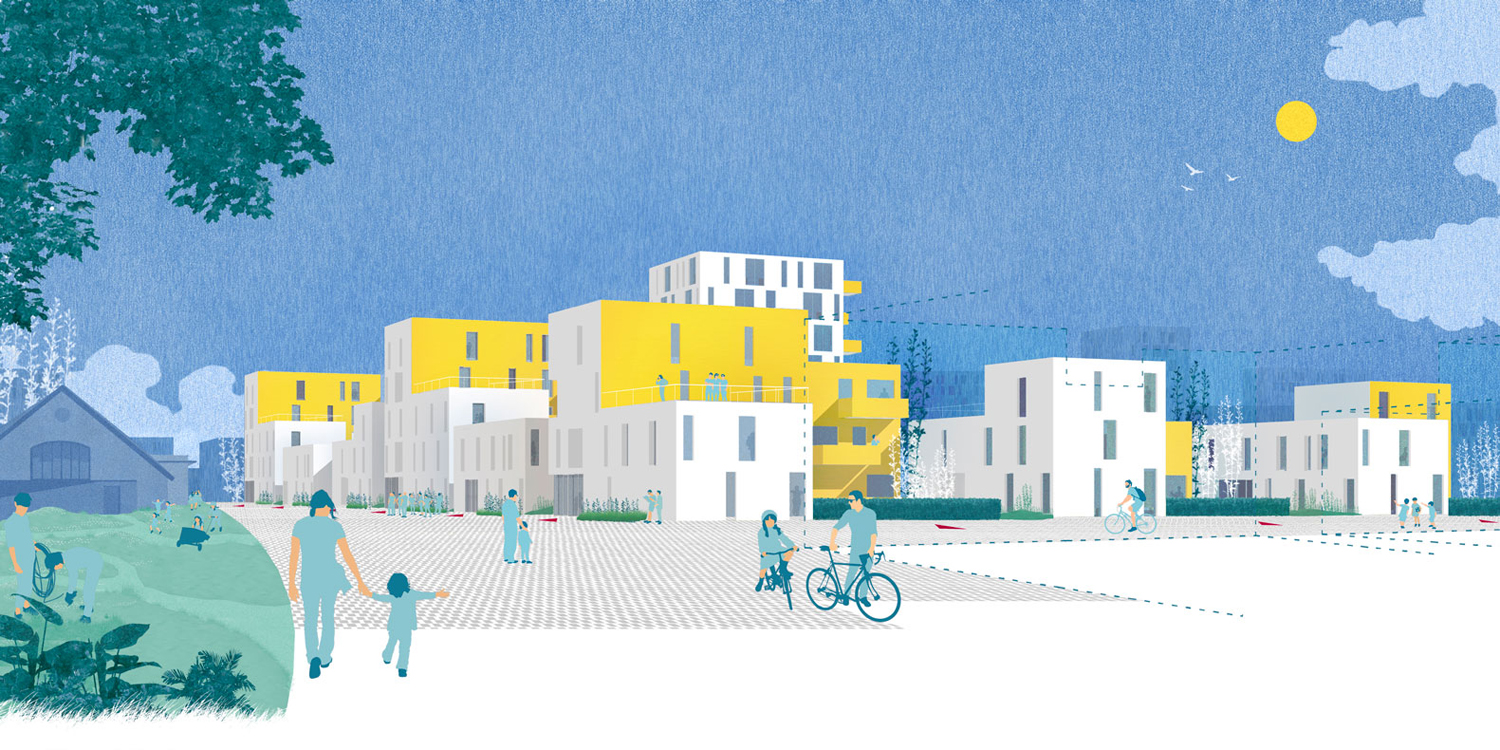 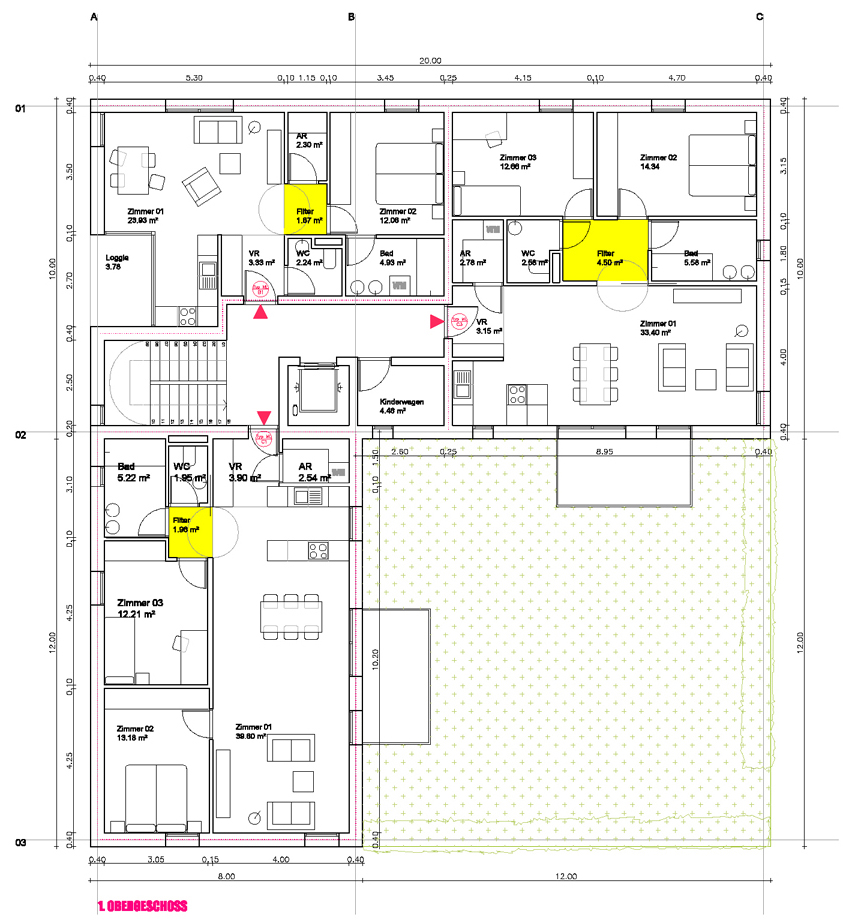 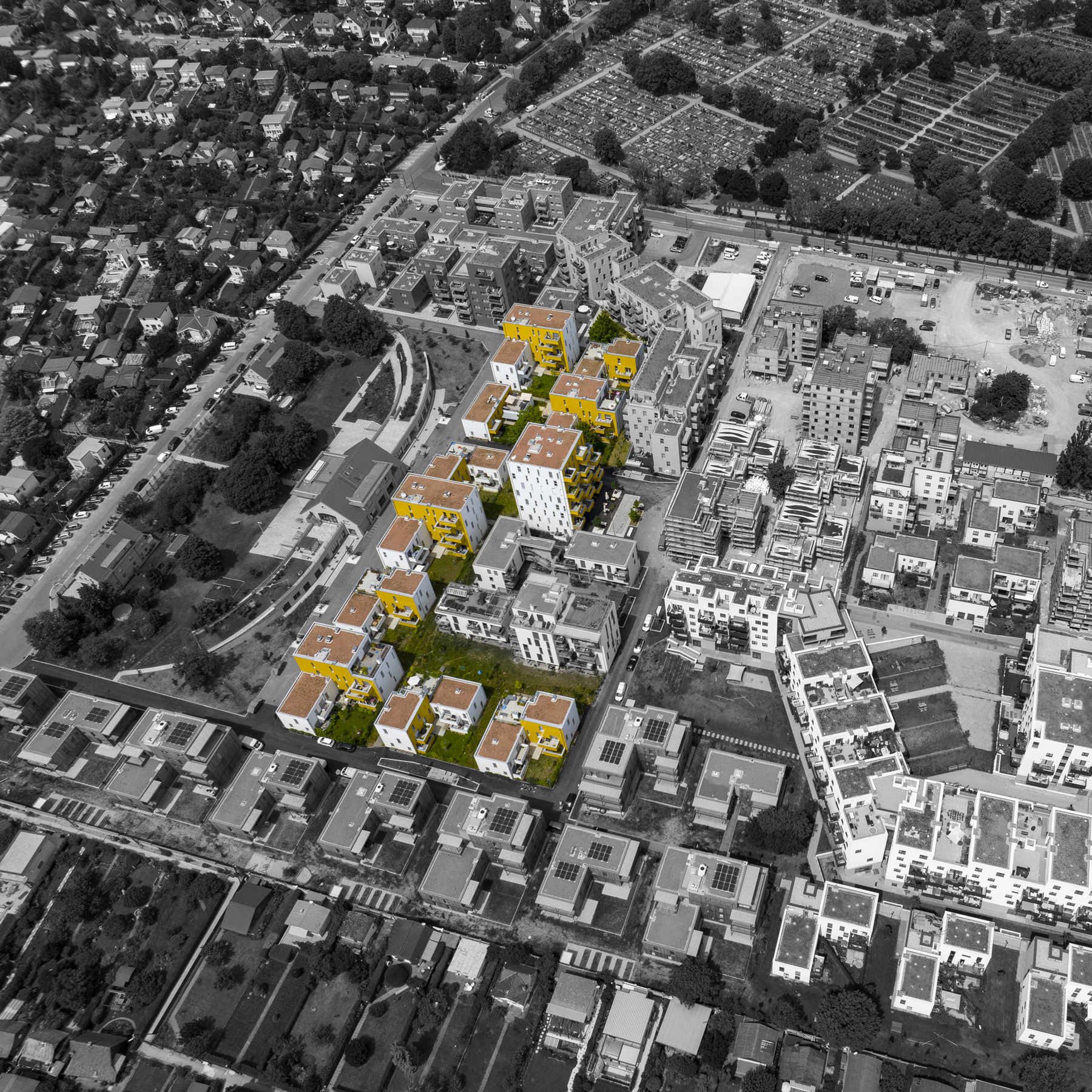 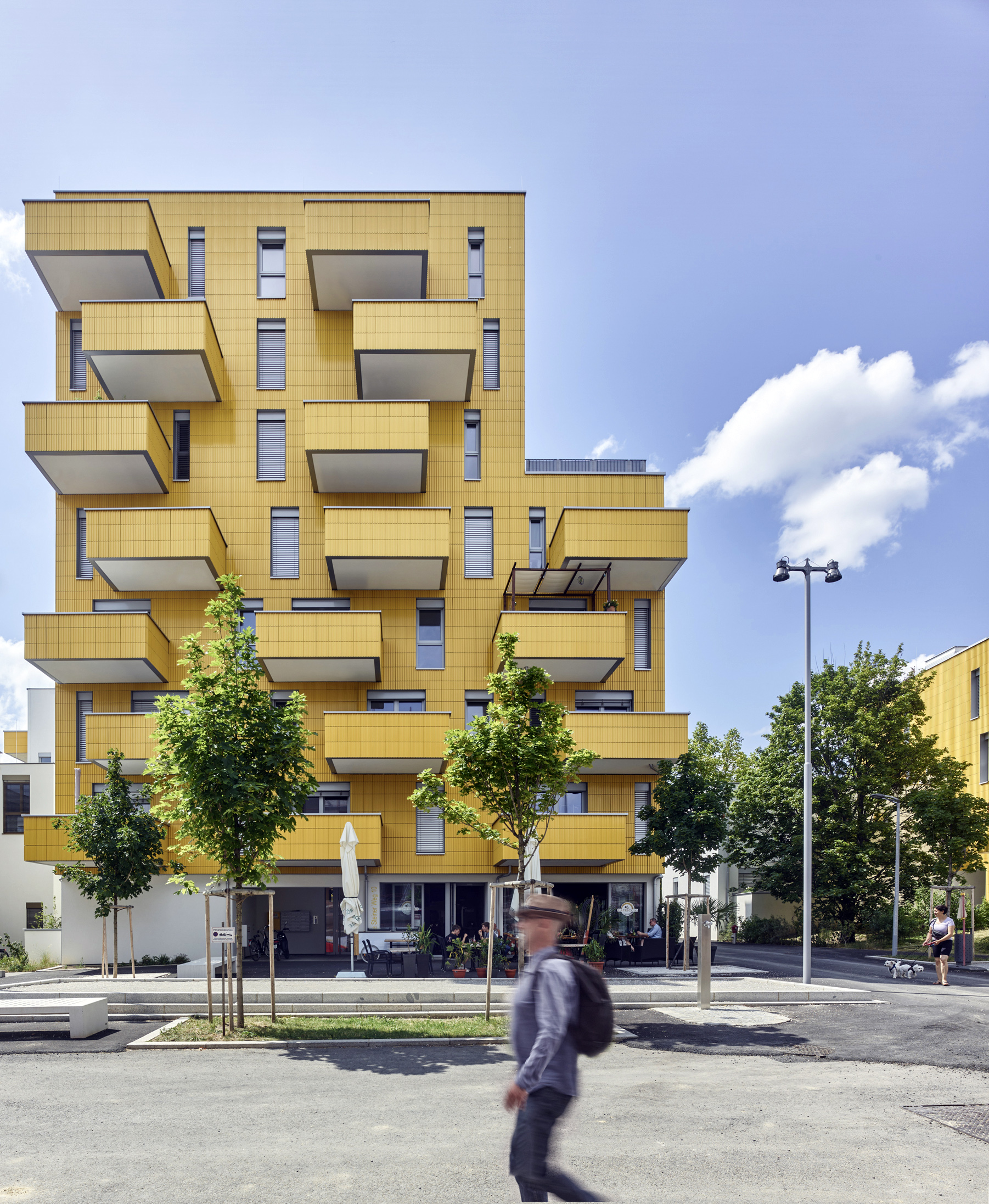 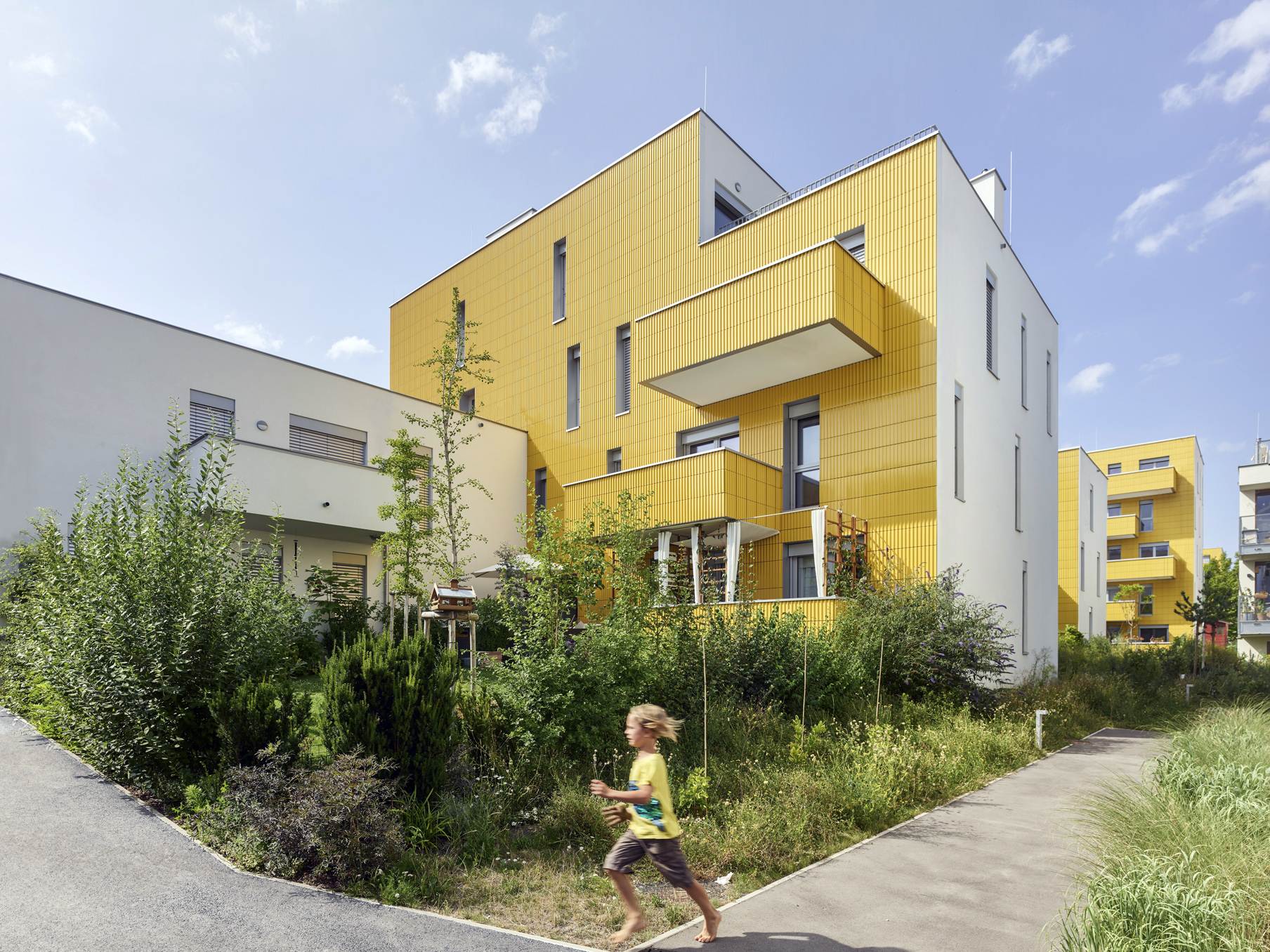 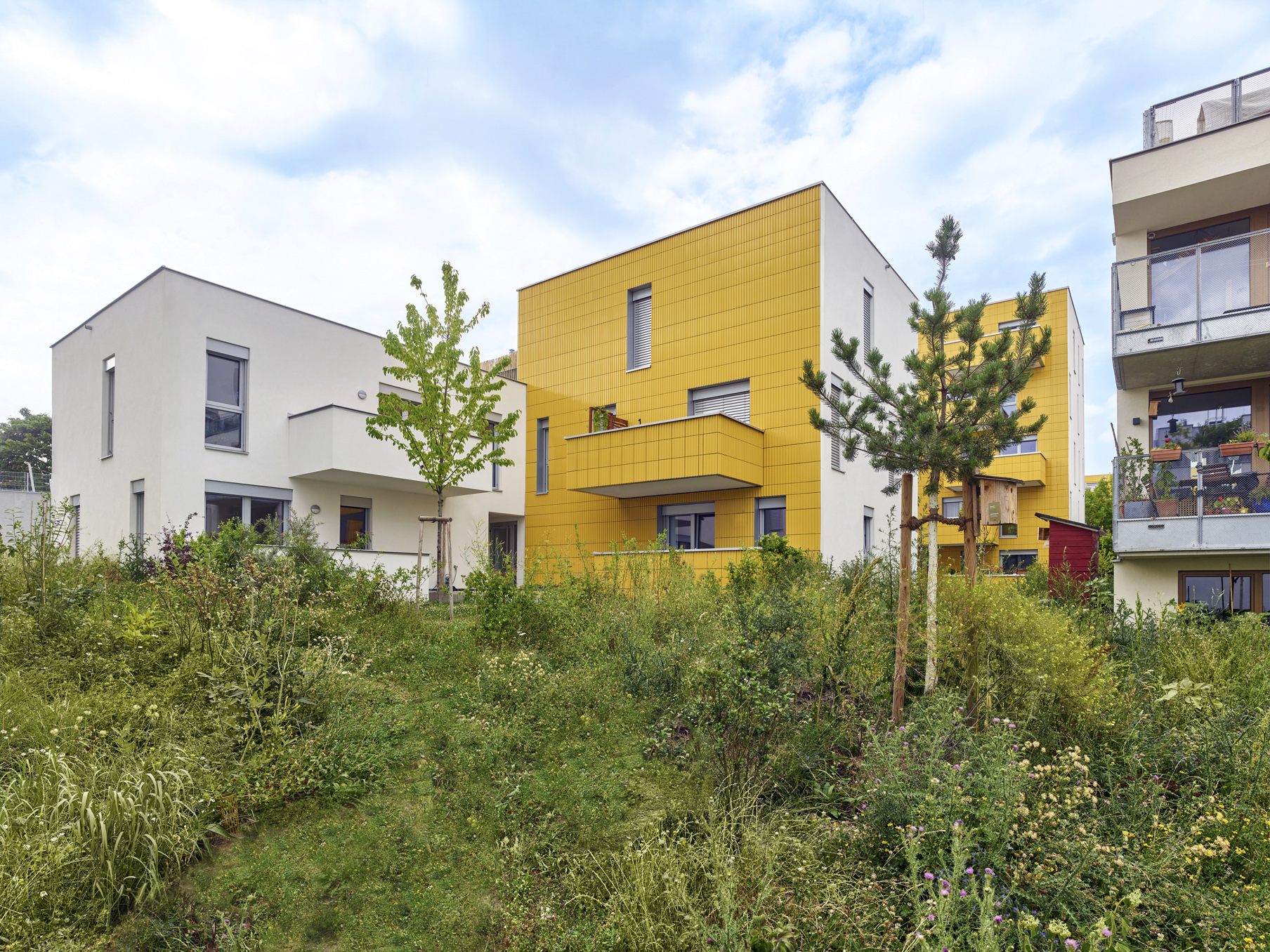 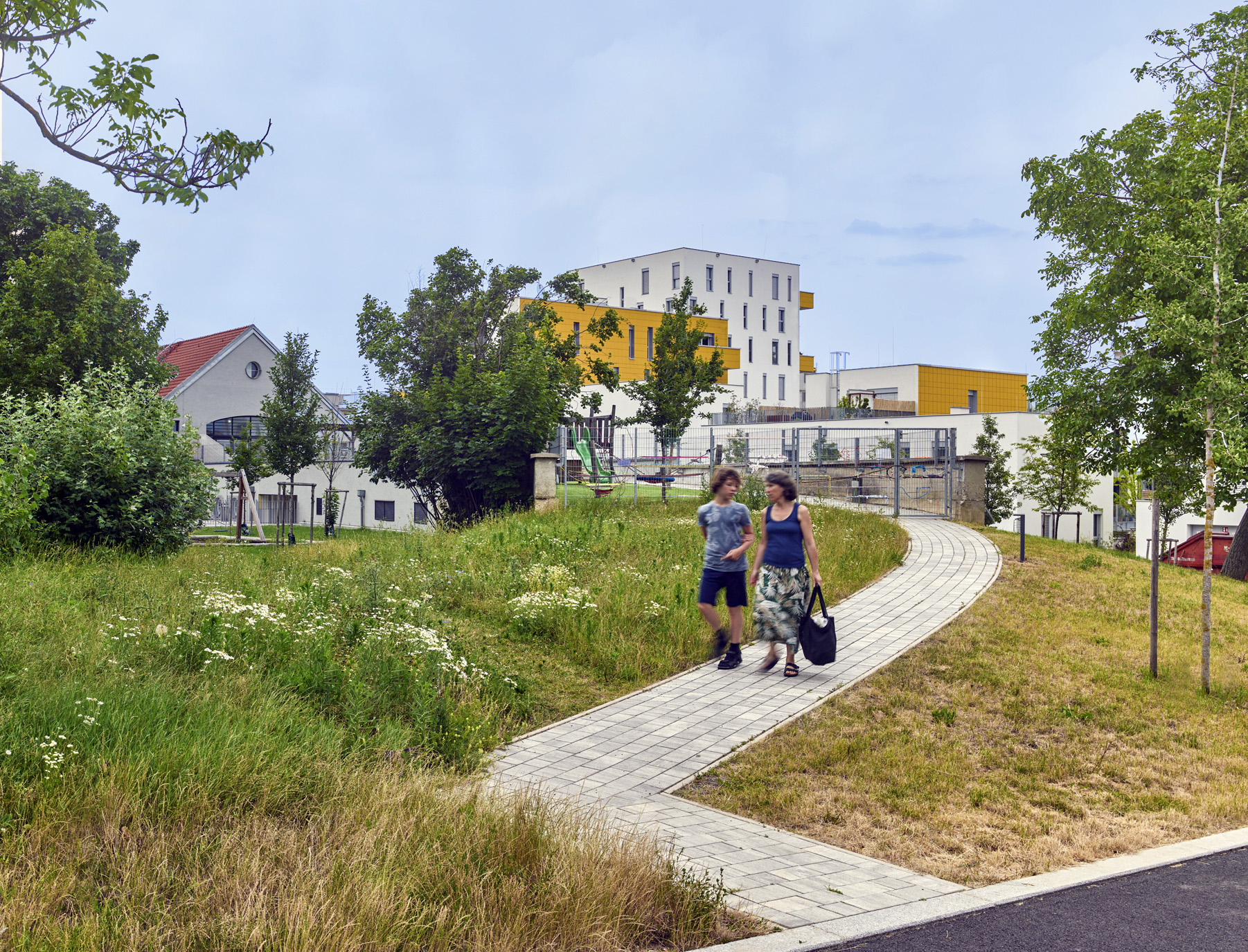