Multiplying and connecting agencies
By defining and connecting the future agencies regarding air, water, soil, flood, programmes, activities and users, and new layers of functions, it may lead to a balanced growth on these sites. The final design will be something more than the sum of circular urban economies. 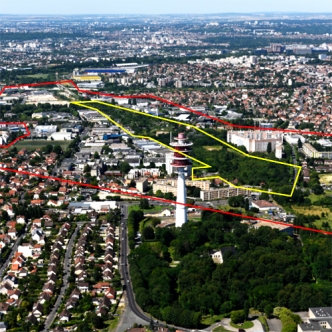 The eastern service road VDO (Voie de Desserte Orientale) was to be a connection to another motorway but has now been abandoned. The land that was set aside for this has been preserved from urbanization for the past thirty years. It is a vast ecological and land resource that raises issues of mobility and local and metropolitan access. The EUROPAN site is part of area occupied in the 1960s by a Portuguese refugee shanty town and corresponds to a section of the abandoned VDO project in Champigny-sur-Marne. The site raises questions on the future of a territory that to be conquered from its fringes, characterized by the backsides of mono-functional areas and neighbouring apartment blocks. How can this long neglected territory be reinvested to become a driving force of urban requalification and intensification? How can a neglected site be transformed into a productive area while keeping to a minimum the area of land to be constructed? What type of solution would preserve the ecological corridor while simultaneously introducing new uses and activities? How to design the city of tomorrow?

The communities and the public development agency EPAMARNE in partnership with the government are planning a development strategy linked to the new public transport line (ALTIVAL), which connects to the Grand Paris Express network. The city of Champigny wishes to set in motion requalification and change in the old production areas while building a lively front along the extended RD10 to which the ALTIVAL will be added in 2024. The goal is to make the site more attractive for economic investors and inhabitants in order to develop new jobs from a variety of productive activities and services. The development of this site is also an opportunity to restore east-west connections and a network of environmentally friendly transport between the edges of the former VDO while simultaneously highlighting the scenic qualities of a green corridor on scale with the intercommunal area Est Parisien.

In the 1960s and until 1972, the Plateau area was occupied by France's largest shantytown where a large Portuguese community had settled. The town centre is about a 30-minutes walk to the west. South of the Voie Sonia Delaunay, the VDO terrain borders the Mordacs neighbourhood and is currently abandoned. To the north, the spontaneous cutting up into small plots and gardens is an inheritance from the shantytown period. After its dismantling, business areas gradually developed from the 1960s until the mid-1990s. North of the Park du Plateau, the Grand Paris public institution set up a maintenance and storage site (SMR) for the Grand Paris Express (50,000 m2, eventually 450 employees). To the east, the Mordacs is a neighbourhood (6,700 inhabitants) of apartment buildings from the 1960s that was already undergone urban renewal.

The arrival of new metropolitan accessibility: Construction of ALTIVAL and extension of the RD10 are the main forces behind site renewal and the introduction of a diversity of uses in the vicinity of the public transport stations. Local investors want to develop a diversity of production, services and housing and establish entertainment, public spaces, services and shops along the future boulevard (RD10 extension) in order to make the sector more attractive.
Reuniting a fragmented territory: It is possible to organise urban diversity on the scale of a fragmented territory by connecting existing activities while strengthening the commercial role of the embankments and the reintegration of these lands into a dynamic project. The activities to be developed are mainly in the productive sector (small and medium-size businesses, adaptable flexible forms able to meet the needs of companies of various sizes and at different stages of their development).
Intensify the use of on-site resources: How can one reinvest a functioning area that has aging or obsolete buildings in a direction openness and reclassification? What types of public spaces will be able to connect to the city? How is it possible to allow the existing fabric to evolve and integrate new forms of mobility, service or sharing? How can the insertion of new activities architecturally, in landscape and environmentally preserve the use of a metropolitan green corridor?

Hello, what is the progress of the maintenance and storage site project? can we consider changing the shape of this SMR? Best regards

The SMR is currently under construction. It is a complex project with the Société du Grand Paris with a project management team in place. Of course you do not have the opportunity to intervene, this is not the subject of Europan.

Hello, Can we consider projecting a hypothetical mesh outside the perimeter of the strategic site? Best regards

Yes, candidates are free to develop thinking on a larger scale or in the longer term if they deem it relevant.