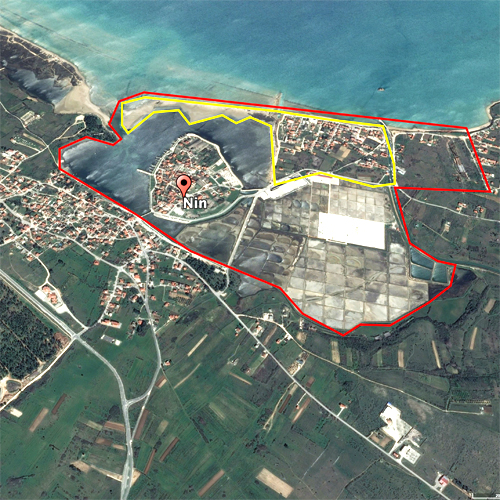 Site proposed by Ministry of Construction and Physical Planning, Croatia

Owner of the site Private and public owners

The morphology of the ground on which the city-island formed in the shallow lagoon contributes to the unusual imagery and distinguishes Nin as a city with one of the three salt ponds on the eastern Adriatic coast that have been in operation since ancient times. The rich historical heritage, the proximity of large tourist resorts and the city of Zadar, resulted in the fact that the population of Nin (2,750 inhabitants in winter) explodes fivefold in the summer months (14,000 in the summer), which is a record number in Croatia. This scenario brings a number of problems to the functioning of everyday life. Programming of the development and planning of new public public spaces are burdened by seasonal (tourist) population. The basic task of future urban development is to create a balance between the productive (4 summer months) and the unproductive part of the year. To be "more productive" for Nin means re-utilizing the city's public and private accomodation and facilities created under the pressure of seasonal tourism in the winter period as well. In Ždrijac resort - the strategic site perimeter - the problems identified at the city level are strongly perceived, making it a suitable site for exploring new trends in development.

The development strategy of the City of Nin 2016-2020 states: 'The City of Nin aims to develop a sustainable year-round tourism, based on: marine tourism (sun and sea), culture tourism (3000-year-old history), health tourism (medicinal mud), sport and recreational tourism (bicycling, kite surfing, wind surfing) and industrial tourism (saltworks, birdwatching). The reality is that in the following years the economic growth of Nin will be based on tourism, so one of the directions of future development of this core activity must be its adjustment to the contemporary needs as well as finding new programs to improve the tourist offer. The proclaimed goal of reaching all-year tourism is difficult to achieve without stronger support of the local population. Until now, the tourism was based on landscape and historical features that needs to be complemented by new products that will broaden the base of potential users. Residents of the city need to generate these new offers.

Because of its exceptional location (between the long sandy beach that has become a kite-flying oasis, ancient saltworks, an old town with a series of cultural sights and brick factories that are part of the industrial heritage) the Ždrijac resort in Nin has the potential to become a place where programs initiated by local population with the aim of year-round activity of urban urban life and events can come to life. These new programs should also improve existing tourist offer. In the resort there is a large number of holiday houses and flats so that this part of the town is overcrowded in the summer with almost no permanent residents in the winter. The built part of the resort is characterized by dense construction on small lots. With each newly built holiday home, there are less reasons for a tourist to visit Ždrijac. Investments in communal infrastructure are adapted to seasonal use, and good quality public space is practically non-existent.

Providing only seasonal accommodation facilities, as a support to 'tourist' environment (natural and cultural sights, beaches ...) creates a monofunctional housing ghetto within the city area. In the winter when the surrounding activators disappear and tourists leave, these parts of the city turn into dormitories. Small towns (villages) do not have urban power or social potential to resist the six months of hibernation. Summer modes of community motivated by profit completely disappear in winter. But small towns can be an appropriate place to explore and plan different sustainability models that we can call the summer strategy for winter life. Planning of all areas in the resort (public spaces, social standard buildings, infrastructure and recreational areas, catering facilities, including private houses for tourism) must have a clear off-season use.
Planning of reusable (and thus more productive) spaces, both public and private, can enrich the off-season life in the resort and encourage residents to create a different social and business infrastructure. The task is to create projects following contemporary (innovative) planning methods that will reinterpret the hybrid character of the resort in the program sense, and maintain the vitality of the settlement (the city), which is the basic precondition for sustainable development. If these activities make a small shift towards creating a different city, all actors can be satisfied. 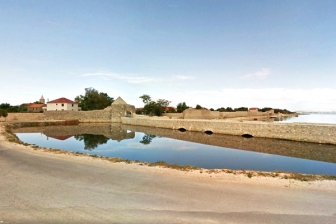 Historical part of the city - omnipresence of water 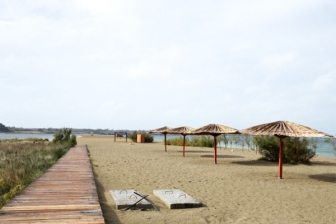 The beach during Winter 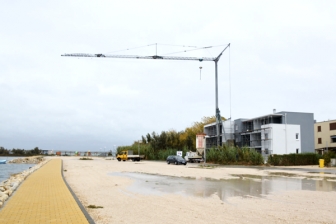 Is it possible to propose any intervention in all the plots included in the project site?

Is it possible to build on all the plots included in the project site?

Is it possible to demolish any of the buildings included in the project site?

Not currently; it is possible to propose to the local community to purchase a building whose demolition (according to the competition entry) would significantly improve the functioning of the area.

On the HR-Nin-PS-M3 map, all areas in the Zdrijac area are marked as „Areas to Develop“, which means that construction is allowed in accordance with the existing spatial plan (the parameters are given in HR-Nin-Text).

Is there any plot of public domain in addition to the n.1214?

How can we get to know the ownership of each plot within the project site?

Regarding the Ždrijac neighborhood, are we allowed to consider a new type of layout / plotting, without considering the existing houses and streets?

The new street / plot layout should be as close as possible to the existing one.

No, there is a shuttle service from Zaton tourist resort to the city center.

1.     Is the land intended for the construction of a parking lot (in the area called „west wing“) owned by the city?

Which side of the Zdrijac beach is intended for swimming? (towards the sea or towards the city)

Swimming is allowed on both sides, but due to the depth of the sea, the north-west side is more suitable.

Who owns the beach bar?

The city owns the beach bar; and in the summer students work there

Are the trees by the beach new? Why were they planted?

After the great flood in 2017, it was necessary to repair the beach so salt cedar trees were planted as their roots prevent wind erosion of the sandy ground.

Do you need to bring new sand to the beach every year?

No, approximately once in 20 years.

Do large boats or yachts visit this area?

No, the sea is too shallow.

Can underground levels be planned in Ždrijac?

Because of the groundwater level (sea) construction of underground floors is very expensive.

Is it possible to live here during the winter, is there any heating, is it too cold?

Residents living in Ždrijelac in the winter have heating (the winters are mild and do not last long). The problem of a small population is not caused by weather, but by the fact that most of the houses in Ždrijelac are holiday homes, whose owners live in other cities or abroad.

How were the houses built, who owns them?

Private owners (90% of existing homes) have built them up themselves with the help of smaller construction companies or bought them from their previous owners. Other houses (buildings with several apartments) are built by private entrepreneurs or businesses and are intended for sale.

What is the average value of holiday houses?

What do the residents of Nin think of a settlement that lives only during the season and is built only to "respond" to tourist needs?

All residents benefit from tourism, and as Nin has a small population (under 2000) there is not enough 'critical mass' for those who would advocate some other urban scenarios.

Economy of Nin - only in summer or winter? What to do in winter?

Is there any agricultural land in the area?

Yes; the agricultural area stretches from Nin to the Krka River.

Is food produced here sufficient for the local population? Does the food have to be imported?

No, Croatia imports significant quantities of food products. In the recent times, tourists' houses and hotels started to procure food products from local eco-farmers in order to further promote their services.

What do people who work in tourism during the summer, do during the winter?

Tourism is only an additional activity for some, and others make so much money during the season that they do not have to work in the winter.

How long does the tourist season last?

Is there a high school in Nin?

No, there is just elementary school.

We saw the school children who came on a school trip, can you tell us more about it?

Nin is an important historical city so a large number of children come to Nin on school trips.

Does Nin have a mayor?

Yes, although according to the number of inhabitants it should not (minimum 10000 inhabitants); it does because it is a historical city.

Do other cities also have the same problems as Nin - Population in summer / winter? Has any settlement already solved the problems, are there any examples?

Yes. There are positive examples of solving some 'problems', but there is no comprehensive solution.

Did the street layout of the Ždrijac village originate spontaneously or was it planned?

The street layout was planned.

What is the issue with connections between streets? Why aren't they connected?

The streets are not connected due to the complex property and legal relations, and insufficient 'pressure' of the inhabitants of the settlement to remove existing illogicality. It should be noted that this is a "living" resort only in the summer and that 'things work' with the existing street network.

Is the city authorized to solve spatial problems?

Is there a sewage system and is it discharged into the sea??

Sewerage is not released into the sea. At present, houses are connected to septic tanks, and it is planned to build a sewerage system.

Why are so many houses marked „for sale“?

In Nin there are several very active real estate companies and house owners decide to put their homes on sale, so if they get a satisfactory price they are ready to sell them.


CHANGING METABOLISM
A new balance must be found between the relations, processes, flows and multiple forces of the sites that are large and contain a variety of agents (human and nonhuman) with long- and short-term cycles, and far-reaching ecological, economic and territorial implications.

Multiplying and connecting agencies
By defining and connecting the future agencies regarding air, water, soil, flood, programmes, activities and users, and new layers of functions, it may lead to a balanced growth on these sites. The final design will be something more than the sum of circular urban economies.