From linear to circular economy

Characterized by a “linear”, obsolete or monofunctional economic approach, the site aspires to incorporate other resources and uses that create synergies and new potentials for interaction so that to create a circular system, catalysing flows and processes in a more integrative and efficient way. 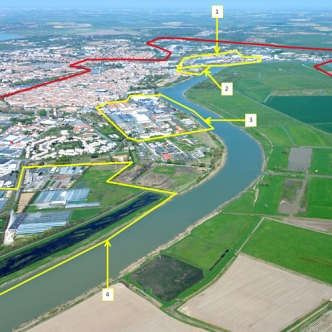 Commission after competition Landscape analysis of the study site; urban analyses and development programmes for the project sites.

The city of Rochefort-sur-Mer, founded in 1666 by Charles Colbert du Terron in marshlands, gave the Kingdom of France a port for the construction of its military fleet. This activity remained the driving economic force in the territory until the Arsenal was closed in 1927. However, an economy related to navigation and military needs has continued with production activities related to maritime commerce and aeronautics. In addition, an outstanding architectural and urban planning uniformity as well as remarkable buildings (i.e. Corderie Royale) within proximity of exceptional natural sites has allowed the city to develop a significant tourist trade. The four project sites are oriented towards the river and were in activity when the Arsenal was still functioning. Whether currently in full activity or partial, the goal is to allow their transformation within the framework of an exceptional geographic, environmental and architectural heritage while taking into consideration the risks from flooding of the meandering Charente River.

In order to maintain and develop territorial production, the Rochefort Océan inter-communal area has begun several ambitious development projects for three strategic cornerstones of the economy: industry (currently 20% of jobs), logistics (commercial port development) and tourism (natural and architectural qualities of the territory). This is taking place mainly on three large-scale operations located along the Charente River: a tourist project on the former Arsenal site, an extension and reorganisation of the Arsenal industrial zone and an extension to the commercial port. For these sites to evolve over long-term, better integrate their natural and built heritage and anticipate the effects of flooding similar to those of cyclone Xynthia, the Rochefort Océan inter-communal area is looking for resourceful, innovative solutions for the following four sites: Arsenal industrial zone, commercial port, a small park and a horticultural area.

The strategic site runs along the Charente from the transporter bridge to the suspension bridge, each of these connecting the two banks of the river. This site includes:
- On the right bank, from west to east: the Martrouts retail area, Fourrier business park, historic town centre of Rochefort, the railway station, marina, commercial port, Vacherie business park and single-family housing on the edge of town, then a nature area that extends to Quai de la Liberation in Tonnay Charente, the historic town centre of Tonnay Charente and finally single-family houses to the suspension bridge.
- On the left bank, from east to west: the suspension bridge, a site that includes vast marshlands, as well as an old pit for storing masts in salt-water pools and finally an area of single-family houses near the transporter bridge.

Productive areas that anticipate flooding
The risk of flooding needs to be evaluated over the entire study site and more specifically on the individual project sites where technical solutions are needed to control rising waters and/or productive activities found that are compatible with coastal flooding.
Use the architectural, geographical and environmental heritage as a resource for productive areas
How can a project site’s heritage be used to benefit the site and its productive activities while remaining coherent with the entire study site? The challenge is to take a site’s heritage and make it a «living» heritage focusing on uses compatible and coherent with the site’s activity.
Increase permeability between a working and a living city
Although the industrial sites need to be closed to public for security reasons, visual and functional links between these «working» and «living» areas are excessively limited despite their proximity. What physical, visual and functional connections could exist between the sites and their immediate environment?
Use mobility to connect sites
All the sites have parking and traffic issues. Europan competition is an opportunity to investigate new types of access and medium-term solutions to these problems. Beyond this functional aspect, it is also an opportunity to question how to reinforce connections between sites.

We have just recovered the.dwg files related to the site. They will be soon available in the complete file (early next week).

In the brief you mention that for the Commercial Port and the ZAC de l'Arsenal community has already begun work and wishes for visions and strategies for thos site.

Would it be possible to have some documentation of this process (and their outcome, in any) ?

Bonjour - Among the files made available post launch certain ones cannot be downloaded. Could you please let us know how to access them/ fix this error? Many thanks.

We are aware of the problem and are doing our best to fix it. By the weekend this should be settled.

Would it be possible to have a more detailed plan of the arsenal showing (i) location of companies, (ii) private vs public areas, (iii) areas closed-off to public for safety and other reasons, (iv) ZAC area?

The following plans will provide you with the requested information :

« FR-ROCHEFORT-PS3-M3-Carte des propriétés foncières » to that representated by the caption « Propriétaires privés (activités aéronautiques) », which corresponds to the STELIA aerospace rights of way.

Hello, would you be able to provide us with an occupation scheme including the names of the companies? Many thanks.

Hello, plans indicating occupants are available in the appendices of the site file:

We are doing our best to fix the problem. By the weekend this should be settled.

In the Journal of the city we found a infographic indicating the city budget for 2019. There are no indications on parts being spent on the Port de Commerce or Le Arsenal. Are there other budgets and how high might they be in 2020-2024?

We have added the financial breakdown of the port layout plan in the Rochefort / Tonnay-Charente complete file. Funding for the project is being discussed with the various partners, which are: State, Region, Department, Community of Agglomeration, City of Rochefort, City of Tonnay-Charente and Syndicat Mixte. It is difficult for me to provide more details.