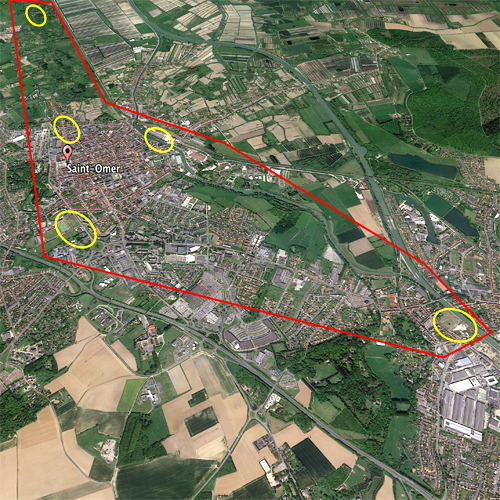 Owner of the site The municipalities

The study site spreads over five municipalities of the intercommunal region (Saint-Martin lez Tatinghem, Saint-Omer, Longuenesse, Salperwick and Arques), a terrain that runs from urban centre to Audomarois marshlands. The site is bordered to the west by a by-pass highway built over a period from 1980 and 2000 and to the east by a simple road along the riverbank. Isolated, often mono-functional areas and neighbourhoods punctuate the site. Local connections, sharing and productive connections need to be developed.
What connections and productive interfaces can be created around the notion of productive water (water and tourism, agriculture, industry, innovation, recreation, sports, etc.): marshland / city interface, sports facilities / educational facilities, Arques city centre / marshlands, Arques city centre /train station area. The reclassification of unused and existing or future abandoned sites needs to be reconsidered and set in motion in order to favour urban diversity, create continuity and urban and natural connections that are in harmony with these districts (at issue are city entrances, landscaping, reclassification of unused and existing or future wastelands).

An urban planning priority is to organise this urban area of 45,000 inhabitants and the nearby marshlands in such a way as to make it more attractive, creating short distances and sustainability. At issue is the question of mobility, particularly the connection between historic centre, industrial city and residential areas; reconsider the relationship between urban planning and mobility, enhance public spaces and re-examine the connection between city / marshlands so as to preserve the area's natural wealth.
A network of project areas has been identified for urban renewal and improvement of public spaces:
1. Holiday village (VVF) in Salperwick;
2. Saint-Martin lez Tatinghem / marshland interface including the Maison du Marais site, Port au Lait Battu and the "Bloc de 10" site with park-and-ride lot;
3. Fort Maillebois neighbourhood, sports grounds and high school along the axe Saint-Omer/Longuenesse;
4. Arques city centre and industrial wastelands; 5. Saint-Omer railway station neighbourhood and Plan Guide de Composition Urbaine (citizen-participatory analysis).

The strategic site concerns five communes in the Pays de Saint-Omer inter-communal region, namely the historic city of Saint-Omer, the industrial city of Arques, the residential communities of Longuenesse and Saint-Martin lez Tatinghem and the rural community of Salperwick. These five municipalities are in direct contact with the Audomarois marshlands.
This area is marked by a diversity of landscape entities at the junction between city and countryside, between Audomarois marshlands and the historic urban centre. The project sites identified for urban renewal are in direct contact with the boulevard. They are either existing or future wastelands (holiday village (VVF), industrial wastelands, abandoned parking lot) concerning mutation and regeneration or sports facilities and public green spaces.

The issues confronting these isolated project sites, their use and future, involve recreating connections and productive interfaces between the sites and around the concept of productive water. These issues have to be placed in perspective with territorial development around productive water: water and tourism, agriculture, industry, innovation, recreation and sports; connections and exchange between individual project sites. More specifically, this territorial development around water questions the ability to benefit all inhabitants, encourage social cohesion and open up isolated areas to the outside. Social inclusion of the city's underprivileged neighbourhoods needs to be taken into consideration (Plaine des Sports and Fort Maillebois) to ensure the complementary nature of spaces, especially associative and institutional sports facilities as opposed to free sports along the canal. This strategy is expected to add the issues of public space, renewed social practices, landscape and ecological continuity to a progressive discussion on Audomaroise identity.
More broadly, the program questions the very model of a wetland city of the 21st century. What place is water going to play in productive systems? What will the effects be on landscape, lifestyle and public space? How will anthropized environments and natural environments fit together? What is the future status of water going to be: productive water, beneficial water, restorative water, natural water, etc.? 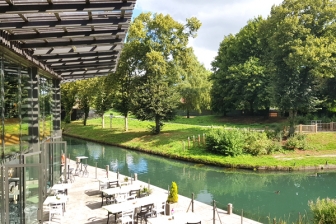 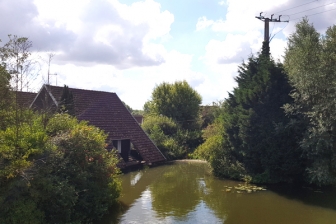 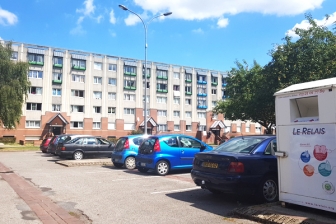 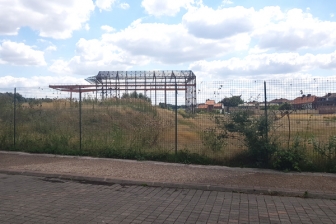 
IMPLANTING
The challenge for cities to be both productive and sustainable is to interlink resources, mobilities and conditions of fairness. There are two aspects to implanting new dynamics or reactivating resources such as urban farming and educational, research or creative forces: productive milieus and productive uses.

Productive milieus
This is the level where a natural, cultural, social or economic environment is implanted or revitalised symbiotically, by contrast with the architecture of objects or the urbanism of technocracy. So what is needed is to activate human and nonhuman resources and an ecosystem of partners, while at the same time paying attention to integrative values between nature and culture.