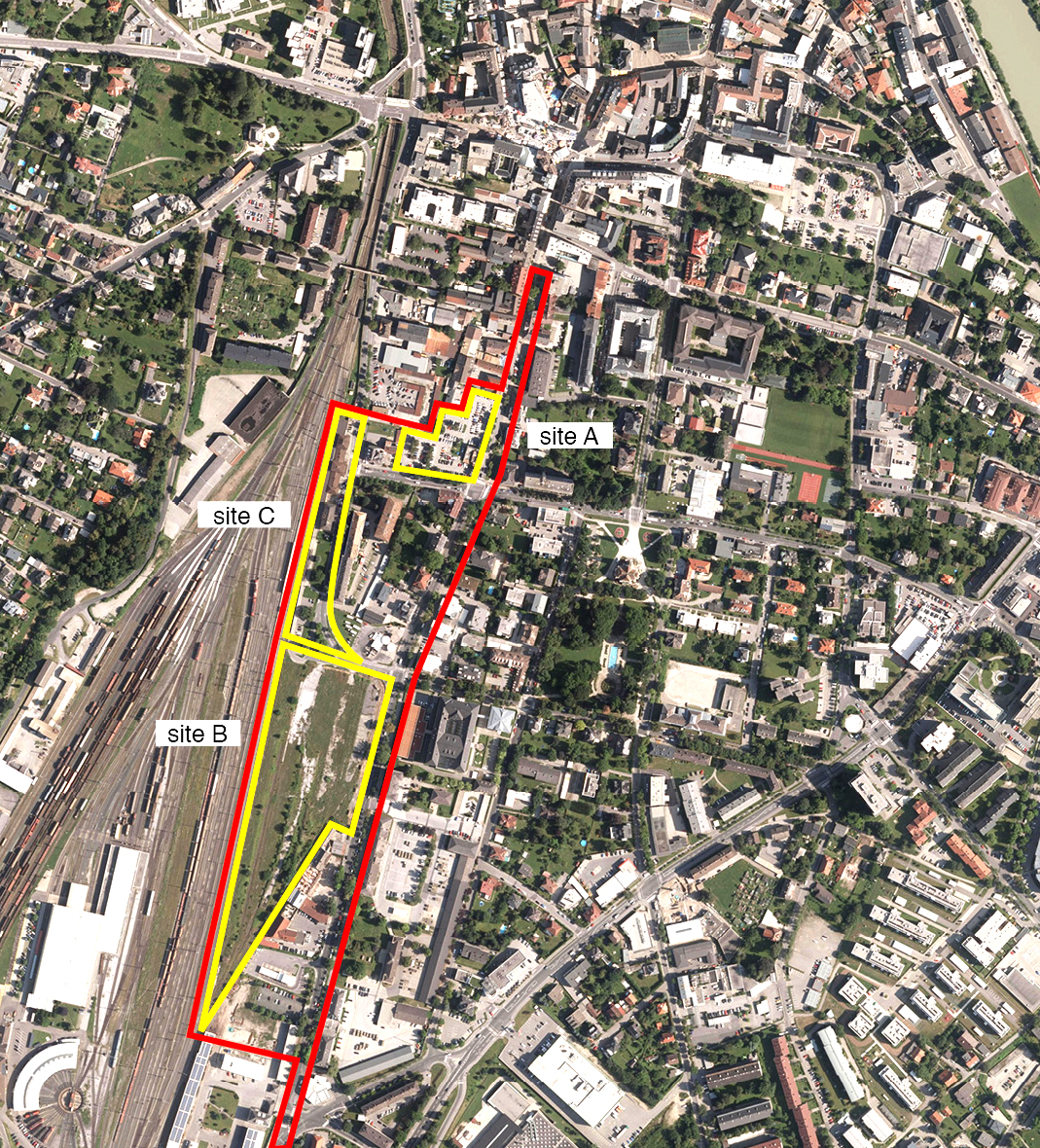 Site proposed by City of Villach

Owner of the site City of Villach, ÖBB Group

Villach’s E15 site negotiates an exciting position between up-and-coming, diverse suburbia and the lively, historic city centre. Its location is the gap between the heart of the old town with its cafes, little shops and narrow alleys and suburbia with its schools, army base, climbing centre and industrial sites.
Unique potential lies in the regional railway station which is part of the ambitious development area. Though currently only used moderately it possesses the powerful ability to branch out into the region, enabling access to and from the city and mediating between different speeds. Paired with a visionary mobility strategy, innovative synergies between production, recreation and housing are required. Promote the site as a hinge and unfold an exceptional, experimental pilot project for Villach.

Villachs’s urban development concept proposes the West Railway Station Site (E15 site) as one of five target areas for development within the next few years. The ambition of the city and the site-owner is to establish an exceptional, hybrid, innovative urban quarter, which reaches out to and anchors its surroundings.
Its strength is its immediate proximity to the old town and the existing railway station. Excellent access to the region and the city is at hand and the cycle-path-network that runs along the site enhances this. Soft mobility will be a key driver for this unique location and needs to be dealt with boldly.
Make use of the fact that approx.1500 people pass through the site on a daily basis.

The E15 site consists of two parts, which are not directly connected but are in close proximity. The first part (site A) is only five minutes’ walk away from the very heart of the city – a prime location! However it finds itself on an ‘imaginary’ threshold between what is perceived as the in- ner-city-core and the suburban area. Its current function as a car park enforces this image. The second, bigger part of the site (B) is an urban wasteland - currently also used as a temporary parking lot. It is located next to railway tracks and a railway station. Embedded into a neighbou- rhood with many schools, sport facilities and an army base, it has great potential to become a vibrant hub.
A strategic use of the interplay of these two sites will be crucial.

Seemingly opposing forces, such as the surrounding region, the imme- diate area of the inner city, suburbia, etc. open up a vast field of potential synergies. Many fascinating threads need to be picked up and the pro- ject offers the compelling chance to knit them together. With the city’s ambition to introduce more vibrancy and relevance, production and its related fields will provide a major driving force to implement a new iden- tity and boost the area. The creation of an autonomous quality within a new hybrid setting is desired. The main challenge is to strategically connect the ‘valuable’ parameters at hand - such as proximities, mobility and flow of people - into a mixed spatial and programmatic setting which anchors the site. It’s the perfect matrix for a manifold of production facilities to settle here. The city wants to implement a new mobility strategy; its origin should be at the E15 site. Excellent accessibility is a given. The city wants to see a hybridity in housing, production and recreation and asks for an innovative approach to implement a contemporary identity. A unique testing ground for a new vision is at your disposal – go on and FILL THE GAP! 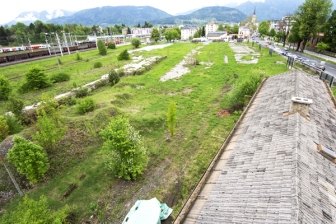 View of Site B from the South 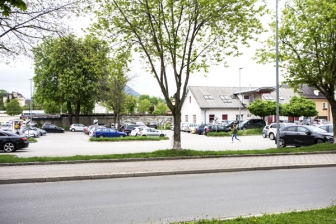 View of Site A from the East 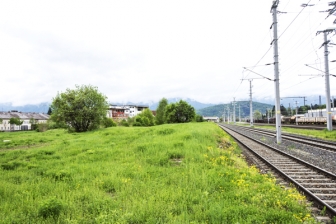 View of Site B - from the North 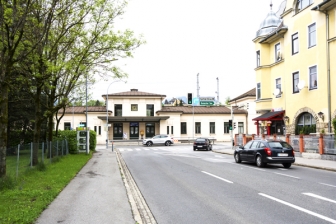 Is there a suggested amount of building area that should be met in addition to the 80:20 and 50:50 functional mix?

No, it is up to the team to propose that.
"There is no required density - the quantitative parameters rather need to be developed along with spatial qualities.Therefore the question of density should be answered together with the typological approach as well as the height conception. It will be necessary to test certain heights and their integration into the existing context in order to create urban concentration as well as to mark particular zones of importance. In context of the zoning concept detailed datas of density, floor area and ratio have to be indicated." (F.2.5 Building Development ff und F.5.3. Architectural Design and Landscape Design)

The private building on the SE corner of Site A is to be 'neglected' in the programme. What does this mean?Should the building be preserved or removed?

The building is structurally in a very bad condition and is meant to be demolished in the near future. Hence the building doesn’t have to be taken in account for the europan competition.

What's the expected duration of the lease contract between ÖBB and the charity organization Westbahnhoffnung hosted in site C?

There is no fixed absolute height for buildings in the city centre of Villach. In the textual development plan 4.5 floors are mentioned, which would sum up to a total height of 17.50metres (4,5 x 3.5 m = 17.50m). A new development plan is usually set up in accordance with the architectural advisory board and is project-related. However, more than 6 floors, about 21 meters, are not possible.

Could the noise barrier in site C be removed?

The current noise barrier along the traffic station cannot be removed. Next to noise-reduction, it prevents illegal rail crossing, a danger not to be underestimated (e.g. pupils who are late for the train).

The strategic site perimeters is very often adjacent to existing buildings. Is there a minimum distance we should keep?

Based on the results of the competition, a partial development plan will be made. Basic parameters such as light, ventilation, permeability and a "feeling" for distances must be fulfilled. There should be no disadvantages for existing and new inhabitants. The solution must comply with the urban setting of Villach.

Could you clarify the building ban for the 12m restriction zone (Bahndamm)? Are only buildings forbidden or also roads/bike lanes. And how about the air space above the 12m?

The legal basis to this question is EisbG 1957: In principle non-railway related facilities of any kind are prohibited. Cycle paths, for example can be built within 12 m, however all building activities within the building prohibition area require additional planning approval according to railway regulations. This is also valid for the air space of the building prohibition area.


CREATING PROXIMITIES
In the physical space of the city, but also at temporal and actors' scales, it is about establishing proximities between living and working both within residential areas and between residential areas and monofunctional production zones. It is also about rethinking the transition between high-speed metropolitan mobility and the low speed of neighbourhoods.

Third spaces in-between
A third space is a new space inserted between housing and production areas that can catalyse the transformation of current production cycles by creating synergies with urban territories and everyday life. It can be located in residual spaces within neighbourhoods, between existing monofunctional zones or emerge from recycled urban fabric.