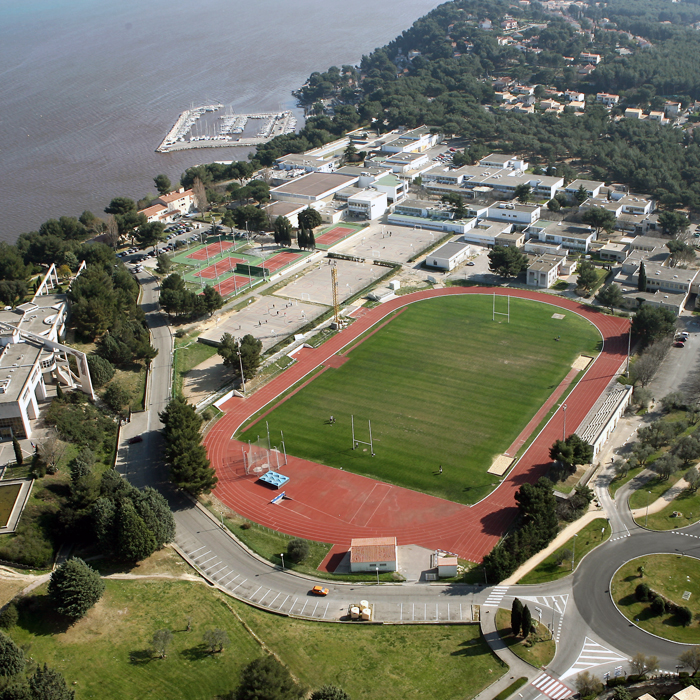 Istres is a town in the recently created metropolitan area of Aix-Marseille-Provence (AMP); it was originally an old Provencal village looking down over the lagoon, Étang de Berre. During the end of the 20th century, Istres saw its population grow considerably under the auspices of a new town that spread out like a blanket, with a new town centre and residential areas (clusters of houses, small buildings, etc.), but also with a large number of public amenities, among which the ECC. The town wants to find a new use for the ECC’s ‘Alain Savary’ secondary school, which is going to move elsewhere, to preserve its experimental and working-class character through a project of a ‘third place’, a collective place, for learning. What is more, the ECC is soon to benefit from the construction of a new multimedia library and the installation of a ‘Maison de l’Energie’ energy centre. Down the slope on the banks of the lagoon, a project to renovate the marina is underway, with a maritime shuttle to provide a fast link to Marseille-Provence airport, thereby opening up the town.

‘Les Heures Claires’ educational and cultural centre (ECC) is located in the South of France, in the city of Istres, which has a population of nearly 43500 inhabitants. Benefiting from its proximity to the agglomerations of Aix and Marseille, Istres is today part of a region strongly marked by the establishment of industrial-port sites and constitutes the center of a life basin still relatively autonomous from the rest of the department, both economically and in terms of services and facilities.

‘Les Heures Claires’ educational and cultural centre (ECC) was built in the 1970s by Atelier de Montrouge, with ideas of sharing, of collective reflection and of embracing multi-disciplinary collaboration. The ECC has been listed as 20th-century heritage. The Istres educational and cultural centre ‘Les Heures Claires’ is also part of the dynamic of development of the industrial area of Fos-sur-Mer and the large-scale influx of workers. Today, the ECC houses an ‘open school’, arts and sports amenities, a music school, a multimedia library, a dance school, around a tree-lined avenue ending in a terrace and belvedere looking over the Étang de Berre lagoon.
It is a matter of questioning the place of the CEC in the urban landscape and in contemporary lifestyles. Guided by a certain idea of utopia, it is possible to question today the innovative architecture of the Atelier de Montrouge, by rediscovering the virtues of modular, evolutive and adaptable architecture. The relocation of the college will enable a reflection on this 20th century architecture, and to test its possible reinvention.
Based on the idea that relationships between art, sport and education constitute the basis of a society that is more fair and more open, the ECC today needs to rekindle its utopian dimension and build on what is the force of the site, sharing and collaboration, education and creation, while also clarifying its position within contemporary transitions (digital, anthropocene, participative democracy, communal, etc.)

I would like to know if dwg files will be available in the future or not? Regarding the site, could we know the reasons of the move of the college. Thank in advance.

The city does not have DWG files. Regarding the site, the college will move because it no longer meets the standards (safety in particular) of current colleges. The college should move in the next 2 to 3 years, but nothing is decided at this stage.

What is the status of the new Alain Savary College project? Can we have details on the causes of the move?

The college will move because it no longer meets the standards (safety in particular) of current colleges. The college should move in the next 2 to 3 years, but nothing is decided at this stage.

What is the status of the new mediatheque project? Is the old mediatheque building extended or fully replaced by the new one? Why was the new one planned?

As far as the mediatheque is concerned, the metropolis is in the preparation phase of consultation with companies; the building permit has been issued, and the fitting-out work could begin at the end of the year and the structural work in January. The future ex-mediatheque library will be a memorial space dedicated to the history of the men and women who have left their mark on the history of Istres, but also the site of a permanent digital exhibition retracing the major periods that made up the city and its immediate environment (Etang de Berre, Gulf of Fos, Plaine de la Crau, etc.). The new functions of this equipment can be linked to the new mediatheque through the Resources and Memories department. The archaeological collections of the former Museum of Istres (closed due to cracks in the floor) will also be housed there. Interior fittings are planned but no demolition is required; the new metropolitan mediatheque will not impact the buildings (classified as 20th century heritage), and will take the place of the current car park/roundabout.

Are there any specific conditions for the submission like specific scales for the plans, maximum number of images, internal composition of the panels, etc?

Digital submission is compulsory. It includes the 3 A1 panels (visual elements), a 4 pages illustrated text (max) explaining the link between the project and the theme of the ongoing session as well as the implementation and building processes of the project, also documents proving the eligibility of the team members and finally documents for the communication of the project.

For details of the content and technical characteristics of the items to submit, we invite you to go to :

The document FR-Istres-Ps-t2.pdf defines “Les Heures Claires" as heritage of the 20th century. However it also states that the buildings are not protected. Can we therefore modify the buildings, for example by partially demolishing them or increasing their height, or is there a specific regulation that requires the buildings to remain as they are?

The CEC is indeed labeled as 20th century heritage but it is not a classified or protected building. Nothing forbids the modification of the buildings in height or their partial demolition outside the PLU regulations and the strong attachment of the Istréan population to this part of its history.

Hello, Could we have more information on the structural principle of the college? (Plans, sections, axo, archives ...) Why the house of energy is no longer relevant? To what extent should we intervene on the former media library? Thank you in advance. 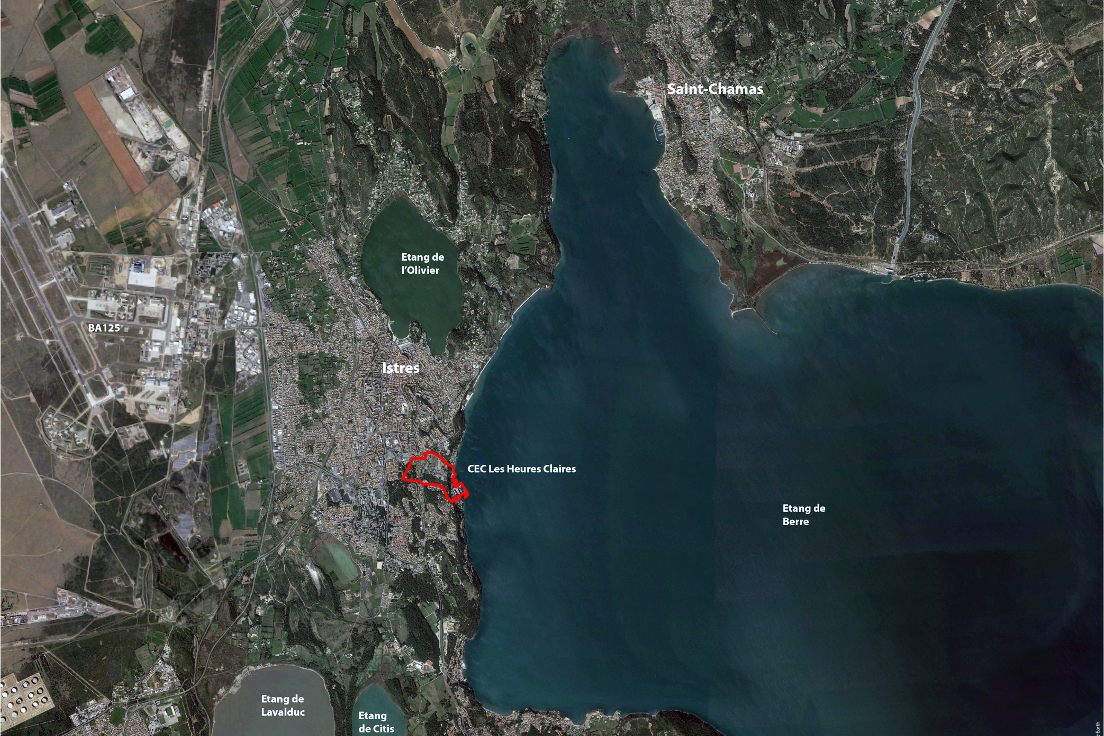 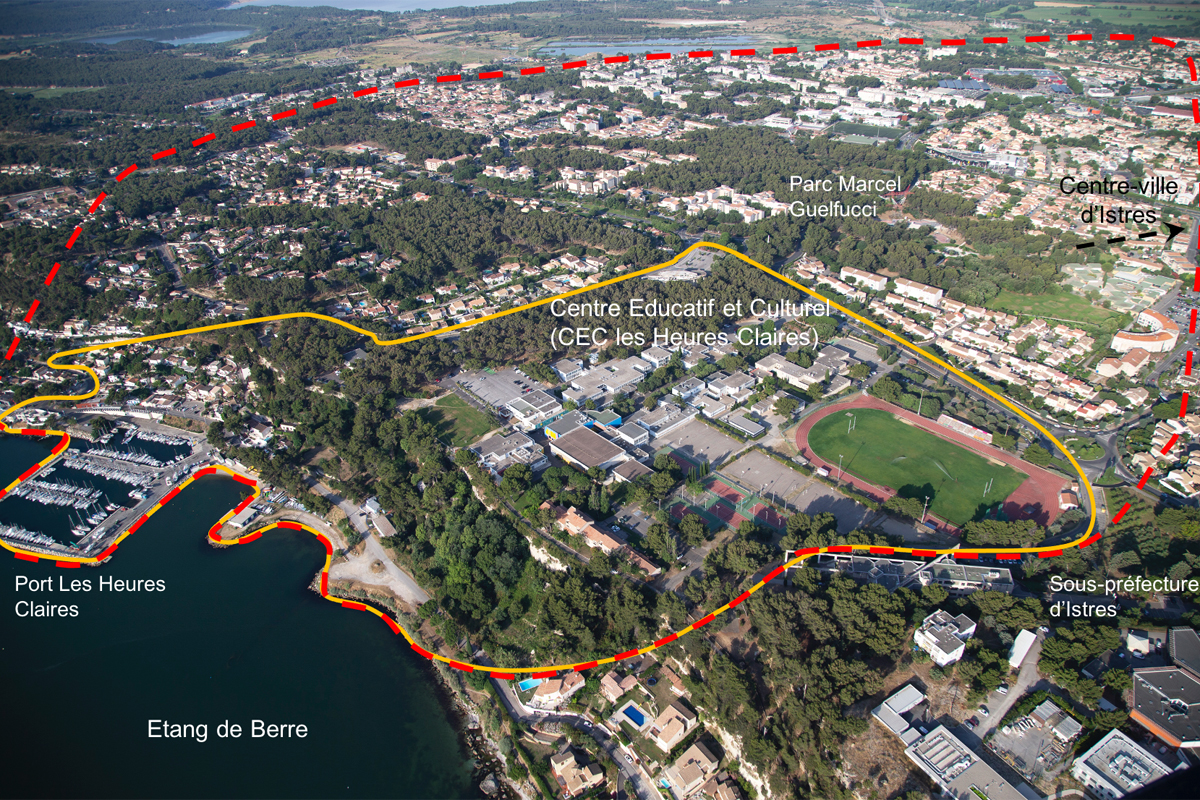 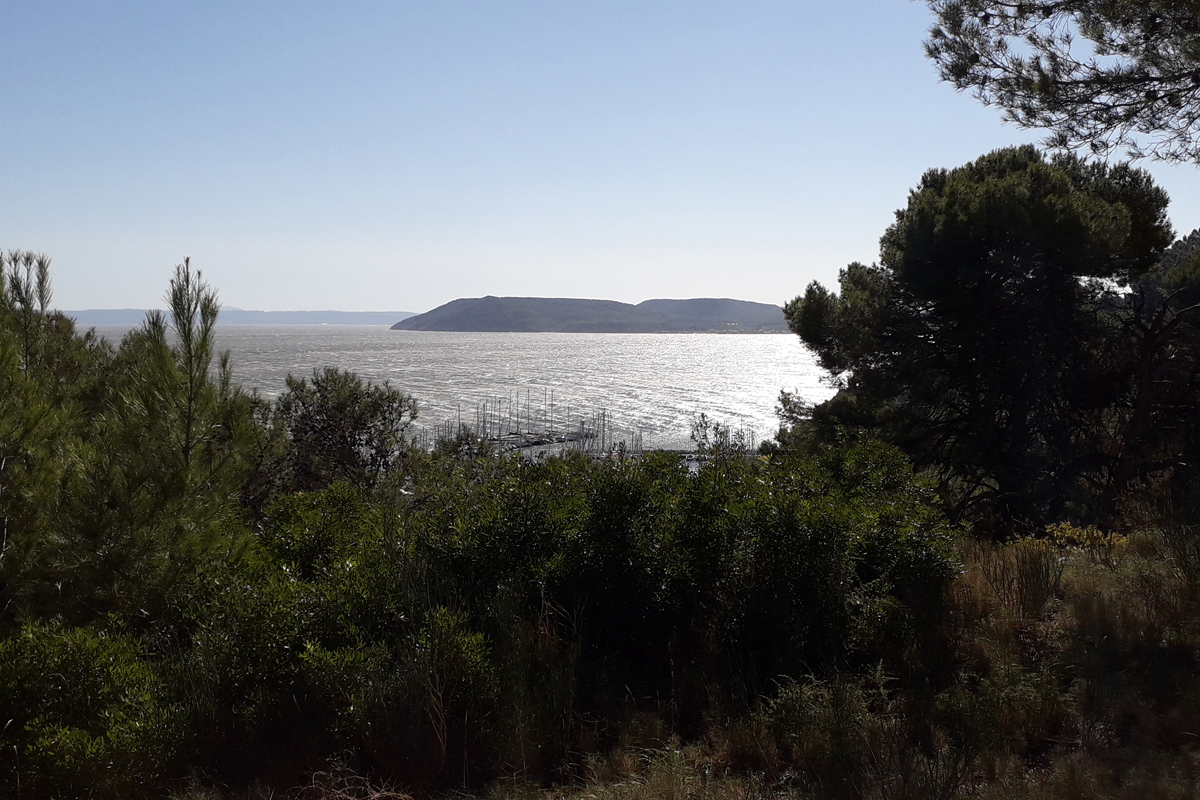 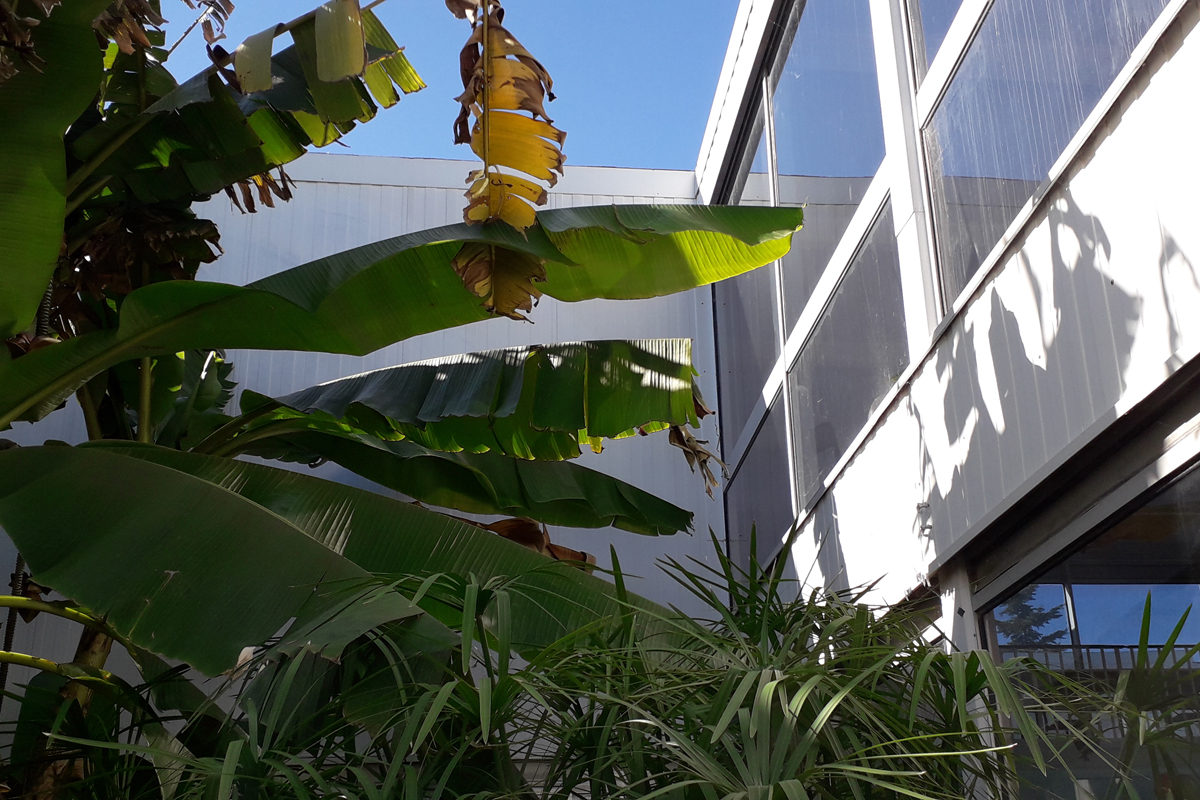 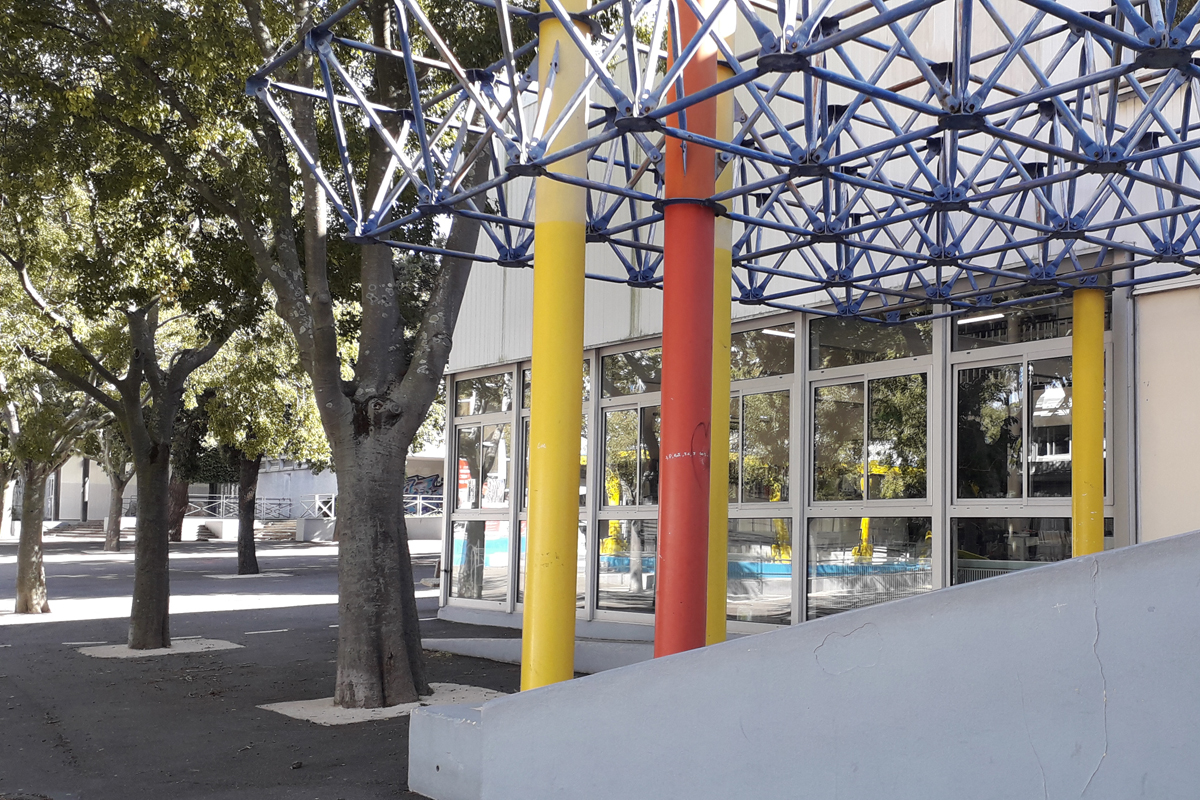 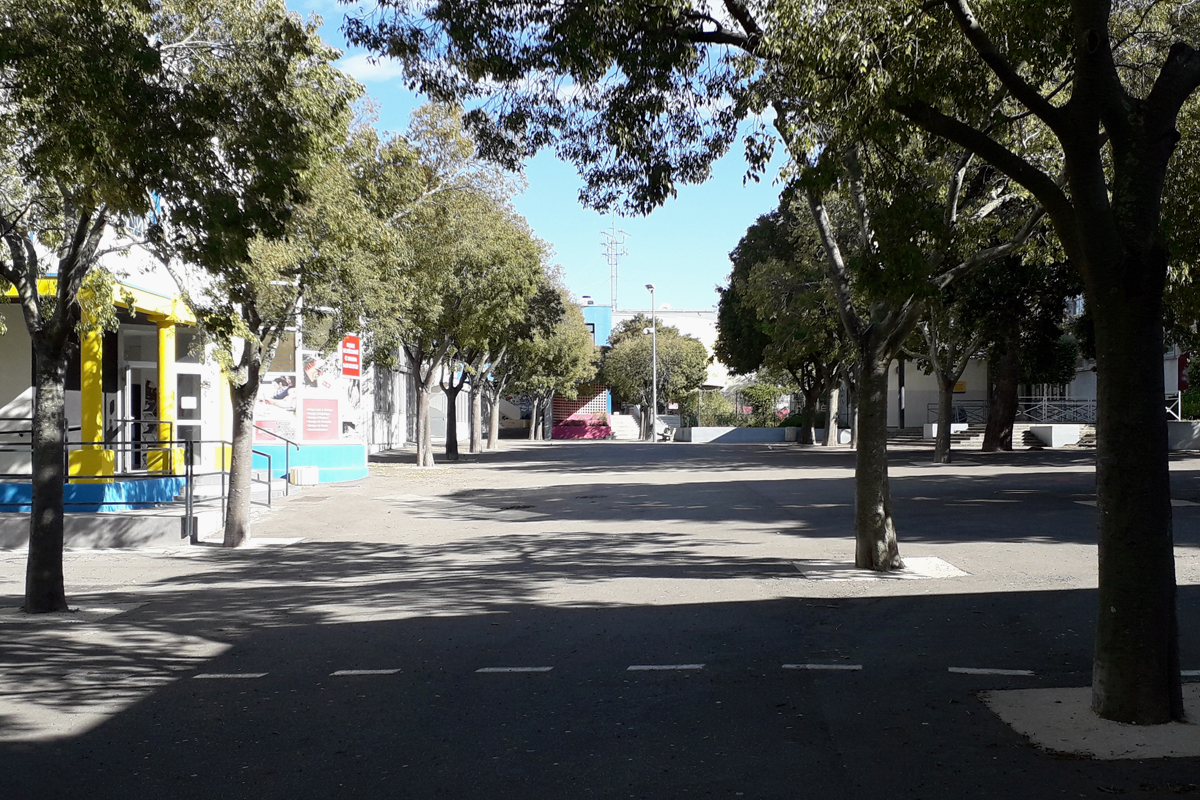