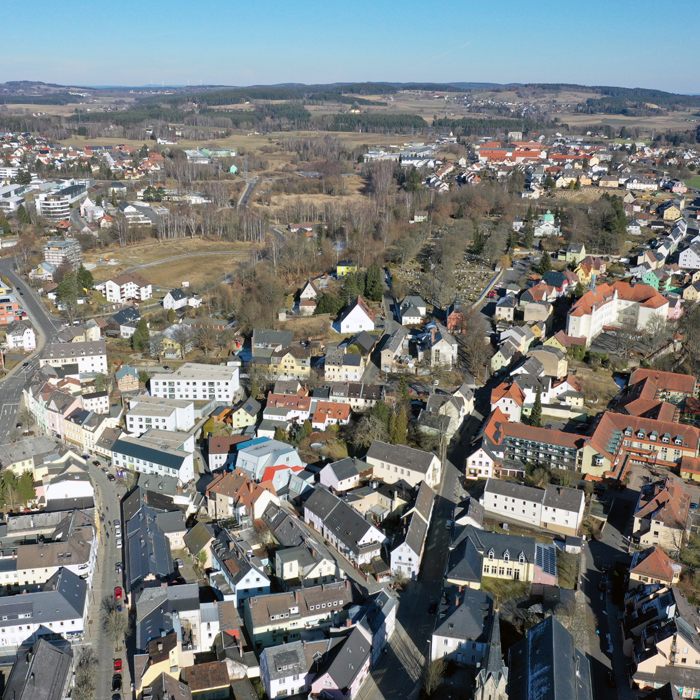 The town of Selb, with a population of around 15,000, is located in the administrative district of Upper Franconia in Bavaria. Due to demographic and industrial structural changes in the local economy – hitherto traditionally dominated by the porcelain industry, which has largely ceased production – the town has been shrinking continuously. Since the end of the 1970s it has lost about a quarter of its inhabitants. In recent years, however, a reversal of this trend has been achieved through changes in the offerings of the business community and active urban planning interventions, some them based on results of previous Europan competitions.

The project site is close to the town centre, but it is in decline, with a number of vacant buildings, a rather undefined public space and a streetscape that has nothing to offer pedestrians or bicycles.
New strategies at all levels (architecture, public space, mobility) are needed to reactivate the area and integrate the residents into the process.
For scale level S – i.e. the specific project ¬– the area of the eastern town centre of Selb is to be redefined.
For scale level M, the connections to neighbouring urban areas are to be established, and ideas for integrating and upgrading traffic and open space planning are sought.
This project is looking for answers on an urban planning and architectural level and seeking a method for developing a future-oriented project. The site of a former brewery could be one pilot location for transformations, including social uses and innovative forms of housing. What else could give momentum to innovation? What concepts for follow-on use could be implemented, what programs could be integrated? How can the public space be upgraded? How can residents be involved in the process of change? What could be the pilot projects in this process?

The aim is to add new functions to the project site, and in particular to the buildings already mentioned that require redevelopment and are currently vacant and underused. Here, the focus is on developing innovative and sustainable mixed housing concepts suitable for all generations, taking into account the aspect of accessibility. Moreover, these housing concepts should simultaneously help to strengthen the role of employment in the district. In addition, the project site needs to be linked to the town centre in the best possible way by developing attractive connections. And the competition entries should take into account the small-town, non-metropolitan character. There is an opportunity here to develop new and, above all, innovative typologies of open space, designed for sustainable, flexible uses and diverse (small-town) life.
In keeping with the Europan 16 task ‘Living Cities – Lebendige Städte’, design contributions are sought that demonstrate innovative ideas and processes and deal with the main topics of the ‘dynamics of the circular economy’ and the ‘dynamics of integration’.
Preparatory studies will be carried out in 2021 to investigate the prevailing social, structural, and urban conditions on the project site. The approaches to solutions that result from the competition will become part of the formal urban redevelopment goals for this area.

Can floor plans / sections of the both the properties owned by the city and those that the city is planning to acquire be provided?

What is the demographic structure of Selb and what would be the most common size of a household? What kind / size of housing is needed?

The flats should be suitable for all generations.

Can the desired housing mix be described in more detail?

In the local housing market, two- and three- and four-bedroom flats are in particular demand. The interconnection of small to larger housing units would also be helpful. In principle, proposals for new typologies are also welcome.The question has been passed on to the city and will be answered soon.

The street "Kirchleinsgrund" currently divides two of the three main project sites. Is it thinkable to re-plan the sites including the revision of the street?

The development function must be maintained, otherwise the existing road can be changed. However, the routing (water supply lines, etc.) must be taken into account.

Who do we plan for? Is there any notion of who the future tenants / users of the wider area and / or the specific buildings are supposed to be?

The main player is expected to be the municipal housing association. Accordingly, it is mainly a matter of rental space

The properties in question are Obere Bergstraße 8, 10, 12, Von-der-Tann-Str. 2 and Wittelsbacherstr. 6.

What is the city's mobility concept? Can this be made available?

What are regional raw materials?

Is there any interest in reactivating the use of the brewery as an economic factor?

What is the demographic trend in Selb?

Can survey plans and floor plans of the existing buildings (including the upper floors) be made available for the properties Friedhofsplatz 1 / 1a, Obere Bergstraße 8 / 10 / 12, Von der Tann Straße 2 & Wittelsbacher Straße 6? Without this planning basis, (partial) preservation of the building fabric is completely ruled out.

The buildings Obere Bergstraße 8, 10 and 12, as well as Von-der-Tann-Str. 2 and Wittelsbacher Str. 6 are definitely scheduled for demolition. This was the result of an inspection and examination of the building fabric. The property at Friedhofplatz 1 and 1a is privately owned. Access is not possible.

Does current ownership (municipal, planned municipal acquisition, private) need to be included in the planning? If so, to what extent?

The information on the publicly owned properties only serves to indicate the possibility of rapid realisation. However, private land can also be overplanned.

Are there already plans to revitalize Lorenz-Hutscheinreuther-Strasse? Are there any plans for the acquisition of land / houses there by the city?

There is currently no revitalisation concept for the Lorenz-Hutschenreuther-Straße. An acquisition of houses by the city is currently not planned, but is possible for the future.

How important is Lorenz-Hutschenreuther-Strasse as a traffic axis? Would it be possible to close it or implement measures to calm traffic?

Lorenz-Hutschenreuther-Straße serves as the main access road to the crematorium (regional) / cemetery and is particularly busy during the numerous funeral services. And: many primary school children are brought to the Luitpold School by car.

Behind the houses in Lorenz-Hutschenreuther-Straße are various garages and parking spaces. Who owns these spaces? Would they be sufficient for the residents?

I assume that the facilities along Cemetery Road are meant. The garages and parking spaces on private land are sufficient. The parking spaces to the north of the cemetery road are urgently needed for cemetery visitors.

Which are the largest employers in Selb / the wider region? Is there a particular trade that is especially typical for the region?

The porcelain industry is particularly typical of Selb, although it is becoming less and less important. Today, the largest employer is a company from the automotive industry (supplier company), but it is now also active in medical technology. Other important industries are mechanical engineering, measurement technology and plastic injection moulding, as well as passive components in the electronics industry. The hospital is also an important employer, as are the offices of the city administration, the federal and border police, customs administration and the Centre for Family Support.

Are there any special features under planning law in the planning area?

No, there are no special features under planning law. A dense construction method can be assumed.

Are there any trees worth preserving on the site?

Sustainable building materials should always be given preference.

Is a certain number of parking spaces required for residential/commercial units?

In general: one parking space per residential unit. In the case of commercial premises, depending on the use, more, if necessary. Parking spaces in public spaces can also be redeemed. There is also the option of partially waiving the parking space obligation for senior citizens' flats.

Is the ground condition suitable for underground garages?

Is the renaturation of the Erkersreuther Bächlein possible and are there any plans for its course?

Renaturation is possible, unfortunately there is currently no documentation on the underground course.

Leerstand EG means that the ground floor remains empty to be considered for a new program with the rest of the building with its present use and purpose? Or, in contrast, have a different meaning or approach?

Dear participant, could you please specify your question?

Do the places designated as Leerstand involve that we are free to propose a new use and program for the entire building? Do we have to respect its entire natural construction and typology?

Yes, there is the possibility to propose new uses and develop a programme.

Is there any maximum height for the new volumes? In addition, should we have to consider a minimum legal distance between the building and the plot borders?

The maximum height is determined by the requirement to blend in (consideration of the existing buildings). The Bavarian Building Code applies to the minimum distances.

Are we allowed, in terms of the general idea or approach, to expand the proposal including the surrounding plots? As the Project Area is big compared with the plots hosting the demolished or reprogrammed buildings, the council may seek a more integrated proposal involving these plots surrounding the main intervention areas.

Yes, proposals can also be developed for the project area.

In the video of the site inspection of this year's EUROPAN competition area, we have taken note that the city of Selb does not consider a redevelopment of the buildings with house numbers 2 and 6 in the "Von-der-Tann-Straße" to be profitable.

Nevertheless, we would like to take a closer look at the floor plans of these buildings in order to consider a redevelopment concept if necessary. It would be helpful for us if you could make the plans for these buildings available on the EUROPAN website, like those for the brewery. Buildings such as the "Bellevue di Monaco" in Munich, which was originally considered a hopeless case, show that cost-effective refurbishments are possible and can also create added value for a neighbourhood.
https://www.sueddeutsche.de/muenchen/muenchen-stadtrat-gibt-einwilligung-fuer-projekt-bellevue-di-monaco-1.2837159

Even if refurbishment is relatively expensive, it significantly reduces the costs borne by the environment and ultimately by us humans.
Or as Pritzker Prize winner, Anne Lacaton put it:

It would be a matter close to our hearts to preserve these time-honoured buildings for the city of Selb.

The buildings have been classified as dilapidated and not worth preserving for structural reasons. 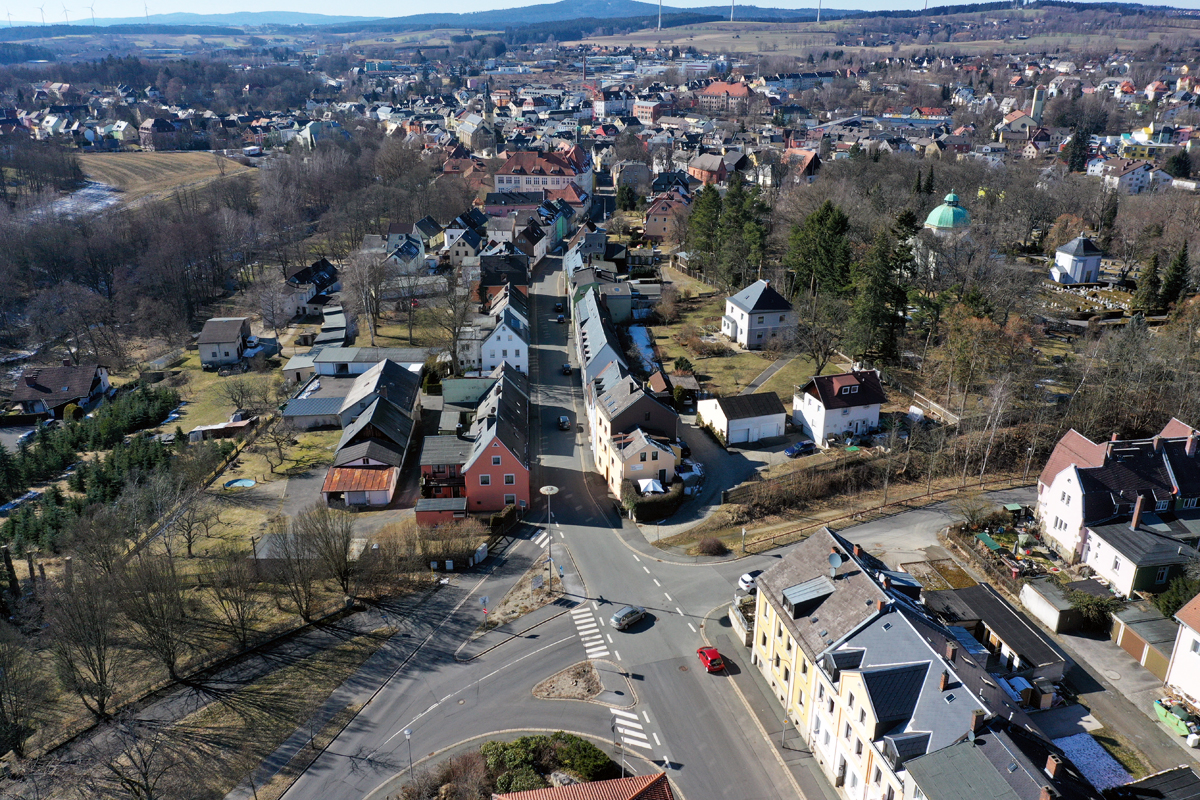 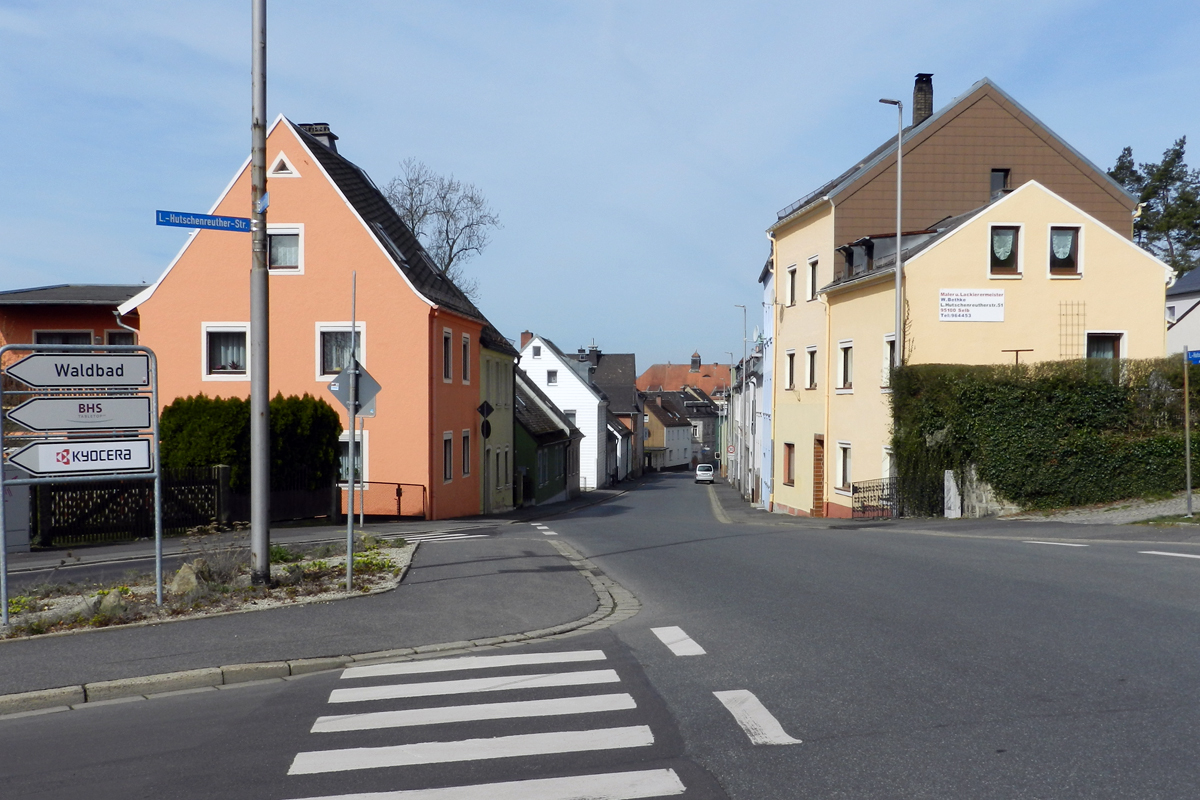 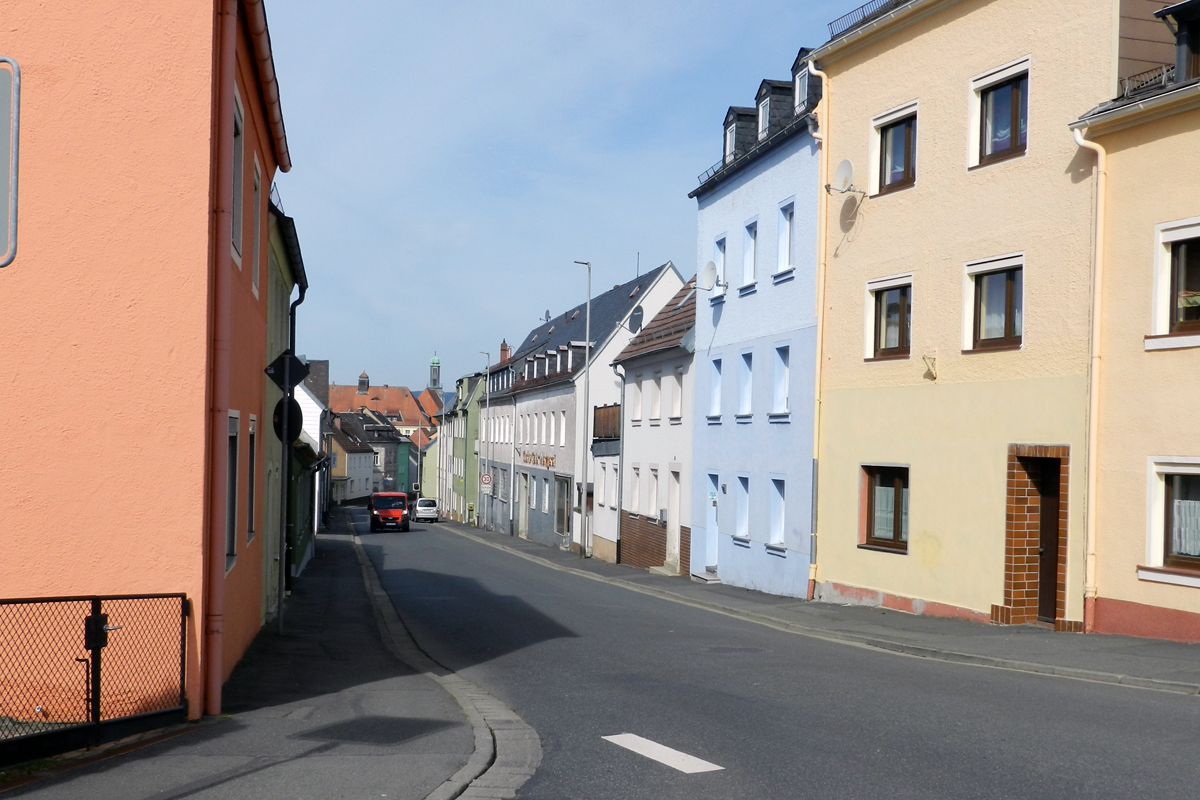 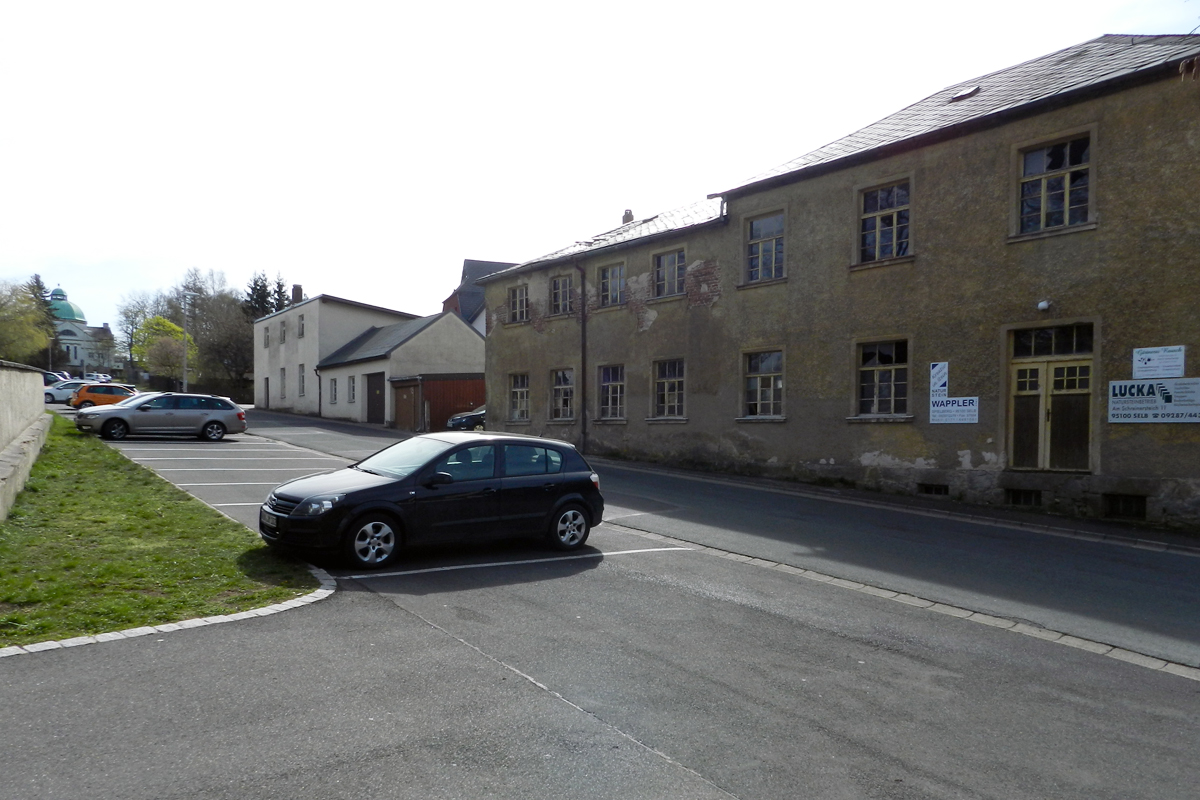