The area Chaussée d’Haecht-Bordet, located in the North-Eastern part of the city, is a real functional mixture inherited from successive layers of urbanization. The site suffers from a lack of coherence and spatial quality between these different functional and housing zones, and from a lack of identity, public spaces, equipments and attractivity. In other words, the urban character is missing.
The productive feature is characterized by an mix of production, offices and wide commercial areas. The site is also impacted by the presence of the North Atlantic Treaty Organization, and the Belgian Army, which, when they moved out, left a wide wasteland of 90ha that needs to be reprogrammed. However, between this atypical urban landscape, there is the “village” of Evere, composed of small housing ilots which barely succeeds in building a proper identity in this context of concrete mutation, and in connecting itself to the neighbouring productive activities.
On top of that context, there is also the creation of the new metro station Bordet linking this zone to the city centre.
Three main questions are raised:
1- DA VINCI: What urban context for the area Da Vinci composed of various activities and industrial parcels? How to find a proper coherence between all industrial parcels, and to link them to their environment and mostly to the new metro station Bordet?
2- Chaussée d’Haecht: How to redesign the unused 90ha? How to plan and reprogram this area to bring back mixity? How to conceive an urban and coherent vision integrating future projects and opening up the site to the landscape and to the existing infrastructures?
3- Village of Evere: What can be protected at the patrimonial level? What type of mixity does the site need? What type of urbanization should be implemented? How to integrate this municipality, located in-between two highly industrialized areas, to the urban context using the connection to the metro station Bordet? 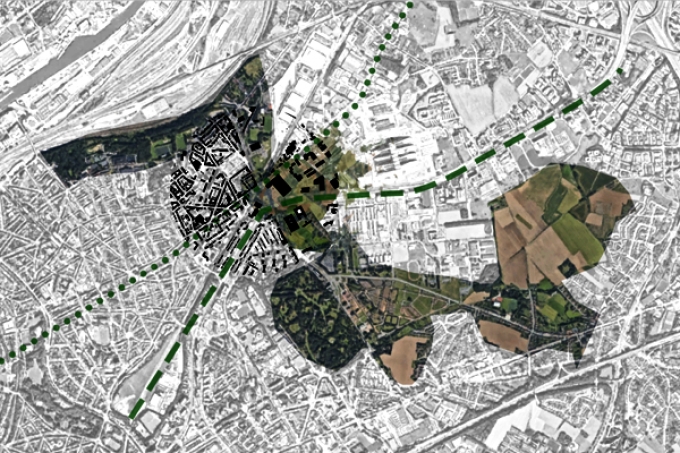 Urban industry
Conceptually, the existing obsolete office buildings on the plot are seen as an architectural resource or as “hardware”, waiting for new productive activities, or the “software”, to be hosted.
In the interior, with the purpose of promoting synergies among users, the core of each building is the only element redesigned, enlarging the circulation space with common areas in which interaction happens. In contrast, the different productive activities are spread in plan in many possible different configurations.
Regarding the exterior, the outdoor space previously seen as a leftover, is now what links the abandoned buildings to the new boulevard through the green spaces. In addition, productive activities associated with the greenery get into the interior of the former buildings through the cores, relating both the old and the new realms.

Evere
Alongside the same Chausée de Haech that runs parallel to the monofunctional office area is the center of the municipality of Evere. Here, we find a similar programmatic hermeticism, this time in relation to the predominance of housing and the lack of productive and commercial activities.
It is interesting to note, however, that this area has already integrated some small-scale industrial activities inside the city blocks, laying bare a possible integration of productive uses following the dictates of the existing fabric. Taking advantage of the urban pressure brought about by the future metro station, such a type of hybridization could be intensified according to three main strategies. First, by making visible the existing productive activities; second, by favoring the implementation of new small-scale productive pockets within the existing blocks; and, finally, by filling some of the existing gaps in these blocks with other typologies that enable the emergence of other kind of productive activities more related to the knowledge industry. 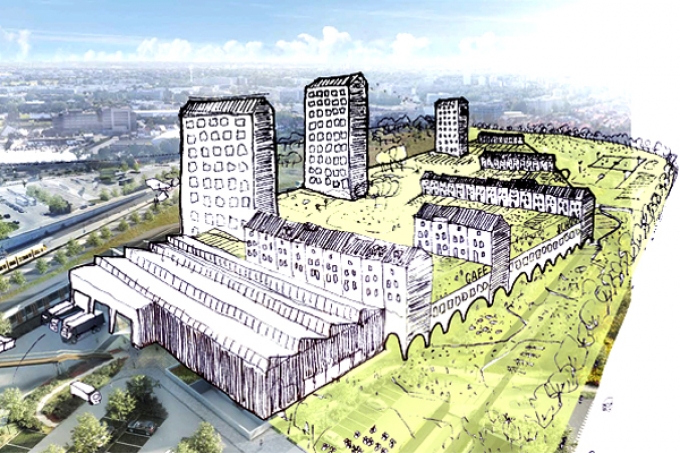