The area Chaussée d'Haecht-Bordet, located in the North-Eastern part of the city, is a real functional mixture inherited from successive layers of urbanization. The site suffers from a lack of coherence and spatial quality between these different functional and housing zones, and from a lack of identity, public spaces, equipments and attractivity. In other words, the urban character is missing.
The productive feature is characterized by an mix of production, offices and wide commercial areas. The site is also impacted by the presence of the North Atlantic Treaty Organization, and the Belgian Army, which, when they moved out, left a wide wasteland of 90ha that needs to be reprogrammed. However, between this atypical urban landscape, there is the “village” of Evere, composed of small housing ilots which barely succeeds in building a proper identity in this context of concrete mutation, and in connecting itself to the neighbouring productive activities.
On top of that context, there is also the creation of the new metro station Bordet linking this zone to the city centre.
Three main questions are raised:
1- DA VINCI: What urban context for the area Da Vinci composed of various activities and industrial parcels? How to find a proper coherence between all industrial parcels, and to link them to their environment and mostly to the new metro station Bordet?
2- Chaussée d’Haecht: How to redesign the unused 90ha? How to plan and reprogram this area to bring back mixity? How to conceive an urban and coherent vision integrating future projects and opening up the site to the landscape and to the existing infrastructures?
3- Village of Evere: What can be protected at the patrimonial level? What type of mixity does the site need? What type of urbanization should be implemented? How to integrate this municipality, located in-between two highly industrialized areas, to the urban context using the connection to the metro station Bordet? 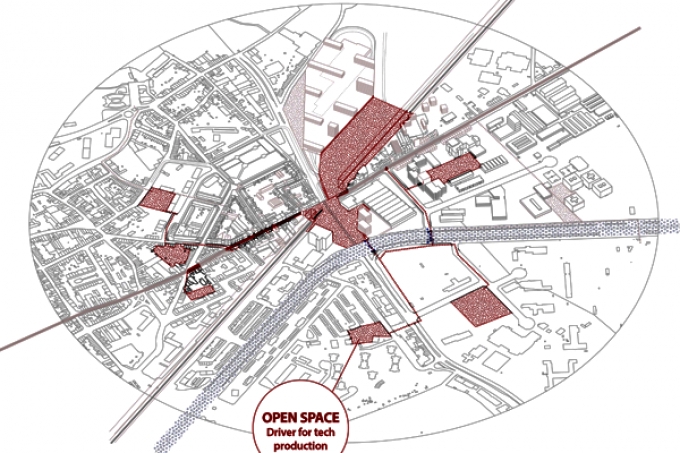 The new urbanity can be driven by the design of open-spaces, providing the opportunity to concentrate hard production and parking areas in a linear productive and green megastructure.

This area lacks identity and needs a new vision. Promoting the activity of gaming could be a strong driver to build a new urbanity. This can attract new activities related to technology, such as industries which might be interested in using public spaces to experiment new solutions for urban games.
Moreover, gaming can link currently disconnected open spaces and people, being also a possible service for the neighborhood, and it can be a strong tool to improve city-making decision processes.
At a first stage current open spaces could be turned into playgrounds, interactive sport area or digital art installations, rising the interest in new buildings developments.

Bordet Station
The new Bordet Station is an opportunity to truly activate the regeneration of the whole Evere District. The new station should be a hybrid development catering to various functions instead of a mere transport hub.
Three key themes have been identified to transform the Bordet Station into a new focal point and 'business card' for the entire district:
•a hub for different transport modes;
•a productive incubator of various material and immaterial goods;
•a welcoming meeting place with ample public space.

Station should become an important node for various modes of transport. Encouraging the use of soft mobility. Creating easy vertical and horizontal connections within the hub. To transform the station into an urban attractor, it is necessary to think about it as an incubator, a place for productive activities. Spaces should be such that can be adapted to different uses over time. New public spaces should be ample, attractive and comfortable.

Green link
The benefits of introducing green spaces into urban plans and new developments are well known. The project includes green spaces in a way that link and connect the territory and landscape. Trees are used as an element to give identity to important streets and a differential character. Different typologies and corresponding uses of the new or existing structures will be reinforced with the way to dispose vegetation around them. Trees and low vegetation are used as an other urban element in the new productive city that we are imagining. 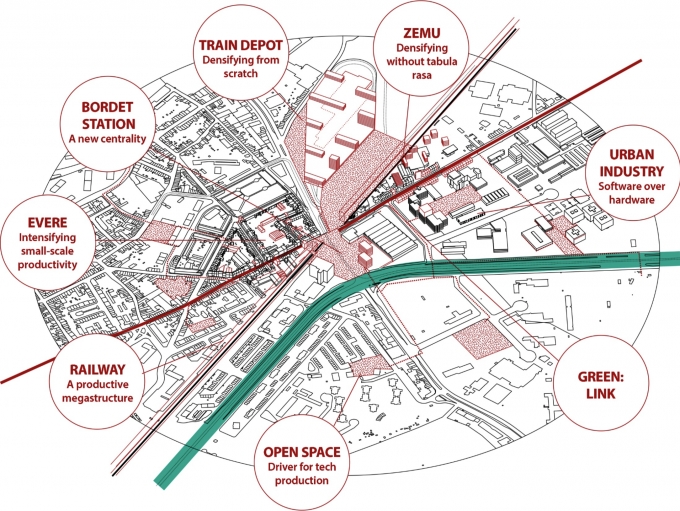