The area Chaussée d’Haecht-Bordet, located in the North-Eastern part of the city, is a real functional mixture inherited from successive layers of urbanization. The site suffers from a lack of coherence and spatial quality between these different functional and housing zones, and from a lack of identity, public spaces, equipments and attractivity. In other words, the urban character is missing.
The productive feature is characterized by an mix of production, offices and wide commercial areas. The site is also impacted by the presence of the North Atlantic Treaty Organization, and the Belgian Army, which, when they moved out, left a wide wasteland of 90ha that needs to be reprogrammed. However, between this atypical urban landscape, there is the “village” of Evere, composed of small housing ilots which barely succeeds in building a proper identity in this context of concrete mutation, and in connecting itself to the neighbouring productive activities.
On top of that context, there is also the creation of the new metro station Bordet linking this zone to the city centre.
Three main questions are raised:
1- DA VINCI: What urban context for the area Da Vinci composed of various activities and industrial parcels? How to find a proper coherence between all industrial parcels, and to link them to their environment and mostly to the new metro station Bordet?
2- Chaussée d’Haecht: How to redesign the unused 90ha? How to plan and reprogram this area to bring back mixity? How to conceive an urban and coherent vision integrating future projects and opening up the site to the landscape and to the existing infrastructures?
3- Village of Evere: What can be protected at the patrimonial level? What type of mixity does the site need? What type of urbanization should be implemented? How to integrate this municipality, located in-between two highly industrialized areas, to the urban context using the connection to the metro station Bordet?

Zemu
On the other side of the new hub, also along the Chausée de Haecht, we find a different area which is set to be redeveloped as a Zemu, that is, an area that enforces the conflation of housing and productive activities.
Interestingly enough, such a mixing is already present in this area, but in a sort of one to one relation between housing and small-scale industry that responds to a logic of adjacency. Thus, instead of completely redeveloping this area following a tabula rasa logic–as it is currently planned-it would be possible to densify it according to this one to one system, simultaneously completing and complementing the many empty pockets on site.

Metro and train depot
The arrival of the metro line at the Bordet station brings with it also the metro terminal depot. This is a necessary infrastructure but which risks becoming a large blind spot at the centre of the site.
The train depot could become a base for a mixed-used development with activated urban ground-floors towards the North and West, an open park on the roof that stretches further South on top of the railway line, and a diversity of housing schemes bridging the scale of the center of Evere and of the productive district.

Railway infrastructure
Asking ourselves about the possible meanings of the railway infrastructure in the future, we imagined an element capable of hosting hyperloop and high capacity railway lines connecting Brussels with the rest of Europe, as well as automated car parking and manufactures. Absorbing the high-tech infrastructure and industry this structure will free the boulevard to be developed as a space for social use and soft mobility. 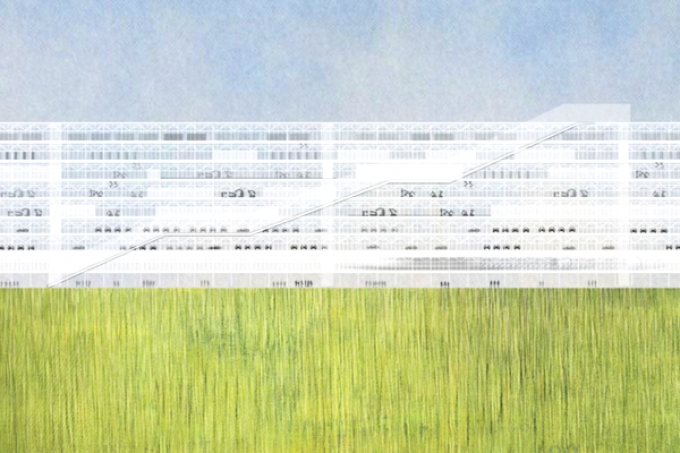