INTERVIEW
Click on the images to enlarge
1. How did you form the team for the competition?
We met during our studies at the École Nationale Supérieure d'Architecture de Lyon, during which we had several opportunities to work together on projects involving architectural, landscape and urban scales. A founding moment was our end-of-study project, which dealt with issues relating to the renewal of the Lyon metropolitan area. Following our studies, we pursued different but complementary paths, sharing common questions and commitments: working with what was already there, paying particular attention to the project process and not only to its formalization, enriching the project by working at different scales from the territory to the housing. The theme of Europan 16 and the Limoges site have crystallized our longstanding desire to work together within the same team. Our different backgrounds have enabled us to form a close-knit and complementary team for Europan 16.

2. How do you define the main issue of your project, and how did you answer on this session main topic, Living cities?
The main problem of the Saint Martial district lies in its fragmentation both on an urban scale in its relationship with the city center districts, but also on the scale of the district itself. For us, the main subject to explore was this paradox between this great geographical proximity to the city center and the enclave of the site. The Vivifica project, which means "bringing back to life", proposes to capitalize on the singular geography and the rich history of the site. Through four themes, we develop the subject of the living city:
•    the Living City as an inhabited city
•    the Living City in the biological sense of 'living' and nature
•    the Living city as a place of effervescence of living together
•    the Living city, the city cycle
By stitching the urban fabric, the project restores an overall coherence to the district. Our project strategy is based on operational tools, more or less frugal, which can be mobilized according to the property, financial and temporal opportunities of the city of Limoges. The project offers a toolbox for phased revitalization, which can be modulated and adapted to the city's funding and opportunities. It illustrates the activation of these tools in several "pilot" sectors, which have emerged as the levers for the transformation of the district: the reconquest wasteland (ENEDIS wasteland), the school esplanade (GRDF wasteland), the crossing of the Sisters of the River (eponymous islet), and the squares of the Atelier (Garages and Place des Jacobins)

3. How did the issues on metabolic and inclusive vitalities and the questions raised by the site mutation meet?
Since Antiquity, the site has been able to live and renew itself, and to accompany the changes in the city of Limoges: housing, combining crafts and industry, civil, military and religious facilities have successively animated the life of this district. It is a site in constant regeneration as the analysis of its parcel history has revealed. However, this dynamic of renewal seems today to be frozen, on hold.
Is this due to a lack of an overall vision for the site?
To a lack of suitable operational tools?
Or is it because of a lack of resources to support this renewal?
We addressed these questions in our Vivifica project by questioning the regeneration cycle of the contemporary city. The idea of process has guided the project. It is not defined solely by its formalization, but rather by the actions it sets in motion, sometimes on a very small scale and always with a view to phasing in time.
4. Have you treated this issue previously? What were the reference projects that inspired yours?
This issue of the living city seems to us to be recurrent in urban, architectural and landscape projects for a number of years. In our professional capacity, we have been able to work on studies concerning devitalized city centers and town centers, for example in the framework of the Action Cœur de Ville program, in rural and metropolitan areas. We also have knowledge of the problems linked to industrial sites, still active or abandoned, through our work on the Vallée de la Chimie in the south of the Lyon metropolis, or the industrial wastelands of the Clermont-Ferrand area. These subjects raise questions about the cohabitation of industry and urban centers, with the ambition of decompartmentalizing these often isolated sectors and the problems of soil pollution for which no use has been planned. Finally, we also grasp the issues linked to the presence of water in the city, with the production of a thesis on the sensitive appropriation of the riverbanks in the city through the implementation of simple operational tools for their users. Reference projects:
● Blandan Park in Lyon by the BASE agency
As far as the landscape and polluted soil issues are concerned, the tools we are putting in place are inspired by the work carried out on the Parc Blandan in Lyon, carried out by the landscape agency BASE: this project to convert a former military site into an urban park, is based on a strategy to reclaim the soil. The vegetation formed over the years of wasteland is partly preserved as a contemplative landscape, the concrete slabs are punctually excavated to make way for densely planted, inaccessible spaces that contribute to the gradual depollution of the land.
● Buropolis by the Yes We Camp collective in Marseille
The work of the Yes We Camp collective with the Buropolis project in Marseille particularly inspired us on the issues of transitional urbanism and conservation of the existing. The project provides for the occupation of a disused building of 16,000 m² destined for demolition and its availability for mixed uses.
5. Urban-architectural projects like the ones in Europan can only be implemented together with the actors through a negotiated process and in time. How did you consider this issue in your project?
The question of the process and the relationship with the project actors is one of the key elements of our project. From the outset, we have sought to develop a project that can be adapted spatially and temporally and whose general strategy can be adapted to the constraints (particularly budgetary) of the actors in this process. We have relied on the development of new uses, with little investment and transitional urban planning strategies that allow us to prefigure new public spaces, modifying the perception of the site in the collective imagination and accompanying a more in-depth transformation in parallel. It was fundamental for us to get away from the linear logic of traditional urban projects. The operational tools developed by the project are devices that allow us to adapt to the land and financial opportunities made available by the city of Limoges. Close consultation with all the project's stakeholders and the city will make it possible to define the levers and operational starting points for the urban revitalization of the district.

6. Is it the first time you have been awarded a prize at Europan? How could this help you in your professional career?
This special mention for our first participation in Europan is an encouragement to continue our collaboration in several possible forms: participation in other international competitions, setting up a collective, creating a structure... Five years after our graduation, we are looking for a new perspective on our professional practice. We have each experienced different subjects and structures in our respective professional careers. Today, we feel the need to bring our voice and our responsibility to the contemporary issues at stake in architecture, landscape, and urban planning. This distinction in the Europan competition, which focuses on the challenges of the city of tomorrow, gives us a platform to express ourselves on these subjects that are dear to us.

Has your team, together or separately, already conceived or implemented some projects and/or won any competition? if yes, which ones?
We had the opportunity to work together on several occasions during our studies, on architectural, landscape and urban projects. Some of us have subsequently collaborated in the context of applications for architectural residencies organised by the Réseau des Maisons de l'Architecture. Each of us has several years of experience in structures as project managers, in which we have been able to design and carry out numerous projects and studies at various scales. Europan 16 was an opportunity to work together on issues that are close to our hearts. 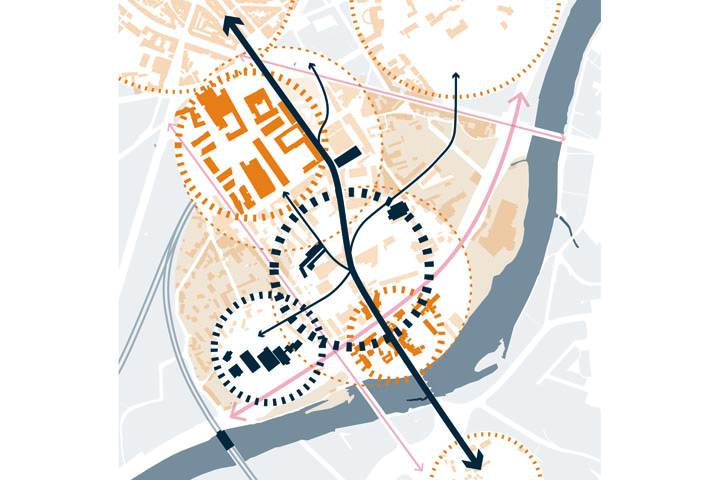 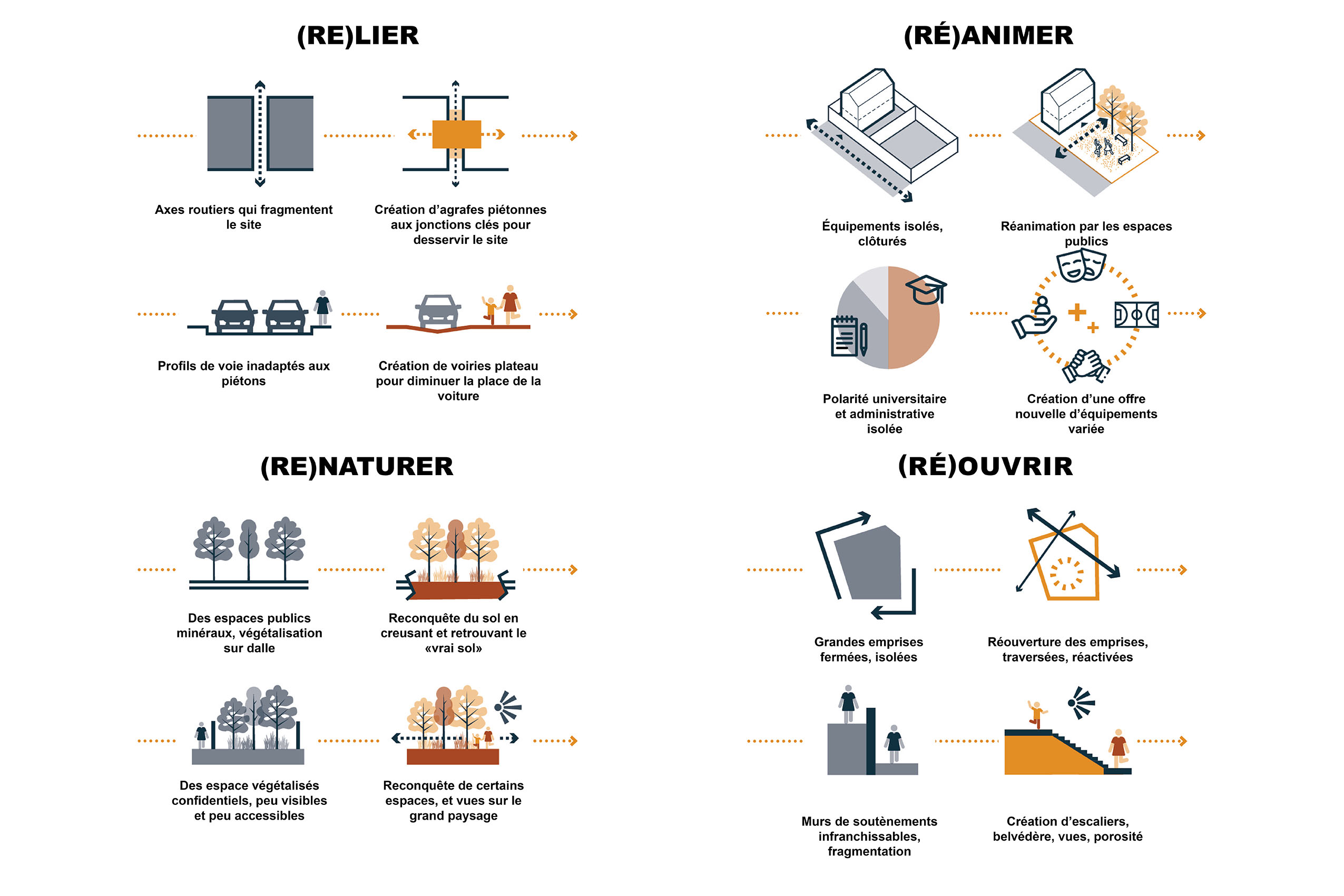 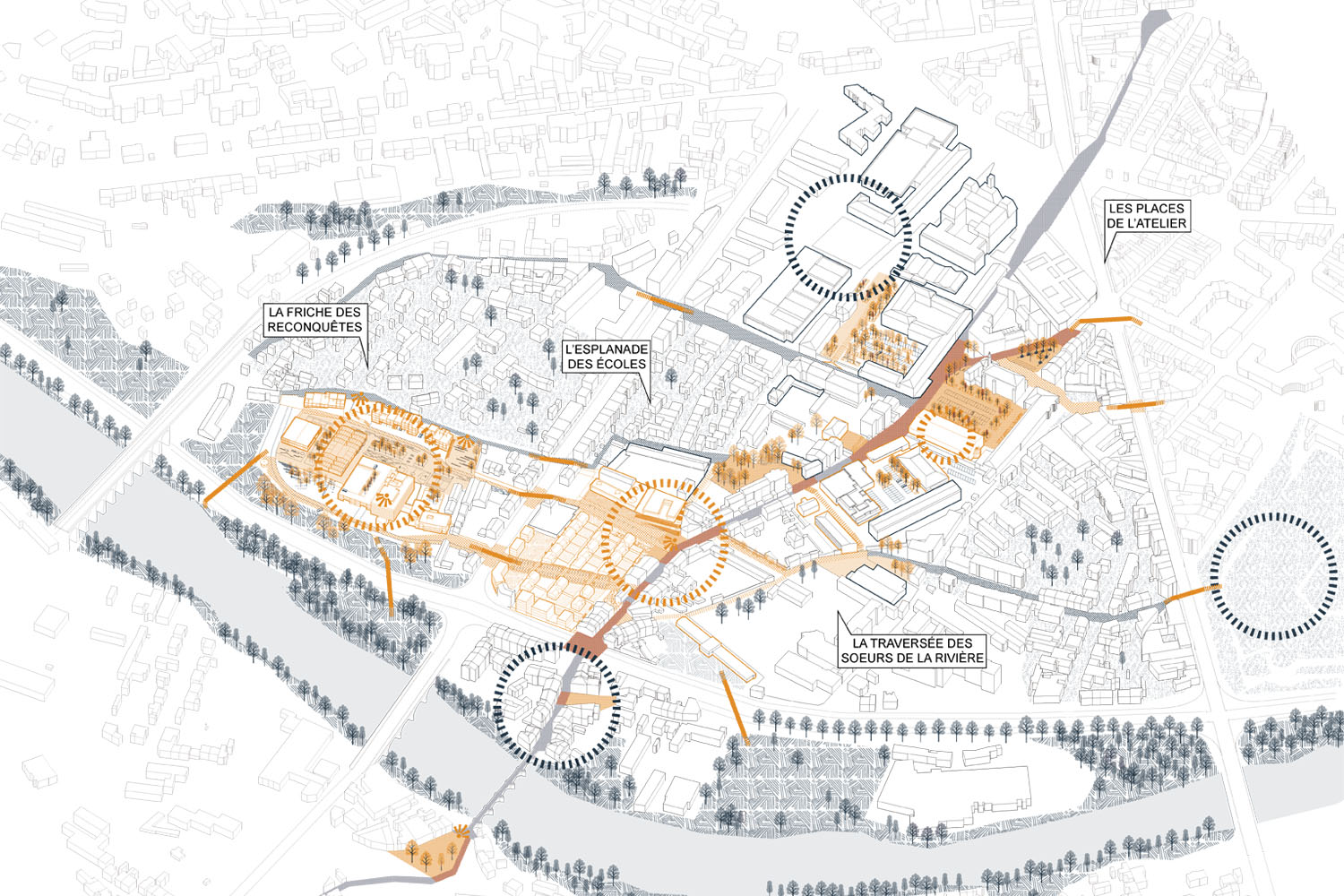 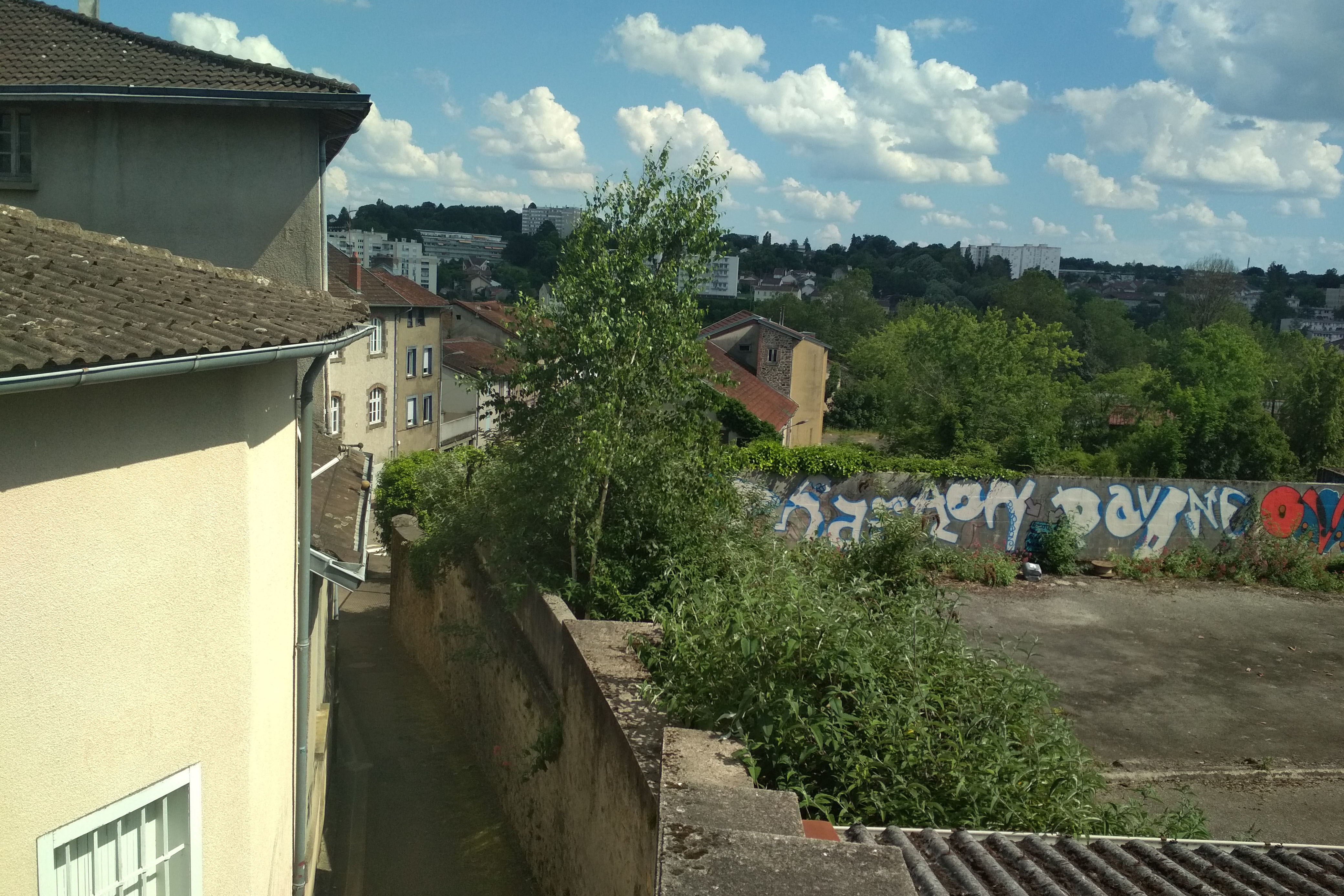 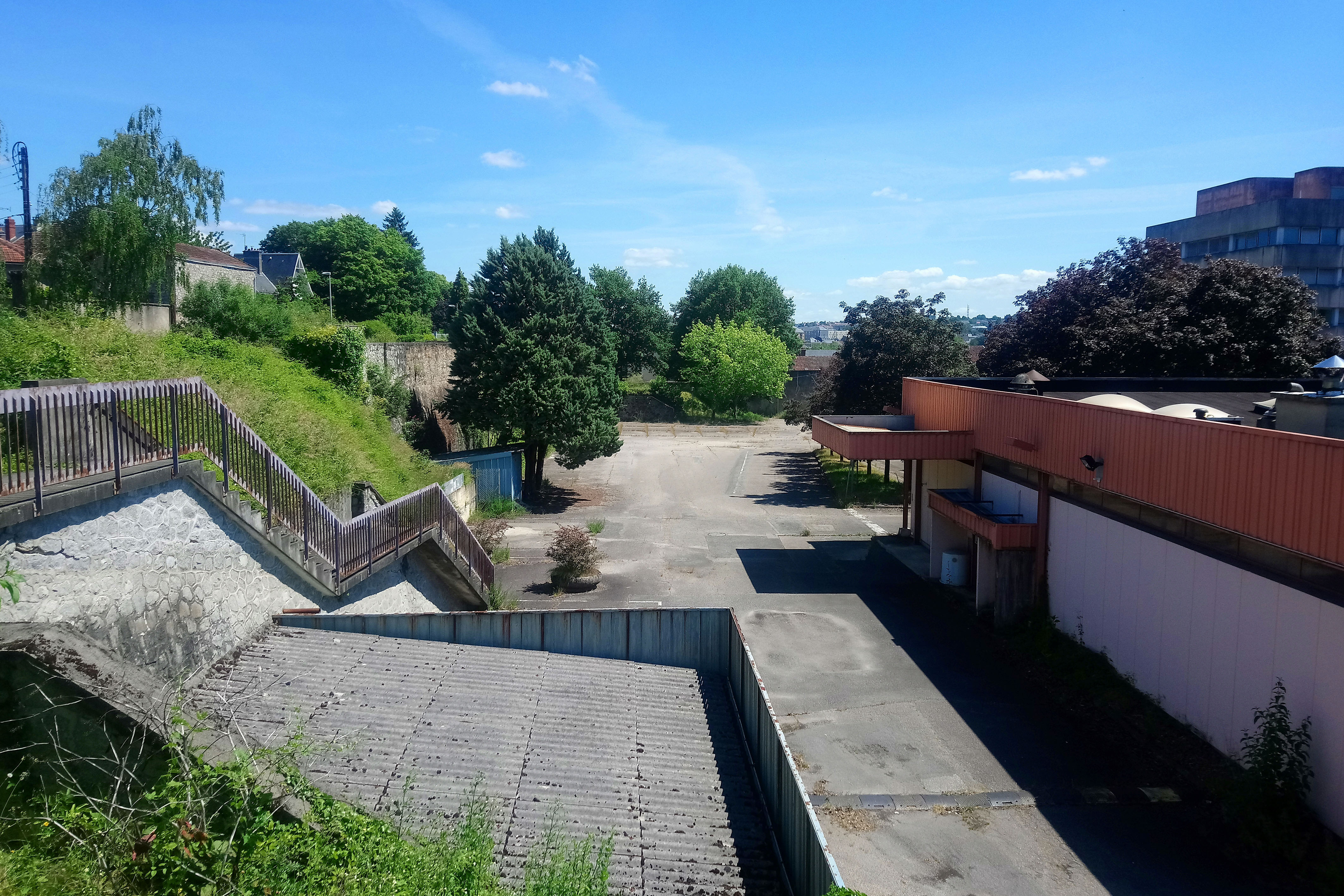 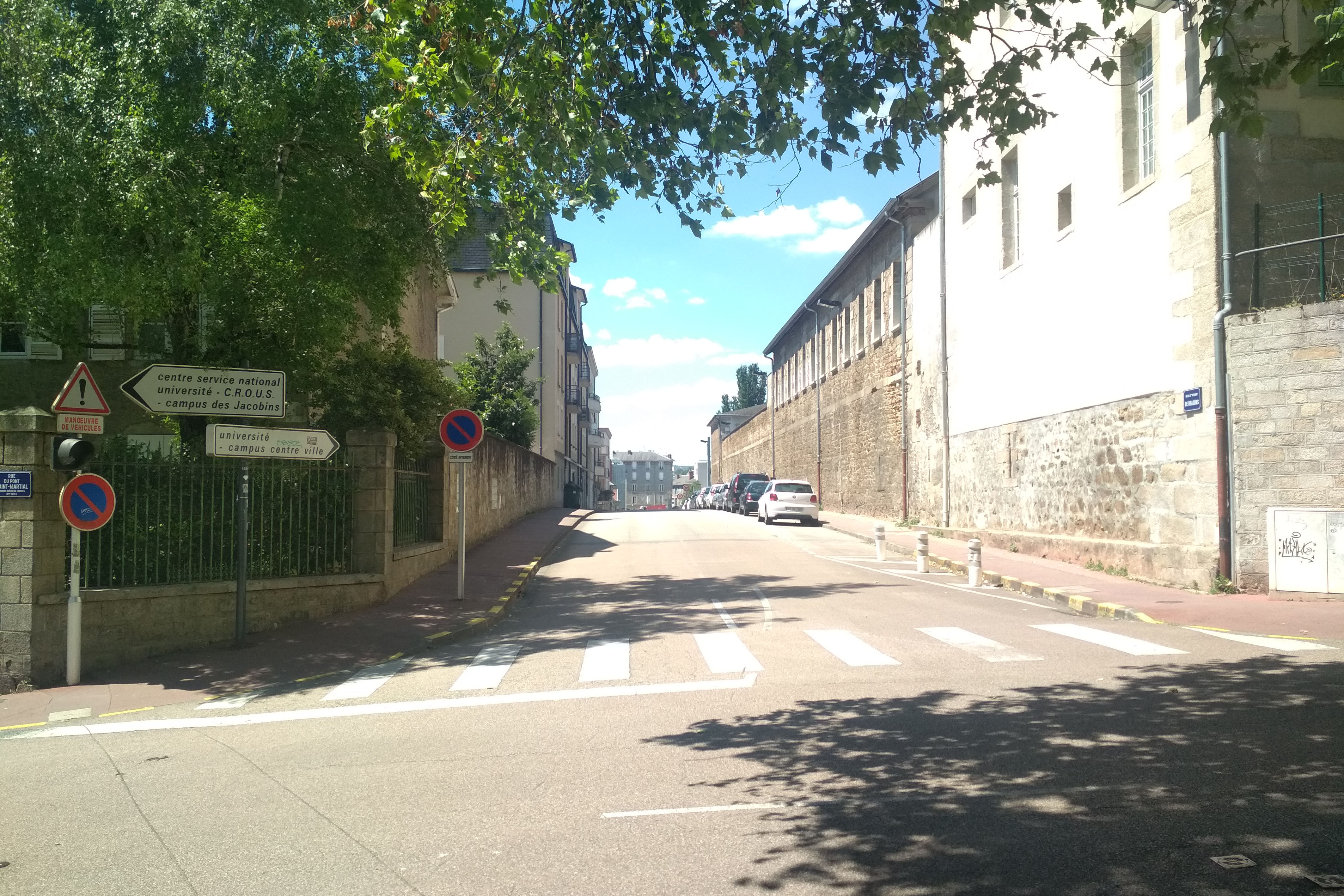 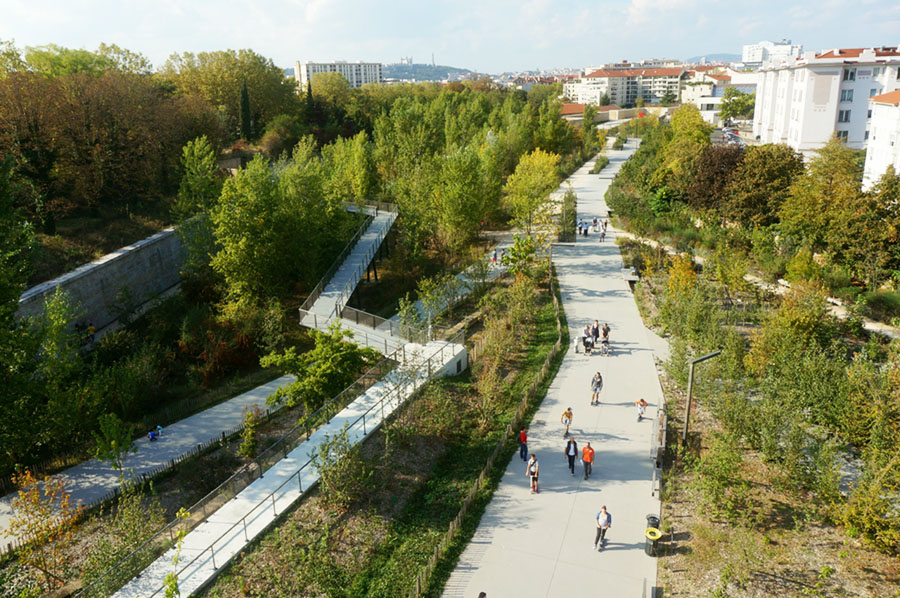 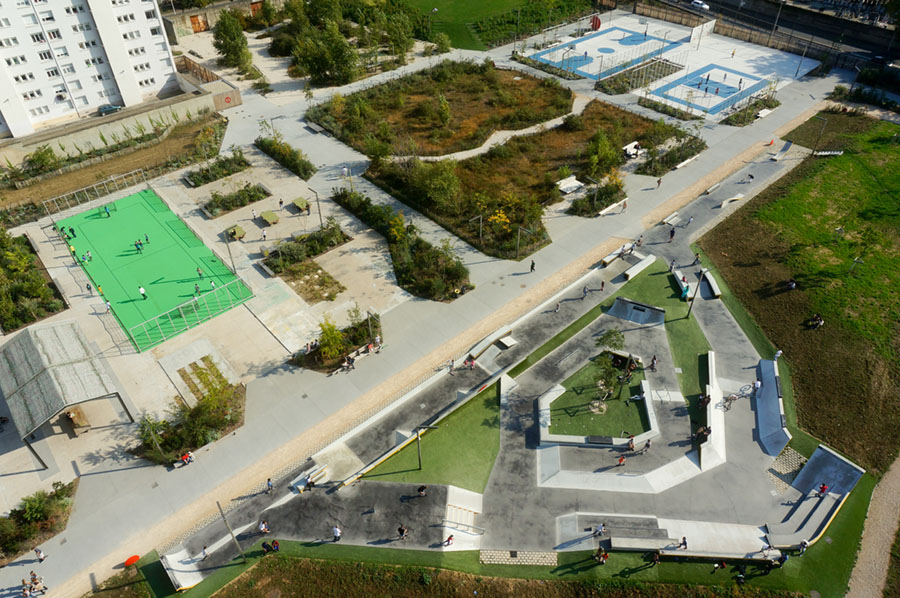 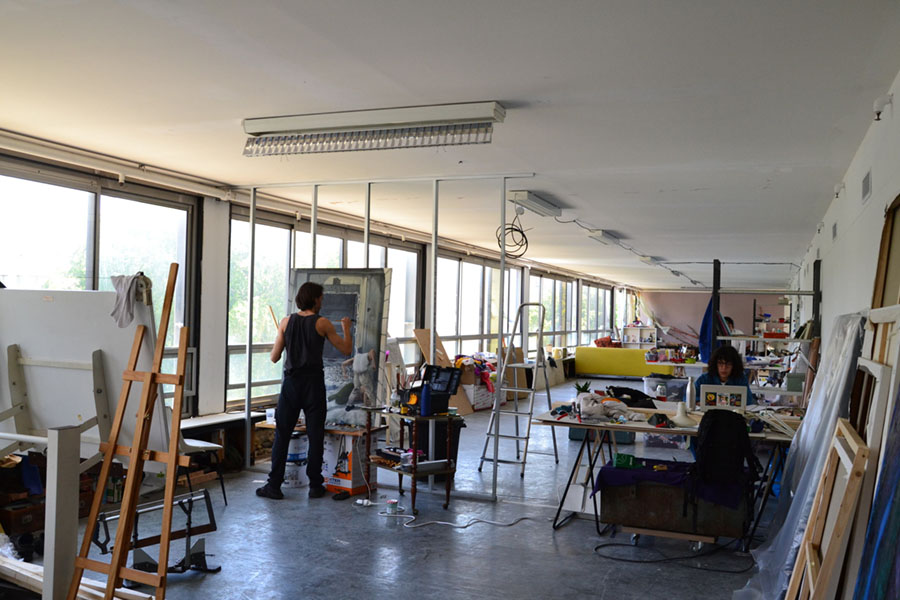 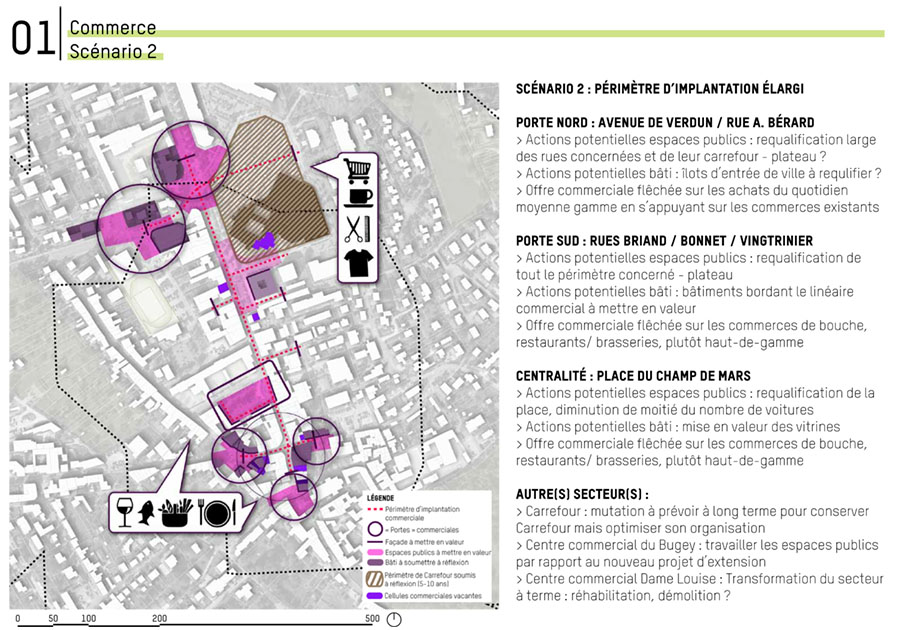 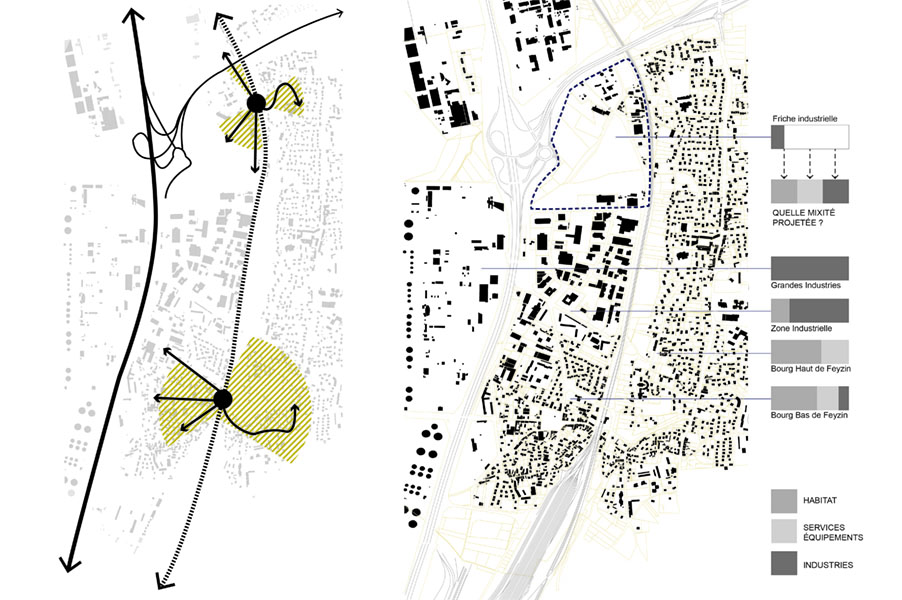