2009
The project establishes a strong dialogue between the new administrative town pole and the context, in order to imagine the ”Beffroi”, the “Eglise Decanale” and the “Maison du Bailly” as prolongations of the same project. The new buildings graft them in the urban nucleus on the ”Place de d’Hôtel de ville”, creating a re-stitching with the existing fabric, offering the possibility to devote the whole south side to the “Parc d’Epinal”, a garden thought as an urban park open to the city. The generating sights on the symbols of Gembloux fragment the new town pole in smaller parts in conformity with the urban staircase and they create a separated functional program in more fields. The new fragments settle and emerge from the irregular surface of the park exploiting the variations of quota, they constitute two new public spaces complementary one to the other. Established in different quotas the two squares are parts of the ascensional route: city - town hall - park. Buildings fragment the new town centre into smaller parts, according to the urban scale, and create a programme divided into functional areas.

2010-2012
The Municipality was concerned to follow both the jury’s choice and public tender procedures.The responsible authorities accepted that the competition itself constitutes a competitive tendering process, which can lead to a negotiated procedure.This negotiation concluded with a contract with the winning Italian architectural office for the reconstruction of the town hall. The Italian team has joined forces for the purpose with Belgian offices: Syntaxe Architectes for the local operative support and Bureau d’Etudes Lemaire for the structural and plant engineering support.
The fragmentation of the building and the views of the city’s landmarks, primary elements of the project, were maintained, although the initial functional programme was reduced: some offices and administrative facilities were limited or merged, the number of building blocks was reduced to 3 (5 originally), the spaces between the buildings, that had been thought as void spaces, were covered with glass and became connecting elements among the different sectors of the Town Hall.
In the later stages of the project, technical aspects relating to the building’s energy efficiency and the actual construction process, were developed.
The choice of copper as the cladding material was undoubtedly the most striking feature of the project. Although it required special approval, it is considered by the regional planning authority as one of the essential features of the building, which could not be changed without destroying the soul of the project.
After a significant period for adaptation of the project, because of changes in the spatial requirements of the administrative departments, and essential precautions to ensure that the cost of the project would remain financially credible despite the addition of further underground parking, the work started in 2013.

2013-2015
The project is grafted in the ancient urban centre, with its tangle of irregular and narrow streets, and it's designed as an operation of coherent integration with the existing urban tissue: in this case the south front of the building is entirely opened on the Parc d’Epinal, that becomes the central garden for Gembloux citizens.
The definition of specific points of view focused on the symbols of Gembloux activates a process of fragmentation of the unitary mass of the building into three smaller parts, that adjust to the urban scale of the city and house different functional programs.
The resulting fragments, covered with a copper cladding, take advantage of the various elevations of the project site and generate an articulated sequence of public spaces complementary to each other. Between each of these blocks there are glazed diaphragms: empty space between solid building masses, places of transition from where the user can appreciate the surrounding townscape. 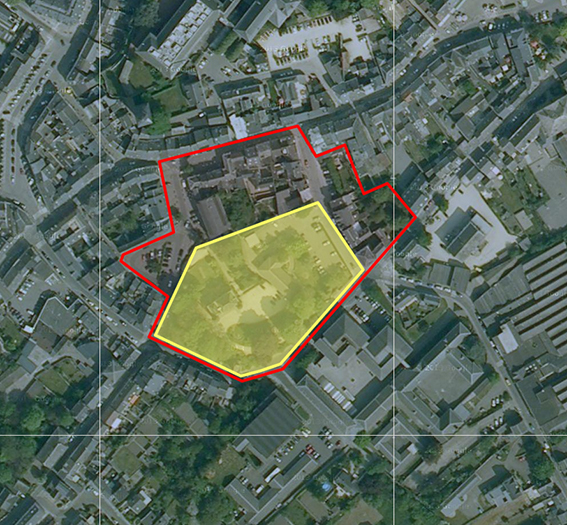 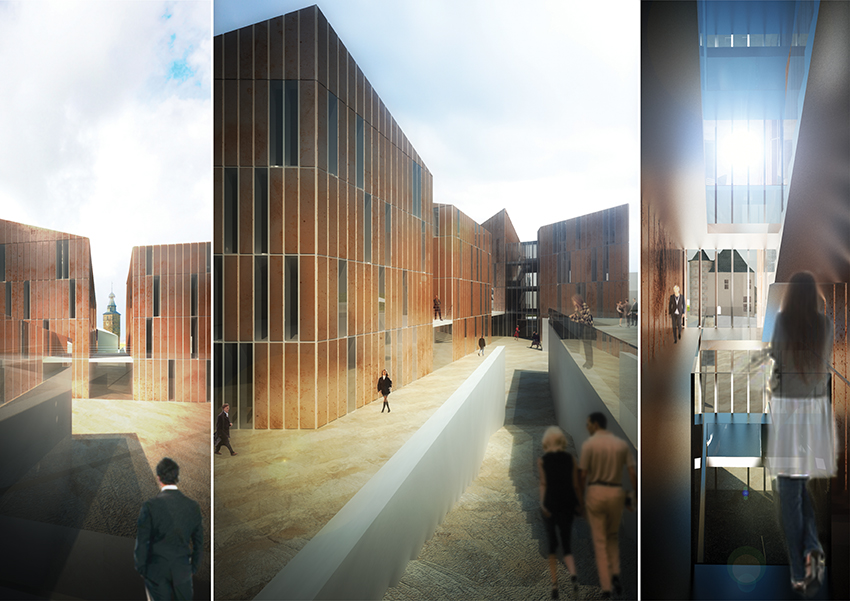 The town, town hall and park form waymarks on a route that becomes an opportunity to introduce a variety of spaces for social interaction. 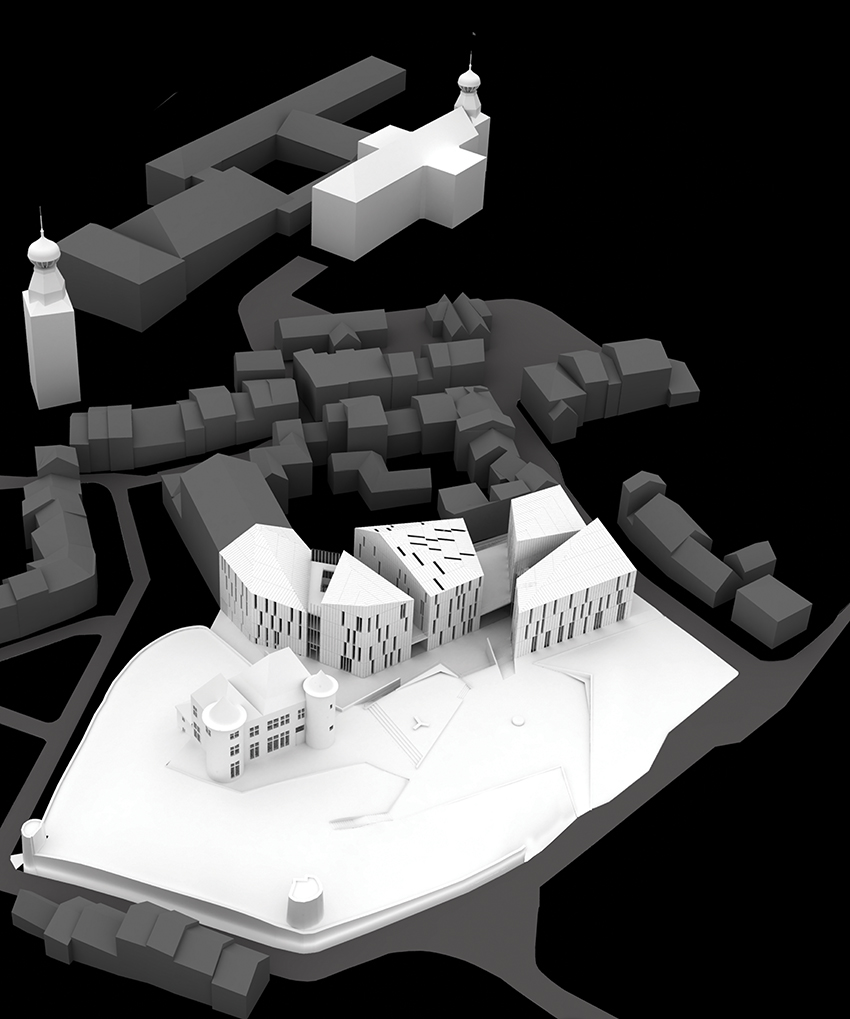 By introducing new buildings into an existing fabric, the project develops a series of fragmented public spaces, framing the urban landscape and Epinal Park. 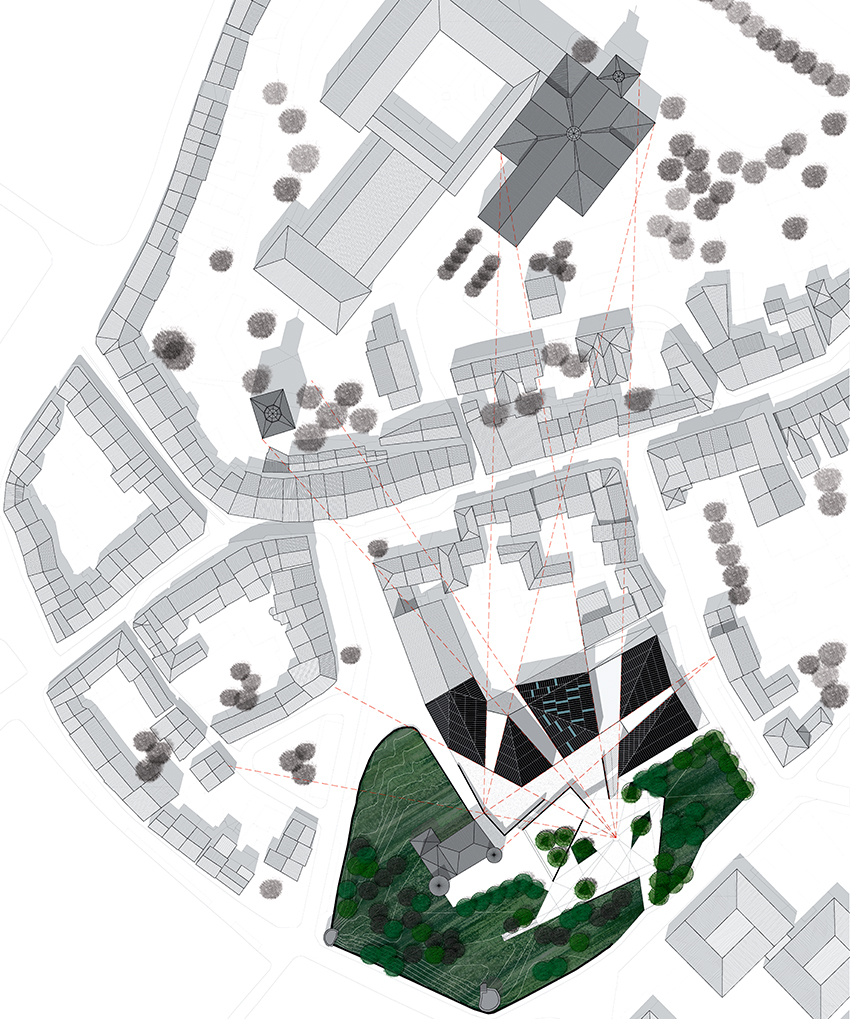 The programme as a whole is fragmented in such a way as with to maintain coherence with its context: the morphology of each building is designed to emphasise the visual connections between inside/outside in relation with the town’s iconic monuments. 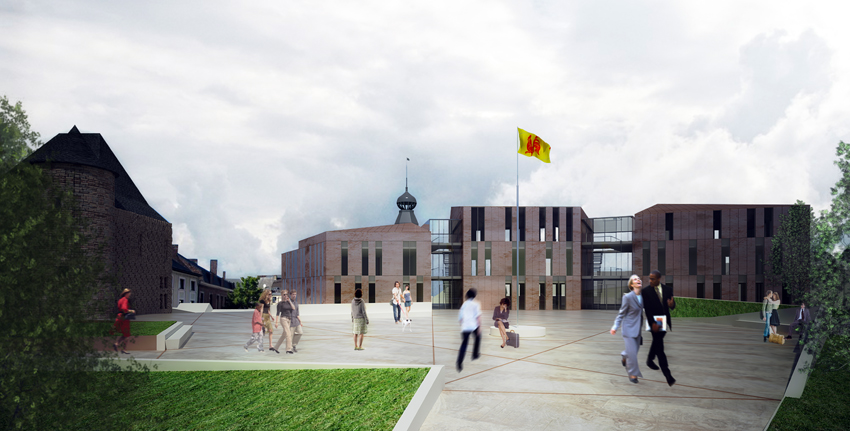 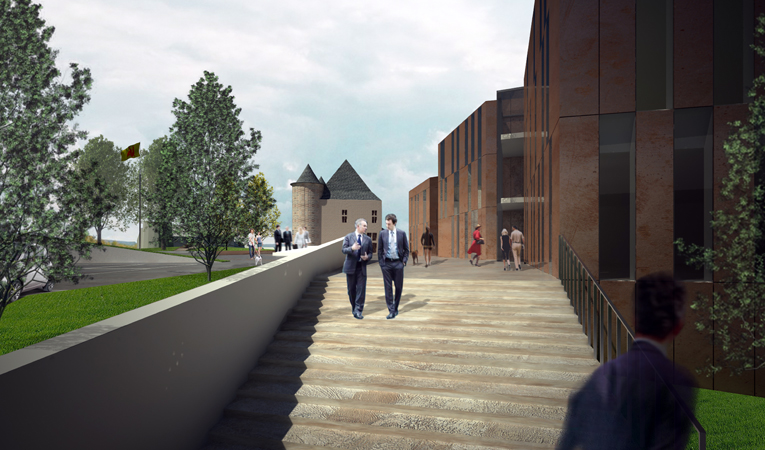 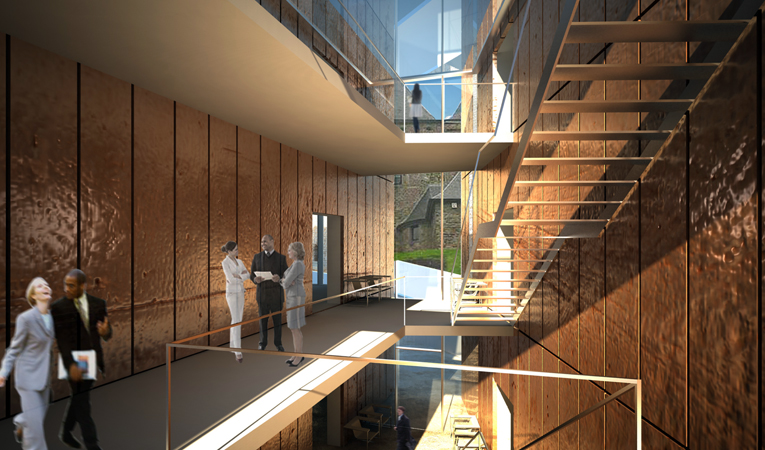 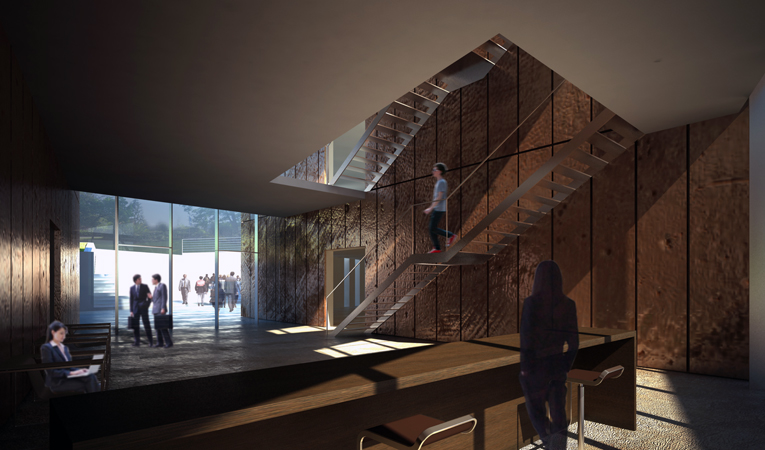 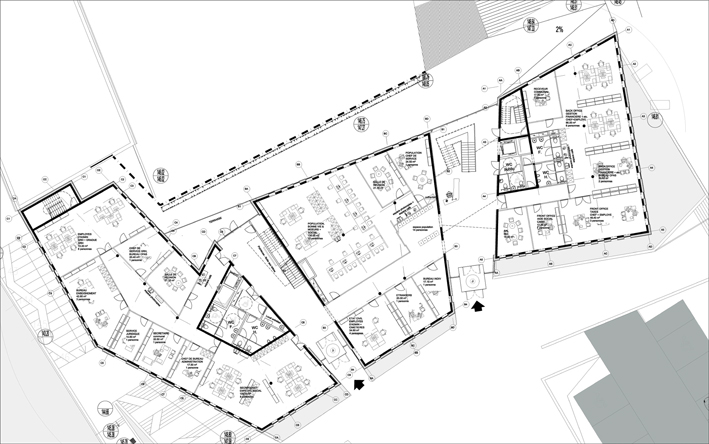 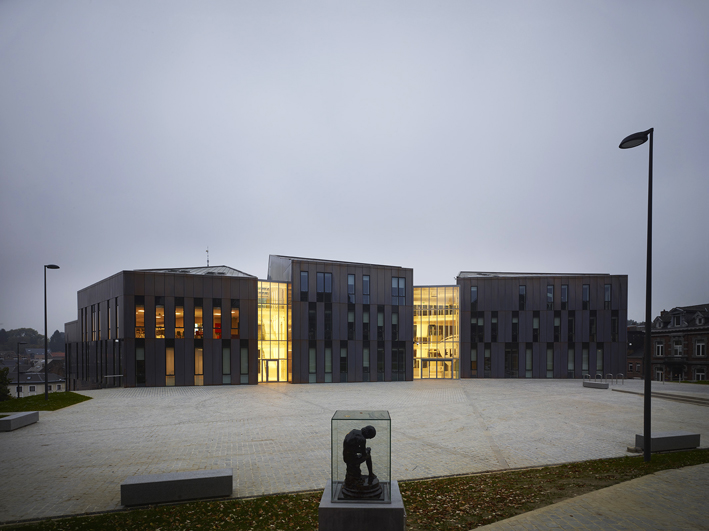 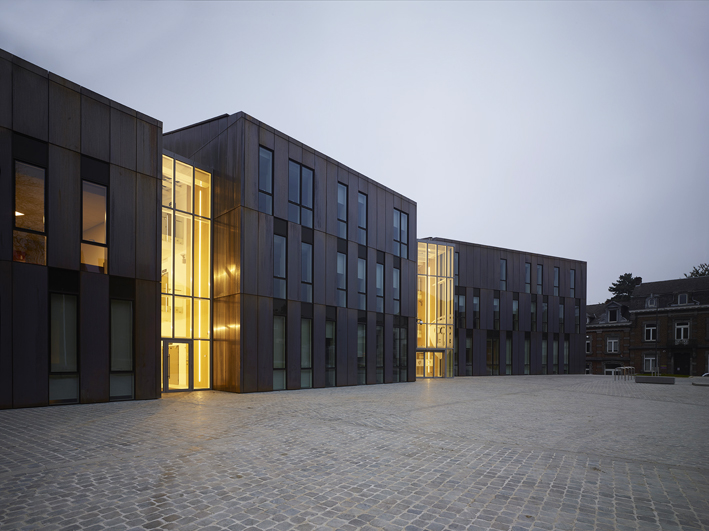 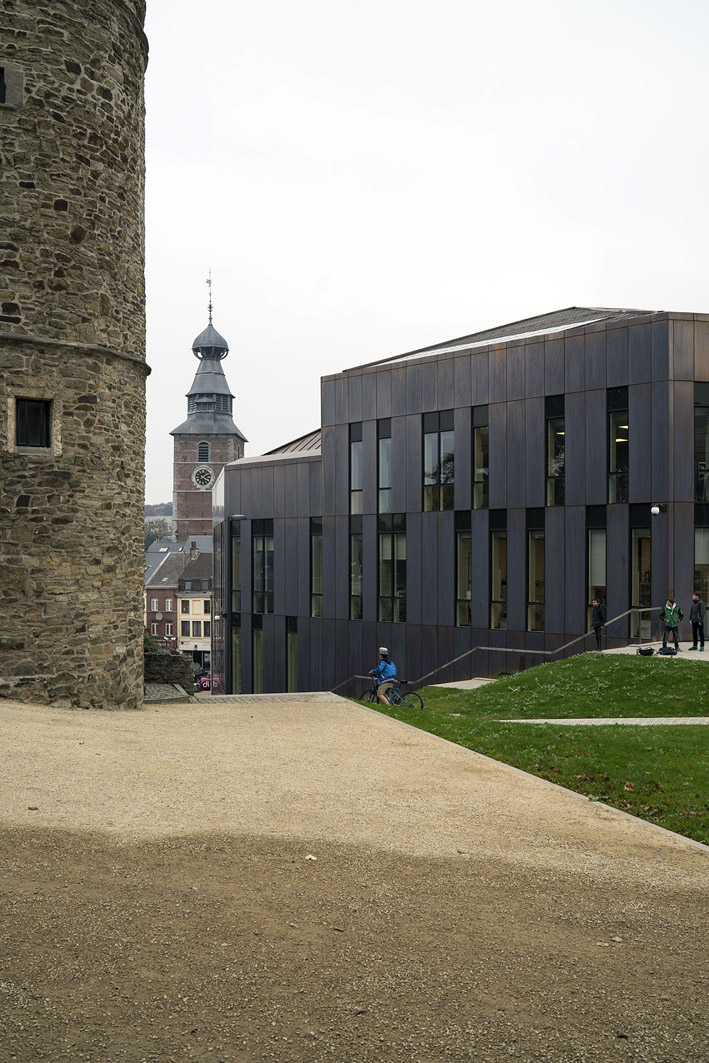 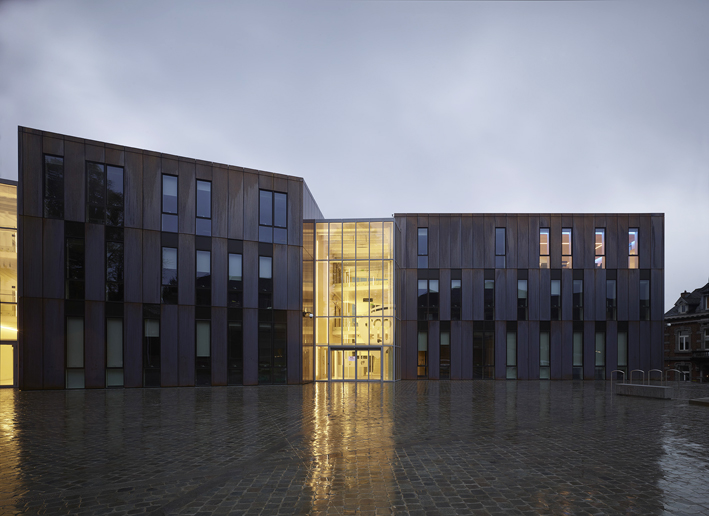 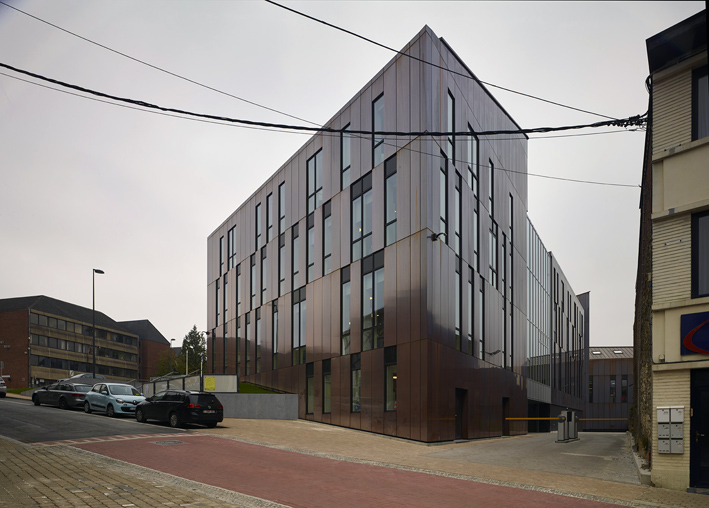