2011
The site of project is localized in the peripheral zone between two cities, that it will have to be developed in the longitudinal sense of the valley.
This will have the role of splice of the cities for an only future linear city. The new zone benefits of the existing infrastructures of the industrial zone. This zone will have the ability to receive the activities and the infrastructures that the historical centres will not be able to assume seen their morphologies.
In the configuration of the future city, the new zones of activities assume the role of connecting between the centres.
In order to define a new identity of the place, the project identifies three gates characterized by three mobility and three public buildings. Those three gates are connected by a linear, vegetalised and pedestrian space public, where are concentrated the trade and of activities. Moreover the urban strategy proposed allows a demolition for phases of the existing industrial activity.

2012-
After the competition, Monthey municipality commissioned the team to explore the project in greater depth and to develop a plan for an eco-district. From the original competition site of 100,000 sqm, another area has been added of around 60,000 sqm. Despite the inevitable changes, the green strip –the public space that is the essence of the project– has held out. This space is the only instrument that the public administration can control through to the end. On the other hand, the density has changed, whether because of the town’s real needs, economic concerns or the practices of the inhabitants (there is a shortage of housing at present). The new station has also increased in scale because it needs to accommodate an interregional train; this is a significant input in terms of infrastructure, which will give impetus to the creation of a dynamic neighbourhood, ultimately serving around 20,000 users.
The team characterised all the post-competition work through different specific themes: public interest, in particular the green strip that helped them design a station; the performance hall area, a former factory reclaimed and which is the only trace of the site’s current life; and a hypothetical conference centre, north of the site.
They also work on the question of mobility; not only mobility characterised by the infrastructures outside the site, but also mobility within the site, which is primarily pedestrian. They restricted car traffic solely within the residential fabric in order to protect the green strip and they gave priority to walking and cycling by reducing car traffic to a minimum, while at the same time minimising underground car parks to avoid the need for excavation. The car parks will be at ground floor level, while the residential floors will start on the first storey. A study has been conducted on the station access, because the current level crossing will no longer exist. The crossing will be underground, connecting the public space of the green strip with the rest of the town.
From the first stage of implementation, the green strip can begin to emerge and be developed over time. In the meantime, part of the plot will be used for sports fields or public gardens. Then, densification will subsequently increase.
At this stage of negotiation, the priority is not the layouts of the buildings but maintaining an open structure so that the negotiation on the architectural volumes can be left till later; and there will be further projects to be conducted by other architects, which the winning team will perhaps have to manage in the future... So at the moment, the project consists primarily of two or three basic rules that set a sufficiently strong strategy to survive. In this case, the green strip represents the element that will regulate the whole development of the project. 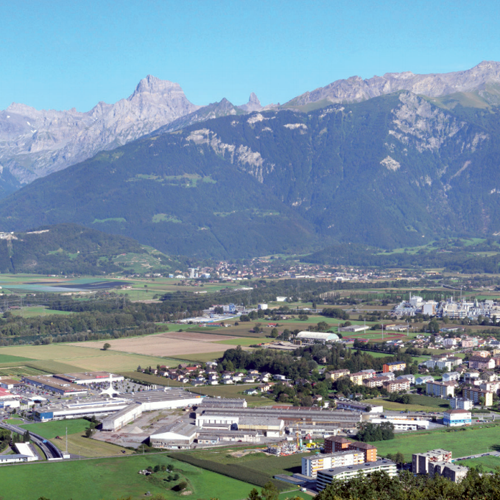 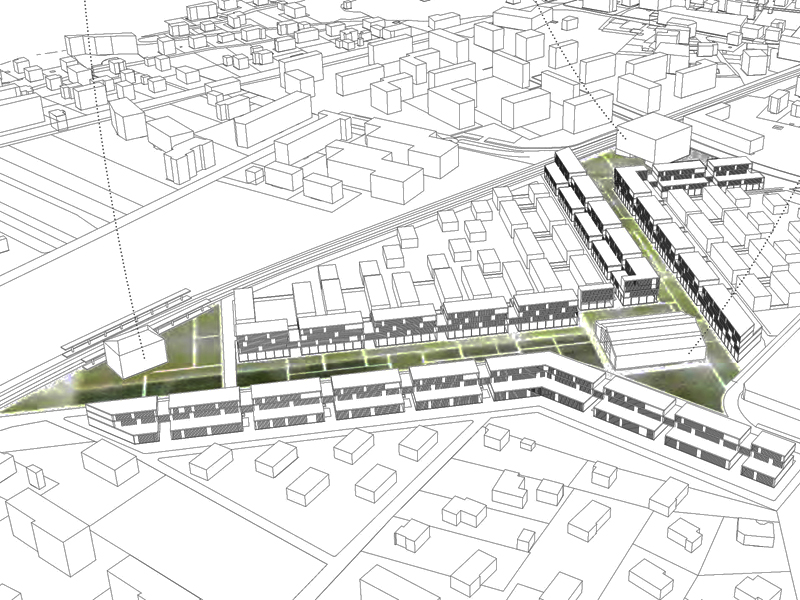 A large scale urban form is organized around three nodes of activity containing public amenities and located at the corners of the plot. This urban scheme is completed by a "L" shape layout, composed by a linear boundary of tertiary activities, and a porous fabric of residential buildings. 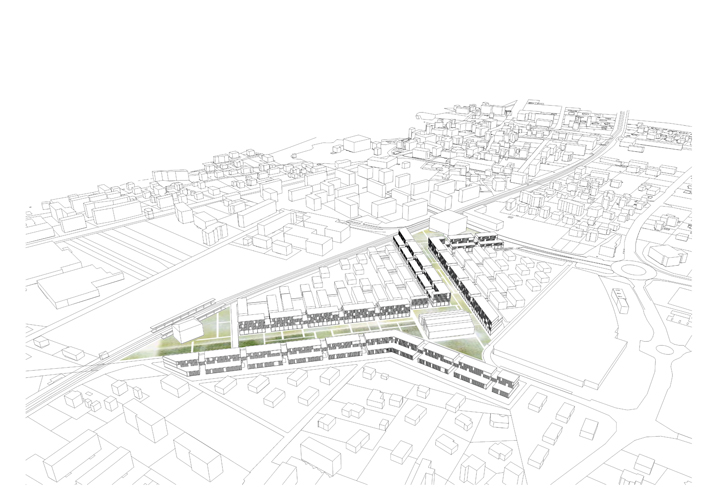 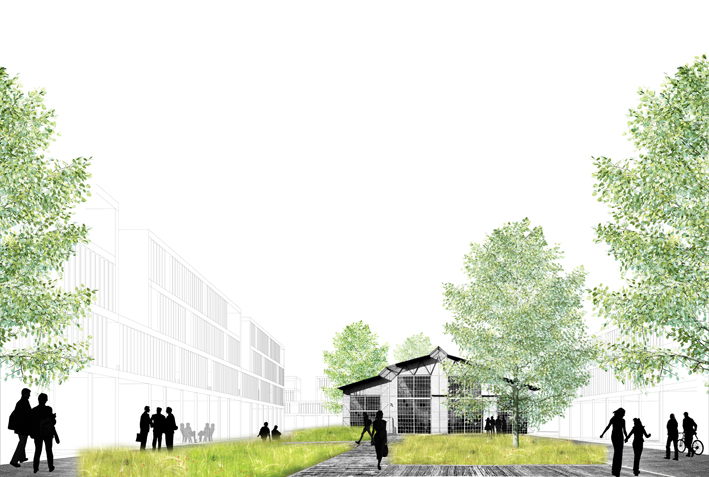 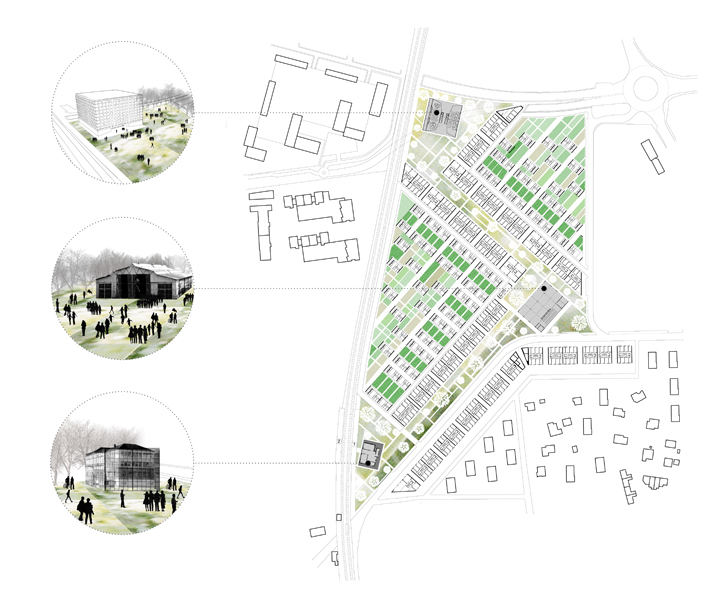 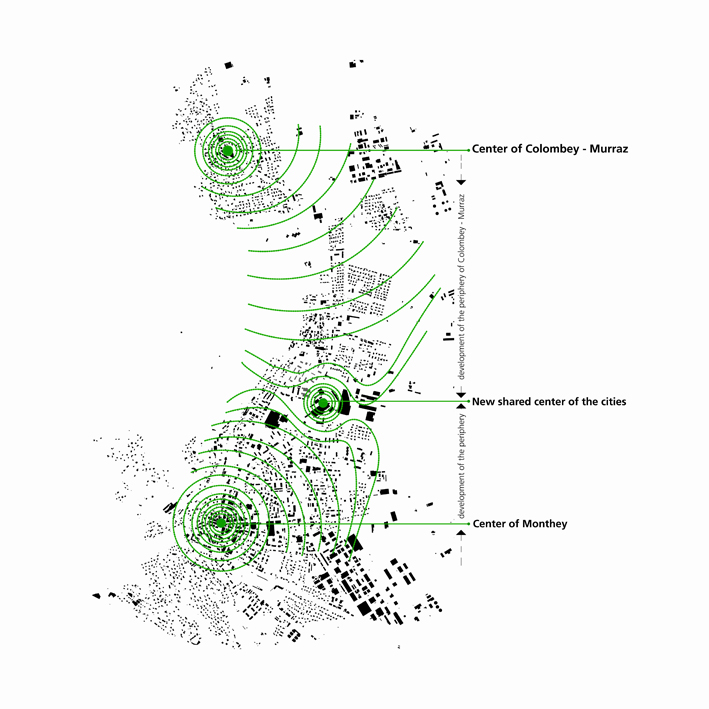 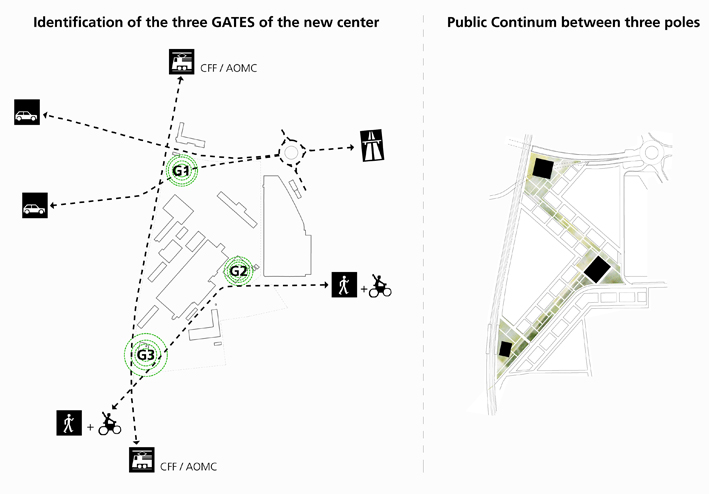 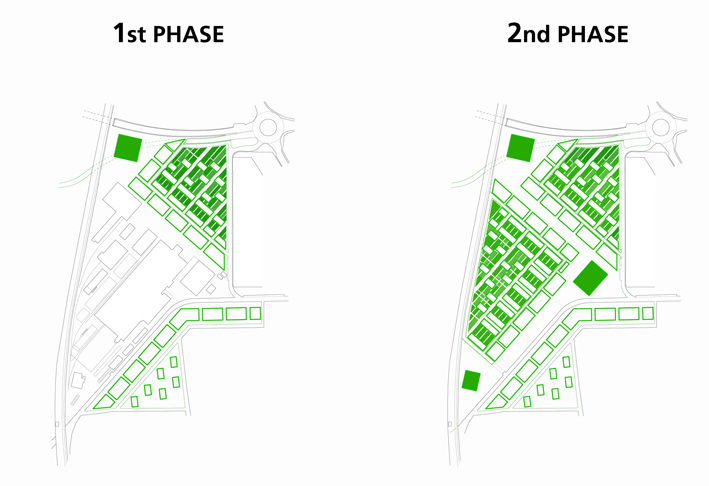 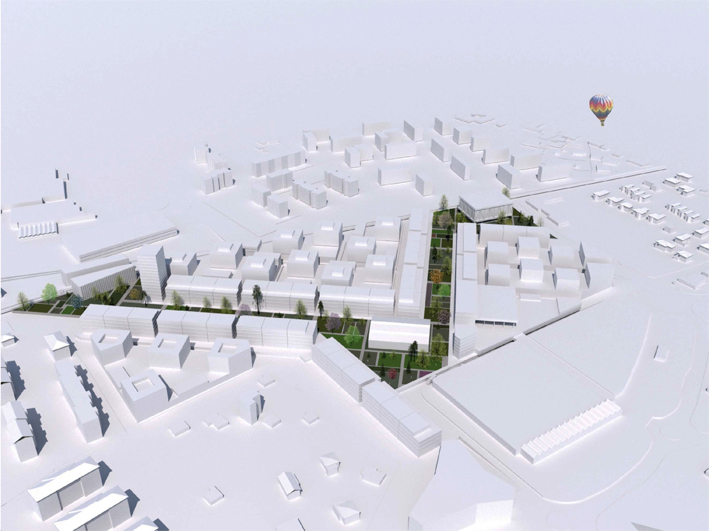 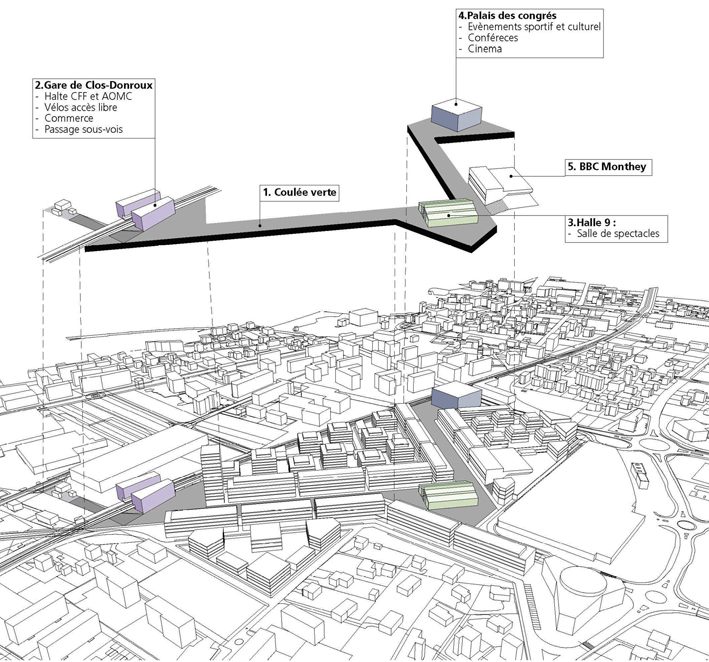 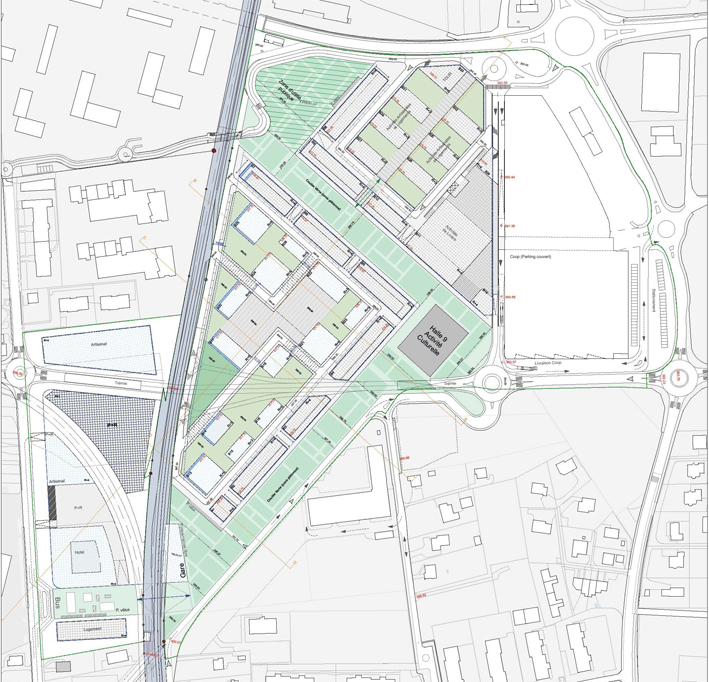 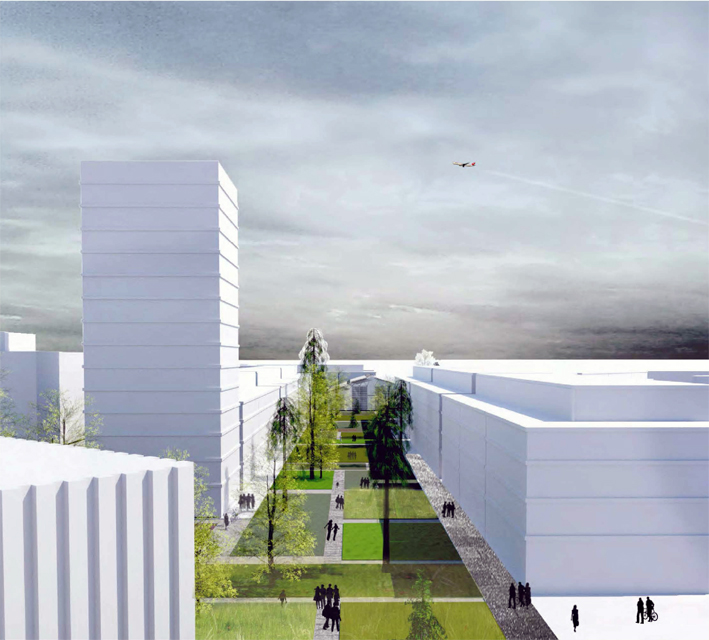 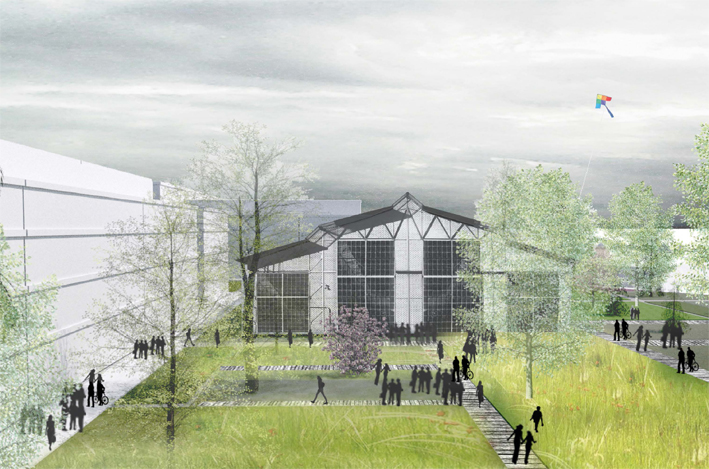 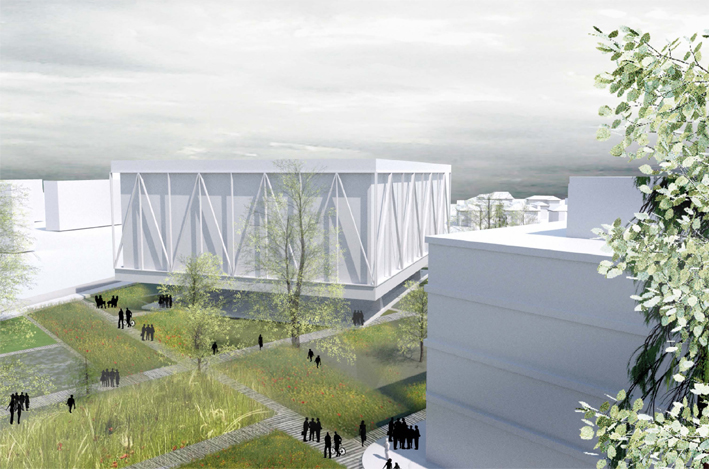