CREATING PROXIMITIES
In the physical space of the city, but also at temporal and actors' scales, it is about establishing proximities between living and working both within residential areas and between residential areas and monofunctional production zones. It is also about rethinking the transition between high-speed metropolitan mobility and the low speed of neighbourhoods.

Third spaces in-between
A third space is a new space inserted between housing and production areas that can catalyse the transformation of current production cycles by creating synergies with urban territories and everyday life. It can be located in residual spaces within neighbourhoods, between existing monofunctional zones or emerge from recycled urban fabric. 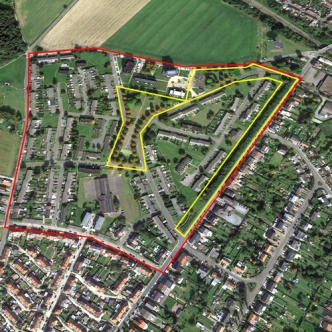 Owner of the site Centr’habitat

Following the closure of the coal mines and the industries (mainly steelmaking and metalwork) that brought prosperity to the Centre region in the Province of Hainaut in Wallonia, the economic reconversion was a major challenge. The unemployment rate in La Louvière is 17.9% (2016). Projects for the gradual reclassification of the brownfield sites around the site have been managed by the city of La Louvière, with the multi-functional nature of the programmes leading to the productive town of the future as a common thread. It is therefore quite natural that this “reclassification in progress” spreads to the “dormitory town” to activate its transformation into a productive, lively and dynamic area.

The mutation of this single-function neighbourhood into a productive town could be brought about through various approaches, for example, the installation of multi-use buildings or the creation of a productive street to the scale of the neighbourhood. The filling in of wasteland within the area by productive activities or local micro-agriculture could also be studied at a later stage.
The strategy is two-fold:
- open up and connect the neighbourhood to its surrounding environment via soft connections to the town centre and the multimodal platforms, as well as by connections to urban areas that border it or will do so in the future.
- foster employment by creating areas within the neighbourhood that can stimulate the development of micro-, small- and medium-sized companies.

The strategic perimeter is located 2.5 kilometres from downtown La Louvière and the railway station. It is bordered by a major network of entry and link roads, agricultural zones, a joint development zone covering several hectares, an old slag heap, the old Saint-Vaast social housing estate (in which all the housing units have been sold) and detached house developments. Except two schools and a community centre, the site only includes 500 homes (either new or renovated), of which more than 400 are social housing (houses/apartments) together with quality public areas.
The project site mainly consists of an undefined central green zone and a linear strip that creates a physical and visual break with the rest of the urban sprawl.

The programme envisages the integration of a multi-use building, connected to the public area and the recently-built dwellings. The implementation of production modules on ground level, compatible with multi-storeyed apartments (around forty), will mean that the residential area (monofunctional to date) can be revitalised.
The size of the modules will be adapted, depending on the activity developed.
The programme also envisages the creation of a productive thoroughfare through the work on the linear strip located in a section of Emile Urbain street, which borders the site. This strip (almost 500 metres long) will be reworked sequentially to allow, on one hand, the creation of openings and connections to the rest of the urban area and, on the other, the installation of shops and other local services, “micro-, small- and medium-sized companies” with unloading and storage areas for the smooth operation of the activities.

Can we propose a new configuration of those streets (north of the site) that interfere in the lote in order to not interrupt the pedestrian walkway that we would like to propose?

Roadway modifications are not foreseen by the Owner who does not have any funding for this type of work. It will, however, remain open to all proposals regardless of whether or not they deviate from the basic recommendations.
Remember that Europan is above all a competition of ideas. Thus, any proposal will be analyzed and judged according to its coherence and the relevance of the project.


The size of the mixed-use building (height, number of levels) and the number of apartments are not taxed. It is left to the discretion of the candidates. As an indication, the housing building that was demolished had about twenty apartments.
Regarding the typology of housing, it will take into account the different types of households including single-parent and blended families.
The Owner wants a mix of typology while avoiding the concentration of large housing in the same place.

Could you please quantify how much sqm we have to consider for a shop that have to host a "very small" and a "small" business?

Could you please specify the height, number or floor, number of apartments for the mixed use building? It has to have parking? If YES what kind (underground, ground floor, etc.) and how much?

For the first part of the question, please refer to the identical question of April 12 (see above)

The existing underground parking has a capacity of approximately 40-50 places. This capacity is considered sufficient for future occupants.
Air parking should however be included in the proposal for visitors to housing and people related to the activities that will be developed on the ground floor.