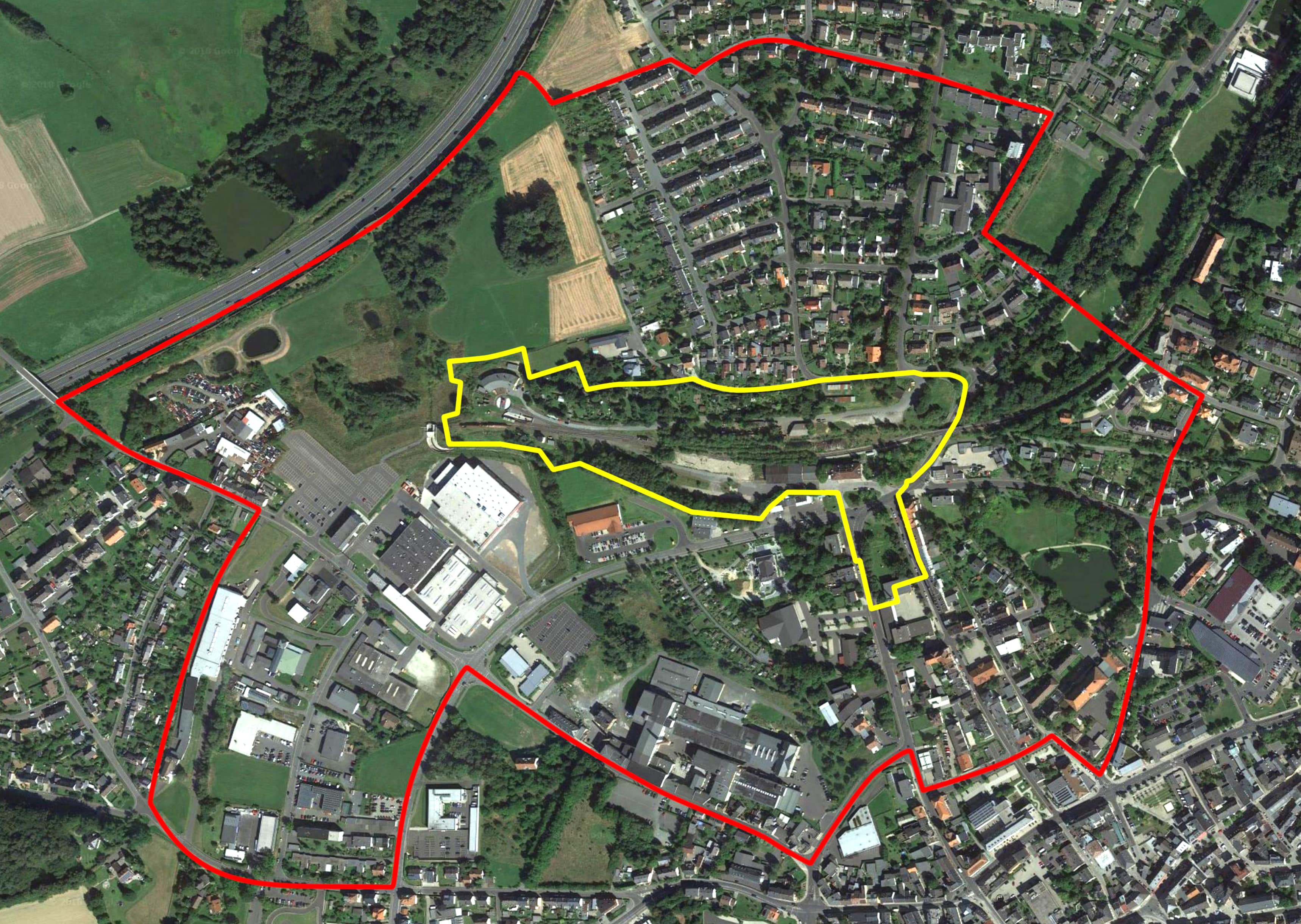 Site proposed by City of Selb

Owner of the site City of Selb, private owners

Directly at the South-Western border of the station area, a local small medium business, which expanded its production capacities in the last years and increased the number of employees considerable, has its production halls. South of the area is a supermarket. At the station square and in the street to the station, some companies are present (restaurants, a petrol station, trade). Currently, the site lacks attractivity regarding the urban layout and the proposed selection of uses. The goal is to create an attractive location for living and working through extensive urbanistic actions like revitalization of the public space and reconstruction with attractive building ensembles.

Through revitalisation of the inner-city fallow land and the improvement of the urban situation around the station, a contribution to the inner development should be made. Selb, as the whole region, is in need of good and individual adaptable living spaces, especially for rented flats. Additionally there are only few inner-city areas for possible new construction of apartment buildings. Therefore a reconstruction, at least partly, with apartment buildings or town houses is wished for. A mixture with undisturbing businesses with a relation to the small scale character of the town is desired. The new station quarter should have optimal traffic connections to the different parts of the town.

The area is located approx. 400 meters north of the city centre. The empty storage facility and the adjacent mostly empty station building are influencing the city image negatively at a prominent position. The approx. 4.5 ha large area around the station has lost its historic significance because of the immense decreasing train traffic in Selb. There are function deficits. Large parts of the area are fallow lands. In front of the station, the Goetheplatz and the following Bahnhofstraße have also urban and functional drawbacks. The Goethepark south of the square is not recognized at the moment and should be rethought.

The traditional porcelain industry had its production facilities from their beginning in the middle of the city. Also, a lot of the again thriving small medium businesses are producing, researching and administrating on integrated and inner-city areas and influence the industrial image of the town to this day. The outsourcing of production to the city borders and the separation of working and living are phenomenons of the younger past in Selb with only few examples along the motorway A93 in the West. The city wants to strengthen the tradition of inner-city production with the renewal of the station area and the adjacent spaces. Possible integrated spaces for the extension of existing or new commercial areas are hard to find at the moment.
Also, attractive inner-city locations for small businesses or creative users do hardly exist. The city of Selb wants to raise the unused potential of the station quarter. This space should get a modern and urban flair by introducing a mixture of housing, services and producing businesses with design elements that relate to the important industrial and train heritage of the town. In the long-term the station area should be connected to the city centre and the new Outlet Center by urban impulses. Together they should form a new, attractive middle of Selb. 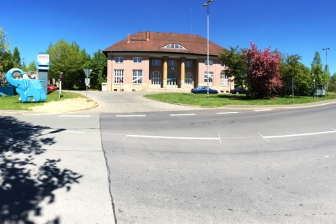 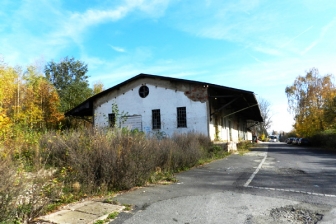 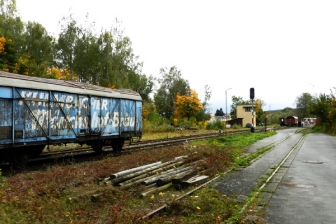 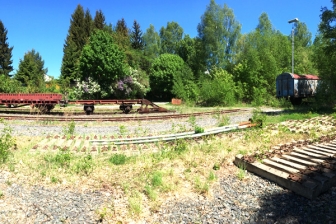 Old train tracks - environment growing back on the vacant space

Is it possible to get plans of the station building?

Yes, the plan are labelled DE-SELB-PS-M4 to M7.

Dear organizers of the Europan Contest, In the available topography map there are only topography curves but no height numbers at all, which makes very difficult to determine the direction of the slopes. Could you provide a new topography document with this information? Thank you

Yes, see DE-SELB-PS-M3.dwg/.pdf for details on heights. We apologize for the delay.

Hello, is it possible to get - beside the ones for the station building - plans for the other listed buildings in the planning area?

Unfortunately, no.
Both buildings are private property and in difference to the station building, the city is not intending to buy them in the future.
Nevertheless, the train club should be considered as a programmatic feature.

Yes, the allotment gardens should be preserved in the given area. Pathways for pedestrians and bicycles are desired. Unfortunately there are no detailled plans that show more than the given plan material.

Is it possible to realise a level crossing (perhaps with spring bars) of the train tracks (in the section from the train station towards east), for pedestrians, bikes and cars? Or is it only possible to cross the train track through a bridge above or a tunnel below?

In the part East of the station, a crossing is only possible through the existing underbridge (pedestrian, bicycles, cars). Nevertheless, in the part West of the station building all kinds of crossings are thinkable.

The tracks do not have to be preserved. There are other possibilities to transport the exhibit to the engine shed.

Would you be able to share the expert reports containing relevant information about contamination (as stated in the brief)? Which information are available concerning the contamination on the project site in general, in the train tracks area and the scrapyard area in particular?

There is contamination in the area. Especially the area of the scrapyard, the train tracks and in the area south of the freight building (RKS 17) need to be decontaminated as it is possible that the groundwater is affected. In summary there is an estimated amount of 27.400 m3 excavated material for disposal. That means, that mainly in the three contaminated areas, 0,8m of the surface needs to be removed (please see DE-SELB-PS-M8.pdf as reference).

Is it compulsory to preserve the signal tower ("Stelwerk"), is to be considered as a monument, or it is just recommended to preserve it as a landmark witnessing the past use of the area?

The Stellwerk is private property and a listed building. Therefore it should be preserved to form an ensemble with the also listed engine shed.

Please see DE-SELB-PS-M9.pdf as reference. There are only few areas that need to be preserved.

It is required to draw two site plans (1:1000 and 1:2000) on the first two panels. Is it possible to draw at least one of these as a scaled axonometry?

Yes, but please stick to the scales. Thank you.


CREATING PROXIMITIES
In the physical space of the city, but also at temporal and actors' scales, it is about establishing proximities between living and working both within residential areas and between residential areas and monofunctional production zones. It is also about rethinking the transition between high-speed metropolitan mobility and the low speed of neighbourhoods.

Interfaces and short cycles
The creation of interfaces contributes to the transformation of infrastructures of mobility, logistics, commerce or general services, by shortening production cycles, and generates new kinds of relations between residential and farming activities, between housing and services, between spaces and communities. Interface is a fluid space on incremental and adaptive processes, rejecting predefined master plans.