IMPLANTING
Ensuring the cities to be both productive and sustainable, they have to interlink resources, mobilities and conditions of fairness so that to create new dynamics according two aspects: productive milieus and productive uses.

Productive uses
Uses can become productive if they go beyond their own functional limitations: productive uses work as a trigger that can initiate dynamics of change in a way that transforms the surrounding environment. They are a response to a situation in which an absence of dynamics has led to a powerful "use-ambition", the demand for a credible programme, a catalyst for change that fits smoothly into the existing context. 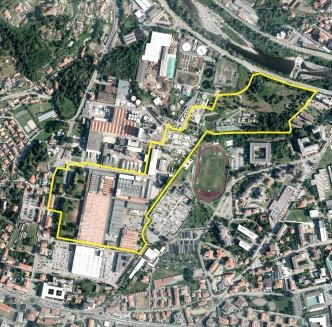 Owner of the site Private

Commission after competition Workshop on the site with the rewarded teams

Verbania is a North-East city of Piedmont overlooking Maggiore’s Lake. It is the capital of the spread Province of Verbano-Cusio Ossola. The city has seen a gradual divestment of the industrial production sector. Today the traces of decline and abandonment of productive sites, that were once vital, are still visible within the urban fabric. The de-industrialization processes were only partially offset by the growth of the services and tourism-hospitality sectors. The re-functionalization and re-use of the former Acetati industrial area and its surroundings will contribute, also from an architectural side, to creating a new urban fabric characterized by a functional mix linked to tertiary, cultural, leisure and sport activities, that can connect the different urban areas.

Verbania is experiencing a period of great social and economic transformation, where the traditional manufacturing sector, it has gradually been replaced by service tertiary, commercial, office, tourism and hospitality, also highlighting a positive seal of the craft sector. The former Acetati area is the site of the possible connection between different urban sectors: the village of Pallanza, Madonna di Campagna, S.Anna and the district of Saxony on the left bank of the Torrente S.Bernardino. The City challenge is the creation of a new urban fabric and new spaces for the strengthening of the tertiary sectors and the production linked to recycling and reuse, leisure time and sporting practice, capable of generating a new connection between public spaces and structures existing. Technical-economic solutions are also awaited by the designers to carry out the work.

The former Acetati site is located at the hinge point of the two main ori- ginal centers of Pallanza and Intra. Its position is strategic because it is central to the urban morphology, accessible to services and full of potential for redevelopment. At present, dismantling of the production plant and environmental characterization / reclamation have already been carried out. During the period of its maximum productivity, the neighboring residential area called S.Anna was created. In front of the main entrance of the factory is the church of Madonna di Campagna, with a particular historical-monumental value, which, despite its toponym, is nowadays incorporated into the building fabric of expansion.
The fence of the wide productive site and the cemetery, owned by municipality of Pallanza, for many reasons and historical times, represented an obstacle to the city’s growth. The regeneration program of the site started with the great interest of the stakeholders to recover the decline of industrial activity through the enhancement of the real estate assets, its re-insertion into the urban fabric and regenerating the work force in the area of Verbania. In the elaboration of the masterplan on the redevelopment of the Acetati area, it was thought: the reduction of existing buildings, to the advantage of the increase of green areas and spaces for roads and services; the recovery of most of these existing buildings to reduce the impact of demolitions and preserve the historical industrial memory by evaluating a mix of service, tertiary and commercial functions, also capable of rendering portions of the territory which have always been closed to the public, such as the urban parks existing inside the establishment and the cycle-pedestrian routes.

Following the decline of the era of heavy industry, the places of production become widespread and the way of working is increasingly im- material. In addition to the tertiary sector, it is important that diversified production methods are located within the site. We need to think of a new productivity that adapts itself to a context that favors smaller spaces and able to satisfy the rotation of activities, favoring the concept of recycling and reuse with low or zero environmental and energy impact. The creation of a context of public and private spaces, in analogy with the urban building structure typical of a consolidated urban center, will generate a place of attraction for different types of users and a place of reconnection with other urban spaces.

Hello, is it possible to have the 3D volumetric file from which the views in the documentation were obtained? thank you

The provided document "Map-with-demolition.pdf" indicates specific buildings to be kept or demolished on site. By whom was the proposal made and how strictly should we follow it for our project? For example, can we propose to keep some of the building indicated to be demolished and the other way around?

The demolition map is indicative of the analysis made on the buildings and is not prescriptive. You can recover or demolish according to your idea, justifying the reasons and considering its feasibility

Concerning the project at Piazza-Fratelli-Bandiera uploaded on the site folder, do we have to take it as a given or can we propose a different design within our proposal?

It must be considered as existing, since it will be implemented.

What are the heights of the existing buildings of the site?

The heights of the buildings are indicated in the captions of the table "IT-VERBANIA-PS-M2".

In the brief and video, it is not clear which is the FINAL location of the 'Polo del Riuso' of Manitese. Could you please precisely indicate which EXACT building is defined as its final location. Thank you.

It was not explicitly indicated, as the current assignment is only temporary and also depends on your project. So do not consider the position as a constraint, but consider that the activities of Manitese can be allocated among the activities.

In the brief, specific functions are prescribed for each Zone - A, B, C (p.27). Is there a margin of freedom to renegotiate the location of these programmes according to our proposal? Thank you.

As explained during the meeting Lab in Verbania, by the architect Brignardello, there are specific functions (indicated in the three zones A, B, and C) that allow for making the europan project operational. In fact on the former Acetati there is already foreseen a detailed plan that will start from the results of the competition. The vocation of the three zones A, B and C has been outlined in an indicative way. But your project can include the various functions even in areas other than those indicated.