This article, produced for the Europan 15 catalogue of Results, tries to answer to a question: Nowadays, many territories are willing to take that level of intensity and real mix of uses, including productive activities. But could we consider the artisan component of the pre-industrial city as the solution to improve our environments in the digital age? How to anchor the uses of the next economy to an existing urban tissue or a rural area adding local values and inclusiveness?

“…I lived in one of the most distinguished streets, ... In the house in which I was living, sugar was boiled, which created a lot of activity, both night and day… My next-door neighbor to the right was a goldsmith and, to the left, lived a coppersmith. It is easy to imagine the frantic activities of the carpenters all day long, but the hammering and tapping…. Right opposite me lived a spur maker…”
The German poet Johann Rist provided us with this description of urban life in Hamburg in the middle of the 17th century.

Nowadays, many territories are willing to take that level of intensity and real mix of uses, including productive activities. But could we consider the artisan component of the pre-industrial city as the solution to improve our environments in the digital age? How to anchor the uses of the next economy to an existing urban tissue or a rural area adding local values and inclusiveness?

According to Richard Florida, “the urban/rural economic success is associated with the 3T’s: Technology, Talent and Tolerance”. The proposals included in this paper try to define the processes to create a high degree of acceptance of new credible uses. But which are the methods on the fabrication of these tolerance thresholds?
There are two main attitudes found between the awarded entries to deal with this notion of tolerance: types and fields.
Types tackle the issue of implanting believable productive uses from hybrid artefacts associated with small-medium scale architecture and linked to the public and collective space to conclude mixed-use urban fragments. Types are a strong device to host innovative programs and stress the latent potential of uses for a new dynamic to come in action. Fields are related to frameworks of different kinds: political, socio-economical, spatial, infrastructural or natural. The field condition of use is explored to generate coalitions to trigger prosperity and equity, negotiating the interest of owners, investors, and communities, as well as creating new circular environments at different scales.

SUPPORT AND INFILL
What are the specific uses to implant on a place as mediators between “the need and the wish”? The real need of a place versus the provocative wish to use ambition. Both poles are often included at the same time in a single proposal thanks to open and flexible spatial configurations to drive a programmatic evolution, following John Habraken's ideas to separate the physical infrastructure of buildings into “support and infill”.

Happy Valley (fig.1), one of the runners-up in Innsbruck (AT), draws a hub of dense activity along the river Inn, with a series of artefacts to be colonized on time with a well-being oriented mixed-use program led by the food industry. These “supports” are attached to public space and linked to the main local agencies –the university and the hospital– to ensure the programmatic feed in the future.
A collection of empty spaces is present in Even a brick wants to be something (fig.2), runner-up in Oliva (ES). The power of emptiness is stressed as a design driver in the preservation of the existing industrial warehouses with an atmospheric and sensitive approach. The refurbishment of the dryers and brick factories supports a productive scheme that is looking for the coexistence of sleeping uses at Rajolars. The paradox between density and emptiness is reviewed through a new relationship with the public sphere.


RICHNESS OF THE PRODUCTIVE USES
A new reading of productive activities as logistics, manufacturing or farming, could trigger the production of hybrid scenarios. Recoding the complexity of everydayness is a tool to explore the potential of very specialized uses. The role of the collective space arises as a referee for a better balance between production and consumption. The current cultural shift towards the “local” and the technological context allows new visibility conditions for the spectacle of logistics and manufacturing. The new Toyosu Fish Market in Tokyo is an example with a constellation of public programs organized around the tuna auction hall.
The winners in Wien (AT), Capability Mound (fig.3), propose a LAB to define a new urban identity capable of catalysing mixed situations, where production, distribution, consumption, and housing happen simultaneously in a natural environment. “A linear hof” promotes the spectacular void of logistics –referred by Nina Rappaport in “Vertical Urban Factory”– as the necessary condition to involve the collective in the cycles of production, consumption, and recycling. The banal spatial conditions of logistics are subverted to become the spine of the scheme.

On another scale, the special mention in Uddevalla (SE), Plant Uddevalla (fig.4), starts a process of regeneration through the land restoration of invisible landscapes by planting trees with a new environmental sensibility. The first step is a greenhouse (a tree nursery) that provokes a new imaginary of the collective and a vision of a production facility for the 21st century. Could a warehouse be as memorable as a library?

MEMORY OF PRODUCTIVE LANDSCAPES
The memory of a place, its former natural and productive resources, can be powerful tools to attract new economic dynamics. Agricultural production and food manufacturing can be smoothly integrated into an ecological vision of a territory, managing the different seasonal cycles, as in the tourism industry. Some teams are dealing with different potential scales of superimposition of new proximities, as a cascade of metabolic loops.

The winning team in Oliva (ES), Productive Memories (fig.5), advocates for a reactivation of the territorial identity that has been asleep for decades. The entry is an action plan for a 20-year process of ecological transformation of the former ecosystems and its logic to rise the local economic activity. The backbone of this process is the reactivation of water cycles and soil regeneration, associated with food production and a program for local communities and tourists. The public space is understood as large agroforestry exploitation.

Also, the productive history is the starting point in the winner project A green settlement outside the wall (fig.6), in Visby (SE), where a collection of “green garden wedges” are inspired by the garden city town plan from 1934 and the former agricultural landscape of the site. The agricultural activity is anchored to the collective courts that play a morphological role in a porous housing area. Food production is a magnet for a diverse spectrum of Food Labs and small businesses linked to the main existing actor, the mall.

USE AS A VERB
In the absence of density of use, a common approach is to promote bottom-up processes to involve citizens as the main substance of transformation. “Use as a verb” is an adapted version of the essay by John Turner “Housing as a Verb”, where the failure of the conventional model of top-down decision-making in housing is showcased (“housing as a noun”), versus a more bottom-up approach where dwellers can create their own environments in close relation with economic opportunities (“housing as a verb”).
Based on this attitude, a process of transformation of the Acetati area in Verbania (IT) is showed by the winning team in Landscape in-between (fig.7). Architects emerge as curators of an open and no-ending plan to create a new community called Lab Acetati. The first step is the appropriation of the land by pioneers and the co-production of a new collective imaginary. In a second step, the land is organized along an ecological corridor, a productive promenade to guide the next phases and the arrival of new uses. Also, the winning entry in Uddevalla (SE), Jalla! (fig.8), explores the figure of a linear and productive “red promenade” to reconnects the different urban fragments attracting hybrid buildings with local manufacturing, and triggering the local community engagement.

As an answer to the functional segregation of an archetypical modernist plan, Hartland (fig.9), the winning entry in Rotterdam Groot IJsselmonde (NL) divulges a new model for a 21st-century garden city: A pilot for socially inclusive suburbia connected with its landscape, a social engineering plan based on a Solidarity Fund, integrating an ecosystem of non-profit housing associations, neighbours and entrepreneurs. The trigger of the process is an operational public-private framework, which is followed by the first facilities and public space investments. In the next phase, a diverse catalogue of plots is developed by different forms of ownership and economy activities towards a future-oriented productive suburb.

Ecological Magnets, runner-up in Pays de Dreux (FR), also explores a methodology for a new productive rural landscape. The process-project is based on a system of mutualisation of enterprises for a productive countryside model dealing with the four ecologies of the region. The method works with a sequence of four steps over time: structuring the land, sharing common uses, exchanging fluxes, and mutualizing activities. It is tested with specialized uses in the three villages: a collective bio canteen in Tremblay-les-Villages, productive villas in Brezolles, and an R&D bioproduction pole in St-Lubin-des-Joncherets.

“Intellectual breakthroughs must cross hallways and streets more easily than oceans and continents” - Ed Glaeser.
Only by finding the missing links between the Hallways and the Oceans, between the Types and the Fields, will it be possible to develop inclusive urban and rural models, where productive uses can become an essential component again, capable of ensuring prosperity for all.
Can new proximities be the starting point for a better balance between living and working? 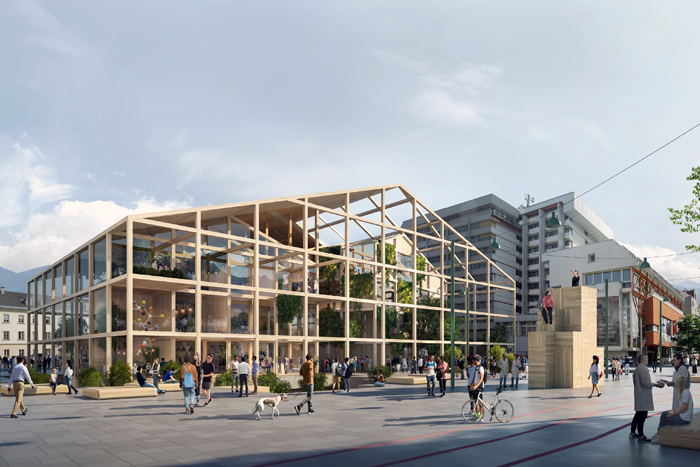 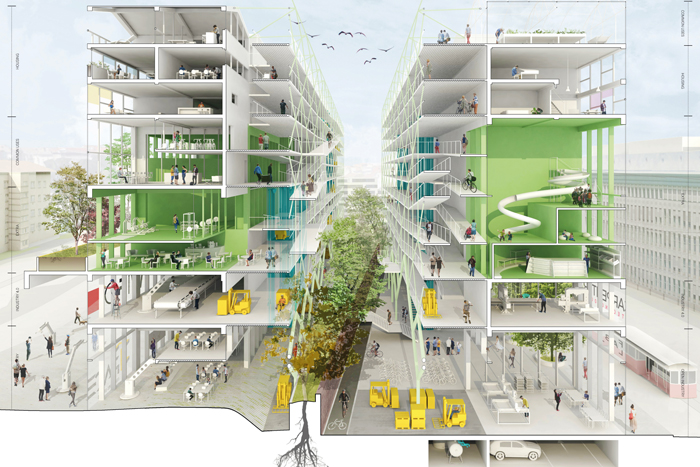 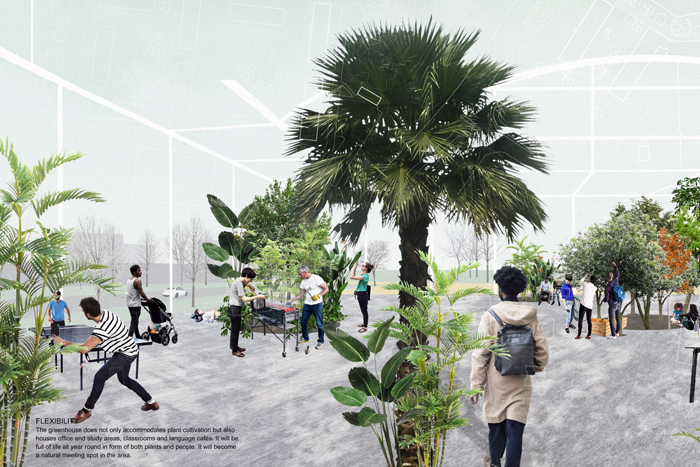 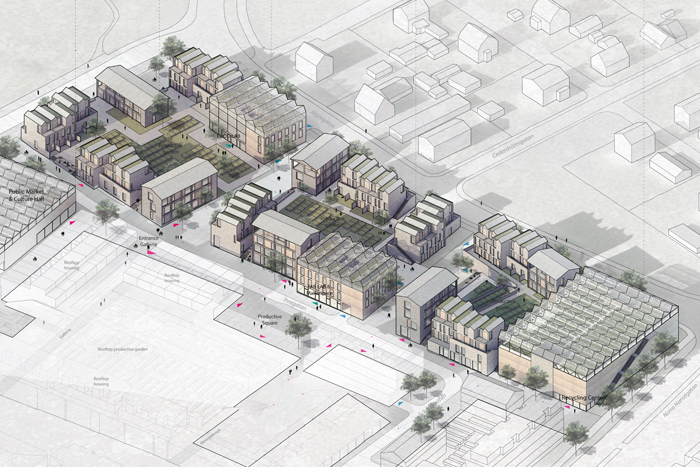 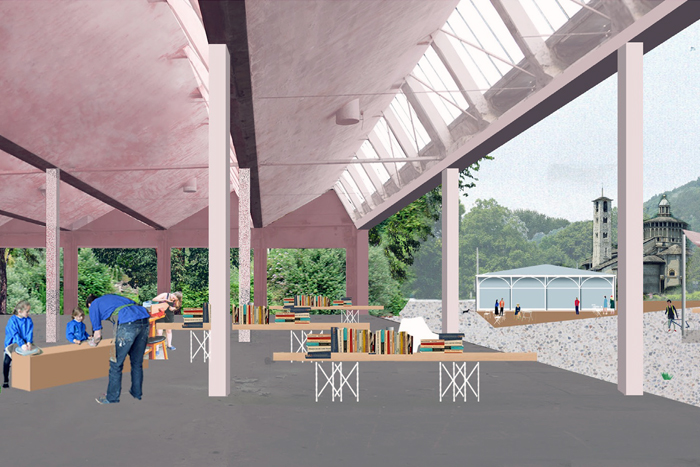 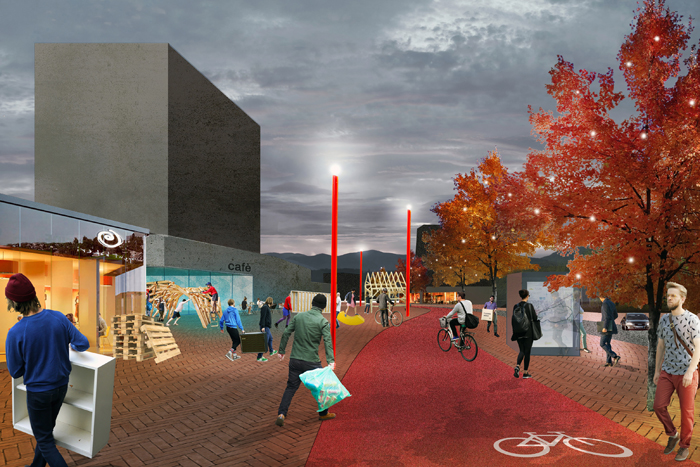 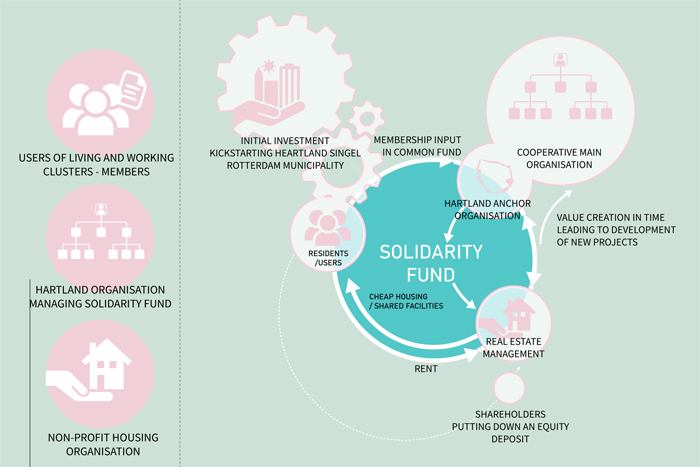