INTERVIEW
Click on the images to enlarge
1. How did you form the team for the competition?
Our team was born out of the encounter of young architects, landscapers, urbanists and sociologists conscious that their respective professional practices must evolve and dialogue between themselves to fully integrate the issues of our time. We have all, in one way or another, lived a diversity of experiences and acquired a critical eye through our training, which is often hybrid, or through our professional experiences in architecture and landscaping agencies and in regional authorities. Furthermore, the members of our team have had the opportunity of collaborating in the past either within the same agencies, schools or competitions.

2. How do you define the main issue of your project, and how did you answer on this session main topic, Living cities?
Our project starts from a simple assessment:  modernity has altered the links that the inhabitants could formerly entertain with specific territories like the one in pays de Bray where the Auneuil site that was proposed for the competition is located. By promoting standardized way of living, our society has ended up impoverishing these rich and singular links (ways of building, of moving, of working, etc.) Through the multiple meetings we had (economic powers, inhabitants, etc.) we observed the disconnect in between the knowledge, the know-how, and the clay country. Of that history tied to the subsoil, there remain architectural marks. It then seemed evident to us to reveal those vestiges by including them in the future developments and purposes of the project, as the Boulenger factory which will be redefined as a Pottery School. The school as a place of collective education, of transmission and a thought laboratory weaves the links between generations. We therefore worked to create this place, this shared foundation, capable of reactivating and rallying the assets of the territory. In Auneuil and in Pays de Bray,  what makes the link between generations is the soil: it is at the same time a rooting place for its inhabitants, matter modeled by a know-how very specific to the territory and an element of heritage.

3. How did the issues on metabolic and inclusive vitalities and the questions raised by the site mutation meet?
The project site presents a remarkable heritage not only from an architectural point of view -the outcome of a long economic tradition and forgotten vernacular building practices- but also from a biological standpoint. By looking over the Boulenger factory site, we were struck by the way in which non-human presences had appropriated the space. In a paradoxical fashion, whereas the anthropogenic presence has broken-off with the deindustrialisation of the territory, the inactive old faience tiling factory fosters a different form of life. The question is then to know how that living heritage from a biological point of view can come into resonance with new forms of anthropogenic investigations without having one of the two systems of forces altering the other, and showing which are the ways of finding mutual and inclusive synergies.
4. Have you treated this issue previously? What were the reference projects that inspired yours?
Through our professional experiences, we have been brought to deal with issues such as structure rehabilitation, inclusivity and integration of the living world within diverse urban projects. As such, part of our team has already had the opportunity to work on the issue of inclusivity in a place in Lyon, where the competition subject was specifically oriented towards gender equality in public spaces. On this occasion we understood that beyond the formalism expected of our proposal, it was a work on the processes, on the establishment of the conditions of change more than on the change itself that it was necessary to engage to trigger the desired dynamics. As part of the “CONSTRUIRACIER 2020” competition, on the theme of Turbulences, one member of the team worked on the former industrial zone of Chalon-sur-Saône. The cranes, the rolling gantries and the old grain silos became the tools of construction and experimentation of the teaching space. A coherent response to sites whose history represents a strong potential for reinvention. Beyond reference projects, it is the site itself, our meetings with its inhabitants and its living forces, as well as the various exchanges around our readings and a critical look at our respective professions that allowed us to come up with this proposal. These first intuitions, resulting from our research and field experiences, were reinforced by the knowledge of similar projects prioritizing the reuse of materials. Among them, the “Cycle Terre” project, which reuses the excavated soil from the “Grand Paris” project to make construction materials. The emergence of workshops and training around the clay sector has also been a source of inspiration.
5. Urban-architectural projects like the ones in Europan can only be implemented together with the actors through a negotiated process and in time. How did you consider this issue in your project?
This is one of the key issues of a project. On the one hand, there are the expectations and desires of citizens and politicians that are obviously legitimate, but on the other hand, there are realities that have until now been set aside or simply forgotten. The first step is to explore these alternatives to make other ways of living desirable by reconciling desires with realities while convincing citizens that these projects serve their own long-term interest as well as a collective – meaning universal - interest; a common good, beyond a human perspective,  able to respond to the multiple crises we are going through. Moreover, the issue of the process directly questions the issue of metabolic vitality, in the sense that it requires the activation of the dynamics necessary to literally bring this project out of "earth". There is fundamentally a relational aesthetic to invent, explore and share. Some connections in this process can emerge spontaneously. In this regard, we can take the example of a craft such as pottery. This practice allows the potter to establish multiple relationships both from man to this clay soil that makes every gesture unique and creative, every moment of his life, but also between men themselves who then weave relationships of curiosity, desires for transmission of a tangible and immaterial heritage. In short, it produces an enriching human experience, triggers a sense of pride in belonging to this living heritage and restores individual and collective meaning. Showing these different biological, political, economic or artistic links can both arouse vocations and encourage desirable collective actions that can in turn find new sources of legitimacy. However, we are aware that some of these links will not start on their own and will have to require specific human and financial resources. The involvement of actors, whether institutional, associative, citizen or economic, will be necessary to perpetuate the School of Clay Arts and partnership forms will have to explore original and time-adjustable avenues. In this respect, our proposal leaves room for other forms of partnership to exist, to the transitory, the adaptation and the unexpected. This relational design seems interesting to us as it does not freeze an approach but on the contrary makes it dynamic and therefore appropriable.

6. Is it the first time you have been awarded a prize at Europan? How could this help you in your professional career?
This is our first participation in this contest. We have the feeling that the Europan approach today gives young designers, from increasingly diverse backgrounds, the opportunity to engage in approaches or to put in visibility types of action alternative to a system of "production" of the city that only accentuates the crises. This competition is a hope that has allowed us to build common values, to formulate deep exchanges and to forge enriching human ties; links that we wish to perpetuate through the creation of a collective. Our collective will aim to consider the territory as a process, a construction resulting from the interaction of a geographical base and living forces, of which man is an integral part.

Has your team, together or separately, already conceived or implemented some projects and/or won any competition? if yes, which ones?
Yes, part of the team was formed during the national gender ideas competition “La ville ensemble, toutes et tous” organized by the Cercle de ZAHA in Lyon in the place Jean-Jaurès. Our proposal, "Le jeu des Dames” (the game of Checkers), by its form itself, was conceived as a public space aimed at inclusiveness in the form of a playful and educational process that can be adjusted over time. The project was awarded with the special jury prize. One of the team members submitted his diploma, carried out in pairs, to the CONSTRUIRACIER 2020 competition. The “Fenêtre sur Saône'' project deals with the reactivation of a former submersible industrial zone. Cranes, gantries and old abandoned grain silos are the construction and experimental tools of a Research and Training Center in Architecture and Engineering. The project received the third prize in the CONSTRUIRACIER 2020 competition. 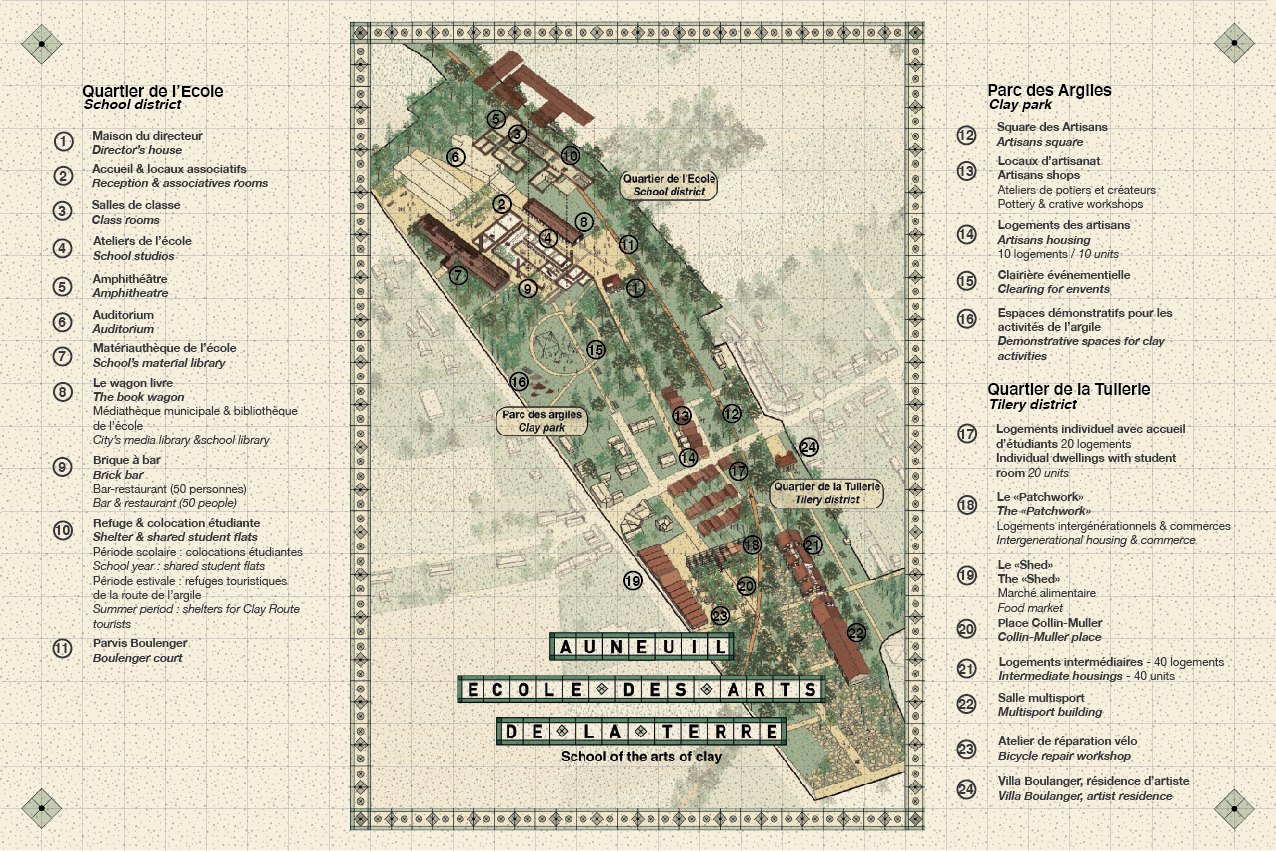 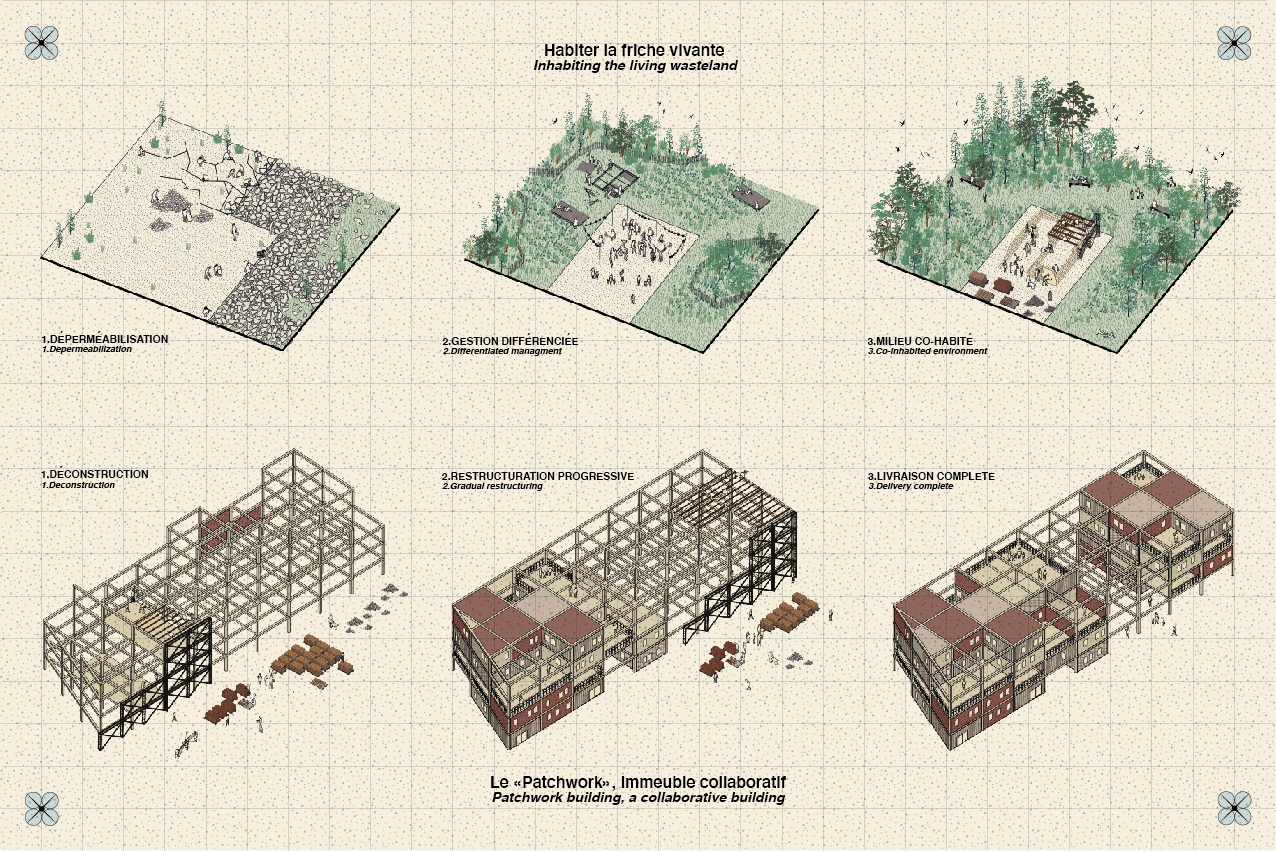 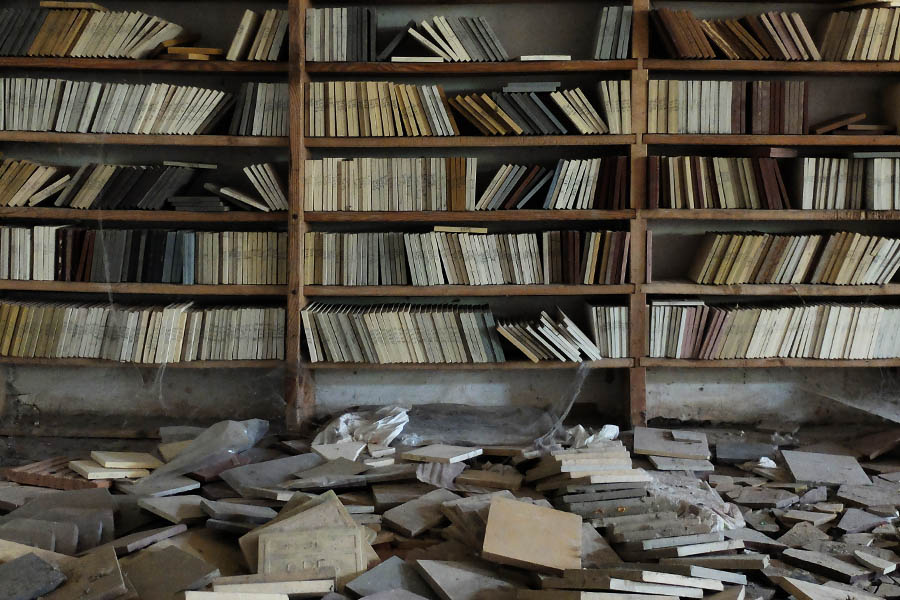 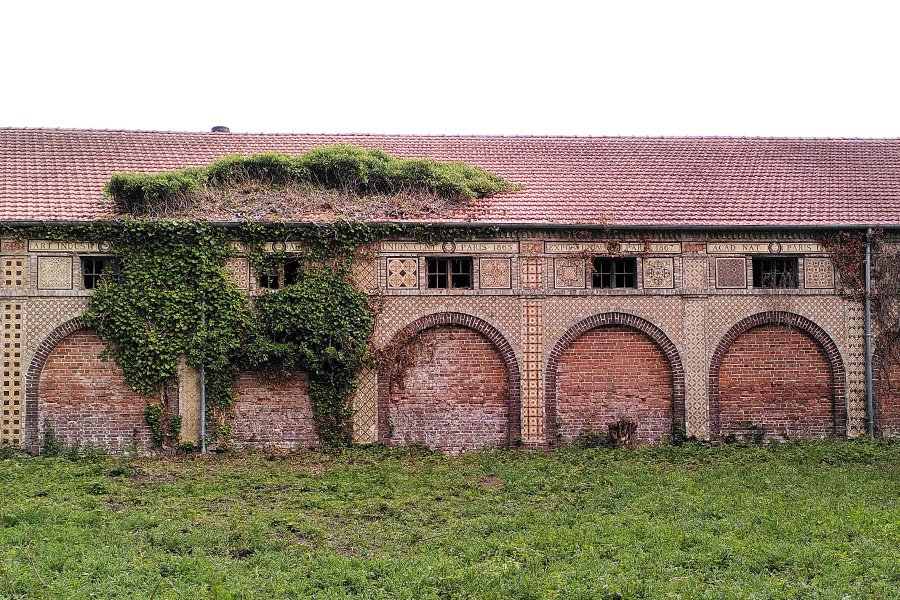 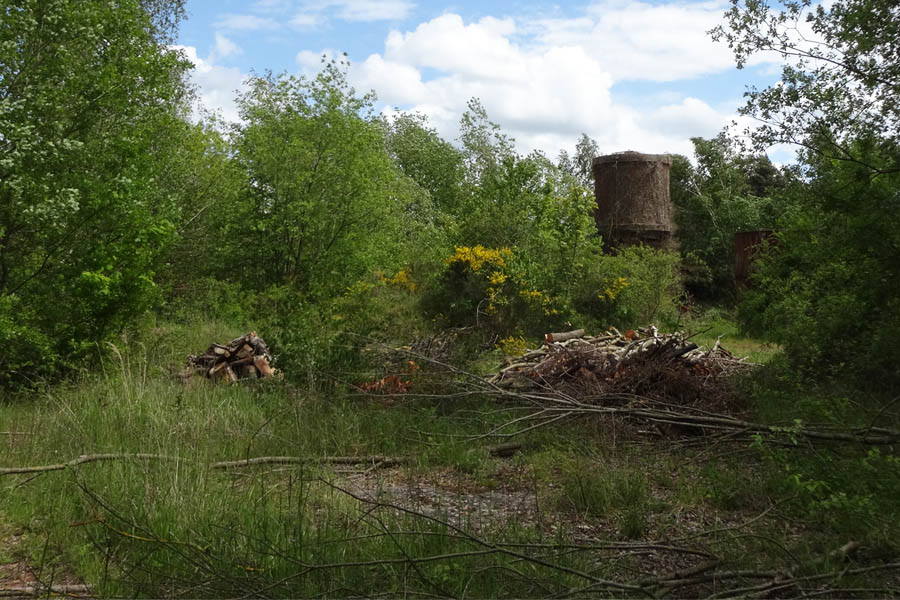 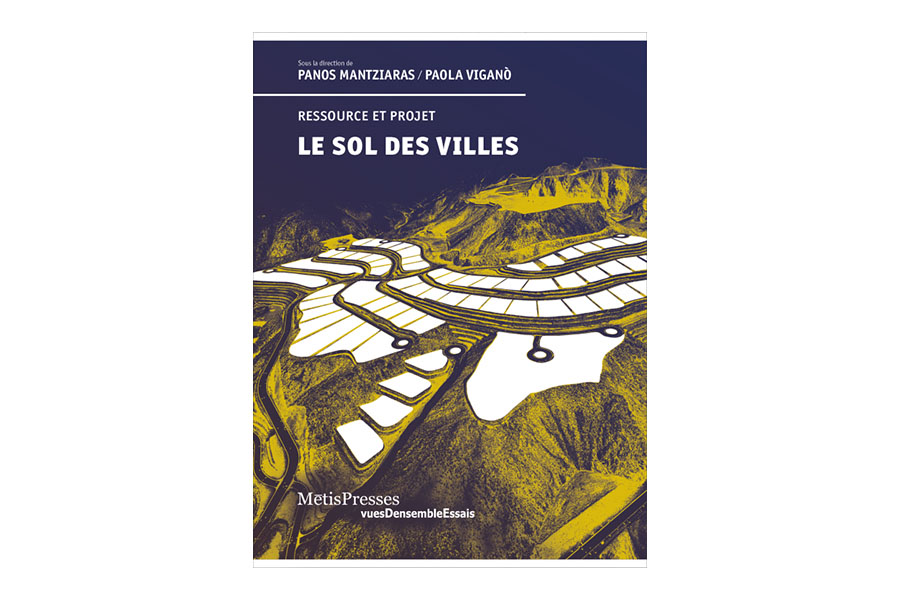 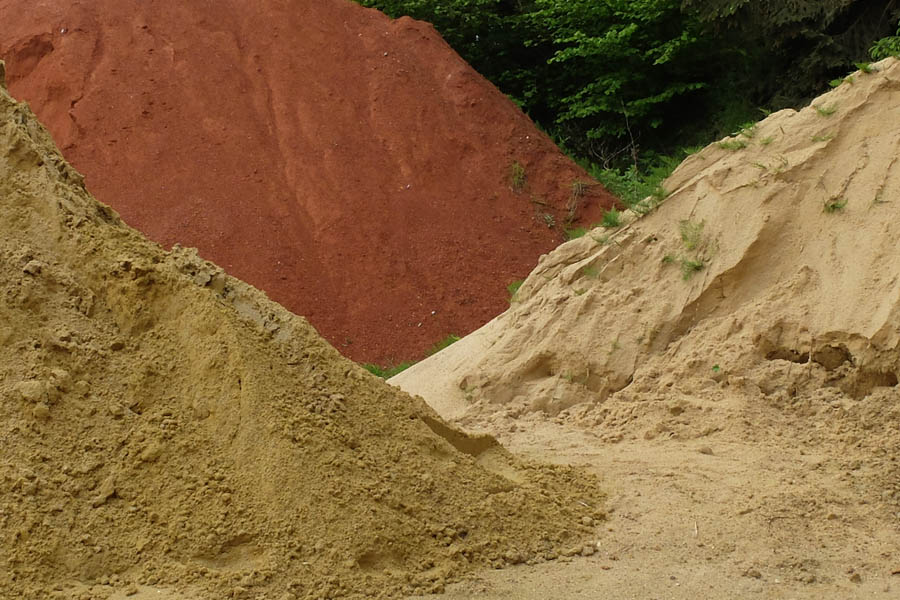 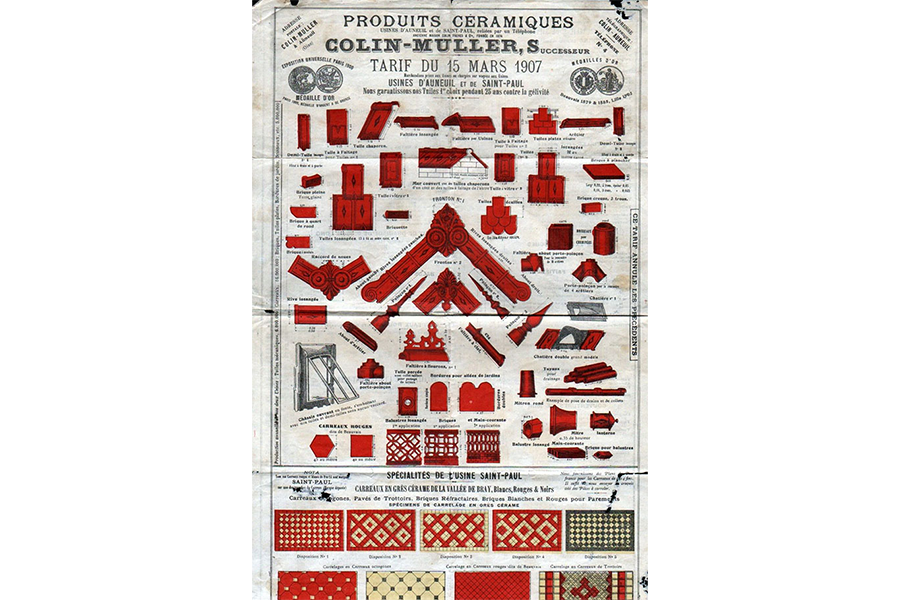 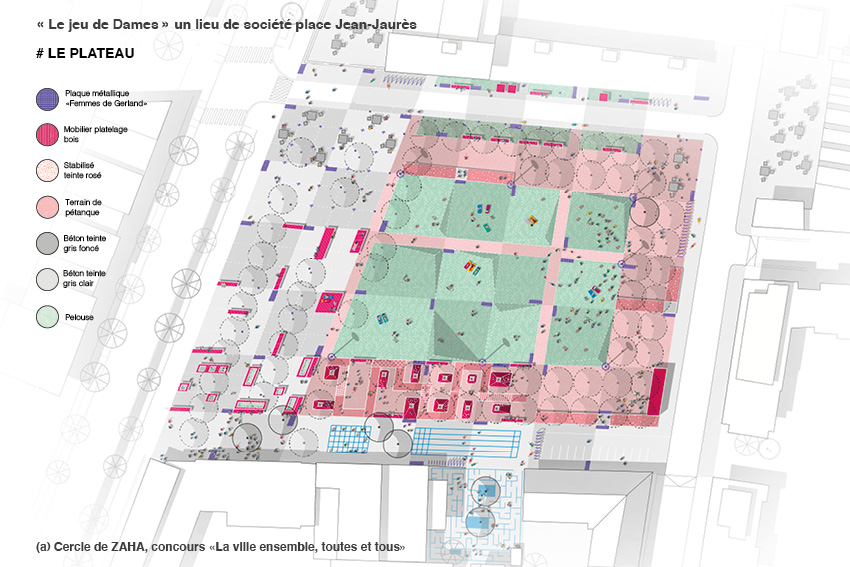 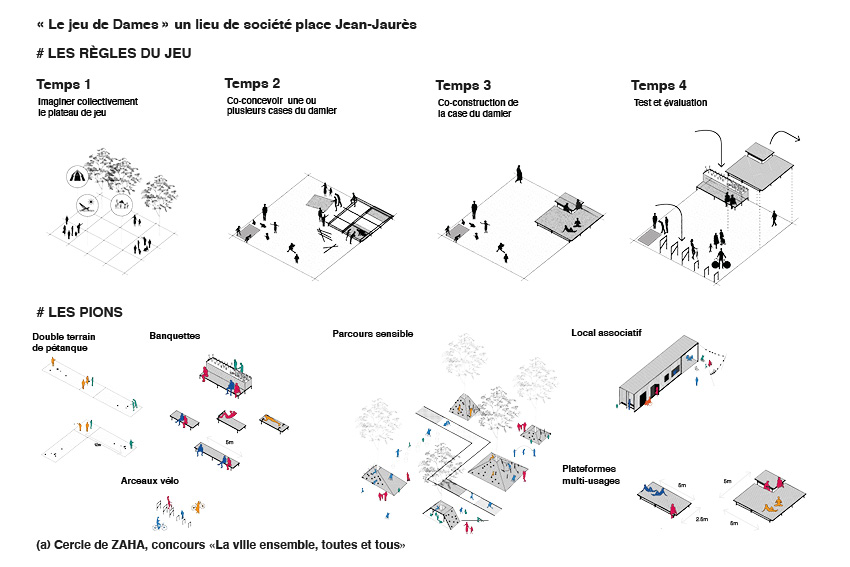 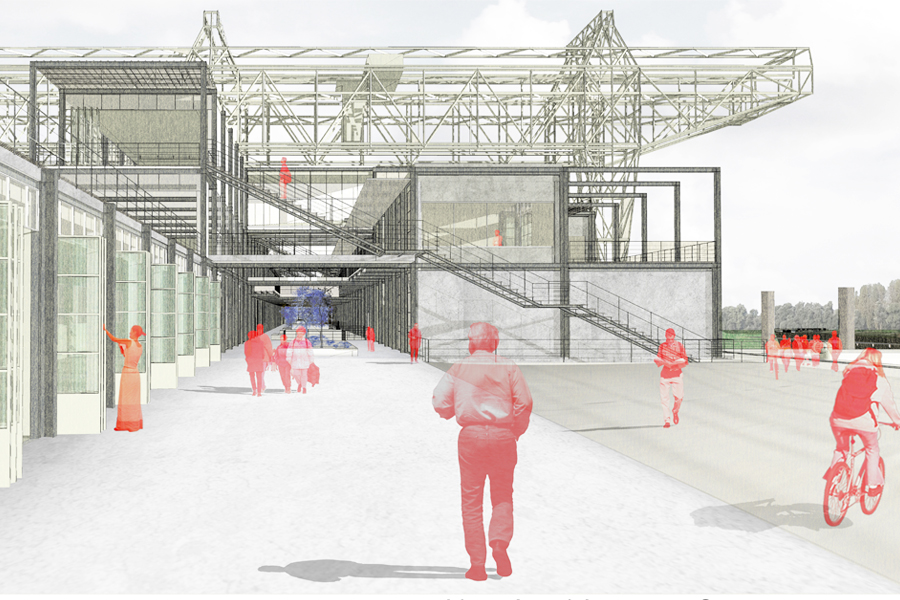