CREATING PROXIMITIES
In the physical space of the city, but also at temporal and actors' scales, it is about establishing proximities between living and working both within residential areas and between residential areas and monofunctional production zones. It is also about rethinking the transition between high-speed metropolitan mobility and the low speed of neighbourhoods.

Interfaces and short cycles
The creation of interfaces contributes to the transformation of infrastructures of mobility, logistics, commerce or general services, by shortening production cycles, and generates new kinds of relations between residential and farming activities, between housing and services, between spaces and communities. Interface is a fluid space on incremental and adaptive processes, rejecting predefined master plans. 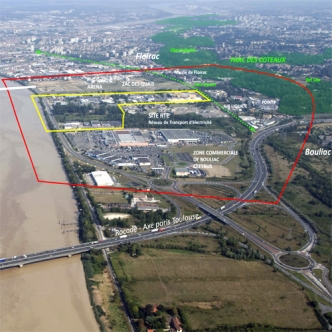 On the edge of both a dense city and the Euratlantique project site, the Garonne Plain southern sector appears as a territory of juxtaposed, isolated, self-sufficient parcels or activities: a shopping centre, sensitive industries, an artisanal zone closed off from the nearby neighbourhoods under constructed, etc. However, this territory has untapped resources: an entrance to the metropolitan area, accessible riverfront, proximity to a large nature area, etc. The productive city here consists in creating an "interface site" that will lead to urban de-compartmentalization. It raises issues of accessibility and connection, openness to the countryside, reintegration of natural and ecological stability, but also issues of programming and architecture that could transform the image and role of this new metropolitan gateway.

Right bank municipalities in the Euratlantique OIN urban plan are experiencing intense urban development, largely housing projects that are replacing former businesses. By reaffirming economic, industrial and productive roles for the Garonne Plain southern sector, Bordeaux Métropole, Floirac and the EPA are expecting from the Europan competition proposals that interweave urban and nature and include the abandoned Eymet railway line, connections from the plain to the surrounding hillsides and a new relationship to the river. The aim is to reconnect the site to the surrounding countryside, improve quality in the Jacquotte business park and increase openness toward the residential neighbourhood. They should also consider future use, presence of nature and constructability on land along the Garonne that establishes a dialogue with the property owners who are partners in the Europan project.

The strategic site is partially on a flood plain and includes the Bouliac shopping centre and the docks ZAC urban development zone (1,400 housing units, 40,000 m2 of business, Arena hall) with access from the Simone Veil Bridge. Several sensitive industries including the RTE electricity distribution hub (225,000-volt substation for the city's power supply, 110 jobs) and Air Liquide (production and distribution of oxygen and gas for industry and health services), material and recycling platforms and various artisanal activities (La Jacquotte business park) are on the site. Vegetation and water are present on the site in several reforested areas, the esteys (creeks) and along the abandoned Eymet railway (proposed bicycle route that does not currently link to the river). Little known, little visible and unattractive, the project site is made up of private properties, which, in partnership with their owners, would gradually be transformed.

De-compartmentalize spaces, connect, make accessible: The urban diversity hoped for has more to do with interconnecting than hybridizing. Develop alongside the new Simone Veil Bridge new pedestrian, cycling and river accessibility through interfaces and connections to the docks ZAC, shopping centre, the town centre of Floirac and Coteaux Park.
Create a production area highlighting a metropolitan gateway: The Garonne Plain southern sector is the final stage of the Euratlantique project. At issue in the extension of the docks ZAC is development that works with existing activities (industry and small artisanal companies) and the landscape, ecology, and energy resources on the site between the Garonne and Coteaux Park.
Urban planning and architecture adapted to productive activities: The programme proposed aims to encourage companies and participants working in energy transition, renewable energy, innovative services and new forms of mobility as well as the creation of spaces for training, exchange and sharing.
Transitional urban planning: Cooperation between public and private sectors is necessary on this site, which is still in use. The competition should make it possible to come up with a common vision and goal for the site within the city and along the right bank of the Garonne. The subsequent project, developed in partnership with owners, encourages experimental thinking on the sites along the Garonne and for adaptation or adjustment in the artisanal Jacquotte business park.

Do you have any documents concerning the future Auchan (Ceetrus) project in Bouliac ? (program, plans...)

The studies are ongoing and can not be communicated now.

Do you have a more detailed plan of the Simone Veil bridge catch (drawing of the park, roads, pedestrian links ...)

Hello, The file has just been added to the complete file that you can download again. It is called FR-FLOIRAC-PS-M04.

Do you have a 3D model of the entire ZAC Floirac docks (sketchup or other) to see the proposed templates? Especially on the wastelands behind the parking of the Arena

We are sorry but there is no communicable 3D model.

Do you have information about the bus depot (number of lines, line specifically dedicated to Floirac or not) ?

At present, three bus depots (including one temporary) are responsible for storing the 428 buses on the TBM network. The size of the equipment goes from the articulated bus (18m) to the van for PMR. The future depot should accommodate at least 100 buses. The depot will also include a workshop and offices, on a footprint of approximately 2000m². No bus line is specifically dedicated to Floirac, but a hierarchy exists between the lines that cross the metropolis (lianas) and the proximity lines (line, corol, flexo ..). To this is added the project of Municipal Technical Center of the city of Floirac, which must be able to accommodate - staff offices and a meeting room - workshops (painting, electricity, locksmithing, plumbing, carpentry, mechanics, storage ...) - a shop (tools and supplies) - outdoor storage - parking for staff and rolling stock

Is it finally planned that the tramway crosses the Garonne via the Simone Veil bridge?

This is not the tram but a high-level service bus line, called the "bridge-to-bridge" line between the Jacques-Chaban-Delmas and Simone Veil bridges. The structure of the bridge is designed to accommodate a tramway type infrastructure, but these developments are not envisaged in the medium term. See the report of the site visit and https://www.bordeaux-metropole.fr/News/Les-deplacements-metropolitains-en-2025.

During the April 11th visit, there was some recent data on the IRPP: could you update the latest information?

The revision of the PPRI (Flood Risk Prevention Plan) has not been finalized to date. The most recent hazard maps (January 2019) show that the RTE / EDF property and part of the business park Jacquotte are impacted. Constructibility is possible within the framework of an overall plan by resorting to management methods and Resilient construction by promoting hydraulic transparency. For new constructions, the PPRI requires that the first developed floor be located above the coast threshold.

Refer to document FR-FLOIRAC-PS-M05 added to the site file:

- the hazard map makes it possible to assess the constructability according to the level of risk (weak, moderate, strong, very strong); the precautionary band is inconstructible.

- the map of the thresholds indicates the level to be respected for the first floor.

Would it be possible to have more information on the two major urban operations that adjoin the site:

Could you detail the needs of Companions (relocation / development, in terms of programming, surfaces, specific constraints ...) ?

The Companions of the Tour de France are working on a project of densification of their plot including: - The relocation of the accommodation offer currently on Bordeaux - A range of inter-company catering - Rehabilitation of training and practical teaching premises - The realization of a cultural space, place of exhibition of the know-how of the Companions The Companions project can be integrated into the overall project but is not included in the Europan project site

What is the current situation of the Bel Sito project? What is its legal status and what program supports the town hall and / or the metropolis on the Chemin de Beaufeu?

The site belongs to a private owner. A project is in the process of reflection, not validated at this stage.

What is the detailed program of the J3 block of the Quays ZAC? Who is the developer or promoter?

Bordeaux Métropole, developer of the ZAC, will soon launch a consultation on the island J3 (excluding the Europan project site) exclusively for economic purposes. The program and the operator are not yet known

The new buildings on Gaston Cabannes Avenue, that is to say the tip of the building, have not been identified as such or absent from Google Maps.

Can you give us their templates and the location of these buildings?

If you're talking about buildings north of the Point P building, it's a private office operation.

The footprint of these buildings is visible on the last aerial photograph of Google Maps.

The BME is the office in the ZAC Garonne Eiffel. What is the floor area of ​​these offices and what types are they? Why were the surfaces not reserved in the Docks ZAC, island U1, U2 or J3, K?

The Colas group is currently present at two sites in Floirac: on the one hand, on the BME site (a Group of Economic Interest owned 70% by Colas), and on the other hand, on the ZAC Garonne Eiffeil (161 Bis rue Emile Combes). The floor surface of the Emile Combes site is not known to us. The group plans to consolidate its two activities on the same site, and has not made the request to relocate in the area of ​​the Quays ZAC